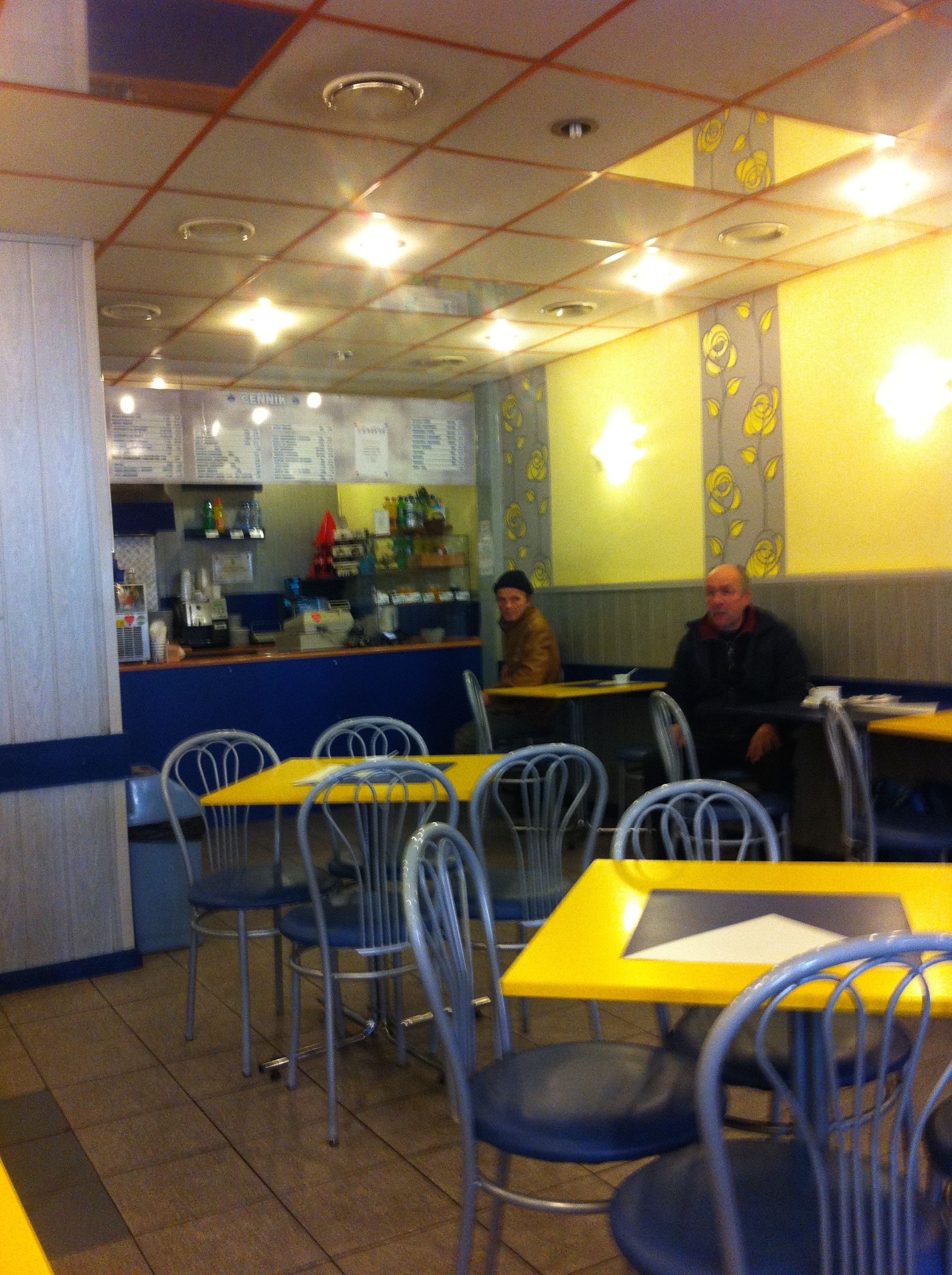 Wraiths of the Milk Bar

We walked into the doors of the milk bar (bar mleczny) and immediately felt like we’d stepped back 40 years to when Poland quivered under the glare of the Soviet Union and these state subsidised dens were the only places honest people could afford a meal out.

Somewhere between a soup kitchen and workers canteen, the milk bars are a communist institution clinging to relevance in the 21st century. Tourists don’t go there because no English is spoken and the battle scarred clientele and dim windows scare away all but the most hardened locals.

Inside it’s half classroom, half hospice. The frail metal chairs and plastic tables would be cheerful if it weren’t for the yellow of the walls, the sad plants moping in the corner, and the thin, reluctant lighting. Overall you get the unsettling sense of something no longer of this world, as if you were in the bedroom of an old relative who had recently passed away.

The lady at the counter was surprisingly polite as I stumbled my way through a simple order of Zurek and Russian Dumplings with my amateurish Polish; milk bars are famous for large menus but small supplies, and sure enough they had only one bowl of Zurek left, so we made do with a bizarre soup of meat and potato which tasted dusty and forgotten; I was later told that this “Grochowka” is an old military dish best reserved for retired generals and alcoholic recovering politicians.

Seb and I sat in a small table by the door chewing on our pierogi and soup and watching the crowd. It was obvious – with our upturned collars and leather shoes – that we were awfully out of place. In order to observe something you have to change it, and we were the only entities that ruptured the aesthetic consistency of the canteen.

Everyone else positively creaked with history as they walked in the door. An old man with a white moustache and almost platinum, pale hair wore a worn blazer and stood staring at the menu for several minutes before ordering. A man in a dingy yellow leather jacket sat at a table by the counter staring at us. He had no food before him, his deeply lined face was was devoid of aggression or curiosity.

At the wall opposite us a young women sat next to a rough, stinking homeless man who looked like he’d just crawled out of a sewer of vodka. She may once have been pretty but her face was swollen and rough. She spoke intimately with the man opposite her and glanced around shyly. One of her eyes had recently been blackened. Another old man with a leather jacket came in bringing with him an even sharper stench. He had wild, wiry white hair and foggy glasses. He too stared at the menu for several moments before ordering the same watery tomato concoction that everyone else seemed to be eating.

Two young men, early twenties, sat behind us, eating with serious concentration and neither chatting nor making eye contact. A man was there with his young daughter, roughly dressed but they seemed cheerful, chatting softly to each other and smiling.

They were all part of the walls, fixtures of the milk bar. They made the scene and were one with it and without them this place would just have been a grimy canteen somewhere by the old square. They seemed determined to play their roles with utter precision; none acted in anyway to break the illusion of the room. No one brandished a cellphone or wore clothes that would have bene out of place in a communist film set in the ’60s or ’70s. None spoke too loudly or acted too wild. All were wraiths of the milk bar and belonged there as much as the soggy pierogi and wild haired matron behind the counter.

The two foreigners sitting near the front took their dirty dishes to the tray near the back and then filed out into the sunshine. We wandered past busy bars and modern restaurants towards the glittering town hall in the old square of Poznan. Young people spoke on smartphones and BMWs raced down the streets. But all that stays outside the milk bar.

Now that we were gone there was nothing left inside to remind the wraiths of the bar that it was in the 21st century, that communism had left this continent. The jolt of stepping back into the modern world from the time capsule of the milk bar was similar to the feeling the traveler gets after walking off a long flight into a strange, faraway country; the contrast making the experience seem even more surreal.

Behind those thin glass doors a strange country lives on, as out of place on the crowded streets of modern Poland as us two foreigners were inside.