A night train from Yangon to Mandalay provides a snapshot into how it feels to travel in Burma / Myanmar in 2016 as the country prepares for a tourist boom.

Interested but don’t feel like reading? I’ve recorded an audio version of this post for you to download or listen online. It’s identical to the text below, but a bit easier on the eyes. If you choose to listen, I suggest you still have scroll through the text below to see photos from the journey. Download Here.

We knew that we’d made a mistake and we were going to have to pay. We’d entered the station far too hesitantly and looked foreign enough to start with, two blond haired tourists wandering around Yangon Central.

People in various states of dereliction sat on the dusty grey cement outside the entrance under the billowing Myanmar flag, spitting red mouthfuls of betel in front of them which stained the ground like dried blood.

The moment we walked inside a thin man in a frayed, torn uniform leaped up and unctuously examined our tickets. He grabbed one of our bags and lead us briskly towards the crowded waiting room, where he pointed out a seat. We still had an hour or so before the night train to Mandalay, so he left us to wait.

It was hard to tell whether or not he was a hustler or a station employee, or somewhere in between. His shirt looked as if it may once have been a uniform, and he certainly acted at home in the dirty, dark station. 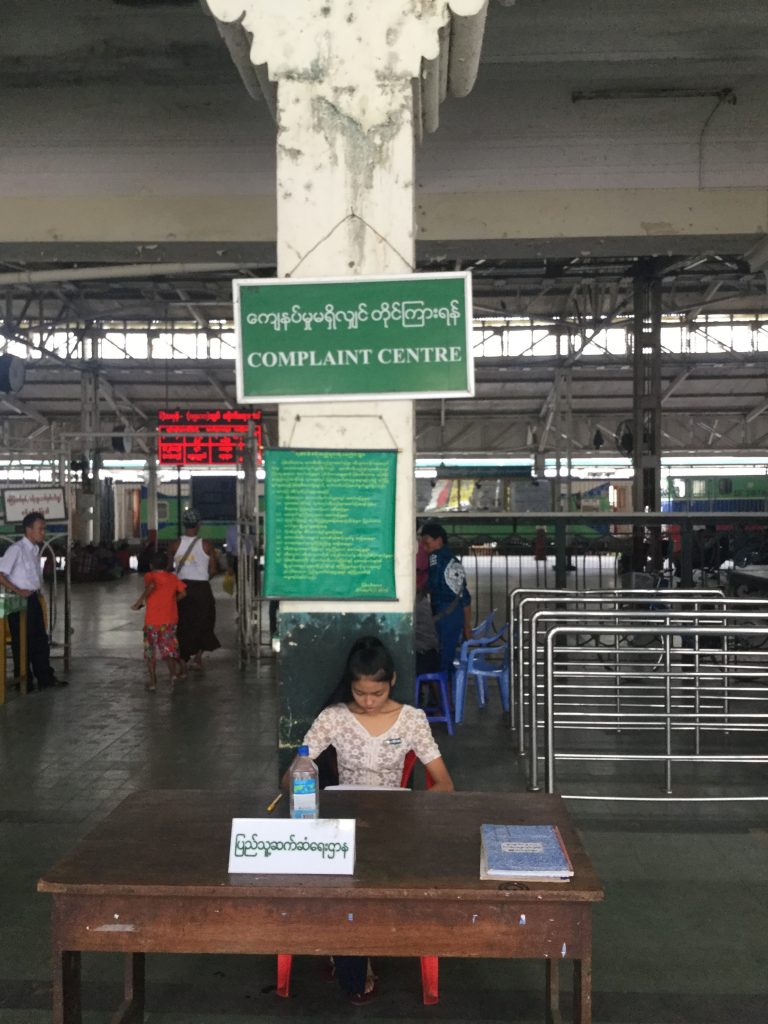 A dog was padding about cheerfully on the station floor, winding its way in and out of people’s legs. Most travelers ignored him. A group of youngsters were crowded around a mobile phone charging station which appeared comically out of place inside the old fashioned, crumbling building. Some read newspapers. Others simply stared straight ahead.

Photos on the wall showed their newly empowered leader and hero of the nation Aung Sang Su Kyi greeting foreign leaders, including China’s Xi Jinping. Signposts in English implored staff to “Warmly Welcome And Take Care of Tourists.” Perhaps our enthusiastic station guide was simply following directives from above.

We saw him again before our train arrived, pushing an enormous luggage cart containing not only suitcases, but also a thoroughly grumpy looking middle aged Burmese man. Two bored looking young men ambled beside him, sipping on iced teas. The station man deposited his cargo right in front of our seats, glared at us and said ‘wait here please’ and then disappeared.

Our train showed up about half an hour later. We stood up, grabbed our bags, and were about to make a beeline for the platform when the ‘guard’ appeared. He snatched Jolene’s bag out of her hand, and pushed through the crowd, getting us onto the train first, and showing us to a small, filthy cabin. He handed back our luggage. We thanked him, and waited for the inevitable.

“Money,” he declared cooly, as if stating an irrefutable fact.
I’d been prepared for this, and had extracted about $1USD worth of Kyat from my wallet earlier.
I handed this to him.
“No – 5000!”
We talked him down to 2000 – still a good windfall for him – and he left to find another person to ‘help.’ 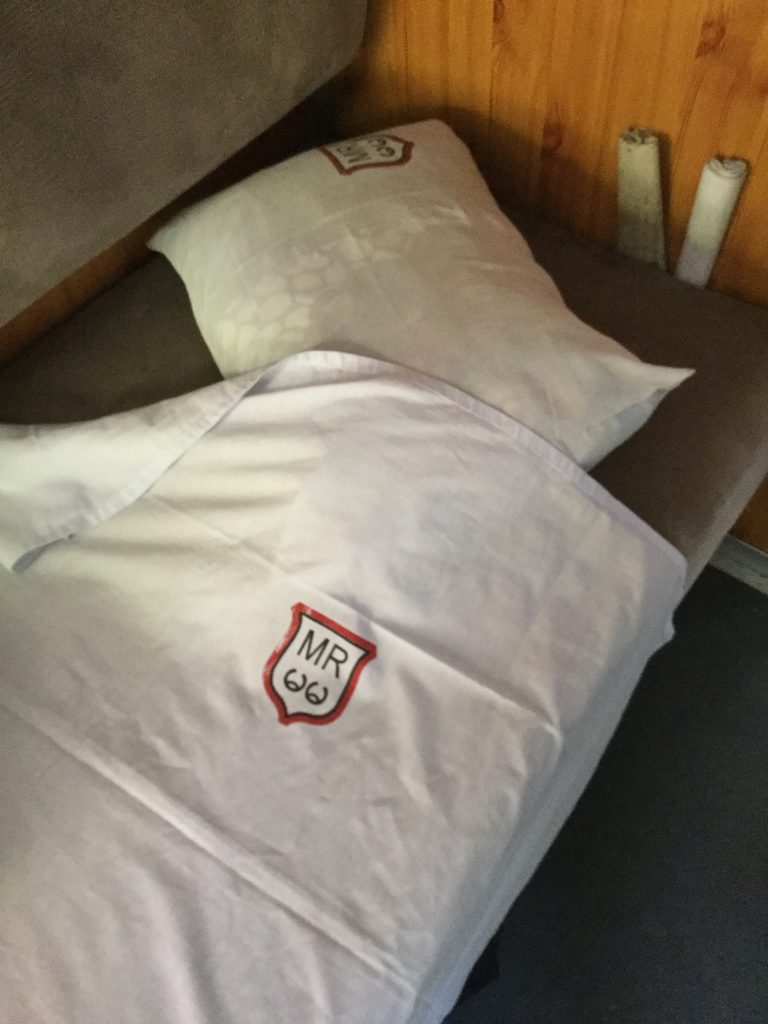 We were just getting settled into the cabin when the hawkers started filing through the corridor, shouting in sing-song Burmese and occasional English. ‘Water! Water!” Amoung them, I heard a hoarse, child’s voice which sounded familiar… “Water! Water!”

An unkempt girl who can’t have been more than 10 or 11 years old poked her head into our cabin.

She had recognized us from the city circle train, an urban route that we’d hopped yesterday for a DIY tour of Yangon. She had been hopping on and off the trains selling her bottles of water – without much luck, it seemed – and had spent a good 2 minutes convincing us to buy a bottle. We were already laden with supplies, and so had refused. It seems she still wasn’t over it.

“Hi…” I said, cautiously.
“Circle Train!”
She yelled again
“Water! Yesterday no buy water! Today?”
“Sorry” I told her, pointing to the two enormous bottles we had packed for the journey, “Already have.”
“Yesterday no water! Today no water! Circle Train!”
She stood, glaring at us furiously.
She started coughing dramatically, without covering her mouth, but stopped after a few seconds, half smiling as if she knew that this one wasn’t going to work. She continued to glare at us. “Water!”
“No thank you.”
As she had on the Circle Train train the day before, she started babbling away rapidly in what may have been Burmese, no doubt cursing us with all the words in her vocabulary. After a couple of minutes of this, her furious stare all the while unbroken, she groaned and stomped away. 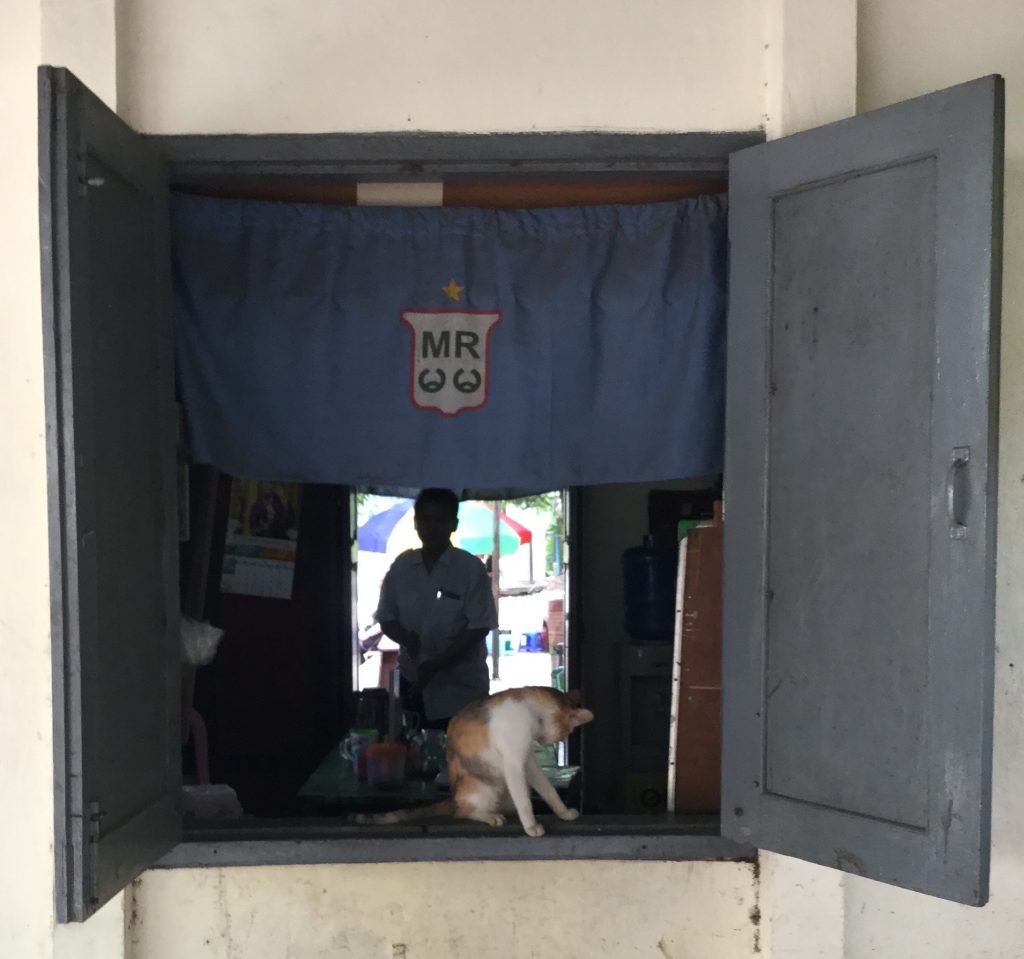 A Cat Guards a Circle Train Ticket Booth in Yangon

We closed the door and started trying to make the beds, when she reappeared. She had left the train, walked over the tracks, popped up in our window.

“Water!”
The scene from the door repeated, with her leaning as far as she could into our cabin, until the conductor arrived with another couple of foreigners, and she finally scarpered.

Our roommates for the night were a 26 year old black haired, unshaven American named Dolton, and his quiet Vietnamese girlfriend called Laura. The train started rolling and most of us turned to gaze out of the window. Except for Laura, who promptly went to sleep.

The grimy suburbs of Yangon swept by. There really was a staggering amount of trash wherever you looked, but the lively urban scenes made up for it. Every second was a new soap opera. 20+ people precariously balanced on the back of a small truck. A mother and her small baby on a motorbike, both of their faces thickly coated in the same yellow white substance people wear all over the country.

And then, with almost no warning, the city was gone, and we were in deepest country. Flat and unbelievably green fields stretched off into the horizon. Occasional houses dotted the landscape, and solo farmers stood amongst their crops.

As the sun began to set we moved out to the corridor to get the best view. Kneeling on the hard floor we had to move every 20 seconds or so to let another hopeful hawker hustle by. One selling cigarettes. One local whiskey. One sinister looking chicken kebabs, another brightly colored towels.

It was worth it for the view. It isn’t the orange of the sun itself which makes for a spectacular Asian sunset, at least not at this time of year. It is change the setting sun brings to bear on the horizon. The light blue of the sky darkened gradually, and rich green of the fields softened. It was as if ground and sky were slowly blending into each other, every moment striving for a deeper shade of blue. And then it was dark. 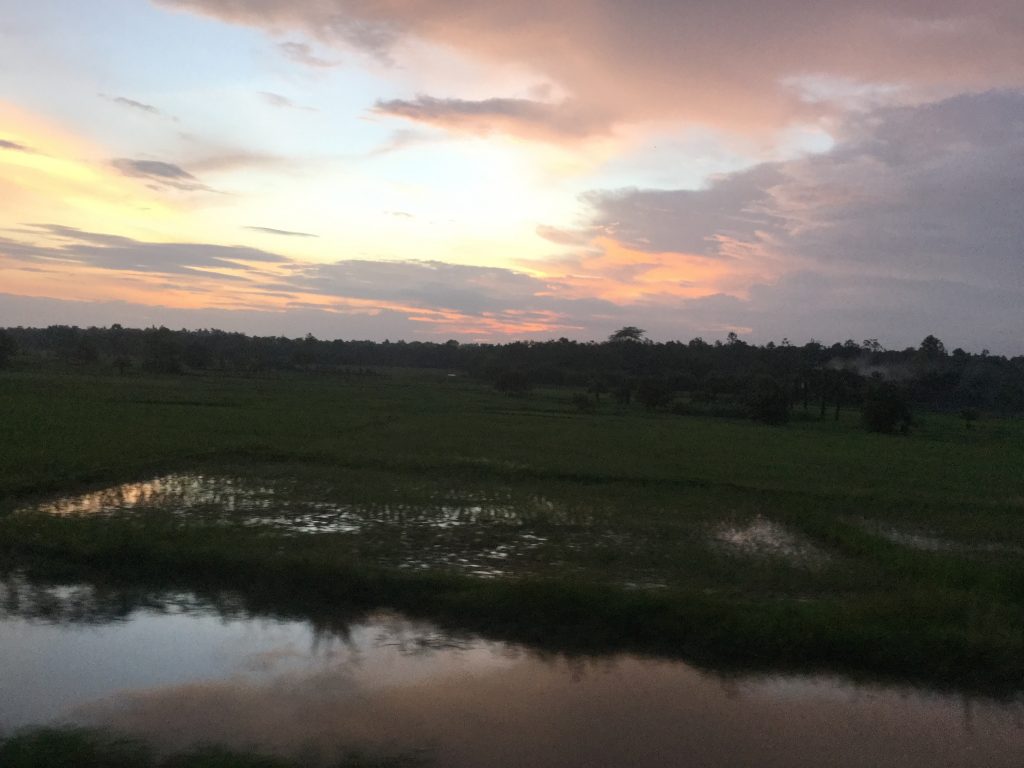 We returned to our cabin, but I wasn’t ready to sleep. Bouncing off the walls and bracing myself against the brutal rocking of the train, I set out for the dining carriage in search of beer and adventure.

Neither were hard to find. Small, brown, plastic chairs were screwed to the floor around white tables in a dimly lit carriage. Burmese men were smoking cigarettes or chewing furiously on betel, mercifully spitting their mouthfuls out the window. I ordered four beers, and took them back to the cabin.

The four of us drank and chatted. Dolton and Laura had been traveling together for several months. They’d saved up the money whilst teaching English in South Korea. Laura was born in Vietnam but grew up in the United States. She spoke fondly of her motherland, but not so fondly of her neighbors.

“Whenever we go back they always ask for money,” she said.
“They think that everyone who lives overseas is rich. My uncle showed me the road in our village and said ‘why doesn’t your Dad pay for us to have a new road?”
“Every time we come back, someone gets sick and we need to pay for their medicine. My Dad says they are making it up to get our money, but we pay anyway. My mum says we don’t have any choice.”

When the conversation lulled we stared out the window.

It was pitch black, but every now and then a golden pagoda would appear illuminated in the distance, shining out of the darkness.

Laura wanted to sleep, so the three of us moved to the dining carriage and took a table by an open window, breathing in the humid but pleasant night air. Then the conductor told us something terrible:

They had run out of beer.

They promised that they would buy more at the next stop, but we had no idea where this would be. Dolton was anxiously checking the map on his smartphone, saying the name of each tiny dot on the map as we flashed by. After about half an hour we stopped in some tiny town with a long, impossible name.

As in all stations we’d passed, it was not so much a railway station as a local community center and market. Identical stalls were set up a couple of meters apart, selling soft drinks, cigarettes and magazines, and vendors prowled the platform in search of customers.

Beer arrived, and when we asked for a second round each the conductor handed over the cold cans before unceremoniously evicting us from the dining cart. “I want to sleep” he said, pointing to his chair. It couldn’t have been later than 8’o’clock.

Back in the cabin Laura awoke, and we chatted away with the door partway open. A vendor walked by, and ingeniously guessed at our needs. He proffered us a bottle of ‘Myanmar Whiskey’ which an expat friend of ours in Yangon had assured us was perfectly safe and actually pretty good, but which had seemed like a terrible idea just a few hours ago.

The whiskey tasted no worse than most cheap western brands, and we made a respectable dent in the bottle before settling down to sleep. It had worked its magic, and I awoke clear eyed just before down the next day to find myself on the fringes of Mandalay, having slept through the hysterical bumping of the train.

All four of us hastily packed our bags as we came to a halt at Mandalay station. Eager taxi drivers had already crowded the train, having spotted the only foreigners on board. It was time to go. We bade farewell to Dolton and Laura and wandered off into the new city.

We had shared with them deep conversation, bad whiskey, and the night train to Mandalay, but hadn’t swapped contact details. It wasn’t a snub, it was simply the way things sometimes work when you’re on the road.