Among The Tuna Merchants: Pre-Dawn at the Osaka Fish Market

By Nathan James ThomasApril 7, 2017Stories from the past, Travel journal
No Comments 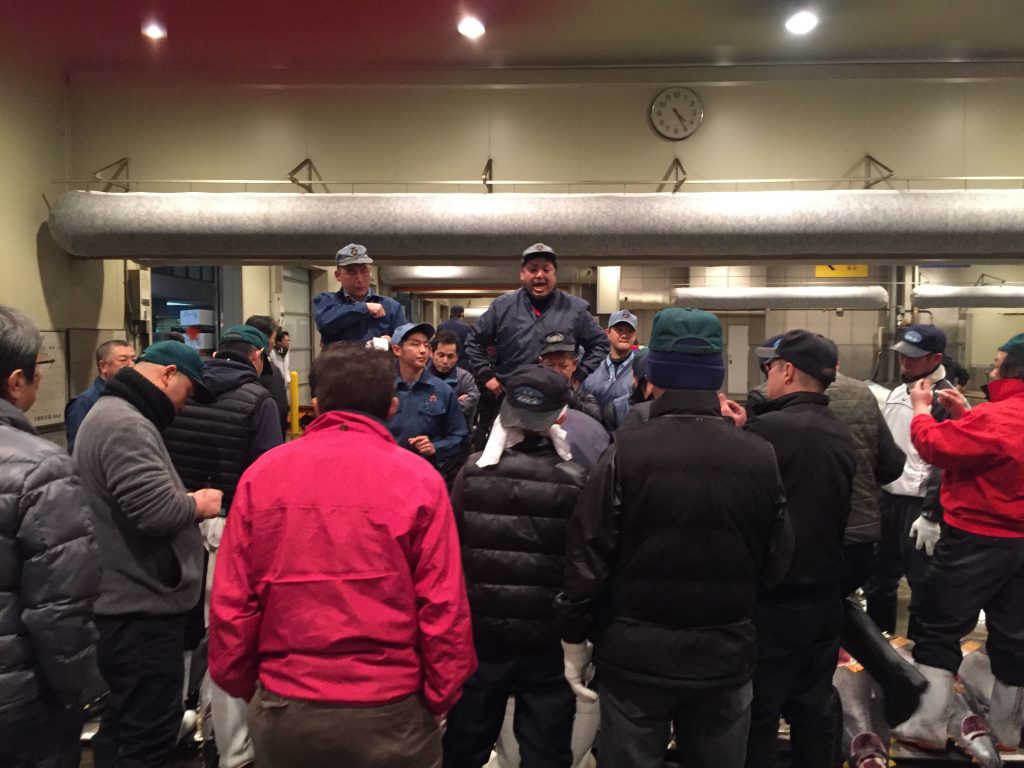 You’re in a cold warehouse about the size of your high school gymnasium. It’s still dark outside. Enormous tuna fish lie in rows in the middle. They are whole but are missing their heads. A small slice of flesh has been cut from the tail of each, and placed beside it. Signs in Japanese give the origin. This one from Taiwan. This from China. This from Myanmar.

All eyes are on the auctioneer. He sways his body rhythmically as he shouts. Half grunt, half growl, an atavistic shriek, called in this way for centuries. The merchants raise their hands to claim a catch.

It’s pitch black outside. Dawn is only an hour or two away, and you haven’t slept a wink.

And all of this, because of sushi.

Here’s what went down:

We were at one of the these incredible sushi train places in Osaka. You sit, the fresh seafood zooms its way to you on a conveyer belt. You eat until you can eat no longer. Then you rest, have a beer, and eat some more.

Beyond the salmon, the crab roe, the salty mysteries of the sea, there is one fish that stands above all others. Tuna. Not the horrible tinned stuff you get at home, but fresh and, most importantly, served raw.

After eating our second our third kilogram of this glorious fish, we started to wonder… where does all this wonderful sushi come from? I mean, obviously it comes from fish, which come from the sea, but there’s surely a couple of steps between sea and plate that we’re missing out on.

To find out, we decided to head to the Osaka Central Fish Market, and witness their famous – yet seldom observed by tourists – pre-dawn tuna auction. It begins most days at 4.15AM sharp.

Being a writer, the prospect of getting up at this hour was akin to becoming a tea-totaling vegan for a year. Not gonna happen. So, we did the logical thing, and decided to stay up all night, carousing the midnight streets of Japan’s grittiest city until the bells for the auction were rung.

A sports bar was empty except for an old man who kept hollering at the bartender. He repeated the same two phrases. Ichiro and Aishiteiru. I learned that Ichiro is the name of a famous Japanese baseball player, who the old man clearly thought resembled – or perhaps was –  the bartender. Aishiteiru means “I love you.”

We wandered down the street past a santa-claus themed ‘Love Hotel’ where couples rent rooms by the hour. Past closed bars and open restaurants, under the strange symbols and neon lights. We took shelter in a clean, well lighted cafe, ordered warm sake, and waited for the auction to begin. 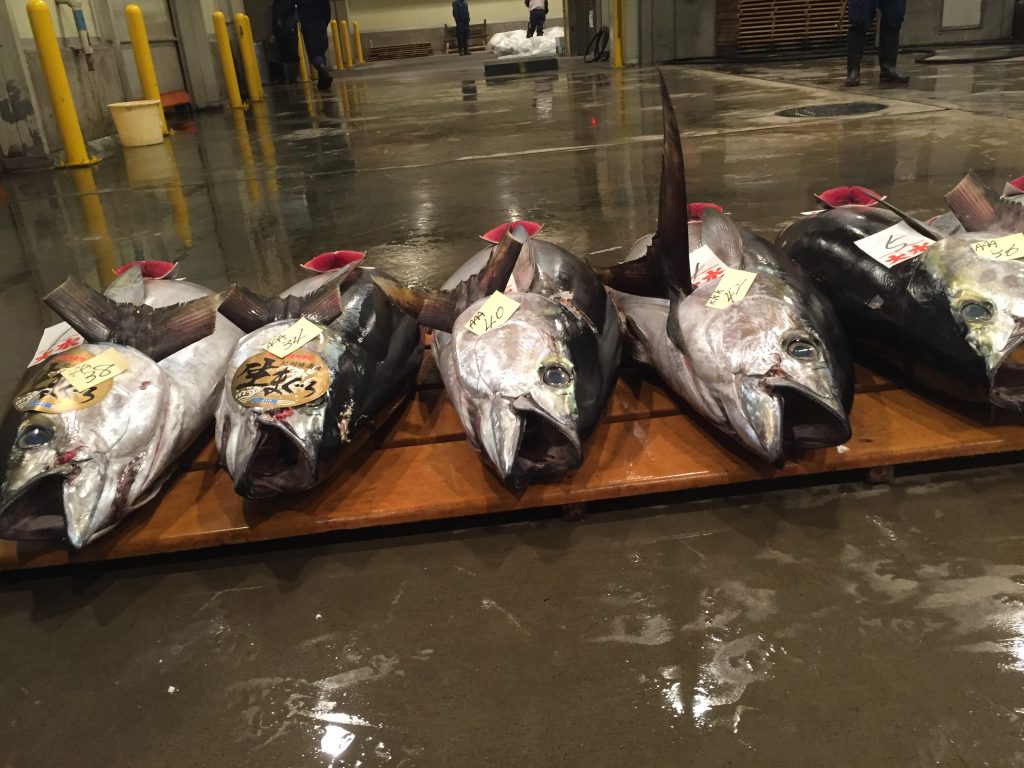 The taxi dropped us off on the outskirts of the market. We followed the hum of machinery, and walked in the wake of a chairlift carting a sinister looking tank.

The main auction was over quickly, and afterwards we wandered into the main hall of the market. An electric blade sliced through the flesh of an enormous frozen tuna. It was still dark outside, but artificial lights clunked on and illuminated a football field sized world of fish.

Other auctions were happening in the distance. Groups of men clustered around auctioneers who stood on stacked crates, selling mysterious, many-legged creatures from the depths of the ocean.

All this was starting to make us seriously hungry. It has just gone 5.30, and the market’s official sushi shop was just starting to open its doors. We were alone in the restaurant apart from one, seemingly drunk local. He offered us a lift home a bit too insistently. So we decided to walk to the metro station.

The streets outside the market were still dark. Traffic moved slowly. The metro station was down a steep hill, and red lanterns shimmered in the dark. When the train emerged at our stop, dawn had done its thing and the light was harsh and blinding. It was time for bed.