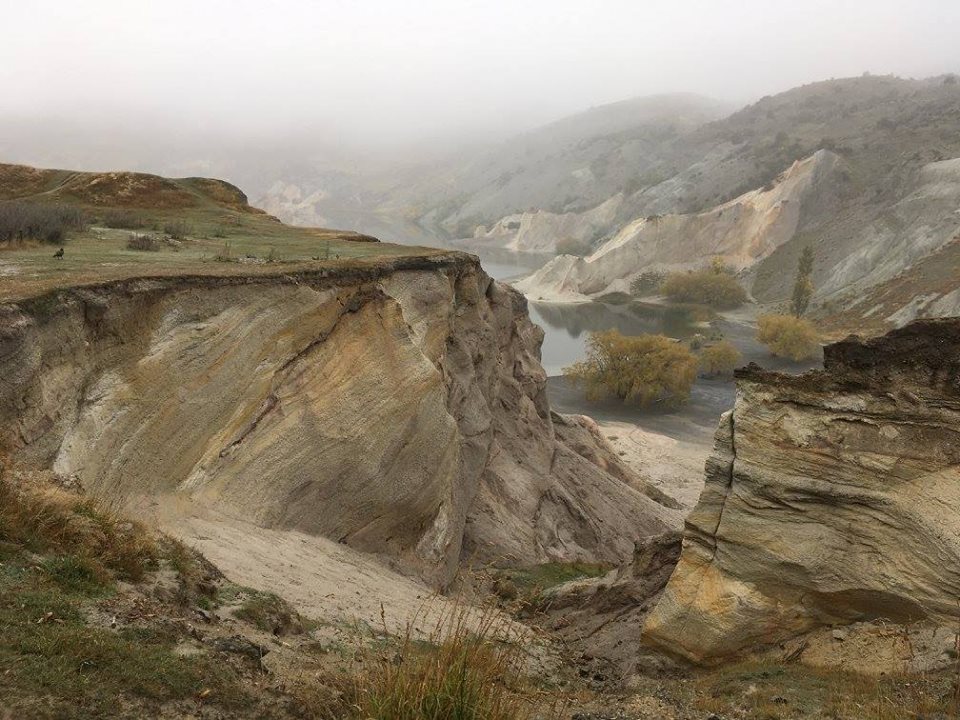 Driving through Central Otago is like strolling through one of the great art galleries of Paris. Confronted by extreme, intricate, subtle and magnificent beauty that shifts and changes with each step, you can you choose to feel either invigorated or exhausted.

The cure for either of these conditions is Middlemarch. I refer not to the novel by George Eliot, but to tourist town in the Strath-Taieri valley. The population briefly doubles a few times each week when the Tairei Gorge train arrives from Dunedin. A couple of hundred tourists alight from the bright yellow carriages and stumble across the tracks to the pub.  An hour later they squeeze themselves back onboard for the return journey, and Middlemarch resumes its slumbers.

A few of the more adventurous visitors wander around the corner, past one story bungalows and curious sheep, to the Middlemarch Museum. Inside the museum are old photographs, saddles and pieces of  retired farming equipment. But outside is something really quite strange and extraordinary. A small submarine, built in 1874 to mine gold in the Clutha River.

The “Platypus” survived a trial run back in the 19th century, but the money ran out and it was never put to work. It lived out its life gathering rust on the Dunedin wharf until after the First World War, when it was taken to a station near Middlemarch. More recently, enterprising folk tracked it town and installed it at the museum.

Sadly the Platypus is incomplete. Its abdomen, the barrel shaped middle section, has long since gone missing. A volunteer at the museum told me that she suspected it was currently being used as part of a soap factory in Dunedin. (I feel the pun ‘Soap-marine’ is begging to be deployed, but I shan’t sink that low.)

101 kilometers north of Middlemarch is the old mining town of St Bathans. Upon entering the settlement you feel, for a moment, as if you’ve stepped right off the planet. Thick clouds hang over an erie moonscape. A crater, filled with still, blue water. A few small shrubs, the odd lonely bird. And silence.

The Kildare Hill once stood on this spot. Then they found gold, and started to dig. Even with 19th century technology, it took less than 30 years to transform the 120 meter high hill into a 60 meter deep crater. Water seeped into the empty space, and the Blue Lake was formed.

Not a lot goes on in St Bathans these days. The old jail is now a cute boutique hotel, complete with ball and chain. The Vulcan Hotel, down the road from its original location, has reluctantly remained open. So we went in for a pint.

A large man sat unsteadily on a stool by the door. It seemed as if he had been sitting there for decades, watching the hill crumble into the ground, a throwback to the days of thirsty miners and exhausted horses. The fire crackled that in the corner was small, yet the room was sweltering. Like any old, rural New Zealand pub, there were photos of All Blacks on the wall, and decaying trophies from last century’s tournaments.

The man on the stool swiveled his swollen eyes in my direction.
– “It’s a panda!” He had noticed my companion’s panda hat, an acquisition from Chengdu.
– “A panda hat” I replied, not being opposed to absurdity, but also not wishing to encourage someone quite so sloshed.
– “I used to hunt pandas. He said, cooly, “in China.”
– “Oh.”

We took our drinks outside, crossed the road, and perched across from the lake. It was dusk and it had grown cold. Beneath the gathering fog, the lake felt alien, a manmade crater vanishing into the darkness below.