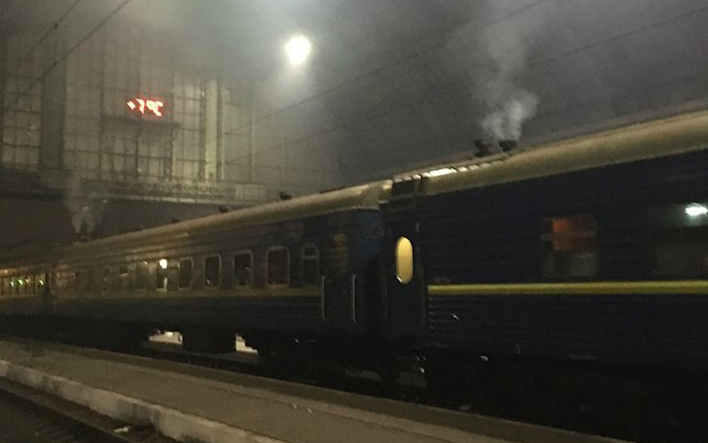 How to Get a Meal in Kiev

Kiev’s metro makes little sense. Below the main railway station commuters are funneled through an impossible labyrinth of white concrete tunnels, ending in a junction where you are forced to make a life or death decision: do you turn left, or right?

The stop to which you have been directed is on neither map for either line. You look around at the hurrying commuters, seeing if anyone seems friendly enough to ask for directions. You try to conjure the Russian for “I’m looking for such&such stop.” And then you glance once more at the map. Your stop is there! Hidden under the much larger text of the stop above it. Cunningly disguised. Placed on the map thusly merely to annoy the wearer traveler. You turn left, and trudge onwards.

The train from Lviv took close to six hours. Pulling out of the origin station, the chimneys gusted white smoke which brushed the low, iron ceiling. The subway to your stop in Kiev takes a mere 15 minutes, but it feels like the longer of the two journeys. Commuters jostle and push, and all seem to be wearing the exact same outfit. Men in thick, black leather jackets, and dark, low hats. Old women all in grey. Young women dressed in black, like the men, their eyes thickly made up with dark mascara.

A Herculean quest awaits you when you emerge into the wide open space of Maidan square. Illustrations of barbed wire scream down at you from the high stone walls opposite, as all around you giant posters of Ukrainian soldiers glare defiantly towards Russia in the East. But your quest is not to defend the homeland. It’s to acquire one – for the next few days at least.

Your AirBNB host has left you a complicated series of semi-literate instructions. First, there’s a visit to a mysterious apartment complex, and frantic half-Russian half-English negotiations with the suspicious receptionist. Then she hands you the keys. You ask “where do I go now.” She shrugs, and hustles you back out onto the street.

Near Maidan square is a site more alarming still than the 2-dimensional soldiers, painted barbed wire, or menacingly swaying derelicts. No, your eyes do not deceive you, and your cyrillic really is getting pretty good: it’s a 24 hour sushi shop, some 833 kilometers from the Black Sea. Tempting, but you think you’ll pass.

When finally you find your apartment, check in, wash the soot and smog off your face, done clean(ish) clothes, and prepare to head out for dinner, it’s after 10PM. With work meetings looming large the next morning, a night of revelry is strictly off the menu. No, a brief stroll past the lustrous, domed St Sophia’s cathedral, and around the block in search of a quick, cheap hot meal. But it could never be so easy.

The affluent streets around St Sophia’s Cathedral are lined with upmarket clothing stores, guarded apartment blocks, and stores selling watches, luxury goods and jewelry. The road winds down a hill, and St Andrew’s Cathedral suddenly appears from the dark. Illuminated by floodlights, it shines ghostlike against the black of night. Climb up the stairs to a nearby park, and you can see the whole church, perched on the edge of the enormous hill, the dark, restful city barely glimmering far below.

Proud of yourself for forgoing hunger long enough to take in a bit of jolly significant culture, you press on. The streets twist around the church past tourist shops and wow, finally an open restaurant. However the sign in English reading “Authentic Ukrainian Cuisine” and the surly waitresses glowering over empty tables do not bode well. You amble on, the road taking you ever further down, the park to your left, the cliff edge to your right. Zigging and zagging with aching, hungry legs you find yourself on something more akin to a main street, And here, finally, you have your prize.

Down a darkly lit staircase, merry voices ring out from what a British observer would no doubt label a pub. An English menu was summoned, and empty table located, a pint pured, and some borsch – sweet beetroot soup with sour cream – and sausages ordered. You take out your book, and settle in for one of the more enjoyable treats of solo travel – a pint, a book, and a hot meal on its way, all for barely the price of a cup of coffee at your local Starbucks back home.

And yet the loud voices from the adjacent table keep rudely interrupting your relaxing ruminations. Four young men are sitting around an epic array of winking and shimmering glasses – pint glasses, shot glasses, flasks and jugs. One, with a thin face and coal black hair, is growing louder, gesticulating passionately. More shots are called for. “Na Zdorovie!”

The man continues his rant as, one by one, each of his companions gets up to shuffle to the toilet. They pass your place in turn, and stare in curiously at this oddly dressed (by local standards) individual, sitting alone, reading a FOREIGN book, and looking rather too comfortable.

Finally it is the turn of the loud, black haired man to go to the loo. He glares curiously at you on his way there, and on his return can hold his astonishment in no more. In slurred, heavily accented English, he asks: “Who you come from?” “New Zealand,” you reply. “Who?” “New Zealand.” “How you get here?” “By plane.” “By plane!” “Yes” “And how long it take?” “About 30 hours.” “Wow!” He returns to his friend. Another approaches. The same conversation repeats. Eventually you are summoned – insistently – to join their table, and fifth shot glass and further flagon of horseradish vodka is called for.

After perfunctory introductions and a few shots of the pungent, spicy, burning liquid, the dark haired man launches back into his story. But this time, for your benefit, he speaks in English, and takes great pains to explain the context. The gist is thus: the black haired fellow and possibly a couple of of his gentlemanly companions are in the building trade. Somehow, through piratical intrigue which he did not explain in detail, several thousand dollars worth of his building materials were stolen from the port in which they had docked, and taken by sea to Turkey.

Furious at the theft of his materials, my interlocutor had made various inquiries through his underground contacts, and finally ascertained the whereabouts of the stolen goods. Hopping the next ship to Turkey, he tracked down the perpetrators, and demanded an audience with the boss of the thieves. With much bluster, he insisted on the immediate return of all stolen materials. The boss refused. He made threats. They were ignored. Eventually, he agrees to buy back the very goods that were stolen from him in the first place. Claiming this apparent defeat as a victory, he returns to Ukraine triumphant.

As another flask of vodka is summoned and your head begins to feel light, you realize that you really must be going. Pretending to go to the bathroom, you surreptitiously settle your bill at the bar, thus clearing the path of escape. When the four lads totter upstairs for a smoke, you take your bag and join them. Once their cigarettes are safely lit, you make your farewell and slip away with full belly back into the Kiev night, and walk home under the shadow of St Sophia.