30.1 million people – greater than the population of New Zealand, Australia and Scotland combined. A city of skyscrapers erupting chaotically out of cloud strewn mountains like fungus on a tree stump. Former home of China’s mafia. Their matriarch, Xie Caiping, was said to have kept 16 young men as lovers. Gang trials, heading by governor Bo Xilai, brought down 9000 before Bo, a former commerce minister, was himself accused of corruption sent to life in prison.

Describing Chongqing to someone who has never been there is like trying to recall a feverish dream in the sober cool of day. Merely lifting your eyes from the cracked, slanting, grimy streets is enough to give you vertigo. Buildings in all manner and stages of construction hang over your head, connected by cranes, sky bridges and scaffolding.

And the people. Sinewy, shirtless old men with close cropped grey hair. Cigarettes dangle from their mouths. Either sitting on a staircase leering at the passersby or lugging boxes, buckets, food and building materials up the city’s many narrow staircases, bamboo poles slung across their backs. They are so called “bang bang army,” an aging symbol of the changing city.

The food reflects the city – overwhelming, chaotic, everything at once. The apotheosis of Chongqing cuisine is the hotpot – a overwhelming assault of spice, heat and flavor that I developed the taste for as a student in neighboring Chengdu in 2014. This time, I was accompanied by a friend, the journalist and food writer Thomas Heaton. We decided to find the same local restaurant that I had stumbled upon some years before, and brave the spiciest hotpot they would serve us.

We had no address. All I could recall was that the restaurant was near a certain Western bar, which we were able to track down online. From there, we walked up a winding staircase and found ourselves in an open air market. Well dressed women sat on small chairs and skinned live eels – or were they snakes- into buckets of water, their hands stained with blood. Chickens and geese sat glumly, their feet chained to the ground. The place looked familiar. Then I remembered – four years ago I witnessed an open air tooth extraction here! We were on the right path. 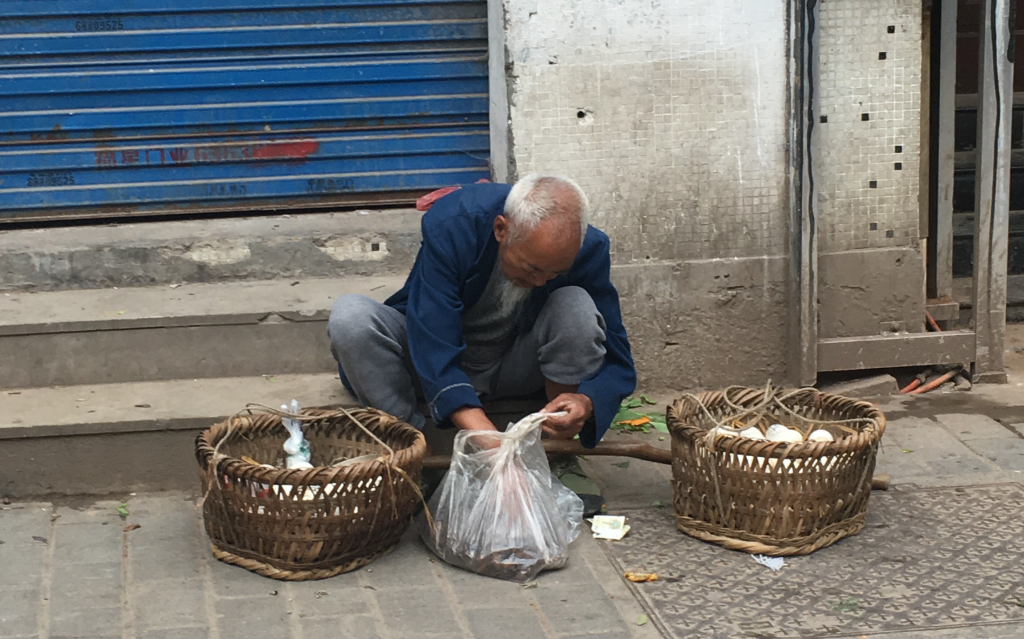 Left down a small ally and through the flower market, we found a cluster of locals sitting on plastic chairs outside a narrow doorway. We had found our destination. Taking a number, we acquired a beer from a local vendor (the label on mine was printed upside down), and sat down to wait until a table was free in the restaurant below. The locals shot us curious looks, but we were  used to that. Ignoring the stares, we focused on steeling ourselves for the meal to come.

Our number was up. Stepping through the door and down a concrete staircase, we immediately felt a rush of heat. The spicy fumes sting in the nose and had stained the walls a nicotine yellow. Groups of red faced locals sat around enormous, bubbling, steel bowls of oil, each one saturated with chilis and Sichuan peppers. Most were drinking beer from the bottle, some were smoking cigarettes between bites.

We ordered up a bowl of the hottest oil they could mix, and I went through the long menu and ticked off the limited number of items that I could read. A bowl of pigs brains (sweet and creamy), mushrooms, lettuce, frozen shrimp rolls, thinly sliced beef. In written Chinese, it’s sometimes possibly to guess at the meaning of a certain character based on the elements that comprise it, even if its unfamiliar. Using this strategy and crossing my fingers, I ordered up something that I thought probably came from the insides of a pig. We were not disappointed.

Here’s how Chongqing hotpot works: plates of food sit around the enormous steel bowl, which bubbles atop a gas stove in the middle of your table. Using chopsticks, you dip the food in the oil until its cooked. Then you bite. Then the room spins. The numbing, tingle of the Sichuan pepper, the temperature of the oil, the burn of chili, the fumes in the air, the MSG, the vinegar you use to dowse the flames, all combine to make your eyes swim, your head reel. Your drink weak beer after weak beer to stay sane, loving and yet hating every bite, persevering until, dizzy yet happy, you stumble up the stairs and out into the cool Chongqing night.

The next day, we awoke in our youth hostel atop a skyscraper, the brown Yangtze river crawling by 50 stories below. Our insides still burned. We felt as if we had participated not in a meal, but in a full on military exercise. We were physically exhausted. Summoning our resolve, we walked along the river to the point of the peninsula which makes up central Chongqing. The locals pointed and shouted at these two weary westerners, but we no longer felt like interlopers. We had conquered the spiciest hotpot the city had to offer. Surely that made us locals, at least for the day?

Thank you for reading this story on Intrepid Times, the online home for narrative travel writing with heart. If you’re looking to become a travel writer, check out our free guides, The Rejection Report and the Travel Writing Checklist.

A Broken Sandal and a Buddhist Funeral in...

Motorcycling from Hanoi to Ha Giang

At the Edge of the World in Siberia

On the Banks of the Perfume River

A Single Breath in Bali

Hung Out to Dry in Thailand