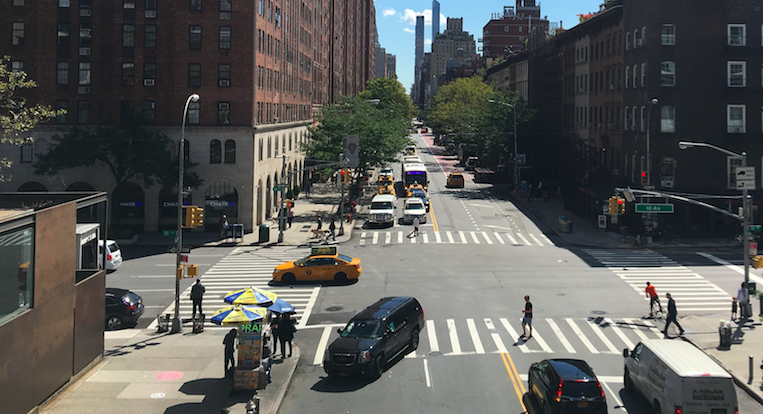 An Australian Traveler Encounters Everything that Is New York City

The millionth yellow cab tooted its horn and my brain throbbed ominously, as if moments from imploding. We had landed at LaGuardia just forty minutes earlier and I already wanted to crawl back to the departure terminal and catch the next flight anywhere.

I’d soon learn that beeping was an essential part of the New York City auditory landscape, but at that moment it was all too much. New York was sensory overload and for a jet-lagged traveller, it felt unbearable.

Eventually, our bags appeared on the carousel and it was time to venture from the safety of the arrivals hall out to the big bad city. Solo had become my favourite way to travel, but as I pushed open the doors and took in the bustling streets, skyscrapers and endless noise, I was incredibly thankful for the company of my parents.

“Come on, Em,” my dad said, gesturing to the cab they were loading the luggage into. One look at the driver’s scowl had me shuffling towards the vehicle; overwhelmed foreigners clearly weren’t his favourite passengers and I had a feeling we weren’t his first for the day.

The distant skyscrapers inched closer as we drove across the Robert F. Kennedy bridge, through Harlem and into midtown Manhattan. Indistinguishable spikes on the horizon became intricate edifices with unique designs. Somehow, the city managed to seamlessly mesh the old and the new into a landscape unlike any I’d ever seen.

By the time we pulled up to the curb on Lexington avenue, it was all I could manage to keep my eyes from fluttering closed. I dragged myself to the elevator, tried to ignore the smell of weed permeating from one of the rooms and collapsed onto my bed. I let the cushy waffle duvet engulf me and imagined myself sinking deeper into the mattress until the city chaos was just a memory.

But New York refuses to be ignored. The horns kept honking and sirens kept blaring. It didn’t care that I was tired. Each sound was the tick of a clock; a constant reminder of the short time I had to explore the city. I gave myself ten minutes to relax before using every ounce of energy I could muster to spring up from the bed.

“Come on guys, we have to stick to the schedule!” I clapped my hands to grab the attention of my weary parents. They looked at me with the same irritated glare. I pretended not to notice.

“I know, I’m tired too. I promise a trip to Starbucks will be first on the itinerary.” That seemed to mobilise them, and a short time later we were out the door again on our way to fifth avenue.

Despite the lingering exhaustion, my second encounter with the city was very different from the first. Sights and sounds that initially bothered me, instead made me smile. We wandered through the shopping mecca of Manhattan, shoved against crowds for a spot on the sidewalk and jaywalked like every other New Yorker. I was learning to appreciate the city for what it was: functional chaos.

Somehow it all just seemed to work. Walking down Broadway felt like a dream. I admired every building, taking in each unique architectural design. A stroll down just one street showcased so many different styles, from gothic to art deco and almost everything in between. The city screamed its history for anyone who cared to listen.

The people of New York seemed to emulate the same eclectic style that the city embodied. Some young girls draped themselves in gothic threads, while others strutted through the streets in stilettos that rivaled the height of surrounding skyscrapers. Men wore a mix of elegant street-wear and wildly colourful clothing. Though jarring individually, somehow the swirling combination of so many threads and styles seemed to work. Much like the chaotic streets, it just seemed right.

“Esther, darling,” an elegant voice sang out, “we’re going to be late if you don’t hurry up. We’ve still got five blocks.” I turned around and discovered the voice belonged to an elderly lady in high-fashion attire, and that Esther was a toy poodle in a Burberry coat that matched her owner’s.

Little Esther barked once in agreement and off they trotted down the street to their mystery appointment. Were they going on a doggie date? Or was their meeting of a more professional manner? I forced my feet to stay planted, despite my desperation to spy on the pair. New York City was the most incredible place for people watching and I could have written a dozen stories about the corner of Columbus Avenue and West 67th alone.

An enormous city can shrink you right down. It’s easy to get lost in the notion of being one miniscule fish in an entire ocean of activity. But in the case of New York, there really is a place for everyone. Whenever I felt the rush of the city start to overload my senses, I would take a deep breath and bring myself back to the present. Because it’s easy to panic, or to run away and shelter yourself from an unknown environment with so many variables. But letting yourself just be in the moment enriches the experience of travel. I chose to embrace it all.

Emma Calley is a travel and food writer from Melbourne, Australia. With one grandma who loved to write and another who loved to travel, the profession was a natural progression and one that has nurtured her passion for language and culture. When she’s not exploring, Emma spends most of her time studying Spanish and dreaming of the day she can hold a full conversation without the aid of a foreign dictionary.