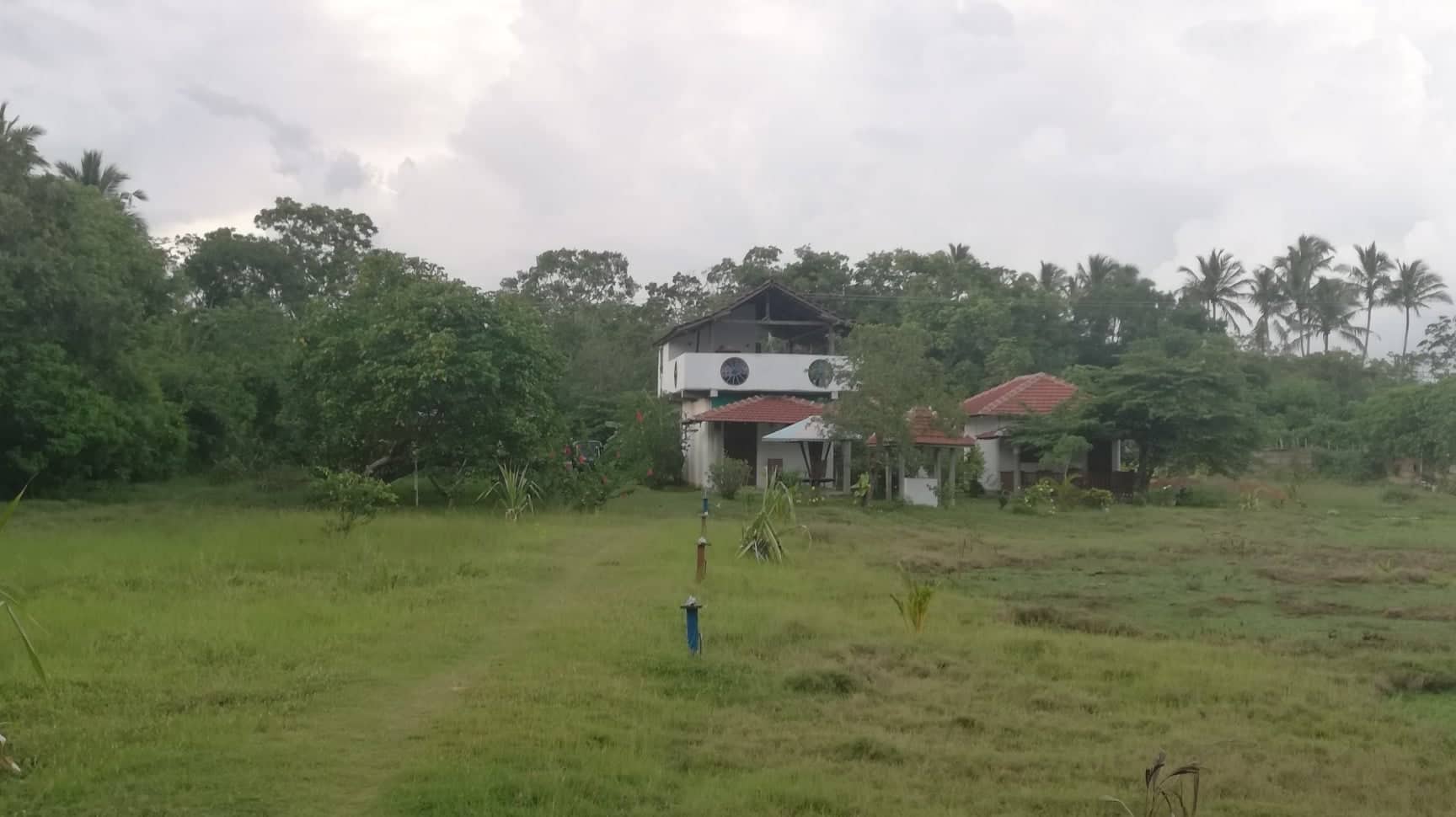 Over many glasses of Arrack, a local coconut based spirit, Thomas Heaton hears a firsthand account of how the 2004 Boxing Day Tsunami is still affecting lives on Sri Lanka’s coast.

Buttoning up his shirt, he walks up the stairs to find me sitting with a beer in hand. His name’s Shantha, the owner of the guesthouse in Ranna, near Tangalle in the south of Sri Lanka. Just 20 minutes ago he had greeted me with a confused look, shirtless with a weed whacker idling in hands. The arrival of a guest seemed to come as a shock to him, despite the fact that I’d booked in advance.

Sitting, guzzling my Lion Lager while it was still cold, he lit up a half-smoked cigarette. From the moment he lit up, I suspected it was something… else. When he offered the amber stub to me, I instantly knew.

“Sometimes, maybe. Later I will – if you have more,” I say, with no intention of lighting up. He looks away, leaning over the balcony, focusing on what’s left of his spliff.  The balcony is chest height for Shantha, hardly five and a half feet tall. Barefoot, weathered and muscular, only a small paunch shows off the luxury of an occasional bottle of grog. He has the hands of a labourer, and it’s hard to tell where his facial hair begins amidst all the stubble.

It’s dead quiet, with a beach across the road through palm trees and piles of decaying coconuts. This side of the road is lush to the point of swampy, with bushels of tropical flowers and reeds protruding from the grass. It’s completely different to the ‘touristy’ beaches just a few hundred kilometers west.

There are a couple of other hotels around here too, but there seems to be no one around. It feels as though it’s just me, the locals and their livestock. Getting lost when coming in, the roads turned to bumpy grayscale patchwork before disappearing into undulating sand and clay. Livestock took over the road, and the speed of my tuktuk dropped from 40km per hour to a pace closer to their plod. 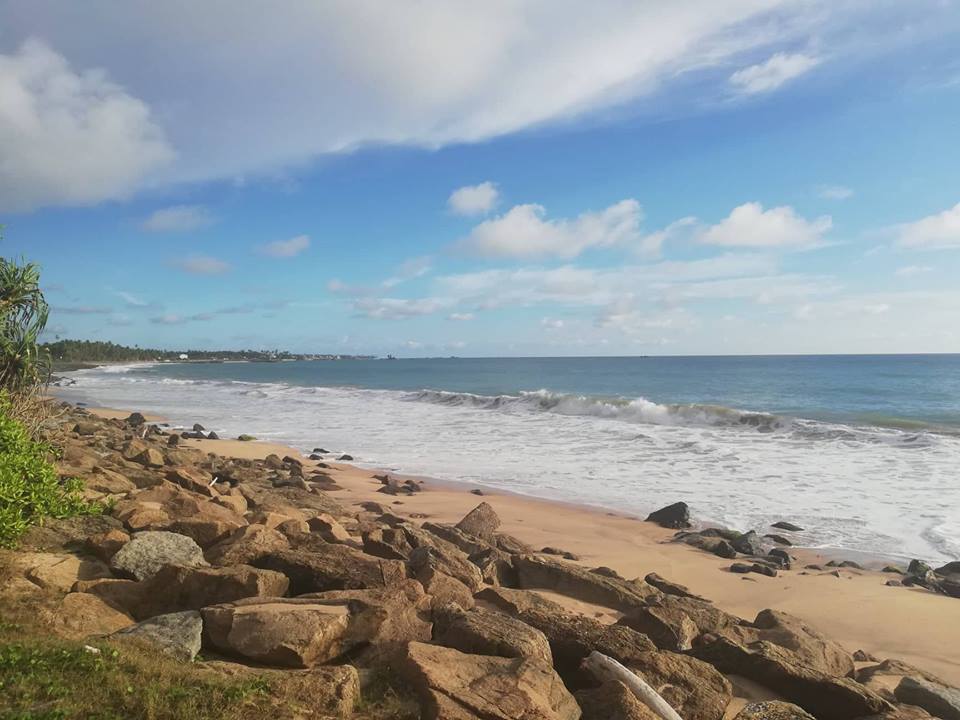 In the silence following my arrival, I assume I insulted him with my abstention from the green. He breaks it.

“What do you want for dinner?”

He implies he’s keen for a drink with me too, so he says he’ll pick up some arrack and a couple more beers when he collects his daughter up from neighboring Tangalle. Maybe he’s warming to me.

I settle into the hammock next to the dinner tables and put on some music. I hear his tuktuk rev, and his wife comes to chat with me. Her name’s Ramani, and she’s wondering if I like chilli. I love it, I say, and she smiles quickly before returning to the kitchen. Yellow fin tuna, boiled vegetables, salad and a killer chilli garlic sauce arrive for dinner, and I’m comfortably stuffed.

Rain starts beating the roof, and the frogs voice their pressure. The lightbulbs hanging from the ceiling swing in the wind, the vibrato croaks intensify and I’m rocked to sleep.

I’m woken by Shantha, with beer in hand. He guzzles like I did, adjusting for the short lifespan of cold beer in these climes.

A bottle of arrack on the table, ready with a glass bottle of cola and Sri Lankan ginger beer. He takes his glass, fills it generously with arrack, tops with a meager amount of cola, and throws it back. While arrack, a rum-like distilled coconut spirit, is a floral and sweet drink it comes with a decent burn. He tells me “killing” the drink makes it that much more pleasurable. I do the same, and I guess I have to agree. 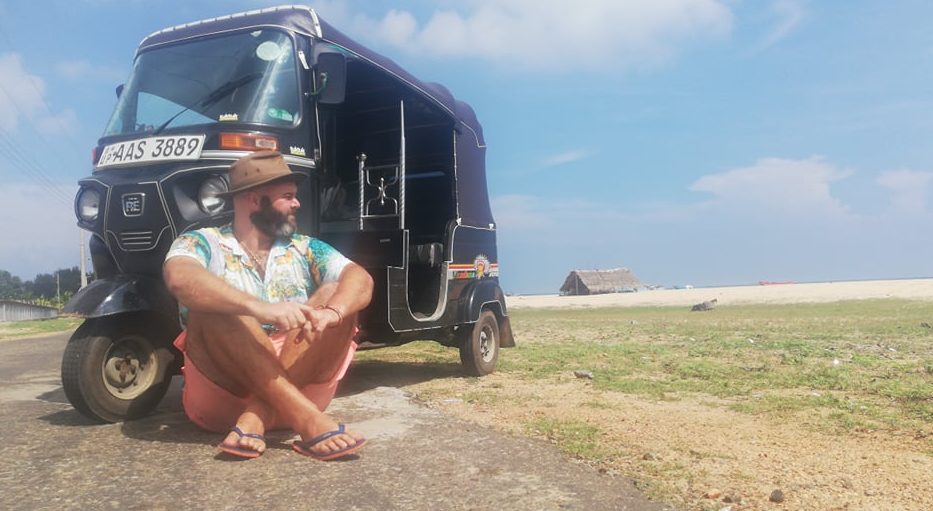 His mullet and silver necklace may point back to his days as a surfer, but his hard hands speak to a harder life.

Somewhat broken conversation turns from marijuana, girls and surfing in the good ol’ days, to something more serious. Shantha tells me, between slugs, he’s still rebuilding after the 2004 tsunami. It will probably always be a relatively humble place compared to others, but it’s this way for a reason, he says. He, his family, and guests were almost killed in the disaster.

I asked him where he was when it hit.

“Over there,” he points to some trees.

The Boxing Day tsunami killed more than 30,000 people on Sri Lanka’s eastern and south coasts. It was the same that killed hundreds of thousands in South-East Asia. They were lucky, he says. He implies the destruction of his then super-successful cafe was, in so many words, soul-destroying. He said he was once “fat like you”, but he became gaunt with the stress of trying to feed his family.

He implies he’s still struggling, but at least he’s rebuilding. He built a new cabin last year, which is his pride and joy. He has more land, further from the beach, and is hoping to build more. He seems to creak open with each swig of arrack, showing me pictures of what it looked like after the wave, eviscerated. Only it’s skeleton remained. Now it’s just the foundation, covered in rotting flora.

Another large skull of arrack, and I offer to change the music from my rock-country-blues mix to something more his speed. Reggae.

I give him some samples of Kiwi reggae and dub, and he seems to like it. The shots of arrack go quickly and it seems that we’re three-quarters done with the bottle. He says it’s OK, because we have ourselves a spliff. With hesitation I agree.

He says something to the effect of “it’ll take away your hangover”. It’s never worked for me before, but I’ll try again.

With the mention of my next destination – Arugam Bay, a surfing hotspot – he tells me he wants to join me. Just one night, he says, a holiday. His first in years. I agree, doubtful he’ll stick to his word.

I take a drag and my extremities become sensitive to the occasional gusts of wind. He stands up and leans on the balcony. He looks over at me, raises the spliff in his hand in salute.

The next day, shirtless, silver necklace hanging around his neck, he finds me packing my bags. He sits and says he was feeling last night’s effects this morning, I laugh. He gives me coffee, I thank him for the stay.

“I like you man, this was fun,” he says again, with a firm shake of the hand.

“Come back. Come here again, with your friends.”

I wonder, as I chug my way out of the hotel on my rented tuktuk, how long it might be until I return. Will it be three, five, or 10, years from now? Either way, I’ll be back for another bottle of arrack, and I’ll prove I’m just as Rasta as Shantha.