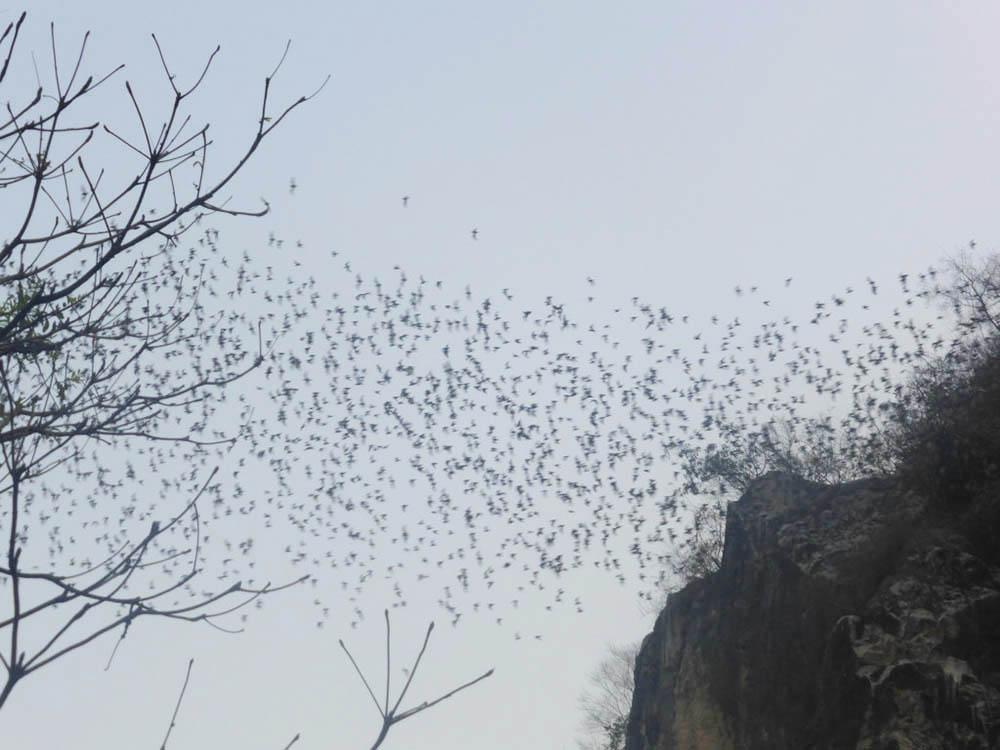 Could there really be thirty million bats leaving the Phnom Sampeou Mountain in Battambang, Cambodia every night?

A group of six friends travelling together, we arrived in Battambang’s city centre, heavily fatigued. Our tattered backpacks were hurled carelessly from the vehicle and we were soon clouded with thick dust arising from the roadside.

I took in the bare grey buildings and the empty streets and felt an ache of disappointment; this place could have been anywhere. A sudden splutter of chatter interrupted my thoughts and a beaming, weathered face peddled over in a colourful tuk-tuk. Threads of words were pressed into my ears – offers on guiding us around the city surroundings. Finally, there was an exchange of introductions. His name was Sokna.

This forward approach is the norm in Cambodia, and it is usually the most cost-effective and efficient way of sightseeing in a city. Despite the low pay, competition is high and most of the guides are residents, full of insider tips and local history.

The next morning, we were rolling through lush fields of green, our tuk-tuk groaning as it clattered up the dusty road. It didn’t take long for Sokna to indicate towards a towering tree and he pulled to the side of the road.‘Come’ he insisted ‘see this and take picture.’

Craning my neck, I absorbed the view ahead of me. Hanging upside down from the sparse branches were hundreds of black fruit bats sleeping soundly, dark leathery wings folded over their torsos. Their caramel-coloured faces were pointed and feline, like a hybrid of a fox and count Dracula!

‘Later at sunset, I show you when they leave cave’ Sokna carried on ‘amazing sight, many, many, many’ he smiled.
My friends nodded eagerly, but when Sokna informed us of the unpredictable timings of the bats’ departure for the night, I was doubtful – there is apparently no way of foreseeing what time the bats leave.

Yet the rest of the group were keen, so after a busy day, Sokna dropped us outside the historic Phnom Sampeou Mountain at around 5.30pm. The street was alive with locals flogging produce from street carts, stray puppies yapping and muffled chatter among the small crowd of tourists positioned with their DSLRs and camera phones.

With the sun lingering in the sky, I left my friends to take an amble and soon paused at a food cart. There was a large red plastic bowl full to the brim of some kind of cooked animal, each one brown and crispy, and spread out in a batman stance.
‘You want try?’ the stallholder eyed me up and down, challenging me. 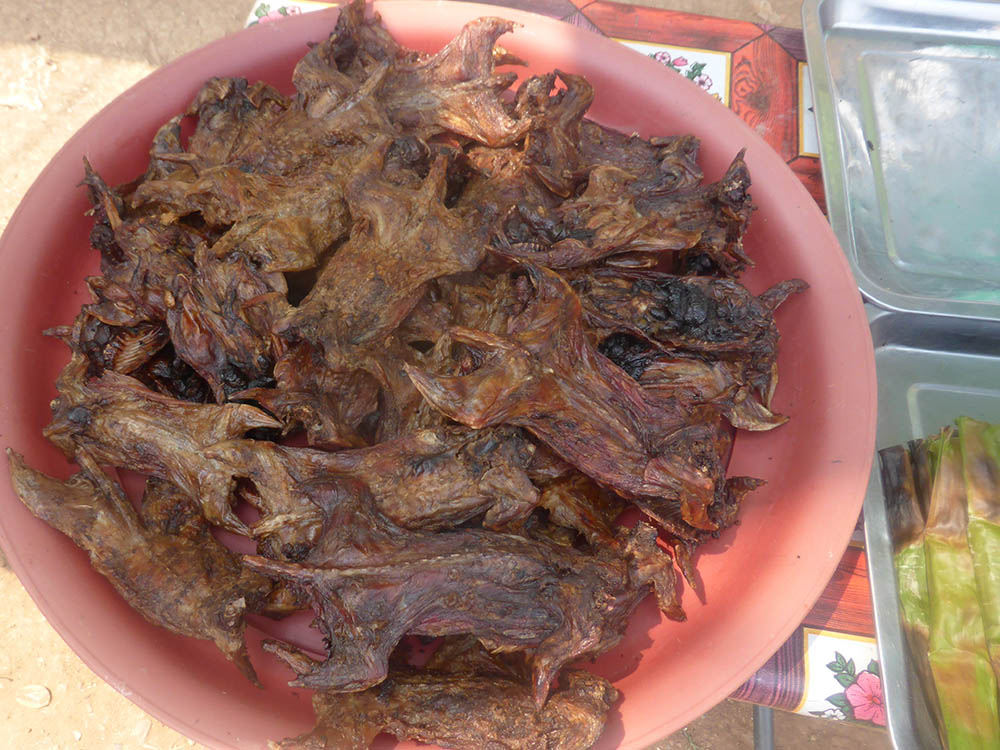 Fried Rat is a Cambodian Delicacy

‘Erm, what is it?’ came my uneasy response.

‘Fry rat’ and then he was cackling with laughter.

‘Oh… no thank you, I’ve just eaten’ I declined politely. Later, Sokna informed us that fried wild rats are a delicacy in Cambodia, due to their free-range lifestyle and largely organic diet.

Slowly I made my way back to my waiting friends, pausing every now and then to pet a stray dog on route.

The mouth of the cave didn’t look like much itself, a simple opening between the greying stone of the mountain, about 100 metres up on the rock face. The sun was unhurriedly sinking into the horizon; it was time to wait.

Thirty minutes later we started to hear it – a quiet fluttering, growing louder and louder as a couple of dark specks swooped from the mouth of the cave. There was a sudden cacophony of gasping, and then a mass, slowly mounting in size. The bats were flying together so flawlessly streamlined and silhouetted against the pastel blue sky.

‘I heard there are over 30 million of them,’ the couple next to us muttered.

Another thirty minutes passed and the bats showed no sign of stopping. The creatures were soaring out of the cave so fast, that already hundreds of thousands – if not millions – must have already left to hunt for the night. I was eager to wait it out, but I knew we mustn’t leave Sokna waiting.

As we crammed into the tuk-tuk, we were full of excitement. From the main road, we could spot the trail of black bats dancing across the skies, forming a perfect curve across the landscape. The sky had warmed to a pale orange glow.
‘Sokna, do you know how many bats there are?’ I questioned.

‘I say one million, but nobody know.’ he grinned ‘everyone say different number.’ I nodded and thanked him but I was skeptical.

Later that night, I did a touch of online research using the Wi-Fi at our guesthouse. Sokna was right – whilst some estimate that there are hundreds of thousands of bats, others really do make educated claims in the millions. Could there really be thirty million bats leaving the Phnom Sampeou Mountain each night?

Ellie Swain is a British freelance travel writer who also works in marketing. Aside from travelling, she loves going to music festivals in the summer, visiting niche restaurants and taking beautiful photos. For more of her content, follow her at lifesawindow.co.uk