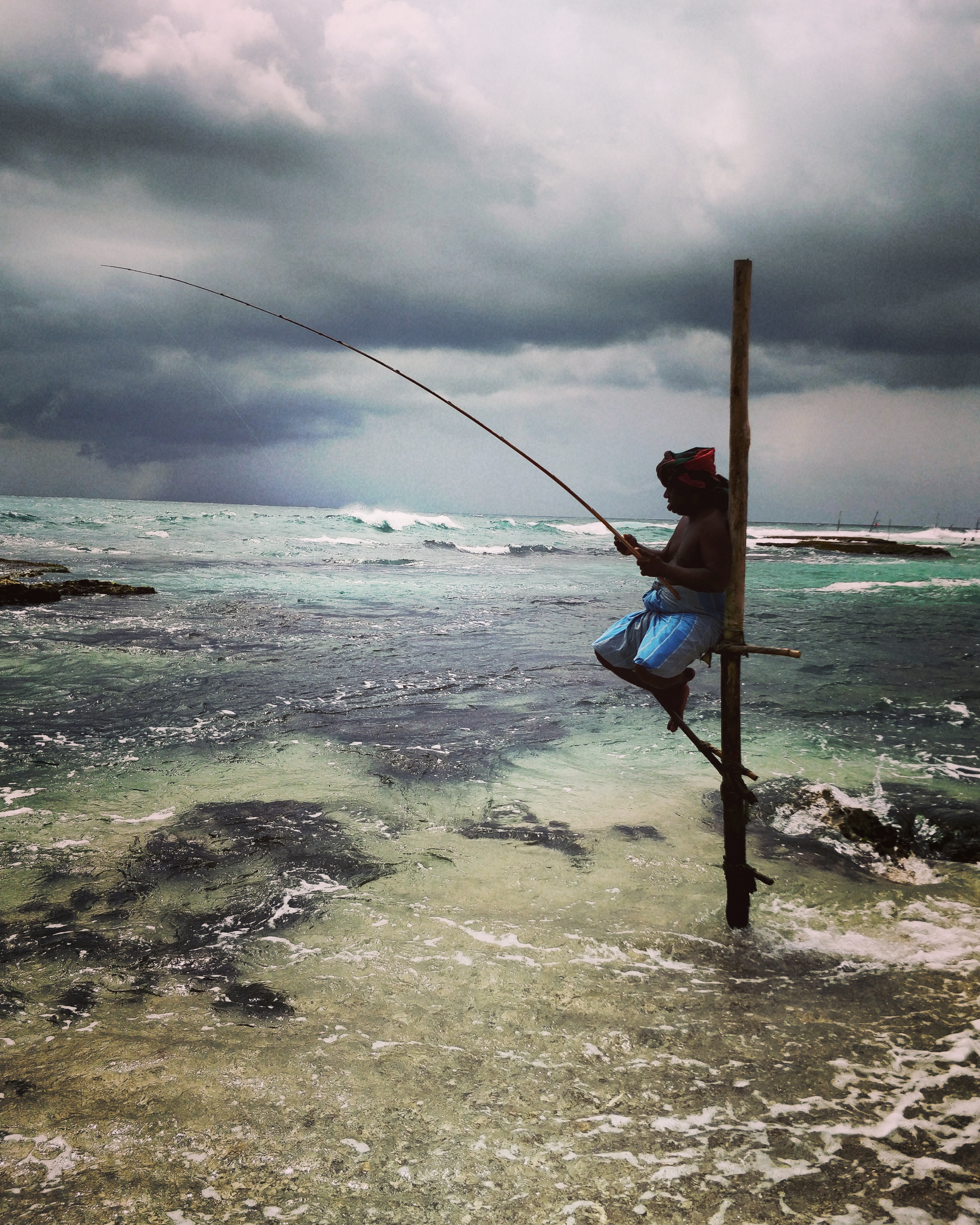 A woman seeks peace and answers on the island of Sri Lanka and learns how to enjoy life from those affected by the 2004 tsunami.

One Tuesday afternoon in Mirissa, a small tourist town in the southern province of Sri Lanka, I slouched my sandy self on a beach chair and gazed at the clear blue ocean in front of me. It was a bright, sunny day. However, that was not how I felt. The waves were calm and gentle, yet uncomfortable thoughts raged in my head. As travellers swam in the infinite depths of the ocean, I clutched to my phone. Texting a friend back home, I told him what a great time I was having in Sri Lanka on my first solo trip abroad. I lied to him, realising that I could no longer lie to myself.

“Is it okay if I leave my bag here while I swim?” I asked a server in a nearby restaurant, trusting him with my money, phone, and passport. He nodded and off I ran into the turquoise water. As I swam deeper into the ocean, I suddenly became aware of every moment that I was living. Every wave that gently caressed my body, every thrust that I moved ahead with, every breath I took on the surface, and every thought I had that pointed towards one troubling question — “Why was I hating my own company?”

The answer is never a simple one. It wasn’t supposed to be. I had always believed travelling had the power to heal anyone. That one could always find the answers they were seeking. But sometimes it also posed uncomfortable questions, that one may have subconsciously been ignored for too long. Perhaps that is why I had ended up in this splendid island country after facing a professional downfall and a diagnosis of GAD (Generalized Anxiety Disorder) that I had been successfully battling through therapy. But wandering alone through a foreign land with uncertainty, seeking inspiration from the simplest of things, was a therapy of its own kind.

So was that swim. It was calming and liberating, but only temporarily. As I found my feet back on land, I found the anxiety back in my mind. Were my belongings safe? Was I looking fat in my beach wear? Was I going to be alone through the night? The answer to all of the above was in the affirmative.

That night, as I sat by myself anxiously after a failed attempt at feeling better at a trance dance party and making conversation with others, Firuz, who runs the Going Om Hostel where I was staying, came and smiled at me warmly. He asked, “Why do you travel?” Surprised at this sudden question, I replied almost instantaneously that “I travel to learn and unlearn, but I also travel to run away.”

Nothing more needed to be said. He understood what I was feeling and told me about his own battle with mental health that almost led him to take his life at 17. When that attempt failed, Firuz began to travel, thinking that he had nothing more to lose. How he found himself and the hostel through that is a story that only he can do justice to, but he made me realize that it was okay to feel whatever I was feeling. It was okay to embrace my thoughts and take time to decide what to do next. All is good as long as we carry love in our heart for others, and most importantly ourselves. He then directed me to look into the mirror the next day and tell myself with love that I was doing great and that I loved myself.

I did what I was told. That simple act didn’t solve all of my issues. I didn’t expect it to. But it certainly gave me the courage to go on with a smile on my face as big as his.

The next morning, I left on a local bus for Galle, a beautiful, erstwhile Dutch heritage town on the coast. Through the window, I gazed at the turquoise ocean glistening under the afternoon sun, sprawling towards infinity as the waves came crashing over dense hillocks and the coconut trees that swayed in the gentle breeze. Sri Lanka’s southern province is truly beautiful, but recounting my experiences of the past few days, I realized that its people were more so.

For shy and socially awkward people like me, who do not particularly understand and enjoy the glamour of solo travel, it was the Sri Lankans that I met who truly helped me battle my loneliness and utter confusion for the ten days I was there. They share a turbulent past, be it a long civil war or the perils of a tsunami. However, they also share a rich cultural legacy that is evident in the food and the lifestyle, as well as their geography that makes them so respectable towards nature. They are the warmest and friendliest people I have met.

There was Firuz who had taught me to be comfortable with my own thoughts; there was Lalina aunty, the caretaker of my hostel at Hikkaduwa, who had looked after me as her own daughter and made sure I was always well fed. Then there was London, my snorkelling instructor who, while on a walk on the beach, told me to seize the moment and have all the fun I could. He later took me to a party where I really put his advice into action. Then there was the kind man at the tsunami photo gallery, a survivor himself who tied the holy Buddhist thread around my wrist and prayed for my well being. While spending time with all these people had benefited my mental health, it was one woman named Kamani D’Silva who truly changed my perspective towards life.

Sri Lanka’s coast was one of the worst hit by the tsunami, and its stories still linger in the backdrop. Some of these make it to the Tsunami Museum that Kamani D’Silva opened in her house. This is the same house that she lost during the disaster. “When I saw the first wave, I thought this was the end of the world. Everyone was out running on the streets. After the first wave, a few people went back to grab their stuff, thinking it was over. Then came the second wave. Hardly anyone survived. We didn’t return until we were told it was safe to. When we came back, only the floor of our house remained. Everything was gone.”

D’Silva did not care about her material possessions. All she cared was that her immediate family was safe. She lost a lot of friends and neighbours and rebuilt her house and her life for the next three years. Once things returned to normal, she opened the Tsunami Museum where survivors shared their stories. From sketches by children to pictures and statistics to memoirs from tourists who lost their loved ones to deeper realizations of valuing not just our lives but also nature, that we are nothing without it and we shouldn’t try to fight it – all find their way in this space. But one also finds courage and inspiration here, especially through Kamani, who relives the tragic day, every day as she guides visitors through the museum.

“We never know what will happen, when another wave will eat us up, so we try to make the best of every moment — no grudges and no sadness,” D’Silva says.

“Madam, Galle is here,” the conductor said, snapping me out of my thoughts. As I took my bag and stepped out of the bus, my head was still buzzing with thoughts of D’Silva. She was right. Life was uncertain. I had to seize the moment and enjoy all that Galle had to offer.

First built by the Portuguese in the late 1500s, Galle was excessively fortified by the Dutch when they took over. The city has museums, churches, temples, mosques, quaint roadside cafes, old Dutch bungalows, and quiet lanes all built within the fort that looms over the magnificent ocean. Here I hired a local tuk-tuk, whose driver became my personal guide and showed me around the entire city and even decided to take me to Kogalle, a beautiful, quaint fishing village nearby. Here I spent some time with the fishermen, understanding their lives and livelihoods in great detail, sharing a meal of Kothu (a local delicacy, a mish-mash of chopped up hand bread, veggies, chicken and cheese). It was delectable, cheap and wholesome.

At night, I interacted with people from all over the world in my hostel, getting a peep into their lives — also sharing my own stories with them. I also journaled extensively in my diary about my thoughts of people I was meeting and experiences I was having. Anxiety often results in overthinking, which is why one tends to bury themselves in work or distract themselves when they are in their own environment. But when one is out of their comfort zone, on their own, there’s little one can do to avoid their thoughts. It is almost as if they are forced to think about what they have been avoiding for so long. This can be terrifying, especially when a part of you so badly wants to enjoy and immerse yourself in the rich culture that the destination has to offer. But it is also imperative and somewhat inevitable.

Sri Lanka is beautiful and so am I, in more ways than one. I did not find my answers in the end, but I knew what my questions were. I had finally faced my demons. Now to defeat them, I perhaps need another solo trip. Vietnam, maybe?

Devyani Nighoskar is a young, independent journalist based out of India, who writes about travel, culture, development and identity. Often travelling in search of stories about people and places, she has a keen interest in rural and sustainable tourism and documents her narratives on her Instagram Blog, runawayjojo.