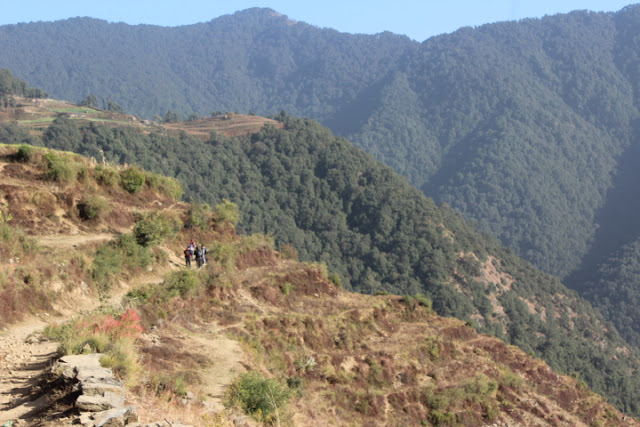 The God of Snakes – Scaling The Himalayan peak of Nag Tibba

I was walking. I kept walking through the rocky trail as my body could feel the weight of every step I took.

The sun shone bright, but the air was still chilly. I looked around, gazed at the majestic Himalayas of the Garhwal, the green valleys and took in a lungful of fresh mountain air. The duffel bag on my shoulders was trying to pin me down and the wooden stick that I held for support was wet with my sweat. I looked around to spot the summit, but it was too far to be seen.

I was on the Nag Tibba Trek, in Uttarakhand in the far north of India.

We started from a hill village called Panthwari located at an altitude of 1300 meters in the Garhwal region of Uttarakhand. It was a steep climb over rocky terrain, and our feet carefully refrained from stepping over any loose rocks. The clear blue sky that stretched afar embraced the mountains at their peaks. The view kept changing as we passed thatch-roofed villages, shepherds grazing their cattle, gargling water springs the water of which could only taste sweet to our dried up mouths and villagers whose smile seemed to be the only source of motivation. And then there was the friendly chatter of my 8 co-trekkers.

“I am sure we must have completed at least 3 km of the trek,” I exclaimed to our 15-year-old trek guide Shubham who hailed from Panthwari. Amused at our snail-pace, he stunned us by declaring how we had only covered 1.5 kilometres so far. The rocks continued to bark the path and all of us pined for the forest trail to start. But we still had a few kilometres of stones and occasional animal bones to get through with. The trek got tougher but the scenery only more breath-taking with each passing step.

Occasionally stopping for breaks, staring at the mountains and the path that so prettily twirled around it, the lush valley that we saw, made us realize how high we had come up. Then we overlooked at the towering cliffs above us that we were still had to scale.

The rocky path had now ceased to exist for I could feel the dry leaves crush beneath my feet and the cool shade of the trees above my head. Aah! The beginning of a 5 kilometres forest trail. There was something so magical about forests. The mystery that they entailed, the so many secrets that they hid amongst its twirling –winding paths, dense bushes and hovering trees. The occasional alarm calls from one animal or the other and the weather that had now considerably cooled down gave the chills to our exhausted bodies. I remember coming across an open field, lined with soaring Deodars.

The sun was setting and the sunlight peeped through between the trees giving incredible shades and hues of yellow, orange, green and pink. It looked like a scene from a fairy tale. The woods where Red Riding Hood came for a walk or where Snow White got lost. Such was its fascination.

The last one hour was probably the most difficult, for our bodies had almost given up. It was pitch dark now, the animal calls and the hustle bustle behind the bushes and on the trees was spooky. Figuring out the path in the dark and dragging our bodies through the trail, my heart jumped with joy as I caught a glimpse of our tents.

We had finally, after 7 hours of trekking through the rocky terrain and the forest trail reached the Nag Tibba Base Camp at 2600 meters height. We were elated.

After being assigned our tents, the first thing I did was gaze upwards. The night sky dazzled with twinkling stars. Hundreds of them, just looking down on us. I had forgotten what a sky full of stars looked like. It was breathtaking, the kind of beauty that left you gasping. A simple homely dinner was served, thereafter which everyone retired for bed. I did not sleep a wink, shivering through the night, desperately hoping that it wouldn’t affect my performance as a trekker.

The next morning we were supposed to trek up till the summit of Nag Tibba. I was excited to see the world up from there. We stopped at the Nag(Snake) Temple on our way over there. A simple sloped roofed temple which was closed but our trek guide for the day told us about its fascinating history. It is very difficult to find water on the hills in the absence of any river. Apparently, this temple had a spring that has been become a natural source of water for all the villages on the hills. In fact, the people here are avid worshipers of the Nag Devta (the snake god).

In fact, Nag Tibba itself is believed to be the abode of snake god, from which it borrows the first part of its name; ‘Tibba’ is a local word for hill or peak. Local villagers come here to offer their prayers to Nag Devta for the protection of their cattle.

After our visit to the temple, we continued to ascend the hill to reach the summit of Nag Tibba. The trek although was not as tough, the lack of sleep made us really slow climbers. The chirping of the birds, the fresh whiff of mountain air and a distant view of the Himalayan snowline, it was picture perfect. After about an hour and a half of our climb up, we saw the peak decorated with flag posts that came alive with the sunlight that fell directly upon it. I rushed towards it. 3022 feet-up above the world so high, we had successfully trekked the highest peak of the Garhwal region.  I felt at the top of the world literally.

I wasn’t particularly keen to trek down. But we all find our motivation, don’t we? A slight comment on my and my friend’s slow speed on the trek downhill from the summit seemed to trigger us off and we acquired supersonic speed just to prove everyone wrong.  We were trekking down through the forest trail, not stopping even for once, and we came at par with the fastest trekkers of our trip- 3 bulky men from Haryana. We weren’t being accompanied by any of our guides were supposed to find our own way And like all legendary adventure epics, we were destined to get lost.

Debates sparked, while the 5 of us tried to convince ourselves that we had indeed taken the right path. All the trails in the forest seemed similar. One of the men came up with a theory that we were in fact on the other side of the hill whereas someone said we had taken a longer route and it would take days for us to get back. Calls for Help, map drawings on soil, everyone had their own theories. Getting lost was a thrill in itself and we had no option than to continue trekking down. “We will reach somewhere, let’s just continue walking,” I said until we came to an open field that looked like a dead end.

The arguments died down and the silence that followed made us hear footsteps and voices. We shouted at the top of our voices. And suddenly our trek camp director came out from the bushes. He remarked. “I had warned you that one wrong trail and it would take days to find your way back but lucky for you, this is a rather difficult shortcut that you guys took”. And just like that, we realized what had taken us 3 hours the previous day took us just two hours this day.

We continued descending down, came across friendly women who walked down effortlessly. Funny how what was life for them, was an adventure for us. Within a few hours, our trek was over. Our bodies were exhausted, but our souls were overjoyed.

The Nag Tibba Trek — we had despised it during our ascend, during our sleepless night, but there had been beautiful moments that had overpowered the distress. The nap on the summit, the wallop of getting lost, the dazzling night sky,  the opportunity of meeting new people, the winter chill, the green hills, the snowy peaks, the many happy conversations, the smiling faces and most of all the journey that had obliquely not only taught us about nature and wilderness, but about finding our own motivation — relying on our own strength and willpower, confronting each situation optimistically and most importantly to never ever give up, because ahead of a difficult journey lies a wonderful exploration that makes every drop of sweat, every aching body part, absolutely worth it.

Devyani Nighoskar is a young, independent journalist based out of India, who writes about travel, culture, development and identity. Often travelling in search of stories about people and places, she has a keen interest in rural and sustainable tourism and documents her narratives on her Instagram Blog, runawayjojo.