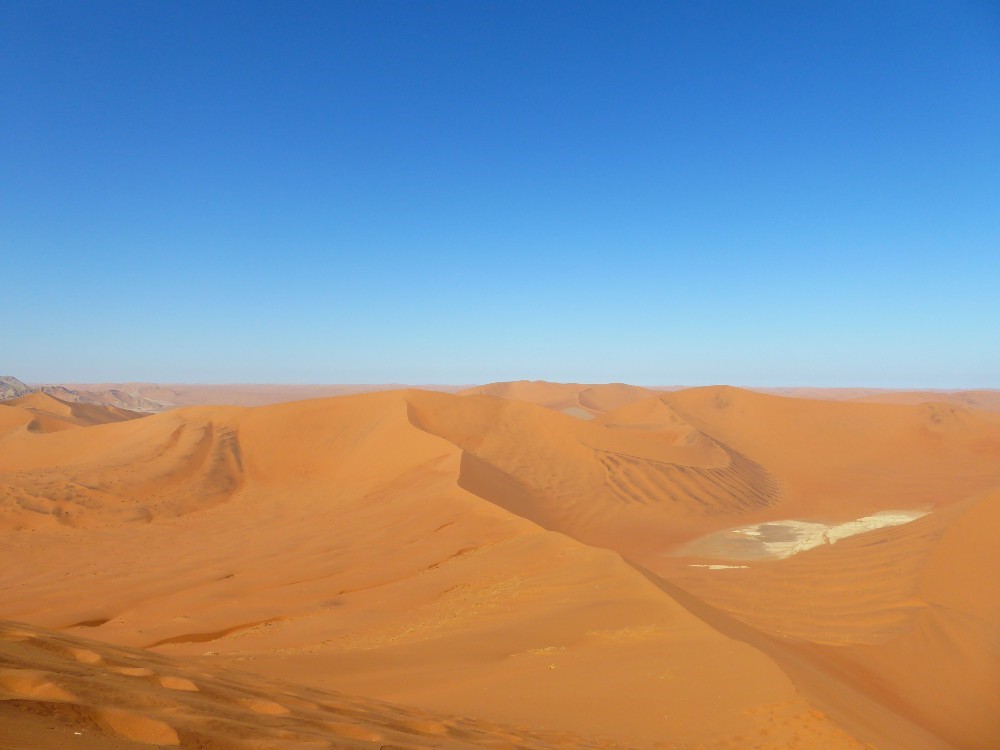 Silence of the Sand

By Lorenzo GaertnerMay 21, 2019Africa
No Comments

“After the heat, the first thing that hit me was the silence. I couldn’t miss it. There was nothing to absorb sound. No trees, no buildings. Just orange sand stretching endlessly in every direction. I became painfully aware of the sounds around me: the heavy boots trampling unspoiled earth, the clang of car doors, the clack-clack-clack of cutlery on disposable plates, the chatter — all of it imposed on the tranquility in whose midst I found myself. I felt out of place, an uninvited visitor to one of the last peaceful spots left on Earth.”

The Jeep swung round a wide corner, jerking us violently as our guide navigated the craters and bumps in the road. Then the smaller dunes receded and I saw the towering, imperfect pyramid known as Big Daddy, which I had come here to climb with three Norwegian backpackers I’d met in Windhoek a few days earlier. I leaned over the front seat and asked our guide how long he thought it would take us.
“One hour is considered very fast,” he said.
“How long does it take you?”
“Just under one hour.”

It was cloudless, and glaringly bright. The sun pounded the sand and the very earth seemed to throb, radiating the heat back out and up towards you. Groups of rocks lay scattered at random on the sand. There was no shade, since there were no trees. The salt and clay pan (from which Sossusvlei gets its name) wound between the dunes, its surface dry, cracked and yet oddly springy to walk on. The sky and the sand were like two sides at war, each immersed in its own colour, a singular mass that moves and breathes as one. It was a view surely not of this world: the visible landscape reduced to two colours, each bringing out the depth and richness of the other.

As we got closer, I saw the trail of hikers in whose path we would be following. They seemed to move so slowly, inching up the giant dune with the unconscious determination of marching ants; from afar it looks like you could do the whole thing in a short sprint! We stood at the base as our guide briefed us: stick to the trail, fill up water bottles now, rendezvous by the Deadvlei (or “dead marsh”, a clay pan within Sossusvlei on which trees hundreds of years old, and long dead, still stand). As he talked, though, my eyes were drawn to the swirling mass of sand rising up to the clouds in front of me. Little did I know then that climbing Big Daddy would be one of the toughest physical challenges of my life.

One way to make hiking in sand easier is to walk in the footprints left behind by others, since the sand has been compressed into a hard surface. My legs began to burn, from both heat and strain, and I kept my head down so as not to dampen my spirits when I saw how much of the dune there was left to climb. Never mind getting to the top, I thought. Just keep asking yourself if you can manage one more step. If you can manage one more, sooner or later you’ll make it.

The more I climbed, the further I moved away from the Jeep, the scattered voices and sleepy laughter, the hum of car engines and the smell of portable gas burners. It all receded bit by bit until the only sounds I could hear were those I created, the rhythmic monotony of my footsteps and heavy breathing. The heat only got more fierce, pummeling my body with the full intensity of the African dry season. Sand began to fill my shoes as I missed the occasional footprint, and at random the ground would slide away underneath me, taking one of my legs with it. Panting turned to grunting as I would be forced to heave my leg forward again. I looked up, shielding my eyes from the sun, and saw that I was barely half way to the top.

Light breezes gathered wisps of sand that lashed my face and forearms, turning my skin a deep orange-brown. The mountains in the distance seemed to wobble in the blur of the rising heat. My face dripped and my forehead throbbed. I had brought as much water as I could carry and had to stop myself from drinking it all at once. The only trees I could see were far below on the Deadvlei, but they’re several centuries old, and dead. I imagined there was a lake there, and that the trees were alive, and that I could leave the climbing to the others and roll down the dune and plunge into the cool water and bathe in the shade of the trees. But there was no such relief here: only sand, rock, heat, death.

And quiet. A deep, profound stillness. Out here no noise is so subtle as to go unnoticed. At times I would catch the murmurs of other hikers chatting several hundred metres away. I wondered if I would experience quiet like this again. On a quiet afternoon at home I still hear the gurgling of pipes or the whooshing of passing cars or the low hum of electric currents — but never is it silent like it is in the desert.

I didn’t notice that at some point during my meditations the footprints had ended and I was setting a trail of my own. Something wasn’t right. I shook myself back into the present and looked around, but there was no-one. The way ahead curved widely to the left. Perhaps if I just followed the bend I’d find a way to rejoin my intended route. I rounded the corner and stopped dead as it became clear why I was alone.

Somehow I had managed to take the mother of all wrong turns and now stood at the bottom of a wall of sand so steep it seemed to lead directly to the sun. No wonder it was so damn silent.

There was some good news. I figured out that if I could just make it up the sandy wall, I would have actually taken a shortcut — in distance terms, at least — that would bring me back to the proper path for the final push to the top. I threw myself into the unspoiled sand, which was refreshingly cool for having been in the shade all morning, and clambered upwards on all fours, my shoes getting ever heavier as the sand found its way into them.

Sunlight streamed over the ridge as I surged upwards, trying to ignore the pain in my legs. Out of breath and sweating profusely, I dragged myself to the top and sank to my knees in exhausted triumph.

I was once more among other hikers, who looked puzzled at my sudden emergence from an unused trail. Rejoining theirs, I stopped to let the burning in my legs subside before the final stretch. ‘One more step? One more step!’ I said as I charged up Big Daddy’s neck. And then, at last, I saw the ground level out beneath my feet and raised my head to see that I had arrived at the top of the world. The silence greeted me again and I closed my eyes and let it take me. But then it was gone, as quickly and easily as it had come to me, scared away by zippers and wrappers and cameras and phones and the unending drone of voices. A precious thing, indeed.

Having been born in Cape Town, South Africa to German/Italian parents, then raised in the UK before moving to the Netherlands to study, Lorenzo has never felt tied to any one country. The hours he spent as a child poring over atlases and drawing flags sparked a lifelong passion for travelling, and he is always on the lookout for unique and authentic travel experiences that he can relay through his writing. But, although he relishes the freedom of moving around, he admits that his mixed ancestry does make it hard to know who to support at the World Cup…