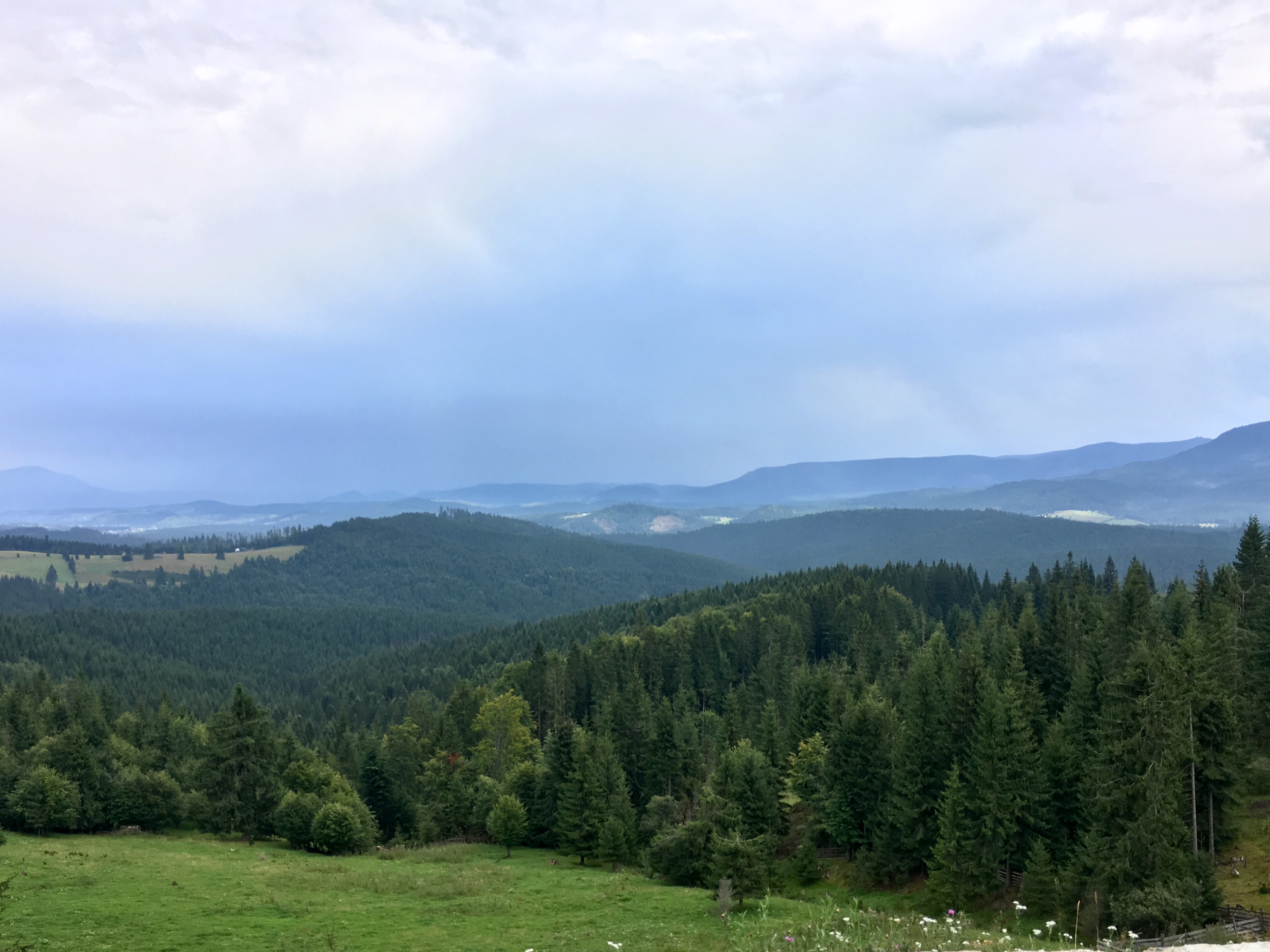 To The Edge of Romania

A British woman travels to Gura Humorului in Moldavia to meet the grandmother of her Romanian partner.

I had been anticipating the meeting for so long. Stef’s grandmother lived in a village far from the nearest town, just a small cluster of houses. He had warned me before that she was “just a peasant” and told me not to expect any of the fairytale pleasantries that I had been not-so-secretly dreaming of.

Midway through a summer of road-tripping around Romania, we made it to Gura Humorului in Moldavia, where Stef’s parents lived. Stef and I had met when we were both working in Dubai, and this was my first time in Romania with him, though I had visited before alone. He said he needed to go and see his grandmother who lived another hour’s drive away, near the Romanian border with Ukraine.

As his grandfather had passed earlier that year, she had sole ownership of the property and family assets, and she wanted to pass them on to Stef as soon as possible. She needed someone to drive her into the closest town to go to the local bank. For me, this meant an opportunity to finally meet her.

The road to the village took us through open farmland and a number of small hamlets comprised of well-kept wooden cottages with carved porches and painted shutters. Waiting horses dozed by the side of the road, attached to carts laden with hay or timber. The place names were written in both Romanian and Cyrillic, hinting at the proximity to Ukraine.

Towns became less frequent and smaller until eventually we reached the final one before her village. It was barely a town, containing just a bar and a few shops. A couple of children kicked up dust where they played, but generally, the whole settlement seemed still. The track turned from tarmac to dirt as we went further towards our destination.

The cottages in the village were all constructed in the same regional style, one-story buildings, usually built by a single pair of hands and painted in a range of bright colours. As we passed the tiny wooden church and graveyard, I noticed that almost all of the dark wooden crosses bore Stef’s surname. This village is one of the only places in the world where it exists. Now, with his grandfather gone, he is the last surviving male with his name.

When we arrived, his grandma came out of a little white and green house, dressed all in black and wearing a simple black headscarf. Weeds grew up through the vegetable plants. The corn was piled up in the barn, left unprocessed and picked at by the fat farm rats. The grapes, hanging heavy on the vines, still had not been turned into wine and probably never would be again. The dog still mourned his master’s loss; he would not approach the old woman and only came out of his spot guarding the chickens to snatch at the scraps thrown to him from a distance.

In the house he had built for her, Grandma made us strong coffee in a small pot and warmed up ‘pui cu smantana,’ chicken with sour cream, on the stove top. She brought us bread and fresh, homemade cheese to have alongside it. We ate the creamy stew gratefully, picking out the bones of the old chicken and lining them on the sides of our bowls. I was given the chicken’s heart that had always been given to Stef when he was younger as a small and special gesture of love.

The following day, Stef’s mother made us another ‘pui cu smantana’ to introduce me to the dish made in the proper way, this time with a plump, corn-fed chicken from the local supermarket. The meat was thick and tender, and it bathed in a sauce full of rich cream and seasonings. It was better, much better, but it felt different.

His grandmother had made us a meal with a stringy, egg-laying chicken she had killed before we arrived, she had bought the sour cream that morning from a neighbour who had a cow, and the homemade cheese she had been soaking in brine for a few weeks. She sat on the edge of the patterned bed in the one-room cottage and watched us eat, asking questions about me in a strong Northern dialect and staring quizzically. She never ate in front of Stef at any point during his life; she did not like the way she looked when she was eating and she did not want her grandson from the city to think less of her because of it.

When we left she packed us off with an enormous basket of eggs, bunches of grapes, and a sack of onions. She kissed me and told me to “treat him nicely,” using a strange and roundabout idiom rarely heard outside the region. She waved goodbye to us from the little bench in front of her gate whilst we bumped back down the dirt road.

It is unlikely that she will be able to go on for much longer. She said that she was getting too tired to do the work she once did. Now that her husband, Stef’s grandfather, has passed, there are not enough hands to do all of the work needed to keep the small homestead in check. It is hard to imagine what will happen to her now. She would never move from her home where she lived for all of her married life. A care home or equivalent would be unthinkable. She does not want any help from Stef and his mother.

Hers is the story of the whole village. Once thriving and busy, where everyone knew the others and the sound of nails being hammered into wood, the building of new houses for soon-to-be-married couples, could be heard daily. Now it is quiet, just the gentle clucking of chickens and the wind moving in the trees that line the river. The young people have left, no longer drawn to life spent working a small plot of land with a life partner from the same village. The presence of the older people is slowly fading, too, their carved and painted wooden houses gradually being overcome with the plants they used to tend daily.

Pui cu smantana is an enduring dish that serves as a reminder of the old village traditions and the lives that made them, slowly sinking into the past. It is generous and nourishing, meat and soured cream, melded together with onions, leeks, and carrots that melt into the sauce over the long cooking time. The bones, skin, and organs from the whole chicken do the same, imbibing the sauce with the fat and flavours from the bird until the meat is falling from its pale frame. These ingredients are the essence of the countryside: the foods most abundant and most enriching for those eating them, allowing them to continue producing the same ingredients in an unending cycle of days, seasons, and lives.

Romania’s countryside as a whole is changing rapidly as industrialised processes take hold, due in part to an influx of EU funding. The modernisation of much of the landscape will no doubt have profound and positive impacts on the country’s economy. There is a great need for better infrastructure and transport links, for instance.

In the midst of these changes, it is hard to imagine the peasant way of life holding on. At the moment, there is still prevalent use of horses for ploughing and pulling carts, and they can be seen trotting along the newly-built main roads. The use of simple hand tools, such as scythes and pitchforks for cutting and piling hay, are also common. Old women and their sons can be seen driving their cattle through the centre of the villages in the evening light, and shepherds with their dogs and sheep dot many of the hillsides.

To truly appreciate Romania as it has been in the past, even as it accelerates towards its future, now is the time to visit. It is unclear how much longer the old ways will endure, and it is something to be appreciated, in situ and alive, before these ingredients and the hard work that produces them disappears.

Before we left, Grandma took us to the barn where her two cows used to live. The hay was still built up in the feeding racks, and the milking stool stood in the corner. They had been her cows, and she missed them dearly. She moved over to the woodworking bench where her husband’s tools still lay in their box. She stroked them in silence, remembering when they had been used to build the barn in which we stood. Then she hurried us out, dusting off her hands, and closed the door behind her.

Elizabeth Harris is a freelance writer from the UK, specialising in food writing, anthropology and history. She is currently living in Sibiu, Romania. Find out more at www.bethharris.com or follow @elizabethharriswriting on Instagram.