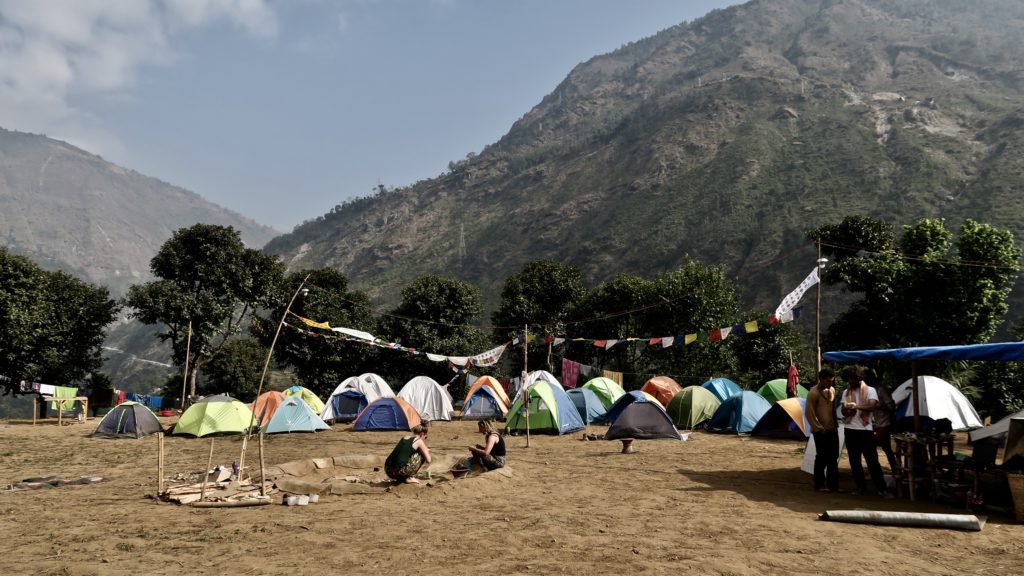 By Alfonso PortabalesJuly 8, 2019Asia
No Comments

In a remote Nepalese valley ravaged by a recent earthquake, a Sherpa wedding still manages to bring joy.

The night is dark, the moon covered by heavy clouds of rain. Artificial light shines brightly on the guests as they burst, hands in the air, into an energetic, joyful, rhythmic, and explosive dance. Massive, wall-like speakers howl Nepali pop songs loudly into the open air, crashing into the vast mountain-range that surrounds the valley of Dhumtang, 15 km away from the now collapsed border with Tibet.

This valley was one of the most gravely affected by the Gorkha earthquake in April 2015. Approximately one out of every three lives were lost, and all the structures—the school, houses, and the road connecting Kathmandu to Tibet—were completely destroyed and left in ruins. Everything started shaking on a Saturday around midday, a time when most people were out of their homes, safe from the falling wreckage.

Shortly after, many organizations sent teams and joined forces with the local population. Most of the houses—even in temporary, CGI, and bamboo-based forms—are now standing, the road is about to be reopened, and a team of around 20 volunteers, teaming up with local masons, is very close to finishing an earthquake-resistant school for the children of the valley. Six days every week this coalition of improvised builders works from dawn to dusk, digging, removing the rubble entangled in the ground, creating a resistant retaining wall, and mixing cement by hand, among other things. Even if there is still a long way to go, there is plenty of cause for celebration.

A Sherpa couple of the village is getting married. The Sherpa are one of the many ethnicities native to the region. With their different languages and religions, they have coexisted for centuries in the same area.

This is a Nepali wedding, and as such, food and drinks could never be less than over-abundant. The plot of land chosen for the celebration is a three-level terrace. The lower level is an open arena of dancing and drinking, the main area for the guests.

This “dance floor” is encircled by woods of scarce vegetation—at this altitude, vegetation is not as lush as in the plains of the south—and features a massive 30-person tent where the tired attendants can have a well-deserved rest. Around the lamp-posts, the only two sources of light in this level, circles of dancers are formed with members from every generation. They start moving around them, shaking their hands to the rhythm of the song as if wanting to summon an object out of thin air, constantly advancing towards nowhere, creating a hypnotic effect like the enacting of a mantra.

All the guests are dressed in traditional Nepali clothing, and even the foreigners are wearing the topis—circular hats with flashy designs ranging from pink and orange Escherian patterns to simple, elegant black caps, sported by almost every male in the country—and saris, the famous dresses similar to the ones you might encounter in India, but better suited for the cold. All of them were generously lent by the neighbours of the village, excited at the novelty of having 20 foreigners dancing and feasting with them.

One level above the dancing area, all of the observers—either too old, too shy, or just not in the mood to dance—crouch, discuss, and laugh about the mishaps of the roundabout of dancers below them. Behind them are a couple of wide tables and big pots filled with Tomato Dal Bhat—rice with lentils, the base of any Nepali meal—and a very expensive treat, Buffalo Chili. They are both spicy delicacies, full of colour and calories for the long night ahead. Also, and maybe more importantly, many liters of Raksi, a sort of moonshine (with a similar taste to Japanese sake) locally distilled inside people’s houses, are displayed along the tables in metal jars for everyone to take. The drinking is categorical, an absolute certainty impossible to avoid. Be distracted for long enough, and you will be served another round by a friendly stranger until the stock dwindles to nothing.

On the top level, right next to the entrance, the family of the groom is welcoming the arriving guests, overlooking the celebration away from all the noise, the bride hidden from the guest’s sight. The groom is wearing a theatrically golden pointy hat, bordered by a patch of Yak wool, resembling the ones found in the steppes of Mongolia, sitting proudly with a straight back surrounded by his family members. On arrival, guests present their gifts and are greeted by the family, obliged to stay still all night.

It is an adventure in itself, reaching these pastures. The valley is secluded and far from the closest city, reachable only after a six-hour, bumpy bus ride from Kathmandu and a one-hour trek up the mountain over wiggly floating bridges and possible spectacular falls on scarped ridges. Even if not for the faint-hearted, its secretiveness, the wild exuberance of its flavours, the rich, multi-layered, welcoming culture, as well as the makes-you-want-to-move-there kind of dramatic landscapes make this region one of the most beautiful places ever to be seen by these eyes.

The night becomes more blurry. Let’s say it was poorly lit. The dancing continues, furiously unstoppable into the night. The local hits are played on a loop, celebrated each time they start, which, at least, helps one learn the dance moves. More food, more drinks, and more laughter. There is no earthquake that could stop this.

Alfonso Portabales is a Spanish travel writer and novelist currently living in London. He has published three poetry books and one novel with Editorial Efímera. He has lived and worked in Spain, Peru, Thailand, Nepal, Japan, Switzerland, and the UK.