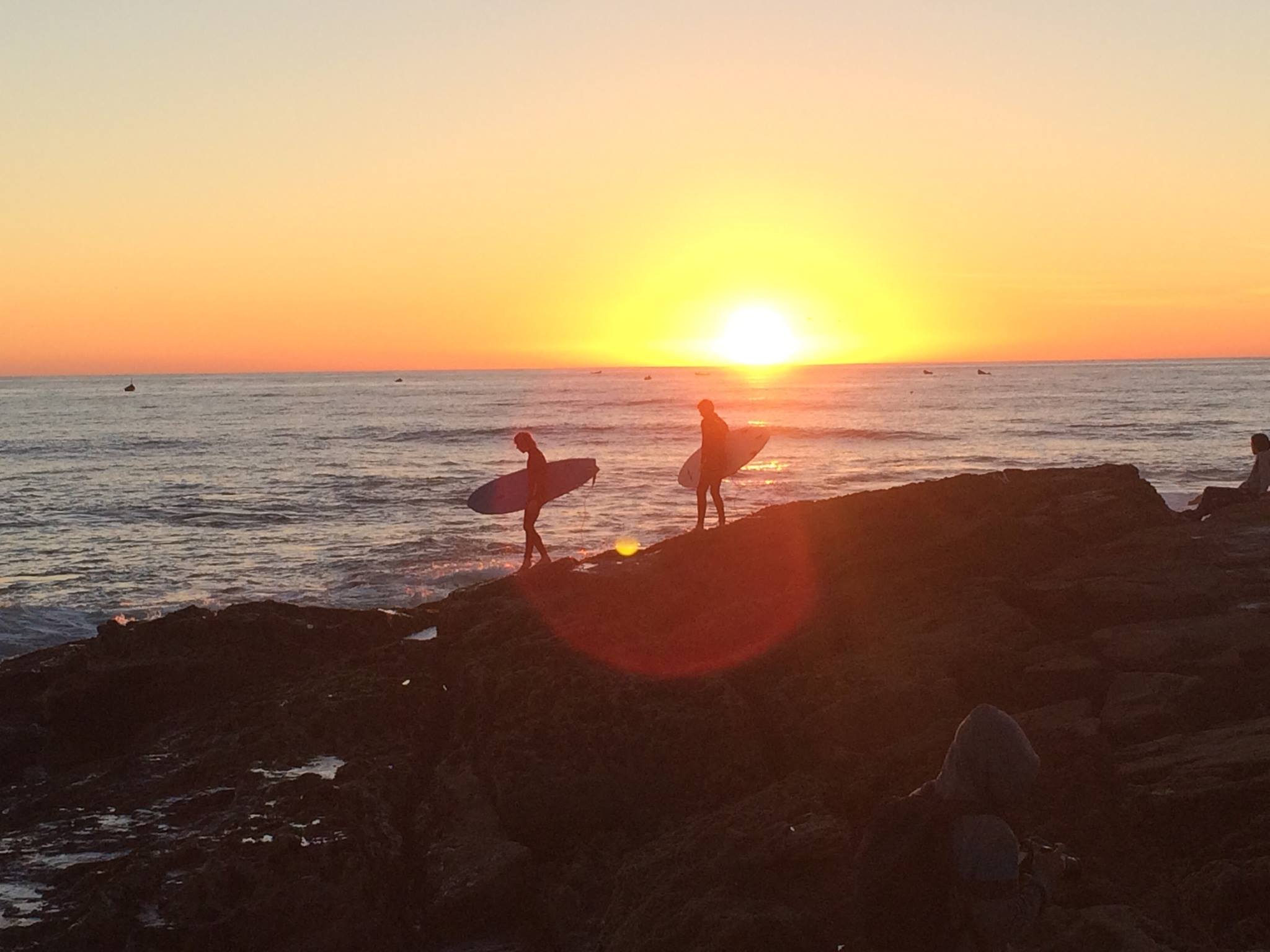 One Morning in Morocco

By Hannah AdlerJuly 12, 2019Africa
No Comments

Camped out near a remote Moroccan beach, our writer witnesses a surprising sight while brushing her teeth.

Going through the dilapidated entrance of a half-hidden local restaurant in Sidi Kaouki, Morocco, I swung a thin black plastic bag back and forth. Potatoes and courgettes hastily bundled together poked their dirt covered heads out of the top… damn them; we hadn’t eaten all day. My two German friends Finn and Alex found the last free spot right by the entrance. They sat down heavily, startling the table in front who were focusing on a card game. We didn’t care though; we were exhausted and sweaty from the day’s travelling.

The yellow colour of the walls was peeling away from the brick, and the tables were the cheap white plastic ones you find in someone’s garden. Strong voices and warm Moroccan laughter punctuated from pockets around the room. A 2005 box television crackled above us in the corner, but as far as I could tell no one was watching the washed-out image of the man in a suit on screen. The Moroccans were very proud of their royalty and sports, but this man obviously wasn’t involved in either. I weaved through the large bodies and tanned skins to the kitchen. Checking back on the boys, I could just make out Finn and Alex’s heads slumped on the table. I imagined the salt still glued onto the ends of their tousled hair, drying and cracking all over the table—no need for the saltshakers then. I could still taste it in my own hair from the few tendrils hanging out of my ponytail. We had been sweating and riding the famous Moroccan waves all week, and it had obviously had a lasting effect.

“Three tagines please,” I requested, handing over my sack of goodies to a vest-topped chef who was cutting a carrot at a hundred miles an hour. He appeared not to have heard me and continued hunched over in his tight-fitting, frayed, black apron. This was my fifth time in a restaurant like this, and I recognized the indecipherable nod that beat just out of time with his up and down chopping motion. I had also learnt, while navigating my way through the entirely male population of the restaurants, that no matter how much you pushed for sweet corn, they would not put it in a traditional tagine. In this new town, I had sullenly left it on the shelf with its brothers.

“200 dihram?” Alex asked, finally lifting his bronzed forehead and shoving a hand into his cargo shorts.

“150,” Finn replied. We had been travelling through smaller and smaller towns recently and had to conserve what money we had until we reached an ATM in Taghazout or Agadir. Until then budgeting was simple; Morocco is a budget seekers dream. For a small fee, tucked-away local restaurants would cook whatever you gave them. The low ceiling, bright light, and swarm of locals had brought us like moths away from the higher-priced surf hostel dinners. For us, Moroccan dinners had become synonymous with these garishly pink, thick plastic tablecloths.

We wolfed down our three tagines when they came, each brought over in a small, brown-glazed, conical dish. Just ten minutes later, the scent of fragrant chili, garden-grown ginger, and cinnamon hung around us, soothing us like friends. Women rarely came out on their own here for dinner. I meditated on this for a moment, stretching my legs out longer as if to make a point. The bark of the stray dogs pulled us away from our lull of smoke and saffron, and we paid the chef six dihram each before hitching up our bulging backpacks.

Leaving the laughter and good-natured competition going on behind us in our small haven, we headed up a dusty track. The sun had gone down, and an electric brown hue permeated the previously blue sky. Moroccan streets are as confusing as they are colourful, and I gladly followed Finn’s long German legs through the woven baskets and maroon-draped stands. I watched as his tattoos darkened with the light and let my mind wander: shops were closing, and leather goods were being dismantled. Red and yellow spice bags were drawn up; yellow powders which promised to cure baldness and a broken heart were packed away; and bronze bracelets dotted with little black stones were raked into a pile to be kept hidden until the next day.

We set up our tiny green tent on an exposed, quiet hill a ten-minute walk from the heave and bustle. I squinted at the ocean, unable to see it in the distance. Shivering, we happily bundled into our sleeping bags. I was still feeling the effects that only a home-cooked tagine can bestow and drifted into an easy slumber.

The next morning we awoke at 6 a.m. to the sound of Finn sharpening his knife. Much less of a morning person and slightly less of a Boy Scout, I stumbled out of my decathlon sleeping bag. I started to peel off the fibrous layers that had stuck to my sweat like sticky tape in the night. It definitely was not chilly anymore. The tent flapped behind me, and the silence of the morning struck me with a sigh.

The sky had returned to its pink haze from the morning before, and I looked out, finally, at the simmering ocean. It lay expansive and in anticipation for us to ride its green waves. The porches of the surf shops were visible over the road to our right. The hanging spider plants seemed to still be asleep on their porches, and the sea-battered surf boards were still propped up from yesterday’s hasty dismantle. I wondered if –

I unhooked my right ankle from my sleeping bag and nearly tripped into the wet grass.

I whipped around to witness thirty or so goats lolloping down the hill towards us.

Of course. We were camped on probably the only large piece of green land in the village.

I looked around for a shepherd to wave and smile awkwardly at him or her, but the sheep were on a solo mission. I moved out of the way, fast but delighted, hoping our tent was camped near the most nutritious patch.

Dazed, I wandered quietly back to our tent, the heat of which now hit me, unbearably humid. I retrieved my fleecy toiletry bag and squeezed out the last dregs of an already-finished tube of toothpaste onto my toothbrush. I strode out happily to watch the goats.

What a heaving, bizarre vision! White goats, off-white goats, goats with brown tufts where a beard should have been trotted past me purposefully. Black goats followed speckled goats, and kids bleated louder and in a higher pitch than the rest. They cried to each other, setting each other off. Looking back, I saw more coming. Down the dusty road, they ignored the odd patches of weeds that sprouted on either side and stuck with the wisdom of the pack. I watched on.

After three minutes there was not a single patch of grass that did not hold a goat. Their eyes twitched nervously when I made a sudden movement, and after a while I even had to stop the most relaxed brushing movement. My teeth, I decided, though disgusting, could bear to not be brushed. These goats took precedent.

And then it happened.

One of the female goats suddenly stopped and jack-knifed her hind legs in. She let out a primal bleat that startled me and the goats around her. A cacophony was kick-started. All around me, this urgency was echoed from goat to goat until I could hear the ones that stood where the hill met the road. And then they stopped.

I looked back at the tan mother. Later I would see she was sprinkled with cream spots of various shapes and had an adorable dark brown tuft on her forehead. But all I could see in the moment was the pink glob coming out of her vagina. Birth.

Excitement poured into my veins like an electric shock. Should I go into the tent and get Finn? Wake up Alex? Or should I stay absolutely still in case I scared her out of the birth? Was that even possible? Not something I wanted to find out.

In the midst of these questions my lilac TESCO brand toothbrush hung out of my mouth in a limp response. Toothpaste dribbled down my lips, and I started to cry. Only a little bit, but a tear nonetheless. The birth of life, the ultimate pain for the ultimate gift; sentiments rode on the feeling of privilege that bubbled up under my fleece. Not only that, but it was happening whilst I was brushing my teeth… the one act of the day that people consign to default mode.

I heard the unmistakable rustling of a German getting out of a tent, and I pulled him, bleary-eyed and protesting, to my side. I pointed out the scene in front, and as he followed my finger in astonishment, I noticed the rest of Morocco awaken. What had just been dark shadows were now sandy-coloured brick houses and tall, dark green palm trees. I could see stray dogs trotting up behind dusty, red cars and stray cats winding their way round the worn wheels. A window opened just over the road beside the hill, and a man stepped out with a tin cup of what I presumed to be coffee.

The sun was rising, and its harsh rays, I realised, would nudge these goats back to where they came from.

I was suddenly filled with panic for this soon-to-be mother. Would she have time to rest before escaping the crowds of umbrella-bearing, surfer spectators and make for the shade of the trees?

I looked back at her and could see she was now was fully straining herself, squatting so her bottom almost touched the ground. The pink blob was now brown and a lot more of a crimson blob.

The kid finally dropped, squirming and not yet screaming, onto the grass. An inward cheer materialized as she successfully brought herself round and stumbled down onto the floor to lick it.

A few of the goats started to wander over, but many left the new family to it. I think we would all appreciate the same. The bearded man was still sipping unhurriedly at his coffee, and I breathed, following his gaze out to the brightening turquoise sheet surrounding us. It would be hours before this town woke up. Finn had his hands nestled into his black hoodie pocket, smiling at the goat from underneath his hood. I rested my head on his big German arm, and all we could do was watch and finish brushing our teeth.

Hannah Adler is a British freelance writer, having written for and worked on magazine titles for Fast Company SA, African Independent, and Who’s Who in Cape Town. She runs her own blog, where she explores other aspects of travelling, theatre shows and her dreams. She has a Master’s in Creative Writing and is currently living in Dubai and starting a new platform for female writers.