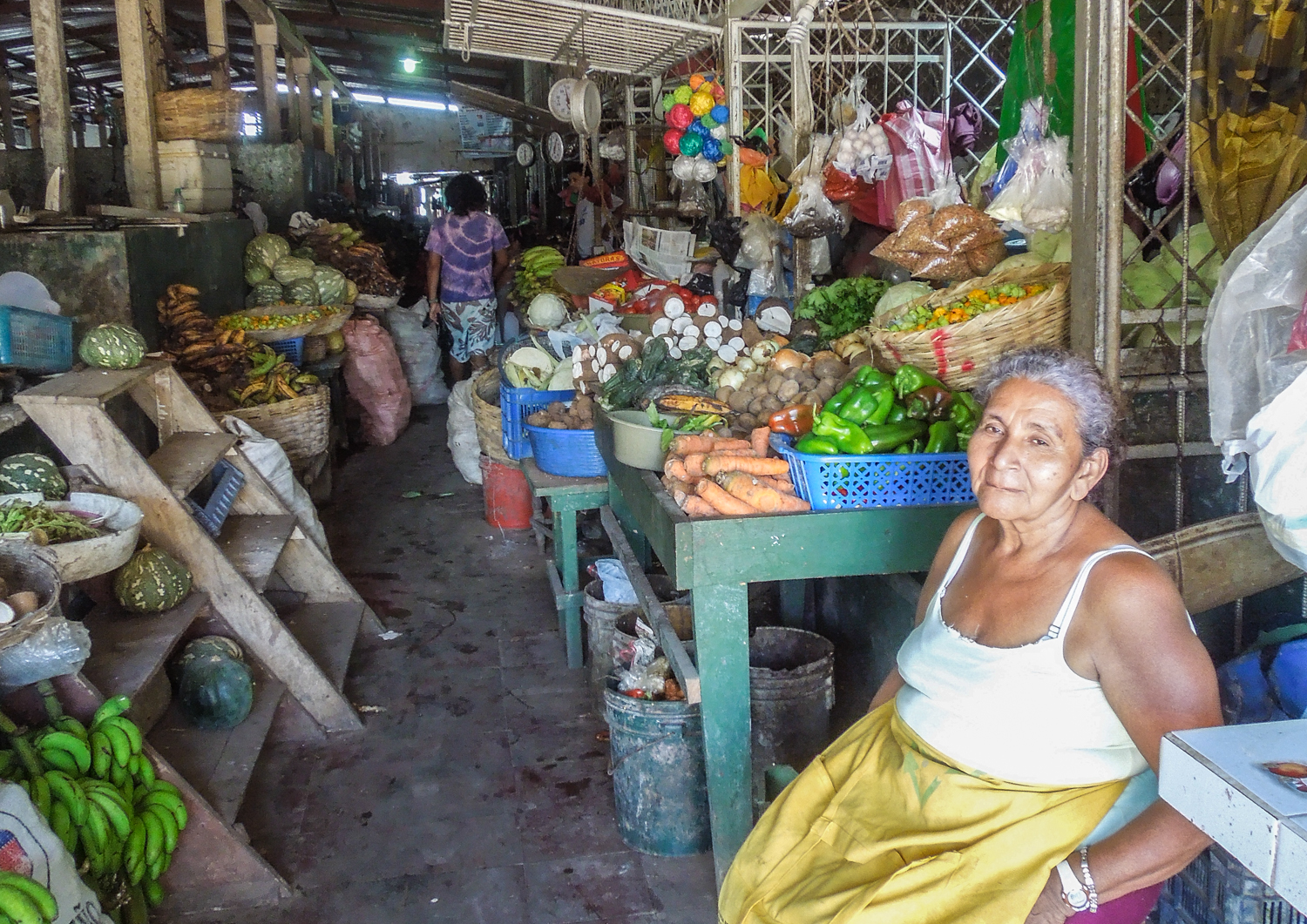 Eating Turtle in a Nicaraguan Market

In a small market in Nicaragua, a traveler eats a popular local dish that leaves a bad taste in her mouth.

I felt an indescribable relief when the boat finally arrived at the murky waters of Bluefields. After five hours of constant bouncing on a turbulent Caribbean sea, I was physically and mentally on edge. My body ached, my skin, unused to the power of the tropical sun, became dangerously red, and my fear of drowning somewhere along the Nicaraguan coast was fading away too slowly.

We bumped into the city’s chaos as soon as we left the porch. The residents, a multicultural mixture of Afro-descendants and indigenous Miskitus, Garifunas, Ramas, Ulwas, and Mayangans, were swarming the streets, selling fruits, transporting morning sea catch or just hanging out and drinking beer to reduce the impact of the stifling heat. As I was waiting for my backpack, an old black man started a conversation with one of my fellow travelers that I couldn’t follow – he was talking in a strange version of English that even native English speakers had a hard time understanding. Only later would I find out that the majority of people there communicate in creole English. Despite living in a Latin-American country, many residents of the region don’t speak a word of Spanish.

The city itself was a worn-out harbor where goods of suspicious origin are distributed to the country’s inland. A few miles away, there was a graveyard of rusted cargo ships, a reminder of a brighter history long gone. I remembered the warning of a tourist guide I had found a week ago in a youth hostel: Bluefields had a reputation of being one of the ugliest and most dangerous cities in Nicaragua, with high rates of crime and unemployment. But despite the filth and stench ingrained in the facades of colorful houses, I was euphoric to finally discover the Nicaraguan Caribbean. After all, Bluefields was only an intermediate point on my way to Corn Islands, a paradise where I could finally eat cheap lobster, drink rum with coconut water, and relax on a deserted beach all day long.

We were eight backpackers travelling together for the last three days. The four Basks headed directly to the cashier’s desk and bought a ticket to Big Corn Island. Their boat was leaving in an hour. Adam and Steve, two Englishmen, Sarah, a South African girl, and I were indecisive about our near future. Someone had mentioned a magic lagoon just north of Bluefields, “a true gem with crystal clear water and an authentic experience with zero tourists,” so we were reconsidering our plan to sail straight to the island. As we were wandering the streets, getting tired of breaking our backs carrying 40-pound backpacks, someone blurted out: “I’m hungry. Let’s eat something.” It was an excellent idea. After all, it was lunch time.

The nearest cheap choice to appease the hunger was an overcrowded market where the chaos miraculously worked by some strange rules. The place was dark and filled with the smell of constantly reheated goulash, but it was obviously popular with locals since we barely found a place to sit. Squeezed on an uncomfortable wobbly bench behind the ragged wooden table, we patiently waited to be served. A bulky woman with a greasy apron started to lift up the lids from nearby bubbling pots, describing menus of the day.

I stared at the meat, unconvinced by beef or chicken. I didn’t want a familiar meal, the regular goulash-resembling stuff my mom cooks at home. I wanted something new, something exciting and exotic. I felt the desire to experience the same ecstatic reaction as narrators of travel documentaries do after finding a new, weird-looking food.

The woman soon identified my uninterested gaze. In hopes of a more favorable reaction, she opened one last pot and said: “Well, we also have turtle.” She must have thought that the dish wasn’t appealing to me since she’d smoothly left it out while listing the offers. But this was exactly the thing that made my heart beat faster. This was the exotic food I was dying to try. I nodded my head and reached out for a chipped plate full of rice, beans, tortilla, some sloppy slices of cabbage, and pieces of turtle in a chili sauce.

With the excitement of a child, I joined my fellow travelers at the table. The first bite was supposed to provoke an explosion of tastes and fly me to gastronomic heaven. But none of that happened. The meal was pleasant enough, but besides that, honestly, nothing special. It was soft and, ironically, tasted like something between beef and chicken. It satisfied the hunger, and that was it.

For the next couple of days I stupidly thought that by eating a turtle I was successfully immersing myself into the Nicaraguan culture. After all, killing and consuming turtles seemed so normal – their meat was sold like ripe mangoes on every street corner. People were stopping at huge open shells that revealed a not-too-appealing interior and buying liver, heart, meat. Artisans were selling earrings, necklaces, and all sort of boxes made of turtle shell. Men were drinking raw eggs with the false hope of increasing their sexual stamina. Dead turtles were everywhere.

Only after inquiring with the locals did I realize that many of the species of these beautiful marine animals are on the brink of the extinction because of over-fishing, poaching of eggs at nesting beaches, and habitat deterioration caused by coastal tourist development, climate change, and pollution. Although killing turtles is strictly prohibited in Nicaragua, the local authorities ignore the ban and rarely chase poachers.

This revelation caused a bad taste in my mouth. Because it seemed so normal and part of the tradition, I ignorantly participated in the extinction of an endangered animal. After that, I remorsefully promised myself that I don’t need to try everything in the name of discovering foreign customs.

Martina is a freelance journalist with an endless desire to travel.