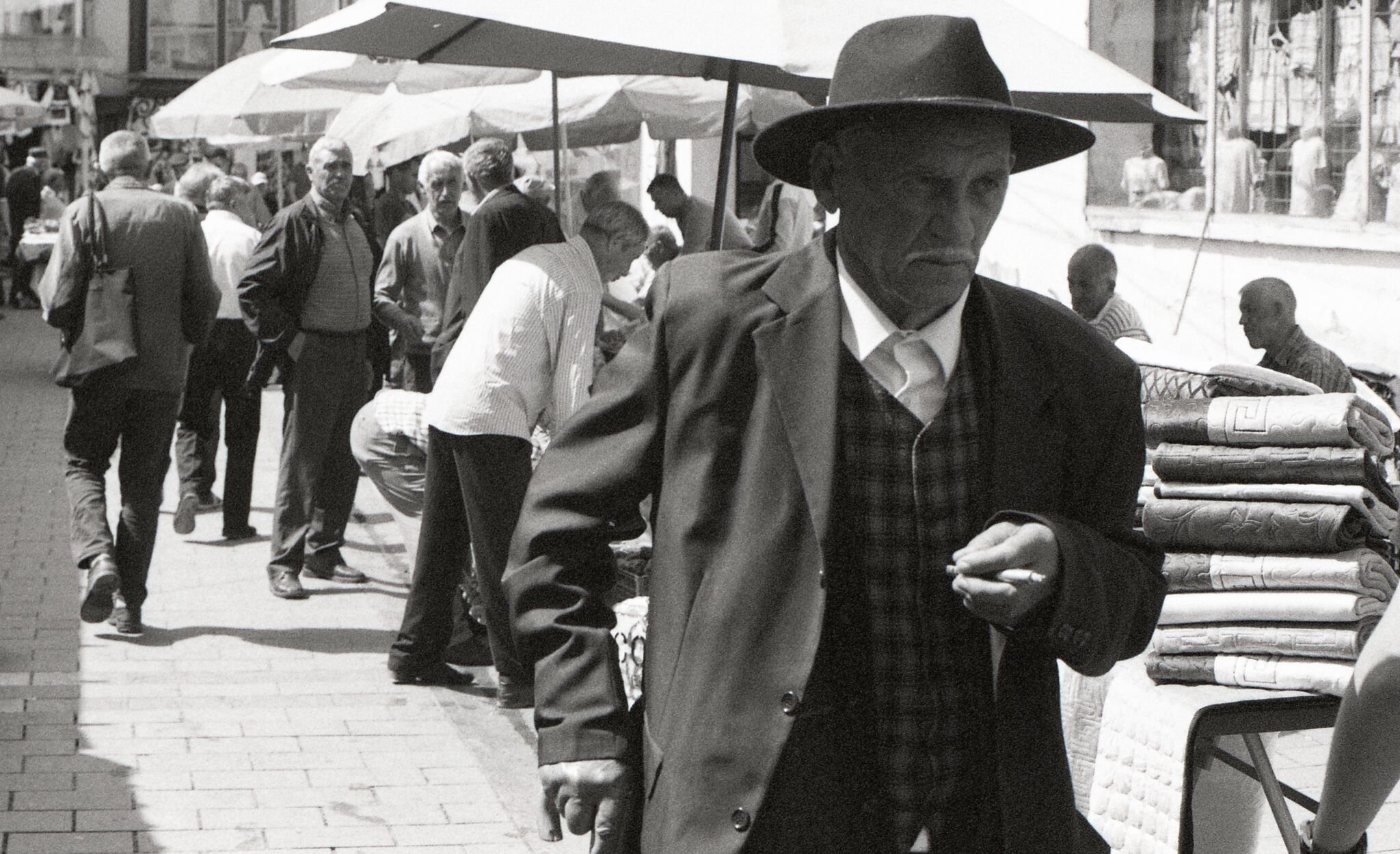 A photojournalist looks at Kosovo through the lens of a camera and gets a glimpse into the events that created one of the world’s youngest countries.

When I was 11 years old, I sent United States President William Jefferson Clinton a handwritten, sanctimonious letter to tell him that I thought he was an asshole.

We — we the American nation, not we, Bill and I — had been heavily involved in the ongoing strife in Bosnia, and the news had reported that he was fixing to get us similarly involved in Kosovo, which was growing increasingly itchy under the yoke of its Serbian overlords. I felt strongly that the U.S. needed to quit its custom of adventuresome wars, having watched Peter Jennings narrate bombs over Bosnia and Baghdad for four years straight.

I told the president, in the most severe terms a fifth grader could muster, that we had no business sticking our noses further into it. Months later, I received a carefully worded reply — its boilerplate surely in a file somewhere, marked ‘reply for precocious kid, re: Yugoslavia’ — informing me that America had important political and humanitarian obligations. What it really meant, of course, was that Kosovo was a house on the road between where we were and where we were going, and thanks for your letter, kid, but we’ve got places to be.

Five years later, he sent in American soldiers, sailors, and airmen, completely disregarding my crucial advice. Today, seemingly every town in Kosovo has a street named for Bill Clinton, and not so much as a back alley named for me.

It is 5 am, and I cannot sleep as I sweat in my damp, stuffy room in the town of Prizren, a suffocatingly hot medieval burg split by a cold, rushing river and dominated by its massive, usually empty mosque (an overwhelmingly Muslim but largely secular nation, most mosques sit largely unused, and the restaurant adjoining this particular one offers pork chops and beer).

I’ve been sent, of all things, to test film; the Lomography corporation has given me a bag full of their new film, something called Berlin Kino made to resemble Cold War film stock, with the instructions that I can take it anywhere. I’ve had the film rattling around like dice in my camera bag across most of this small nation for the last few days, but at the moment, three little rolls are sweating on the nightstand, presumably glad not to have developed sentience and feel this heat.

We — my film and I, still not we, Bill and I — go for a stroll to try and cool down in the false light of early morning. I sit down at the only café, where I order a coffee and cup of ice as the town’s only other early riser — or perhaps stunningly prescient somnambulist — takes his seat at the adjoining table.

Kosovo is one of the world’s youngest nations, having fought a war for independence at the turn of this century and earned a seat in the United Nations in 2008. The Kosovar flag, which looks like a dollop of yellow bird splat on a field of blue, is almost completely invisible there; the red banner of neighbouring Albania is ubiquitous. The crux of their revolution is that they have nothing in common with Christian, Slavic-speaking Serbia; nominally Muslim and completely Albanian-speaking, they shared neither a language, a religion, nor a culture with their government. War came, won by U.S.-made, NATO-launched missiles into Belgrade, and today Kosovo is recognized by 113 countries — but not neighboring Serbia or Apple Maps.

As with most places whose recent history and reputation are defined by war and genocide, tourism here is nonexistant. And it’s a shame: Kosovo is, if you’ll pardon the simplicity of the thing, a pretty and paradoxically unspoiled nation. In some quarters, there may be more cows than cars. The culture is overwhelmingly welcoming, the land impressive without being imposing.

If God dropped you unknowing from the heavens over Kosovo, you’d most likely awaken in a poppy-filled lea. You could be forgiven, on coming to, for thinking you’d tumbled down into the Swiss alps — soaring, snow-capped mountains punctuated by frosty lakes, but with its quaint, red-roofed villages replacing their bell tolling little white steeples with singing, towering minarets.

It is, in its way, a charming place. The people are good-looking, almost exceptionally so. They are also young. Very, very young.

Yes, the landscape is scarred, from border to border, with memorials to the fallen: occasionally, epic and visionary statues, but more typically black stones with logos for the Kosovo Liberation Army paired to photogravures of the forever-young faces of the locals who died in the war for independence — these two brothers from this street, those two cousins from that.

They are everywhere, more often than not stony and serious, holding machine guns next to poems exaggerating their teenaged eloquence and excellence. Ghosts in onyx, they’ve given way to teeming streets of wild, electric youth growing up with their new nation.

The children of Kosovo — the ones strolling today, not the ones whose faces are carved into rock — are physical, boisterous, hopeful, life-lusting, curious, everywhere. The energy in them is unmistakable, the electricity of them is real and palpable and, as Serbia learned around the time they were all born, that alternating current inside the Kosovars is a third rail: you touch it, and you die.

Most towns feel a bit rough in spite of the optimism of the crowd, and it all feels a bit bombed out in a Third Man, Vienna-after-the-war kinda way. But under it all is a core of beauty and enthusiasm (and rampant expansion) that feels like it’s going places.

It still feels a bit wild, but today, when you hear gunfire ringing out from the rooftops at night, it is groomsmen at weddings: the sound of matrimony, not massacre.

The war, for most extents and purposes, is as dead as Jacob Marley’s breakfast; its heroes, common men raised to grandeur in their graves, are hand-carved to watch over all, but none of the canoodling teenagers strolling past them seem to notice. The boys rough-house in the street, strut for the attention of the girls; the girls pretend to ignore the boys, form giant covens as they wash their necks, faces, hair with clear water from the town spigot in front of the mosque. The couples kiss and fight and kiss again; the dead stay dead. Even here in Kosovo, whose very name is synonymous with violence, life is for the living.

And here I am, sweating at 5 am at a café, with Prizren’s only other riser, Nizar, sitting at the table next to me, looking out with me at all the streets yearning for tourists, at all the youngsters that aren’t there. Nizar’s English is almost perfect, and we end up falling into light conversation, mostly about the fifteen-foot statue behind him of a hero from Prizren who died in the Revolution. Today, he looks out over the river past a number of destroyed buildings, closed churches (over 155 Christian churches have been destroyed by vandals since the nation’s Serbian Christians were expelled two decades ago), new office buildings, and sleepy hotels, all cupped in the palm of the beautiful mountains that form the town’s valley.

I’ve been looking at monuments of dead young men from the moment I crossed the border, and I ask him whether he thinks it was all worth it. He grabs my arm so hard he takes a few hairs between his fingers and emphatically replies yes. ‘For the first time in a thousand years, our house is free,’ he tells me, a firm fire in his eyes. He sees me glance subconsciously, as I’m tethered to a phenomenal burnt warehouse in the far, far distance. ‘There is an Albanian proverb,’ he says. ‘Even the King’s garden has a thorn or two.’

I watch a young man on his way to work open and close his top shirt buttons indecisively, again and again, as he watches his reflection in a shop window. The bartender brings Nizar and I two menus we do not want.

Like most crossroads nations, the influence of a thousand years of occupation lives most in its menus, and in Kosovo the cuisine is a farrago of history; the Ottomans left not only their mosques but their Turkish coffee, the Russians their strong black tea and embrace of cigarette smoking as a national pastime. The food, bequeathed by the Austro-Hungarian empire, is good but strictly carnivorous: grilled steaks, chops, and qebapa sausages fill every menu, with just the inclusion of the Communist-era shope salad (cucumbers, tomatoes, cheese, bowl) to provide the appearance of a balanced diet. The only truly commonly consumed vegetable in the nation is tobacco.

We decline the menus, and Nizar continues drinking his Turkish coffee, keeps sipping on his cigarette, as the sun rises to rub his shoulders. The waiter brings us, as complement, two small little platters of meat- little cubes of some former creature, placed haphazardly on peppered crackers.

I’m no vegetarian, but it’s getting tedious. Why is everything here meat, I let slip, not meaning to complain to my new, one-hour friend, but doing so anyway.

‘It is what we have. And we need the energy! We are very energetic. This is a young country,’ he says, that massive statue of a man with a machine gun right over his shoulder, ‘and young things want love. You need blood for wars. But you want meat for weddings.’

B.A. Van Sise is an internationally-known photographer and the author of the visual poetry anthology Children of Grass. His visual work has previously appeared in the New York Times, Village Voice, Washington Post and Buzzfeed, as well as major museum exhibitions throughout the United States, and his written work in Poets & Writers, the Southampton Review, Eclectica, and the North American Review.