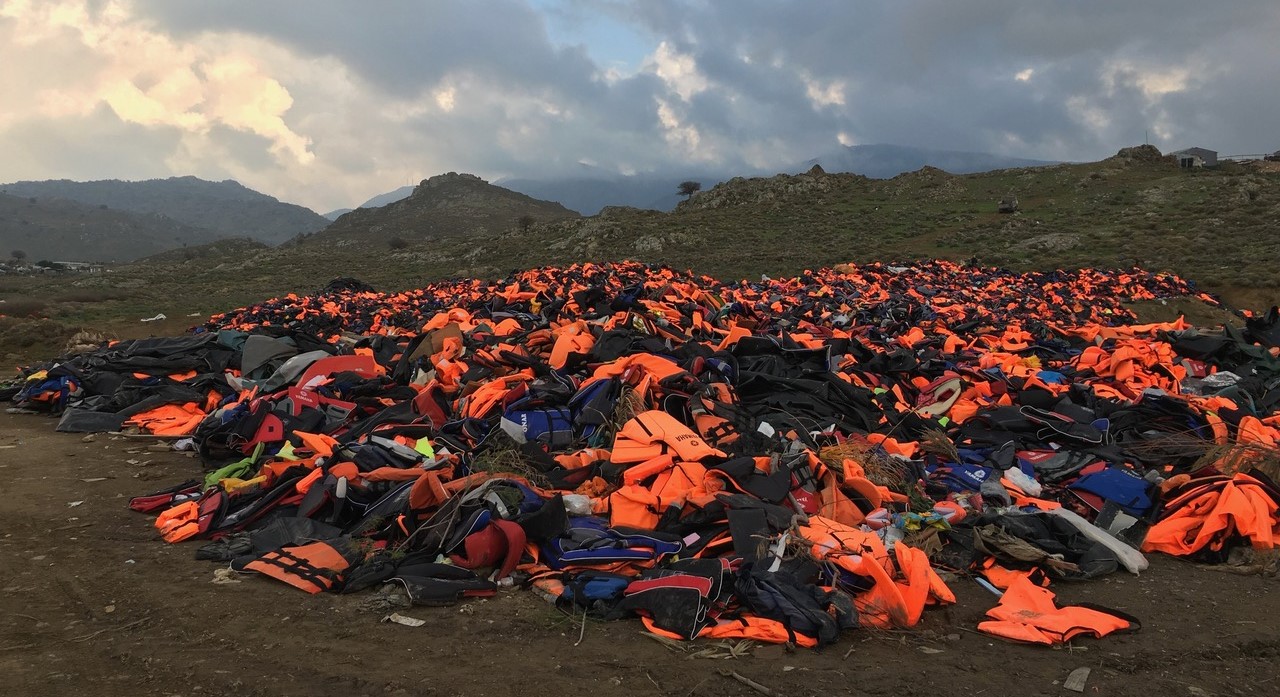 In the midst of the refugee crisis, a lifeguard in Greece encounters a bizarre and frightening symbol of human courage and fragility.

Somewhere north of the mountains on the island of Lesvos, Greece, in the North Aegean, lies a peculiar graveyard. I travelled there on a four-hour break from lifeguarding during Lesvos’ refugee crisis.

It doesn’t take long to get there. Driving there takes around ten minutes from Molyvos, and the road is bumpy as it snakes through the undulating landscape. In a different time, this road might have turned into a trailhead at a dilapidated park, where one might see a hiker enjoying the outdoors while still close to human habitation. It makes sense for the graveyard to be here — close enough to the coast but far enough away to be hidden.

Broken down fishing ships line a chain-linked fence between two small hills. The fishing ships intrude into the serenity of the hills, and a black cat sits on the bow of one decaying boat, licking its paws.

We drive through a small gate. To my left I can see the rotting remains of more broken boats outside the gates, reminders of Greece’s austerity and Northern Europe’s indifference. The sky is grey and heavy, depressed, as if gravity is working overtime.

‘There it is, re,’ Kostas says solemnly.

We drive down into it, the ‘graveyard.’ Our tires grip the slick mud and sink, making thick, permanent impressions in the mire, as if our intrusion must be recorded or remembered somehow. The life jackets pile up to three metres high, stretching far into the distance, life jackets of loud, radiant orange and yellow and red. Luminescent and garish, they reflect more light than the sun can give, as if they have their own energy. We park in between two hills of the jackets in the mud, which is thick and sticky as I exit the car. The air feels ionised and dense.

I try to count them. Konstantina told me that half a million people came through the north of Lesvos in 2015. I see her climbing up a hill of flotation devices. Some of them fall around her as she tries to climb to the top.

‘Come on,’ Konstantina calls down to us.

I swallow some saliva to soothe my parched throat and step onto a life jacket in front of me, but it slips from under my foot, and I fall forward, forced to splay my hands to catch my fall. I climb on hands and knees over these jackets, these sosívia, and the higher I climb the more I fall. My legs sink deep into the pile, like quicksand, and I become nauseous.

When I reach the top, I can see the piles of life vests have been dumped in a valley, a mountain formed within a chasm. I reach down and grab one vest, a small one, one my three-year-old niece Lily might wriggle into. It feels surprisingly light, like the first time I held my little niece moments after her birth, and I think to myself: This is all she is? Lily’s fragility haunted me.

I rip open the life vest, curious to see what is inside the bright yellow cloth. Reaching my hand inside the guts of the vest, I grab a small piece of what looks like packaging material or asbestos. This would not allow someone to float. This is it?

I look up — it’s Kostas. He’s struggling with a deflated pool toy, which has wrapped itself around his leg, and he tries to shake it off. Suddenly, Alex jumps towards Kostas and tackles him on top of the mountain, and the rest of us watch and cheer as they wrestle each other on the spongy material, laughing and giggling. I take a step and sink in the pile up to my thigh, as if I’m in a pit of plastic balls made for children to play in.

After the fight, Zack gathers everyone together for a few photos, and Chelsea beams with smiles and happiness. ‘Smile,’ Zack tells us, and I force myself to. I walk over to Chelsea, and her smile fades.

‘The night shift last night,’ Chelsea begins. ‘There were so many people on those little boats.’

‘How many boats were there?’

‘I think we had around three, but there were eight or nine in total that landed last night.’

‘Oh, no,’ Chelsea responds. ‘Most of them weren’t wearing them at all. Apparently you have to buy them in Turkey for eighty dollars or something before you go to the shore.’

Chelsea looks at me.

I step on a child’s water wings, those little toys that make children look like Popeye — the floating biceps. They are long-deflated and muddy, the decorations of smiling fish barely visible through the mire. Our feet sink into the life jackets, into the unknown depths of the mountain, into this restless resting place.

‘So many life jackets,’ Chelsea repeats. ‘Do you think…’

But the air swallows her thought.

‘What?’ I ask, looking at the water wings, and the lifevest to which it clings. This one looks strong and tough, built for its life-saving purpose.

‘How many p—’ Again her voice fades, taken by the wind.

We slide down the hill of life jackets to land heavily on the ground, sinking into the muck. Above us the clouds look malignant, and the wind swirls around us like when a downpour is imminent. Zack takes more pictures of the graveyard in the background. A few spruce trees stand, lonely and watchful, atop the hills in the distance.

The life jackets shriek silently, invasively, in dozens of languages and hundreds of dialects, protesting, crying, pleading, fighting for their lives, refusing serenity and calm, screaming against the doomed path of history.

‘How long do you think it will take until the earth mixes in with the jackets, through rainstorms and wind and mudslides, until they are buried, until the life jackets are invisible? Until there is no difference between this hill and that one?’

‘I’m sure that one day there will be a memorial, or a museum, or maybe a cross to show what happened here.’

We walk slowly back to the car, back to our night shifts and our work, and back to the living.

Perhaps in the future, hikers will climb atop this hill and frown as they feel themselves sinking ever so slowly into the earth below, wondering why the air feels so thick and difficult to breathe.

J.D. went through a (hopefully) early midlife crisis, and thinks humans probably shouldn’t have left the trees. When he doesn’t work in humanitarian aid, he lives in Amsterdam.