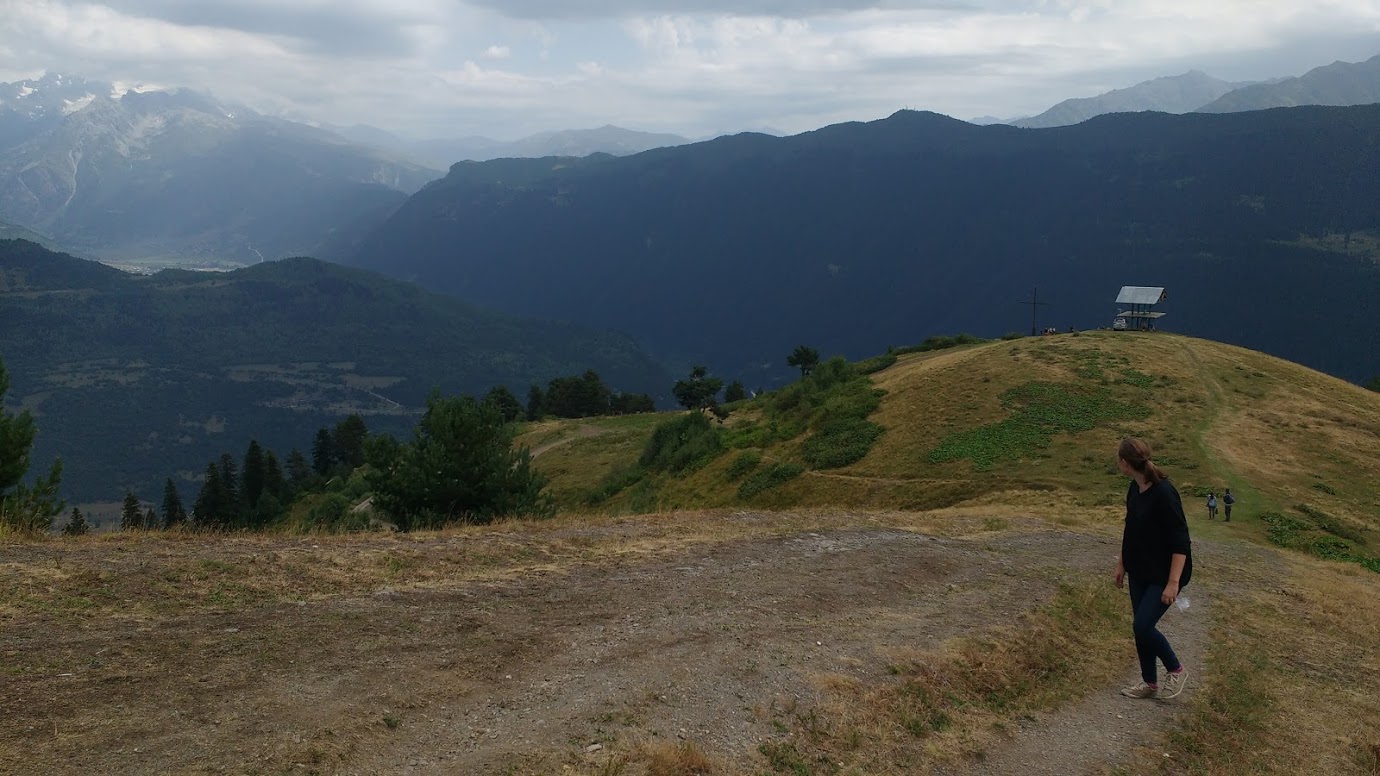 Where Demons Fall in Love

Having fallen in love with the Georgia of 19th-century Russian poetry, Katrina Keegan set out on a pilgrimage to see the country as it is today.

The valleys of luxurious Georgia

Roll as a rug into the distance;

Georgia is where demons fall in love. I learned this from the poem “Demon”by Mikhail Lermontov, one of the many Russian writers who made their pilgrimage to the intoxicating mountains, where it is hard to tell if the blur of memories is caused by wine, fog, or awe.

When thirsty for knowledge

Through eternal fog, he followed…2

I followed them. I brought my Russian-speaking lover, Russian words I had been learning for a decade, and my Russianized eyes, filtering Georgia through nineteenth-century Russian poems. Throughout the former Soviet Union, people think that Georgia is the best. Best politics; least corruption. Best wine, best romance. Best mountains. Best monasteries. Best God?

And all around wild and wonderous was

After all, even demons could be holy in Georgia, a country christened in 338 AD up on a cliff overlooking Mtskheta, where St. Nino lead the Georgian king to erect a cross.

Mtskheta is the religious capital of Georgia. I could never pronounce it right when asking around at the bus depo, but I think I’ve got it now.

Mmm, as in how you tell your tour guide that the churchkhela you bought outside the church is tasty. Churchkhela is nuts on strings encased in dried fruit jelly dripped into a long point. They look exactly like the stalactites hanging from the cave in Kutaisi sheltering the Heart of Georgia, a glistening rock with arteries and lobes.

There are a lot of churches near Kutaisi, with thousand-year-old frescos, on cliffs overlooking rivers and red-roofed towns. It is easy to become numb to history and beauty without a guide to give it meaning. Luckily we had Vaso, a friend of a friend. He talked to us using our Russian words, but he told us about his Georgian words. For instance, in Russian, the word for pregnant literally means “burdened.” In Georgian, it means “two souls.” Perhaps this helps explain the national reputation for generosity. If two souls can share the same body, they are certainly not burdened by people outside it.

Then ts, pronounced as one mushed sound, like what you might hear a woman on the church stoop say when calling pigeons to share her bread. Vaso told us that if Georgians get a lari they will spend it immediately, not just on themselves, but on everyone around them. He said they need more of the American mentality of saving and planning for the future. On the way out from the church, a beggar asked Vaso if he had change to spare. “One moment, grandmother,” he said, retrieving a few lari from his car.

Vaso also gave us a gift, prayer beads. He told us they were to remind us of Georgia, a struggling little nation that could use our help — by “us” meaning the West, Western money and Western mentality, so that Georgia would finally be free from three hundred years of Russian oppression. He told us about the suppression of religion in the church. He asked if we knew that 20% of Georgia’s territory in Abkhazia and South Ossetia is occupied by Russia. Of course I did. (Incidentally, Lermontov set my favorite novel in Ossetia.) He told us about the imposition of the Russian language, in Russian, without a hint of indignant irony.

Kh, a sort of throaty exhalation, with an extended K that sounds like the steam from a tea kettle just before it whistles. At the same time, an H from your throat, like the rumbling of boiling water. In Georgia, they make tea the Russian way: concentrated tea mixed with water. Georgians would probably object to calling it “the Russian way. ” I have no idea where the practice originated. I was performing a pilgrimage to a land where wine-flavored epics are more real than sober cups of tea.

Long, philosophical toasts in Georgia are the stuff of legend, the kind of cultural tradition you hear about on every guided tour but never expect to experience in person. When Vaso asked us over for drinks and started making toasts, I felt giddy; it was too much of a stereotypical experience, like vodka shots in Russia. One of the toasts was to the friendship of nations.

After three or four toasts accompanied by three or four shots, Vaso said it was my turn. After a brief panic, I plunged into a toast of my own to learning.

I am not sure, though, if I should trust what I learned. We so rarely glimpse the authentic, especially in a country set up for tourists like Georgia. I was probably aggrandizing the importance of what he said, thinking it representative of Georgia as a whole. The experience was meaningful but in a human-to-human way rather than in a human-to-culture way. In Georgian, a soul isn’t burdened by another soul. But a soul can be burdened by a culture, by three hundred years of foreign rule trying to snuff out the churches’ candles and impose a language that the soul would later speak to foreign tourists who had come to Georgia to live in Russian poems.

I think Vaso was wrong to toast to the friendship of nations.

Finally eta, the easy part. In Russian, eta means “this is.” It is how you point to something and give it a name. Eta churchkhela. This is churchkhela. Eta chai. This is tea. Eta Gruzia. Gruzia, similar to the Turkish Gürcistan of the Ottoman conquerors before the Russians, similar to the English Georgia of the West invited after the Soviet Union collapsed. But Vaso told us that originally the nation had a very different name: Sakartvelo. I repeated Sakartvelo again and again, wanting to remember it.

I didn’t. With the exception of my day in Kutaisi with Vaso, I continued to picture Gruzia as Lermontov made it, where “wine flows”4 in the “sweet-passionate heat.”5 I got tipsy on wine on my first day and slurrily (but successfully) negotiated down the price of a collection of Russian fairy tales from a bookseller on the street. I felt something like “sweet-passionate heat” for the Russian-speaker I brought with me; very drunk after toasts with Vaso, my mind twisted the beautiful explanation of the word for pregnancy into a impassioned whisper to my lover that I wanted to have his baby.

We went where Russians were. We visited the museum-pilgrimage site that the Soviet Union set up in Gori, the hometown of Stalin: the father of an empire with children on his lap, complimented by Western leaders; a young heroic revolutionary surviving a prison camp (no mention of the millions Stalin killed in prison camps). And, of course, we visited Lermontov’s mountains that,

The heart of Georgia bulges from a cave in Kutaisi, and its brain has bounced between Mtskheta and Gori, but you can feel its breath only in the mountains.

A pilgrim can’t just be ferried around to churches and museums. A pilgrimage means suffering a journey. My suffering was when my lover told me in a small town in the mountains that we would break up soon after leaving Georgia. My journey was to the top of a mountain, where a giant metal cross marked the halfway point of our pilgrimage to see Mt. Ushba, just a mile from Russia.

The guidebook said going straight was a difficult shortcut, so we turned right along the meadow. The path narrowed into a thicket of trees, finally opening to a clearing. We picked the most path-like direction and scrambled up a ridge. We looked back. There was no path at all. We realized we had probably been following a goat trail. We tried to go back the way we came, but nothing looked familiar. We were lost.

After a good deal of panic, inching down the mountainside, and finishing half our water, we finally found the meadow. I looked up and saw the cross high above us. And I resolved to see Mt. Ushba anyway.

After a long hike, we made it up the mountain and on to a flat area of golden grass. We looked back and saw sky below us. We looked left and saw the cross.

We turned right to look at the path onward, following the ridge of the mountains into the distance with spectacular views on both sides. That path, that journey to Mt. Ushba, was supposed to be our reward for climbing the mountain. But we only had a few sips of water remaining. We would barely make it back down, let alone get any further. We would not see Mt. Ushba.

I was crushed. Already drained emotionally from the panic of getting lost and the impending loss of my lover and drained physically from climbing the mountain, this realization drained me spiritually. I barely noticed the beauty around me. My awe was exhausted. Too much wine, too much politics, too much romance, too many mountains and monasteries. We sat on the hillside and looked back to the cross, stoic against the grey sky.

However, in order to remember,

Here by the road, above the cliff

Passionately they lifted a cross7

It wasn’t until I left that I realized: I the nation, the Russia-America, was making a pilgrimage to the mythical Mt. Ushba, to the idea of Georgia. A demon-in-love led me there. It was a burden. I failed.

Instead, I the soul made a pilgrimage to a cross erected by other souls, the people of Georgia.

Katrina Keegan is a student studying, living, and writing all things Eurasia. She is a regular contributor to Russian Life and Verge magazines, and her work is forthcoming in Bootsnall and Glint Literary Journal.