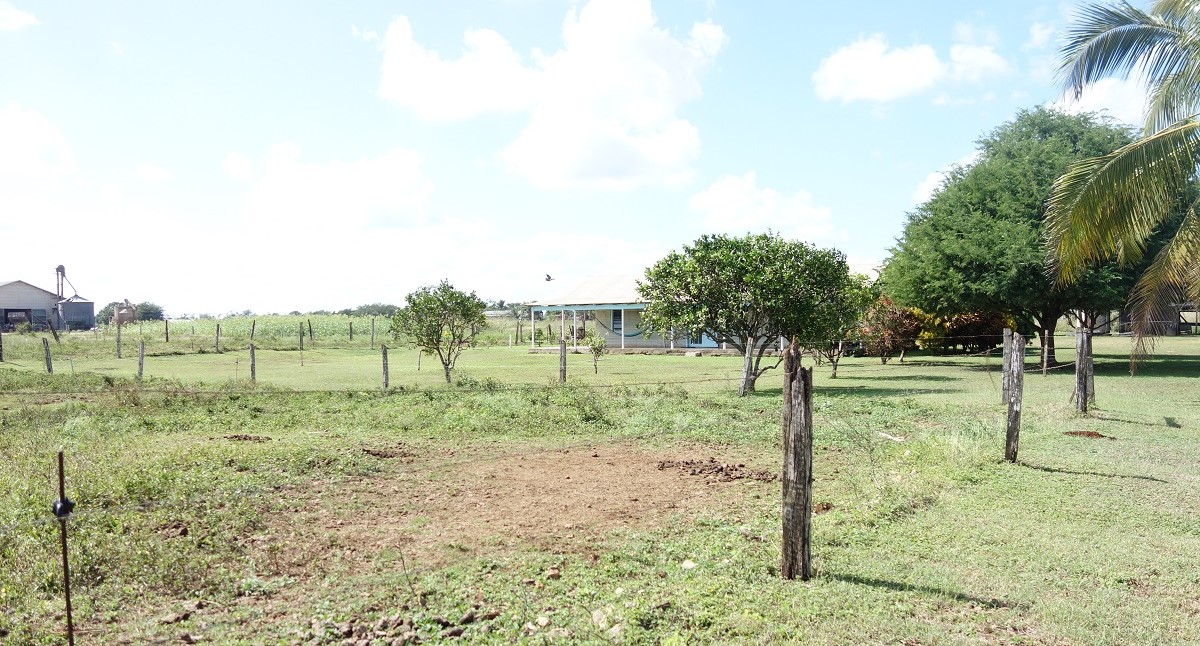 The Mennonites of Mexico

A visitor to Mexico stumbles across a Mennonite community living by a dusty road near the shores of a lagoon.

I’m riding my bike over the heat-shimmering asphalt. My eyes are fixated on the horizon to my left, where the lagoon of the seven colours stretches. It’s an enchanting sight that has earned the small town of Bacalar its distinction as “Pueblo Magico” (Magic Town). For a brief second, something to my right captures my attention…a child’s voice. I slow down and force my gaze towards the street again. Getting closer to the boy on the sidewalk, my pedaling feet come to a halt, and I look at him, dumbfounded. He is selling biscuits, but I’m obviously not startled by his biscuit business. It is his appearance. He is wearing dark blue dungarees and a straw hat. Underneath, smooth, white-blonde hair looks out, and ice-blue eyes flash from his freckled face. Slowly, like a Polaroid, my brain tries to make sense of this scene. Without much success, it leaves me with the question: Why is a Scandinavian boy selling biscuits on the roadside…here in Mexico?

“Curiosity killed the cat, but satisfaction brought it back,” I tell myself a few weeks later. I am about to take a big step out of my comfort zone. How am I even supposed to find someone who is willing to talk? What if they don’t like people snooping around? Still arguing with myself after traveling 20 minutes by car from Bacalar, I enter the only shop of the small parish. I am somewhat surprised to see shelves stocked to the brim with Coca-Cola and Doritos. A well-organized tool section overshadows the rather humble food section. “There! On the counter! Bread! That’s my gateway for an interview!” I exclaim to myself.

Ten minutes later I am sitting at an over-sized dining table made of solid, dark wood, along with the original producers of the bread I just purchased. Baking trays with dough rolls are sitting on one side of the table, while the other has room to roll out the dough. There is a strong girl, almost two heads taller than me but a few years younger. Her hair is not as bright as that of the boy I had assumed to be Scandinavian. It’s more like a dark wheat-blond, but she too has freckles on her light skin. While her coarse hands skillfully turn the dough into long sausages, a girl named Ewa chatters away. Unfortunately, I don’t understand what she’s talking about. She speaks German but in a dialect reminiscent of Low German or Dutch. I look at my notes, and then at Ewa’s mouth as the stretched, friendly-sounding lute continues to flow. “Well, I haven’t really thought this through, have I?” I ask myself. How can I write a report about the Mennonites in Mexico if I don’t even understand their language?

Of course, I had informed myself about the faith community. The Mennonites owe their name to the theologian Menno Simons, an Anabaptist at the time of the Lutheran Reformation in the 16th century. Their “scandalous” demand had been the abolition of infant baptism, and because of their radical interpretation of the Christian faith, the Mennonites have always experienced exclusion and expulsion. In particular, their belief in nonviolence forced them to relocate again and again to avoid military service in times of war.

Thus, the First World War triggered another wave of emigration of the remaining Mennonites in Germany. Many fled to Canada. But when school education became compulsory, the strict conservatives moved to the US, Mexico, or even further south. Due to the geographical separation and the varying degree of rigor, the 2.1 million followers of the Free Church are hardly lumped together. Their lowest common denominators are adult baptism, the community understanding as a free church, and a pacifist attitude. While the Mennonites in Europe are considered liberal, Latin America is home to Old Colony Mennonites who are skeptical of modernity. However, each community decides for itself how much it opens up to technological progress — or closes it off.

As if to confirm this, Ewa rolls up the sleeves of her old-fashioned dress. It is made of plain cotton, purple with a bright floral pattern, and extends over her knees. Did people actually dress the same way in the 16th century? I search the room for more evidence of ancient life. The meat grinder on the sideboard is definitely an artifact from the past. Even the dark wooden table and the stool I’m sitting on could have existed five centuries ago. The cheesy calendar made of glossy paper and the plastic chairs on the head of the table rather less. Yet, the three elderly ladies with bonnets don’t seem to belong on these plastic chairs. There are communities in Paraguay and Bolivia that still live without electricity. Where do Mennonites draw their limits? How do they decide which achievements of modern life to accept? More and more questions are accumulating in my notebook when I was hoping to find answers.

“Schreibt’se dat auf (Is she writing this down)?” Hella asks. Hella is the hostess of the house, and her voluminous forearms identify her as Ewa’s mother. A cotton dress — blue with a dark floral pattern — covers her portly body. Her eyes are dull and seem over-sized by the thick lenses sitting in front of them. Mennonites marry only within their denomination, but, unlike the prejudice, never within the family. However, they often marry within their local community. Due to this “manageable gene pool,” hereditary diseases like poor eyesight and diabetes emerge.

Despite her milky eyes, Hella examines me. It occurs to me that I am at least as strange to her as she is to me. I tap my fingers on an imaginary keyboard as I declare in High German that I am taking notes to write an article. I add that I write on a computer, a machine, and ask if she knows what that is.

“Dat is nothing for me, for Mennonites.”

“Why?” I persist. Inwardly, I jubilate; I’m finally getting closer to the puzzle of their contradictory conventions. In this community, they have agreed to only drive carriages, but you can get a lift in a car. It is forbidden to own a mobile phone, but you can use one. Why is one thing allowed but not the other? “Why?” I ask Hella again, this time with more emphasis.

“I don’t know,” she avoids. I don’t want to give up yet and check if computers are banned. She shrugs her shoulders and stops talking.

The rule of thumb is that whether a technological achievement is accepted is based on how much it benefits the community. Since most Mennonites live on agriculture, tractors are often among the approved exceptions. This community also grows corn and livestock feed. The Mexican state takes advantage of the busy work ethic of the Mennonites, as the taxi driver told me on the way to the community. A special position in the legislation allows them to work the land on a large scale. In return, they may live undisturbed by the outlandish commandments of their faith.

“Son un poco…raro (they are a bit weird),” my driver admitted sheepishly as I listened to his opinion. But the good soul does not seem to like to talk bad about others — not even about Mennonites — a quality I appreciate. I was disappointed when I almost exclusively found reports that show Mennonites as brainwashed, incestuous alcoholics. “They are very, very hardworking. And they make excellent bread,” the driver says.

I can only agree with him. After the sheets are stowed away and the table is free of dough pieces, Hella does not take a second to breathe. Immediately, she starts preparing for lunch. She takes out some jars of pickled meat and an over-sized onion from a chunky wooden cupboard and places everything on the tiled worktop. Then she pulls something out of a drawer, which I cannot see from where I sit. Suddenly, the other women, who had kept to the background, liven up. They cackle with many ohs and ahs, making me curious about this sensational thing. Hella steps aside to grab the onion. All at once I understand every word of the ladies, though they are still speaking in their ancient language. “Ah, and how does that work?” “You just put in a part of the onion here. Then you press that down and – pow – you have dice. Simple!” I cannot believe my eyes. On the brightly polished sideboard in this Mennonite household in Mexico stands a Nicer Dicer Plus, the practical vegetable cutter from the QVC channel.

After a lunch of Mexican tacos, I sincerely thank the lovely ladies for their hospitality. I say goodbye and step out of the shady veranda and into the already sinking sun. My head feels strangely empty and at the same time infinitely heavy. I had hoped to get to know the strange way of life of the Mennonites better. Now more puzzles have piled up in front of me. “A Nicer Dicer Plus,” I mumble, shaking my head as I walk across the dusty dirt road, back to my modern world.

A jack of all trades, Amelie Haupt holds a B.Sc. in Business Psychology and is currently studying Intercultural Studies in Denmark. Working full-time as a writer and editor, she sharpened her language skills and spiced them up with some SEO expertise.