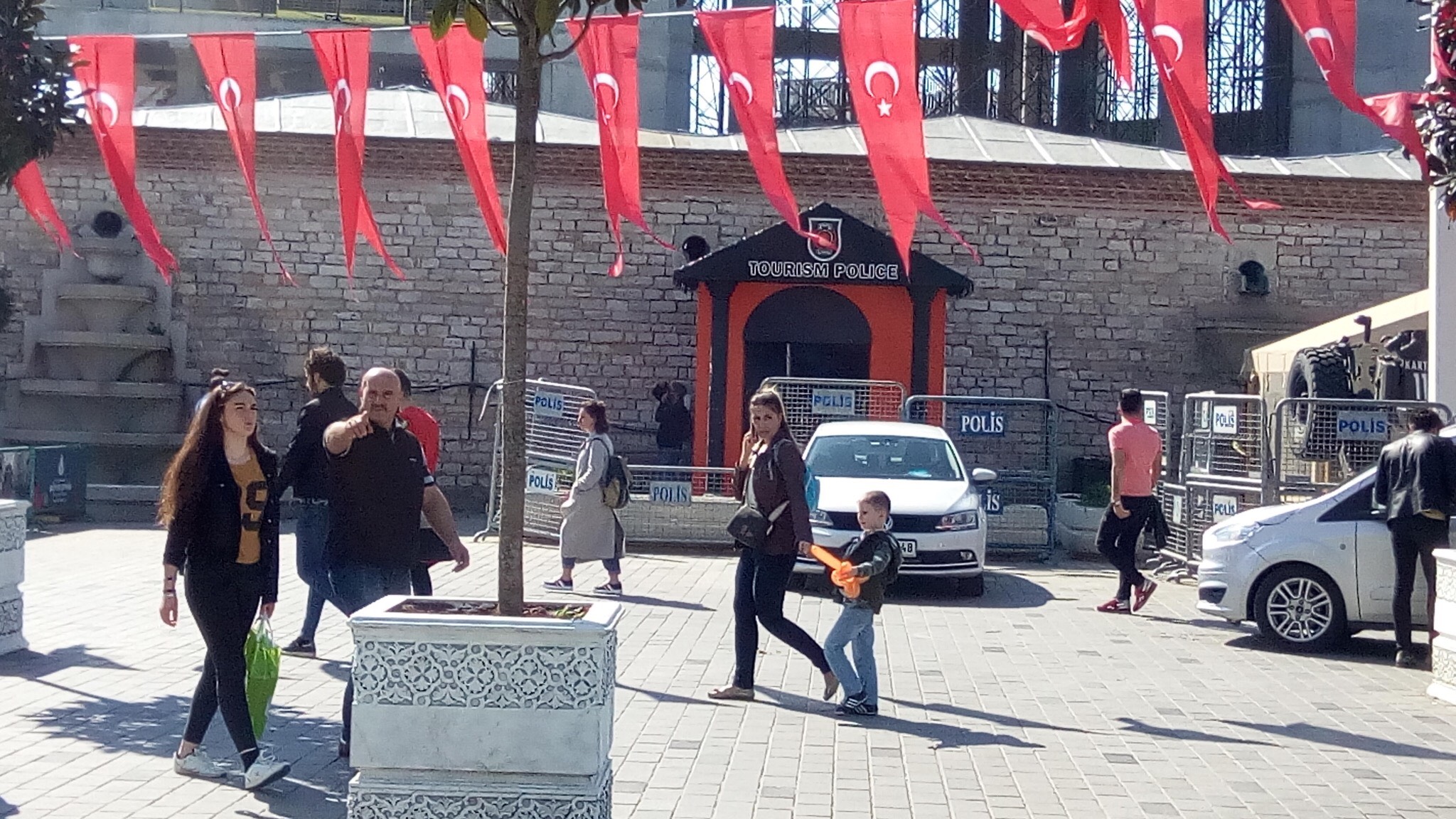 May Day in Istanbul

By Rachel ButtonNovember 15, 2019The Middle East
No Comments

When a popular workers’ holiday in Turkey ignites political tensions, a traveler finds herself evicted from her accommodation and out on the streets amidst tanks, water cannons and police barricades.

It was the night before May Day, April 31st. My friend Cris and I had just returned to our AirBnB after a day of wandering along Istiklal Caddesi, Istanbul’s central shopping street. Our AirBnB was nothing special, just a bare-bones flat with two twin-sized beds and a bathroom. A few days prior, we had bought a hot plate to save money on food. I was about to begin boiling water for pasta when I noticed a notification on my phone.

It was a message from our host, Eren: Police came today, please leave by tomorrow morning.

I froze. Was this some kind of joke? Cris noticed the shift in my face and asked what was wrong. I told her what Eren had said, and we exchanged expletives of panic. We had paid for this apartment for six weeks, and only two weeks had passed. We already booked plane tickets to leave at the end of May. Where were we to go? What on earth had happened?

I called Eren and demanded an explanation. Soon he was at our door, an expression of numb resignation on his face. He told us that Erdogan, Turkey’s current President, was cracking down on AirBnBs. AirBnB was still new in Turkey, and thus a grey area in the legal system (where owners weren’t required to pay certain taxes). One of Eren’s neighbors had suspected that an AirBnB was operating in this building complex and called the police. The neighbor’s reason for animosity was unclear, but either way the police would arrive the next morning to raid the building.

Soon, Cris and I felt more afraid for Eren than we did for ourselves.

“I don’t know what to do,” he said. “I need to pay back all of my guests, everyone who has booked for the next six months. I won’t have any money, and this is my only source of income.”

The door closed quietly, and Cris and I were left alone. We both began packing our bags immediately. Even though Eren assumed that the police wouldn’t arrive until 9:00 AM, we weren’t taking any chances. We needed to find a new room for the night. This proved more difficult than we had assumed. The website Booking.com is illegal in Turkey, and other low-cost websites wouldn’t accept our American credit cards. This aligned with another bit of information Eren had given us: Erdogan doesn’t want anything less than a 3-star hotel in Turkey. He only wants rich foreigners, not budget travelers. Luckily, we were able to call a friend from home who could access all of the internet, not Erdogan’s curation of websites. She found us a place to sleep safely and texted directions. We said goodbye to our soon-to-be-raided home and walked through the night to find our hotel.

After a night’s rest, we awoke to May 1st. We needed to leave and find a new hotel as our friend had only booked us for one night. Without the impending threat of Turkish police, we were able to take more time to find a room online. After using various internet proxy servers to access Booking.com and other budget tourism sites, we found a nice room just a mile or so north of our current location. We packed our bags and headed down to the lobby. I asked the concierge if we could call a taxi to our new hotel. She looked at me with concern. She then requested help from three other concierges and spoke with two different taxi companies before informing me that this was impossible.

The concierge elaborated, explaining that the government had shut down all major streets in central Istanbul, specifically in the areas surrounding Taksim Square. Essentially, there were no cars, no taxis, no nothing moving through the streets of Istanbul. We would have to walk.

At that point, I was only vaguely aware of May Day in Turkey. I knew that it was a workers’ holiday, and that people traditionally gathered for demonstrations and organized protests. I also knew that in recent years, May Day was a point of contention between civilians and the Turkish government. In 2017, there were clashes with police…tear gas, incarceration, and water cannons. I don’t know why, but I dumbly assumed that if we avoided Taksim Square, the exact location of turmoil, we wouldn’t be affected by May Day. Perhaps I was a little naive, or perhaps it’s impossible to be prepared for certain things. Either way, when Cris and I stepped outside to find our new hotel, I was stunned.

Usually, Istanbul is an overstimulating convergence of narratives: moms walking with strollers, men pacing outside of their mini-marts, and college students lounging in alleyways. On May Day, all of this died. The streets were vacant. Every single store we passed was closed. There was a silence so unmistakably heavy it felt as though the city had been evacuated overnight. In fact, the only signs of life were the police officers.

The officers walked in small cliques of two or three, decked out in full riot gear. There was something about these officers that I found utterly revolting: they seemed happy. While Cris and I felt as though someone had died, these chumps swirled their batons and laughed with one another. It seemed so strangely inappropriate, like blasting a stereo through a cemetery.

The officers increased in concentration as we approached Istiklal Caddesi. Istiklal itself was covered in massive, silver barricades. We had to navigate along the perimeter of Istiklal for a while in order to find a checkpoint. We stood behind a handful of other stray civilians, waiting for an armed guard to allow passage. As we stood, I strained my neck to catch glimpses of the mystery behind the barricades. Just one day before, Cris and I walked freely through Istiklal. Now, I had to sneak glances. Eventually, my eyes found a decent gap through which I could see a series of tanks, armored vehicles, and water cannons. I couldn’t count how many there were.

These vehicles lay like inert, greedy monsters, swallowing my memories of the people who had strolled there just yesterday. Until that moment, I never knew I could feel such camaraderie for people whose faces I couldn’t even remember, people who otherwise only served as a background in my day’s events. However, looking at the armored vehicles through the barricade, I felt a collective betrayal on behalf of myself, Cris, and everyone else who had ever felt what its like to walk along Istiklal Caddesi. How dare they squash something so alive, even if only for a day.

After a few minutes, it was our turn at the checkpoint. Cris and I showed our passports to the guard, and we were ushered through another series of barricades across a narrow slice of Istiklal. Once we had crossed, we maneuvered through two or three silent blocks before finding our new hotel. Safely inside, Cris and I tossed our luggage onto the floor and looked at one another like war veterans. No, nothing had really happened, but this almost made the experience more disturbing. The heavy silence, the closed stores, the barricades…all of this was merely to prevent some people from gathering with picket signs in Taksim Square. We had witnessed the full extent of Erdogan’s hand, and it was powerful. He could kick us out of our AirBnB, even if it wasn’t necessarily illegal. He could shut down thousands of businesses for a day. He could block all traffic. He could assemble a wall of tanks and water cannons, even if there was no crime against which to retaliate. He could silence all voices, save for the laughs of his soldiers.

Nothing had really happened, and Istanbul was back to normal the next day. However, when I look back on May Day, I see all of the times when something could have happened. The police, armored vehicles, cannons, and barricades were poised, waiting for the mere suggestion of insult. They were all waiting, eager to assign blame and make an example out of someone. Sometimes the threat of danger is more haunting than an actual injury, like the feeling of panic you get when you almost fall on a patch of ice. That’s the feeling I get when I think about Istanbul: a pinch in my gut and shock over what could have been.

Rachel is an artist and freelance writer, and she has been living on the road since 2017. You can read more of her thoughts on hippospit.com.