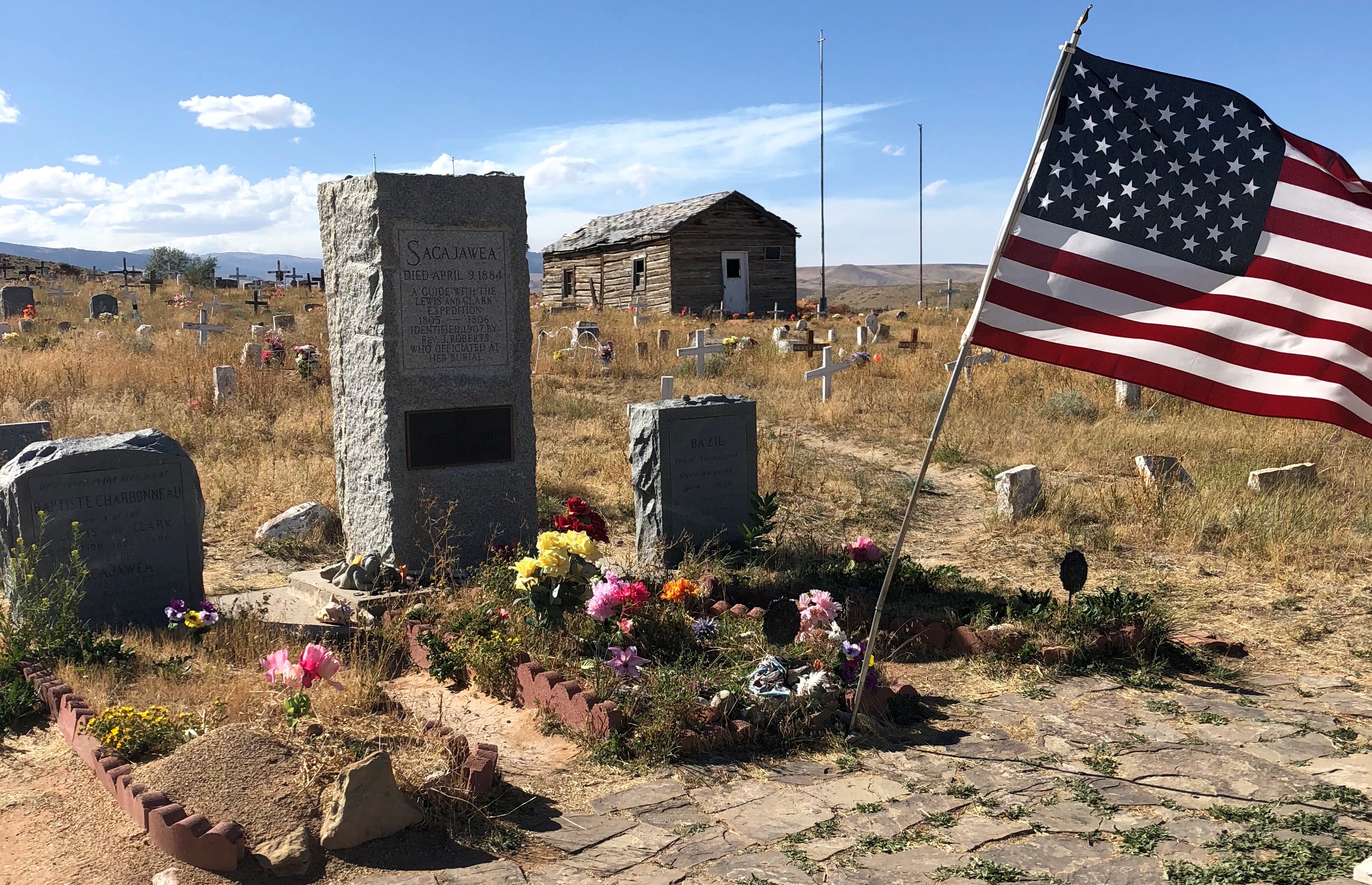 When a writer visits the tomb of the legendary Native American linguist, guide, mother and adventurer, she is intrigued by the unexpected objects left as offerings to her.

The Wind River reservation in Wyoming is a sea of dust in September, a bi-colored palette of sere gray moonscape and cobalt blue houses.

My husband and I were driving through the reservation on the way to the middle-class tourist stops of Grand Teton National Park and Yellowstone when I saw a dot on the map that indicated the “Grave of Sacajawea.” I asked for a detour.

In Missouri, in the fourth grade, every public school child has to complete a project on a “famous Missourian.” Our daughter had chosen Sacajawea—who may or may not have been born in Missouri, but who Missouri claims as its own.

This is odd, given that, having claimed her, we rarely give her any credit, a fact that fills my daughter with righteous feminist rage.

There is a statue of Lewis and Clark (and their dog) at the state capitol in Jefferson City, but Sacajawea, who at the age of 16 guided them, spoke to the tribes they encountered, and did the whole trip with a baby strapped to her back, is conspicuously absent.

I was ashamed that I knew less than my daughter about Sacajawea—Native American linguist, guide, mother and adventurer—but I did know enough to want to pay my respects to her at her grave in Wyoming.

My husband and I began the search for her tomb. As he drove, I navigated and did some research. Her tomb, and a statue commemorating her legacy, the internet told me, are located in an active Shoshone Cemetery on the reservation. Several bloggers had posted cautions about showing proper respect for the holy site and warned with equal alarm of the preponderance of rattlesnakes on the cemetery grounds.

The first gave me pause. Would it be wrong to visit? Was I, a privileged white woman, an unwelcome intruder in this sacred space? Was this a bad idea?

To my embarrassment, I knew little about the Shoshone as a tribe, or the Wind River Reservation in particular.  My small store of information was limited to feelings of disgust and dismay for the Native Americans’ foul treatment at the hands of our European ancestors.

The town where I teach is located along the Trail of Tears, the historical path of the death march that President Andrew Jackson forced on the Cherokee through Missouri and into Oklahoma. This means that I’m constantly reminded of our historical crimes, and also that I have encountered very few Native peoples in my life.

As my husband and I wound through the reservation, famous for its levels of crime and poverty, I was reminded of how little I really knew. Why, for example, were so many of the houses blue?  How did these people earn a living? How cold did it really get here in the winter?

Most importantly, what did the modern Shoshone think of Sacajawea? Did they view her as a traitor (as the Mexicans tend to see La Malinche), or was she to be admired for her strength and intelligence?

I was hoping to pay my respects to a woman who my daughter and I viewed as courageous and skilled. I wanted to recognize her (often ignored) contributions to U.S. history. But what did I know about Shoshone history and reality? Very little. I feared that this made me an intruder, an inappropriate glommer-on.

There was no signage to lead us to Sacajawea’s grave. There was no gift shop or tour guide. A small brown sign indicating the way to the “Cemetery” was the only marking we saw.

The cemetery itself blanketed a small hill, framed by the Wind River mountains behind and dry fields of gray dust on either side. The wind whipped fiercely around the gravestones, kicking up small tornados. The sky was a brilliant blue that matched so many of the houses that we had passed.

The cemetery was tidily kept, each grave covered in small offerings: glass beads, silk flowers, vases and photos. Graves were marked by iron bed headboards and footboards, representations of the eternal rest of beloved family members. I snuck a surreptitious photo.

We arrived at Sacajawea’s grave. She is buried next to her sons, the baby she carried on the Lewis and Clark expedition and the Shoshone child that she adopted later. These graves were no less well cared for than any other.

A smart, crisp American flag was planted in front of Sacajawea’s tomb, standing straight and proud in the unrelenting gale coming off the mountains. I wondered how often this flag must be replaced to be so pristine in the face of such devastating winds.

To the north was a life-size bronze statue of Sacajawea, barefoot, holding a sand dollar—a symbol of her successful leadership of the expedition to the Pacific Ocean. Gifts of necklaces, bracelets and silk flower leis almost obscured her hand.

At her feet, even more offerings. Paintings, hand-knitted scarves, coins, beaded jewelry, seashells and military paracord lay on the pedestal.  In and among them were an action figure of Elastigirl and a carefully posed, pristine Elsa doll from Frozen.

I was moved by these offerings.

These were two powerful female characters—a superhero and a powerful witch.

In a place so well known for poverty, how precious might these dolls have been? How important is Sacajawea that they were left for her?

These questions added to the mystery I felt. We don’t really know when she was born. We are unclear on when and where she died. No likenesses of her have survived, and we have nothing left that she owned. We probably aren’t even pronouncing her name correctly.

Many, like me, have a vague sense of respect for Sacajawea, the Shoshone Indian guide who traveled with Lewis and Clarke from St. Louis, Missouri to the Pacific Ocean. The reality is, however, that vagueness is the defining characteristic of our knowledge of this woman.

I still didn’t know the answers to many of my questions, and I left resolved to learn more about the Shoshone. I also left feeling that I had visited the grave of a woman who continues to serve as a symbol of strength and intelligence, a symbol of skill and perseverance—not only to my own child, but to the children of a tribe proud to number her among their heroes.

Elizabeth Gackstetter Nichols is a writer, researcher and college professor at Drury University. The author of various books, articles and essays on Latin American and U.S. popular culture, she writes about women’s artistic production, beauty practices, gender norms, and cosplay. You can find her at www.cosplaymom.com.