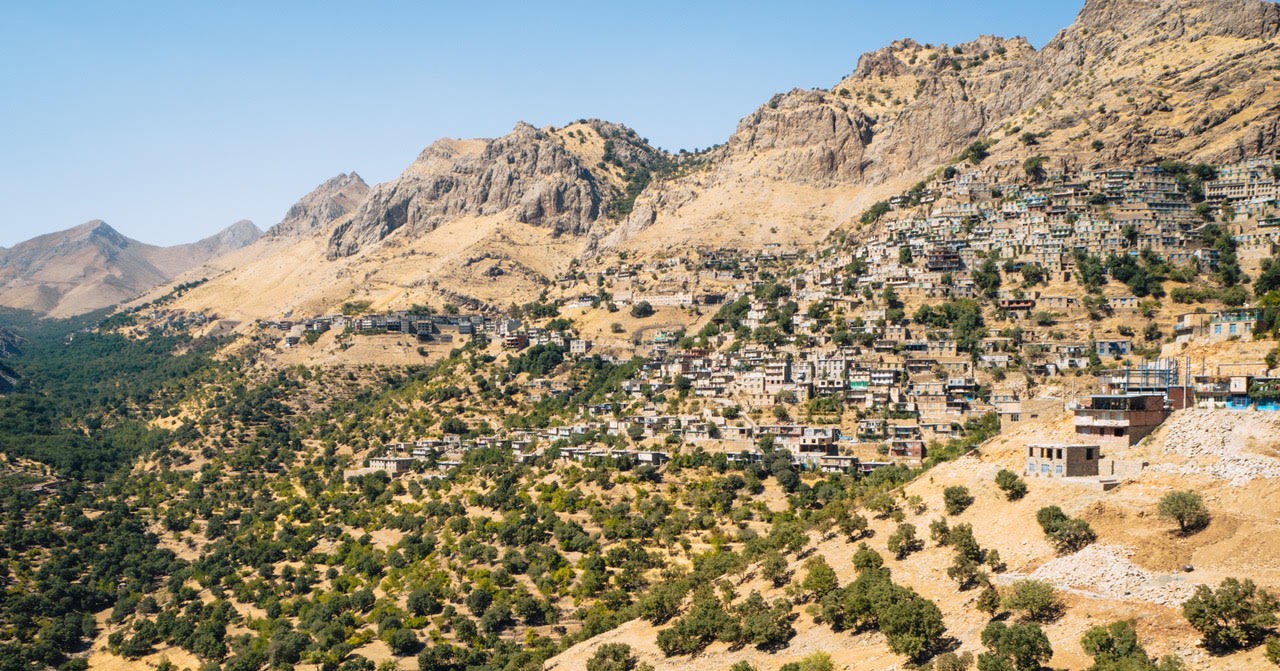 By Elisha DonkinApril 6, 2020The Middle East
No Comments

After traveling in Iran for a month, a writer visits the province of Kurdistan and finds herself in a whole new world.

We stopped for a beautiful view of the mountainous region close to the Iran-Iraq border to find other cars already parked there. The loud sound of Kurdish music was blasting from open doors as families danced arm-in-arm in a joyous display. “Dancing is always a good idea. For Kurdish people, life without music is torture,” our guide informed us.

After a month traveling in Iran, it was a spectacle I certainly hadn’t seen for a while. Singing and dancing in a public space was not something people did, and for women in particular, it was not allowed. But I was in Kurdistan, and I soon discovered that things were quite different here.

I had decided to spend the remainder of my time on my Iranian visa in the Kurdistan province, on the border with Iraq. I had been curious about the Kurdish people, the largest ethnic group in the world without their own nation, so I opted to try and understand a different part of the complex cultural and ethnic landscape of the Middle East.

I found myself based in Marivan, a Kurdish town on the edge of Zrebar Lake and not far from the Iraqi border. From there, I headed out on a day tour to Hawraman Valley with Mokhtar, a local guide and driver. He managed a local hiking group and began to guide foreigners on day trips as more tourists slowly started to discover places outside of the well-traversed Iranian circuit of Tehran, Esfahan, Shiraz and Yazd.

We left the dancing Kurdish family behind and continued on to the crest of the valley where we stopped again for another viewpoint. This time, the dry, golden-hued plains stretched into what is known as Iraqi Kurdistan across the border. I noticed small specks navigating the rocky slopes like ants, but when I pointed them out to Mokhtar, he simply said, “They are kolbars – porters.”

Looking more closely, I could make out men climbing towards us with heavy loads on their back, appearing as though they were on a mountain climbing expedition. Instead, they were locally known as kolbars, who brought goods across the border from Iraq to Iran.

“But not smugglers like bad people; they don’t smuggle drugs or gemstones or anything like that. Maybe the worst is cigarettes and alcohol,” Mokhtar explained. I knew the latter to be illegal in Iran. Although the term smuggler has negative connotations, Mokhtar made sure we understood that this was just an informal economy operating out of necessity, caused mainly by crippling sanctions placed on Iran by foreign powers that had severely affected local living standards with prices rising astronomically and employment opportunities as scarce as finding fertile land in Iran’s vast deserts. These men were simply trying to make a decent income and provide people with goods that they could no longer easily obtain on the regular market.

Aside from the obvious danger of trekking over such terrain with up to 30 kilograms on their backs, Mokhtar said that there was also the risk of being shot at or arrested by authorities on either side of the border. Despite them usually turning a blind eye to the informal trade, authorities had been known to occasionally change their mind, especially with pressure filtering down from the top.

Despite my fascination with this unofficial trading system operating across the Kurdish areas in Iran and Iraq, we moved on and continued our drive onto the day’s main attraction: Hawraman Valley. The valley is a spectacular gorge rimmed by rugged mountains in the far east of the country, which has protected its Kurdish inhabitants from outside attacks for centuries. It is sparsely populated, with small villages dotting the slopes, and the main town in the centre is simply known as Hawraman Village.

The village is a stepped settlement, where the houses are built so steeply on the side of the mountain that one family’s roof meets another family’s courtyard. This kind of village architecture can be found in many places across northern Iran. There are some famous stacked villages like Masuleh in Gilan province, which draws crowds of day trippers hoping to get their postcard-worthy photo. Hawraman, on the other hand, is much quieter, and we only met a couple of other tourists the entire day, Iranians from Tehran rather than foreigners.

Mokhtar took us up through the skinny passageways between the houses of Hawraman Village. At first, it felt like an intrusion to pass through people’s doorways and walk through their courtyards. However, we also passed young local boys on their way to Koran class and women who were congregated outside a small shop that operated from someone’s home. I soon realized that this was just life in a stepped village.

Where homes in Australia are quick to build fences and higher walls to shield themselves from their neighbours, this community seemed able to live literally on top of each other. Children played in the connecting alleyways, chasing each other from house to house, and women sat in their courtyards, which were really their lower neighbours’ rooves, peering over the edge for a chat with the women below. I couldn’t help but think that in our tendency to build walls and fences to divide our properties at home, we may have lost this sense of community.

We stopped by one man’s home, where he was in his small workshop carving combs out of wood. He was happy to show us how he worked while we watched, and he told us that, although he was getting old, it was the only way he could make some money to survive. Just as we were going to leave, I asked to take his photo, and Mokhtar translated the man’s humble response: “But why would you want a photo of me? I am not special or anyone famous.”

We passed other older men in the village, often sitting together and seemingly in deep discussion. I couldn’t help but wonder what their aged eyes had seen. They lived in a valley along the borderline of two countries who had fought a devastating war against each other just three decades ago. Before that, their people had faced attempted ethnic cleansing and were left scattered across four countries after all the drawing of borders by colonial powers had left them without their own nation, Kurdistan. Although the high mountains surrounding them had afforded them some protection, the difficulties of the past century would have been impossible to avoid.

We climbed higher into the village to where the mosque was situated and entered, careful not to interrupt the Koran class in progress. A couple of cheeky boys came running through the door, obviously running late and dripping wet from rushing through the cleansing process that one does before entering a mosque. They had wide smiles on their faces and waved at us as they entered their classroom.

From there, we could see the mountains on the other side of the valley, golden in their bareness after a long, hot summer. The sun was beginning its descent below the horizon, and the sky turned into a pinkish blue haze as the air grew cooler. It was our cue to make our way back through the winding alleyways and down to the main road where Mokhtar had left his car.

A lady waved us off as we drove away, and Mokhtar said, “She always asks me, ‘Why do you always bring your friends here?’ and I try to explain to her that they’re actually tourists, but she thinks I’m just very popular.” It was clear that the concept of tourism was still in its infancy outside of the popular cities in Iran, and especially in Kurdistan, where I found people were very curious as to why I had decided to go there at all.

As we drove back in the dark over the ridge where the kolbars had carried their goods and past the spot where the Kurdish family had been dancing, I thanked my decision to spend my last week in Iran in its Kurdistan province.

Elisha Donkin is an Australian freelance writer and photographer, having written for Lonely Planet, Remote Lands, Matador Network and Travel Play Live magazine. You’ll usually find her in off-beat places, wherever there are mountains and always with a camera in hand. She also documents her journey on her blog, Going Somewhere.