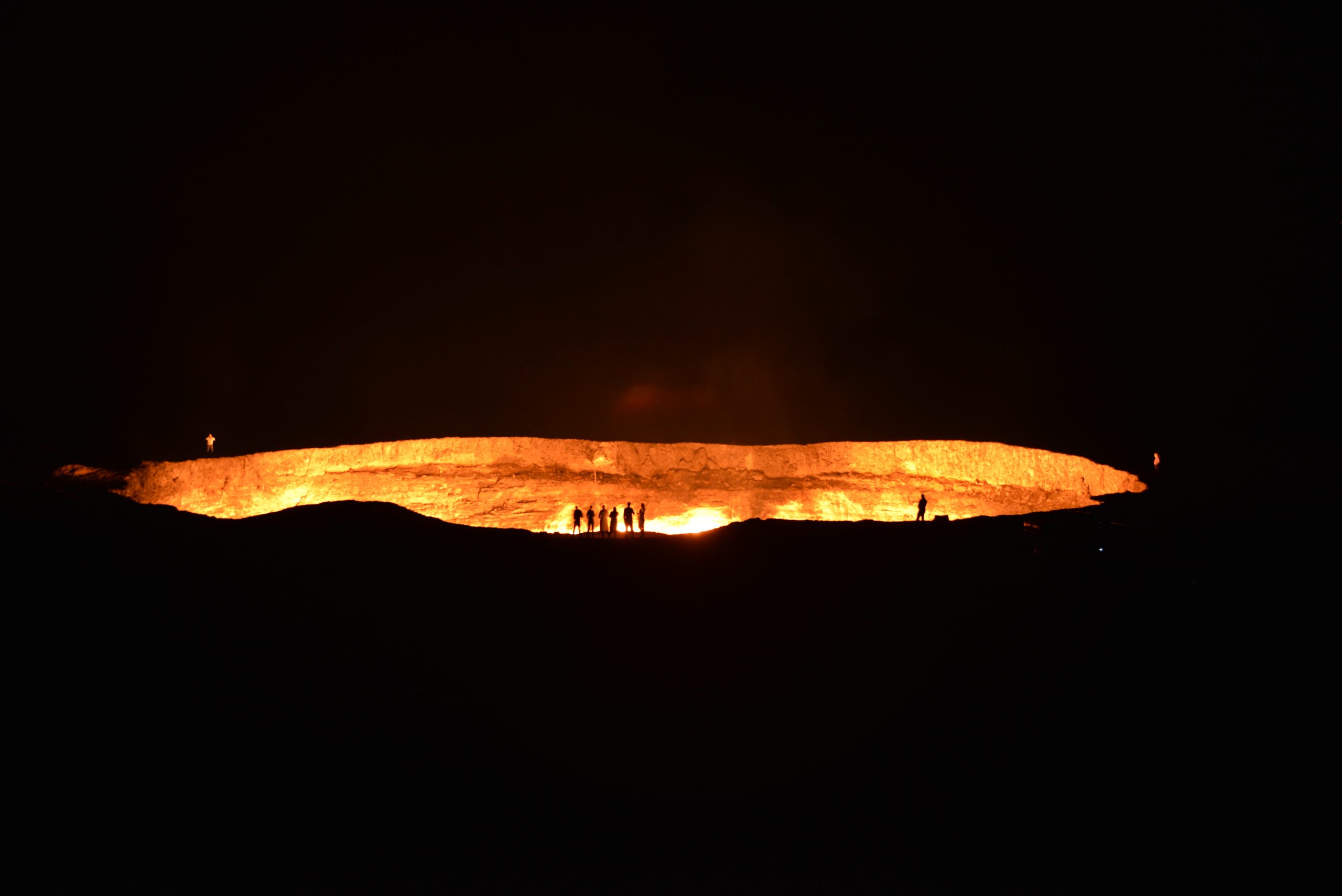 The Gates of Hell

In the desert of one of most politically repressive countries in the world, a traveler gazes upon a famous, undying fire that has burned against all odds for nearly 50 years.

I bet Vladimir lit up a cigarette too close to a leaky pipe, one fateful night in 1971, and it all went boom. We’ll never know, as the Turkmen and Soviet archives are inconsistent and unclear about what actually happened. We know the Russians were looking for oil in the Karakum desert, now Turkmenistan, and found lots of gas. We know the rig collapsed into a crater about 70m in diameter and 30m deep. We know they expected it to stop burning within weeks, and it’s still burning.

I went to Turkmenistan to visit the Gates of Hell. I was fascinated by the thought of spending the night barbecuing mutton and drinking vodka next to a burning crater in the middle of a desert in Central Asia.

Turkmenistan is the second most repressive dictatorship in the world, after North Korea, and one of the world’s least visited countries. It is also immensely wealthy, thanks to its vast gas deposits. Getting into the country and making sure I didn’t get into trouble had been an adventure in itself, but now the real adventure was beginning. We were leaving the wide streets and grand monuments of Ashgabat, heading into the wild.

I left the Ashgabat hotel with my guide, Yusup, on a warm October afternoon under clear blue skies. Yusup looked more like a friendly, yet strangely scary, grandpa than a guide — a grandpa who’s had a rough life and who is now content with his wisdom and with the memories of his many adventures. He, the driver, and I set out in an old black Daewoo with its red leather interior.

As we left the city, we stopped to buy vodka and cigarettes. The tour company was providing food, water, camping equipment, guides and transportation, but no booze. I had quit smoking eighteen months prior but was intending to make an exception because you’ve got to smoke and drink as you are beholding the Gates of Hell. I bought a pack of Russian cigarettes for $20 and a 75cl bottle of Turkmen vodka for $1. The local dictator is far keener to stop people smoking than drinking.

We drove for a couple of hours before stopping for a break. The majestic boulevard soon became a roughly paved, empty road, still inexplicably wide, cutting through a sea of nothing. Sections of curvy, cream dunes were separated by longer, utterly flat sections dotted with barren shrubs.

We drove past camels in the golden sunset and the odd car coming the other way. We stopped at a village: a cluster of a dozen white, single-story buildings with bright green metal roofs. No roads in the settlement were paved; fine dust was everywhere. The odd yurt. Fences made of the most gnarled, driest branches I’d ever seen, heaped together to form walls behind which camels or chickens were kept. It was as if an enchanted forest had been turned into a wasteland by a spell, the remnants of its trees cast on top of one another to form barriers, to protect what life was left.

Preparations were ongoing for wedding celebrations in the village. Bright yellow drapes; giant red ribbons; red tablecloths made of synthetic fibres, adorning white plastic chairs and tables on the dusty ground, next to the wreck of a green soviet truck. Car parts in heaps at the end of an alley. The women, tall and strong in their elaborate, bright traditional dresses, directing the proceedings. Children in suits running havoc. I couldn’t see where the men were.

Just after sunset we stopped, switched to an SUV, turned away from the main road and onto a gravel track. We drove for another thirty minutes in a desolate, flat landscape of compact sand. The temperature plummeted as the sun went down, to less than 10C. The driver dropped me and Yusup off, and we walked the last few hundred metres. The smell of methane was dizzying. It was as if someone had left the gas on with no flame for hours. It was now dark.

The bright, orange glow in the desert night was drawing us ever closer. It was only a sliver of gold on the horizon at first, as if the curtain of complete blackness in front of us had been poked with a knife, a horizontal slash with a giant blade to reveal the nuclear glow on the surface of a star. As we got closer and closer, the sliver became an ever growing oval of reddish light, filling our field of view. We could see the tiny silhouettes of other humans on the edge of the crater, little black shadows against the crisp, golden oval becoming bigger and bigger, wider and wider.

We were downwind, and as we approached, the temperature got almost unbearably hot. The powerful convection currents generated by the giant burning void in front of us caused a strong wind of methane and turbulent air. You could see the vortexes in the orange glow.

We made it to the rim. I could now see the circular shape of the crater, about the size of a football field. Maybe twenty other tourists had converged there at the same time, their bodies and faces now clearly visible in the golden light. Below the rim, a circular precipice of compact ground topped a giant bowl of gravel. In it, the ground was burning. The stones and the sand were on fire: hundreds of fires, so hot their flames were almost white, some as small as a campfire, many a large as a car. The temperature inside the crater is over 1,000C.

That was when I heard the noise. It was not the wind — well, not just the wind. It was the sound made by the burning gas, like the hum of a V12 at minimum RPM, mixed with the hissing of a million snakes in unison.

An hour later, we had dinner of mutton and roast vegetables, cooked on an open fire at the camp about a quarter mile from the crater. The sky was a black cloak dotted with a million stars; the meat was juicy; the cheap vodka warmed our weary bodies. We talked with the other tourists about how we’d ended up there, in the middle of nowhere, in one of the least visited and most challenging countries in the world.

Before going to my tent to sleep, I set out towards the crater, alone. Yusup ran after me as he was not allowed to let me go alone. The temperature was just above freezing. The ground was flat, but we had to proceed with flashlights as we couldn’t actually see it.

We got to the rim again. The methane wind was scorching us. The hissing from the thousand fires was a low frequency hum going straight from our ears to our guts. The glow was calling us, and it was impossible not to stare at it: a fiery chasm in the Earth, like a window into the darkest corners of the soul. Rage and death. The yellow light was enveloping everything, which made the blackness around us a thousand times blacker. We could see nothing but the Gates to Hell. I took the vodka out of my backpack. Yusup and I drank from the bottle, staring into the fire, in silence.

Edo was born in Milan, Italy, and grew up between Italy and the South of France. He lived most of his adult life in London, England, and currently splits his time between the UK and his primary base in Salem, Massachusetts. A citizen of the world, he has visited around 60 countries and 36 US states. He has held a variety of global roles in large multinationals and done business in over 20 countries. Passionate about photography and good food, he explores whenever his day job allows.