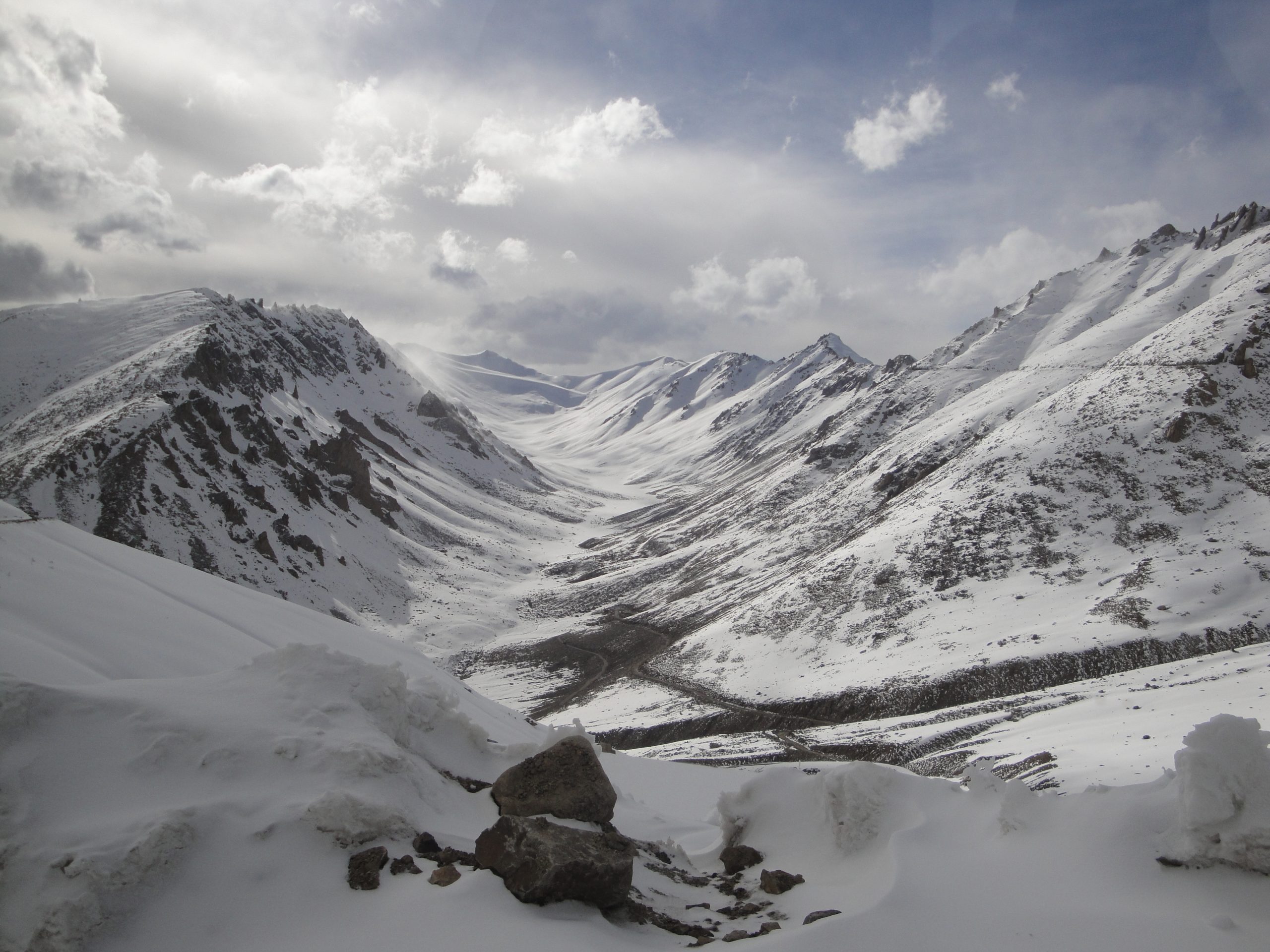 Dangerous weather on India’s highest plateau forces a traveler to choose between safety and adventure.

I gave up telling people my plans to go to Ladakh because the responses were hardly encouraging.

“Why Ladakh, of all the places in Jammu and Kashmir? You will get shot by the militants!”

“People die there because they don’t have enough oxygen.”

“Are you becoming a Buddhist monk?”

Most of those who visited Ladakh were Himalayan trekkers, Buddhist devotees who came to the monasteries or the families of army personnel posted there. Today it is one of India’s most sought-after tourist destinations.

Ensconced in the Upper Indus Valley of Jammu and Kashmir, straddling the Upper Himalayas and the Karakoram Range, much of Ladakh’s territory lies above 9900 feet, making it India’s highest plateau. Ladakh itself means “The Land (Dakh) of High Passes (La).” It was ruled by Tibetan Namgyals until 1834, when a Kashmiri Dogra king annexed it and made it a part of Jammu and Kashmir. Subsequently, it became a part of India when the Maharaja of Kashmir signed the Instrument of Accession in 1947. Today, it is India’s newest Union Territory. With Xinjiang (in Northwest China) to its far north, Jammu and Kashmir to its West, and Tibet to its East, Ladakh is a sensitive area, subject to frequent incursions from China and Pakistan, so the Indian Army is ubiquitous here.

I fly into Ladakh from New Delhi, across the magnificent Himalayas, to land at the 10,692 feet-high Kushok Bakula Rinpoche airport in Leh. The airport is not only one of the world’s highest civilian airports but also one of the most dangerous because of the powerful and unpredictable mountain winds that become perilous after noon. Flights to and from Ladakh operate only in the morning. I step out of the aircraft to a gust of wind that whooshes straight into my ears and up my nose as I scurry into an airport lobby teeming with army personnel.

A floor-to-ceiling board advises tourists to acclimatize by remaining hydrated and inactive for the first 24 hours.

“Madam, last week one disobedient teenager jumped around excitedly here in the airport. She died,” says a woman army officer as she frisks me.

Acclimatization is crucial here. Ladakh lies in the rain-shadow region of the Himalayas. It sits above the tree line and therefore has sparse greenery. This, coupled with thin air because of the high altitude, results in an oxygen-deficient atmosphere, which can cause varying degrees of Altitude Mountain Sickness (AMS) with symptoms such as headache, nausea, dizziness, and fatigue. Failure to acclimatize could lead to HAPE (High Altitude Pulmonary Oedema) and HACE (High Altitude Cerebral Oedema), both of which can be fatal. I step out of the airport a little scared, but to a vista that leaves me open mouthed — an utterly close, deep blue sky that seems to lift the mountains encircling the airport. I want to reach up and swipe a bit of blue but close my mouth at the sight of a grinning face holding up a placard bearing my name.

“Jhulay,” he says. He is Karma, my Tibetan guide and the driver who may have been grinning more at the unedifying sight of my open mouth than in greeting.

“It means ‘welcome’ in Ladakhi,” he clarifies as I bend to haul my bag into his SUV.

“Oh, do not exert!” he admonishes.

“I will lift. We go now to hotel and you rest!”

The hotel is a pleasant surprise because it is the only one with an oxygen room! At the front office, Lobsang welcomes me with kahwa, an amber coloured, steaming herbal concoction. “It helps you to acclimatize madam. Please rest today in your room.”

Now, I am scared and sleepy. I crash within minutes. During intermittent bouts of wakefulness that are defined by a crushing lethargy and a sharp headache, I wonder if I have been reckless. I have neither the appetite nor the energy to have lunch, but somehow I force myself to drink water at regular intervals. Twenty-four hours later, I am fine, fully acclimatized and raring to go.

“Spend a day exploring Leh before climbing higher,” says the doctor at the hotel.

I start with the War Museum. Established by the Indian Army, the War Museum poignantly chronicles the valour of the Indian soldier — the scrawl of a six-year-old to her father who went down fighting, a letter from a father to his son telling him how proud he was, which reached him only after the son had died in battle. The walls carry stories of the spirit and courage of the Indian soldier and inspirational quotes, while exhibits simulate war strategies. My next stop is the Shanti Stupa at 13,999 feet. This white dome mounted on a rectangular base, built by a Japanese Buddhist monk and consecrated by the Dalai Lama himself, contains the relics of the Buddha. Karma then takes me to the nine-story Leh Palace. Perched precariously on the Tsemo Mountain, the Palace, now in ruins, reflects the simple life of Ladakhi royalty. I round off my day with the Palace Museum, and adjoining it is a treasure trove of 450-year-old Tanghka paintings, Ladakhi jewellery and Tibetan handlooms and handicraft.

“Let us go to the monasteries now, Karma,” I say.

Monasteries are the axis of Ladakhi life. Families make offerings of produce from their land and even their sons as a thanksgiving to the monasteries. They then consult the monks on all vital issues. We start with the Hemis monastery, the oldest and wealthiest, and follow it with those at Lamayuru, Thiksey, and Alchi. Each of them resembles the other, all done up in startling reds, vivid greens, bold blues and bright yellows, perhaps as a sub-conscious response to the colourless surroundings. The walls are painted with murals of Gods and demons with exaggerated features, and ceremonial drapes adorn the altar while awnings and flags flap in the strong winds. Monks chant in a low monotone while little maroon-robed boys play boisterous games between classes without disturbing the serenity. As I visit the monasteries, I settle into a deep calm.

I am now ready for the Khardung La Pass — supposedly the highest motorable road in the world at 18,360 feet. We leave Leh in the early hours of a grey, windy morning with two small oxygen canisters, water, and dry fruit, just in case we are stuck on the Pass because of heavy snowfall. As the road climbs from 11,200 feet, the brown mountains with blue, mauve, and grey chips of stone give way to huge glaciers that look like mounds of soft vanilla ice cream. There is not even a bird sound, and the hush is surreal. Vehicles move in a convoy on a narrow strip of a road slippery with ice and dented with potholes.

“Do not stay out beyond three to four minutes, and please do not jump or run,” Karma warns me as he inches the vehicle up to the top of the Pass. At 18,360 feet, AMS can strike swift and hard.

I step out to what is the closest I can get to being on top of the world. There is blinding snow all around and a high-decibel, howling wind that threatens to blow me off. Yet all I am aware of is a deafening, desolate silence and the stoic soldiers of the Indian Army, who, for months together, brave the avalanches, icy winds, subsistence conditions and the utter isolation at the high altitude army base here. They watch me closely, and within a few seconds of my stepping out, ask me to get back into the car and call out to Karma.

“We cannot cross the pass to Nubra,” says Karma. “They say that there has been fresh snowfall and the vehicles that went yesterday have been stuck all night on the pass. So we must turn back.”

Across the Khardungla Pass lies the Nubra valley, where the Nubra River and the green walnut, apricot, and almond trees present a startling contrast to the stark, almost dichromatic beauty of Ladakh. We were supposed to spend the night in a tent under a huge full moon, ride the Bactrian camels found only in the higher regions of Mongolia, China, and Kashmir and visit the hot sulphur springs at Panamik, the last inhabited village on the way to the Siachen Glacier, the world’s highest battlefield. I send up a prayer for the tourists stuck all night at 16,000 feet. We return to Leh. Karma insists that I see the Magnetic Hill, an upward slope on a seemingly endless road which vehicles “climb” with the ignition switched off. He gives me exotic explanations, and I let him think I believe him, knowing all the while that the effect is because of an optical illusion.

“Tomorrow, you will enjoy Pangong Tso (Lake). The water in the lake changes colours many times, even during a single day. 60% of the lake lies in Chinese territory while 40% lies in India,” Karma says, trying to cheer me up.

But Pangong Tso eludes me just like Nubra and the Bactrian camels did.

It is not the clearest of mornings when we start the five-hour drive to Pangong Lake via the 17,600 feet high Chang La Pass. The road seems like it is almost chiselled out of the sheer side of the mountains. Khardung La seems much safer. Halfway through, the snow comes down in thick swirls. The defence personnel at the army outpost at 15,000 feet advise the drivers to put chains around their tyres to prevent skidding on the hard ice and move in convoy. It’s all scary but exciting. The drivers weave the chains around the tires carefully, and the convoy moves. Every gradient is a blind turn tinged with the frightening prospect of a fatal tumble, but every driver is negotiating it expertly. At the penultimate bend, Karma stops.

“The snow is not looking good. It seems dangerous. We can cross the pass and reach the lake, but it may not be possible to return today, and you are flying out tomorrow,” said Karma.

I remember the army personnel saying, “Take care. Turn back if the snow is thick.”

I am disappointed. There is just one more bend, and we are already at 17,000 feet.

“What do you suggest?” I asked Karma.

“Not good. We go back,” he says and reverses the vehicle.

It is the scariest moment of my life. We are at 17,600 feet, there is near-zero visibility on a road no wider than three or four feet, and Karma is reversing. The next thing I remember is Karma saying, “Madam, we have reached the hotel!” I pour myself out of the car, crawl up to the room, and teach myself to breathe normally. Later that evening, we get the distressing news that a tourist in the convoy got down to photograph the last bend, stepped back into what he thought was firm ground, and fell into a seemingly bottomless pile of snow. The army was still looking for his body, but incessant snowfall was hampering their search operations.

“Thank you for turning back Karma,” I tell him on my way to the airport.

“You must come back,” he replies.

But as I board the plane, I realize that I don’t want to leave Ladakh at all.

Bhagyalakshmi Krishnamurthy has dabbled in various genres of writing over two decades, but nothing gives her greater pleasure than packing her bags, hitting the road with her family, and then sharing her experiences on www.ofplacesandpeople.com. Always ready with the next trip, she remains, at heart, a nomadic chronicler.