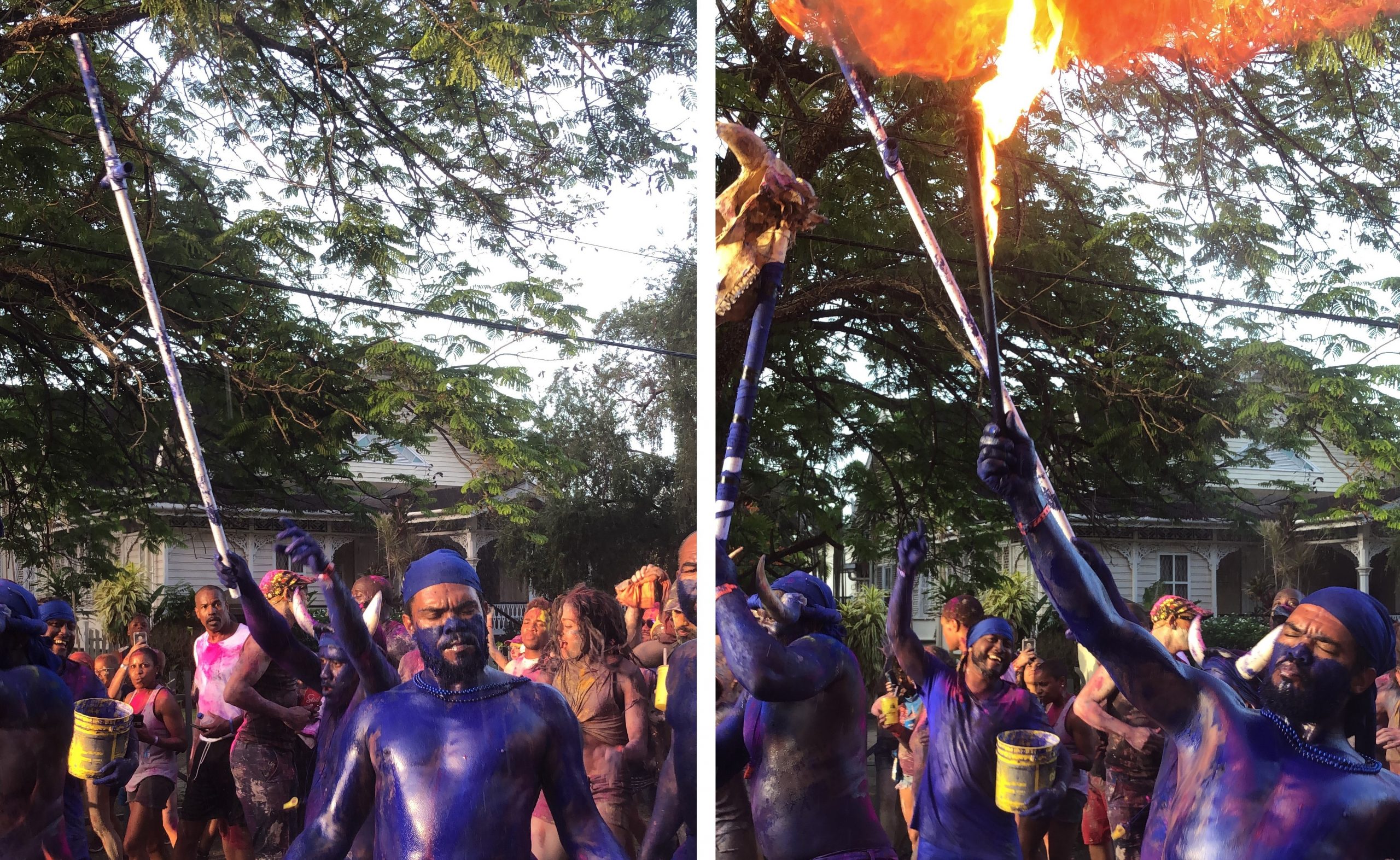 Trinidad and Tobago’s annual J’ouvert festival wakes a traveler and pulls her into the traditional madness and revelry of the day.

In the early hours of a February Monday, I was woken by a percussive metal clanking wafting through my bedroom window. It was the dead of night, but the sound of clashing pans, an explosive bass and toy whistles had traveled uphill from Trinidad and Tobago’s capital, Port of Spain. The noise reverberated through the neighbourhood with shockwave force—like standing under the dome of a clock tower bell while someone’s tugging at the chord.

But there were no frustrated neighbours or ghostly hollers that rang out to complain about the noise. In fact, it was greeted by flickering lights and chatter in homes across the hillside, as if all of Trinidad was communicating in secret code. They were signaling to the revelers below who were building momentum for the coming storm—J’ouvert morning.

Trinidadians, or Trinis, call J’ouvert the happiest Monday of the year. Loosely described, it’s a street party. Beginning around 3 a.m. the Monday before Ash Wednesday, J’ouvert ‘masqueraders’ or party participants march through Port of Spain’s streets smearing strangers with mud and paint. Sometimes cocoa and oil. Fire-breathing blue men and daredevils balancing on 10-foot stilts dance among the band’s masqueraders, who follow trucks loaded with speakers blasting calypso music. J’ouvert’s name comes from a contraction of the French ‘Jour Ouvert’ meaning ‘daybreak’. That’s because the festival lasts well past dawn.

It’s this stomping of mud-mucked feet parading past Trinidad’s Queen’s Park Savannah that marks the beginning of its annual, world-famous carnival celebrations.

Trinidad is the birthplace of the distinctive soca music played at Caribbean carnivals, a melodic blend born of the country’s rich Indian and African influence. The glamour of Carnival Monday and Tuesday costumes in all their feathered, glittering glory lies in the hours past dawn. Yet, on J’ouvert morning beneath the cloak of darkness, masqueraders wear plain clothes ready to be wrecked with mud.

Wiping the sleep from my eyes, I pulled on the ratty shorts and shoes I’d designated as throwaways for the morning. I clipped in the cheap blue wig I’d ordered from Amazon—a synthetic monstrosity I wasn’t hopeful would make it to daybreak—and started coating myself head-to-toe in slick baby oil.

Within twenty minutes, we’d piled into her boyfriend’s Chevy, covered steering wheel-to-trunk in trash bags. Scooting down the hillside, I noticed that what looked like piles of garbage bags from a distance were actually people’s cars, taped up with the flimsy black plastic and parked on gravel patches tucked off the main road. It was all strategy, to see whose vehicle had the best chance to escape the havoc masqueraders would be wreacking on Port of Spain.

For years I’d listened to my Trinidadian friends talk about the wildness of J’ouvert, an experience unlike any other on Earth. It’s a celebration of life, liberty and the dissolution of class, they would say. The second your foot touches the pavement, your age, race and sex are dissolved by the reverberations of speaker-topped transport trucks. At J’ouvert, you’re a masquerader, and until daybreak each player is one and the same.

It’s a celebration that’s been evolving for hundreds of years. Dirty Mas, as it’s often called, originated as a mockery of the manicured lifestyle of the bourgeoisie. When French settlers hosted elaborate carnival celebrations before Lent, the slaves forbidden from participating began their own festivities set to the sounds of calypso. While calypso music has evolved into its modern, poppy counterpart ‘soca,’ it began as a way for slaves to mock plantation owners and preserve their own culture.

By half past three, I found myself in the thick of it. Surrounded by 12-foot drink trucks pouring Black Label rum and throngs of masqueraders slathering one another in mud, I felt a ghost hand spread the gunk across my back. It wasn’t cold, to my surprise. The clay felt as warm as a hug and ignited an inexplicable craving for the goop that had me sprinting to the clay wells in a nearby yard. I found myself scooping up as much mud as I could carry and smearing it on anyone within range.

There was no aggression when it came to the sharing of mud. It was less like a middle school food fight and more like an affectionate slather party—animated by a spirit of sharing and giving, not tossing. These mucky exchanges were set to Trinidad’s 2020 soca anthems, echoed by whistle-blowing masqueraders.

For a moment, I stood still to take it all in. I found myself next to one of my Trini friends, who turned to me grinning from ear-to-ear. His smile cracked apart the dried mud on his cheeks.

“In all my travels,” he said, “I’ve never seen anything that compares to this. It’s pure freedom.”

And neither had I, for that matter. J’ouvert was unbridled joy. I’d studied anthropology during college, and here I was, suddenly transformed into a travelling ethnographer. J’ouvert was my own personal brand of participatory observation—an opportunity to experience a cultural ritual so different to those of the country I lived in.

Not 10 feet in front of me was a crew of blue devils, or ‘Jab Jabs,’ humans painted blue head-to-toe, breathing white-hot flames from their mouths on the edge of the crowd.

I was but a tiny speck in a sea of thousands of people parading around the capital in the middle of the night, helping propagate a deafening roar that made it impossible for anyone to sleep. The only way to describe the atmosphere was one of reckless abandon and human primality, which seemed to infect each and every member of the band. It was utterly beautiful.

I found myself horrified that I couldn’t keep track of every single moment—every song lyric uttered, every spatter of mud, every time a stranger’s arm had pulled me into a hug. But J’ouvert was a trance, a euphoric dream that seemed to steal individual moments and turn precious minutes into hours. It wasn’t until you’d spot the rising Caribbean sun peeking above the horizon that you realized just how much time had gone by.

As the cool of the night dissipated and daybreak’s heat replaced it, the street transformed into a sea of colour. A cloud of yellow, pink and blue powder paint erupted from the heart of the band, settling on mud-crusted arms and torn T-shirts. The lidded cup and whistle I’d been given four hours before now looked like fossils excavated from an archaeological site. The pavement beneath my feet had turned into a chalky playground paradise.

Jehanne told me the paint would still be around next year. Like settled pixie dust, it was a year-round reminder of the country’s rich and vibrant culture.

We embarked on a hunt for doubles and corn soup—the fuel that sustains all J’ouvert masqueraders. We stumbled through the streets like baby giraffes taking their first steps. Our crew looked absolutely haggard, sporting broken shoes and ruined clothing. Someone occasionally hacked out a chunk of mud they’d accidentally swallowed during the revelry. That someone was usually me.

The fact we were in such rough shape somehow made everything I’d experienced all the more meaningful. The kinship I’d felt in J’ouvert far surpassed that of any celebration I’d taken part in before. It was spiritual and ran deep, far beneath a crafted exterior. It was a connection of souls.

And we’d welcomed the start of carnival in its traditional, passionate, reckless way—through madness, revelry and unity.

Jade Prévost-Manuel is a freelance multimedia journalist with Caribbean roots based out of London, Canada. When she isn't telling stories on land, you can find her exploring life 80 feet below the ocean's surface.