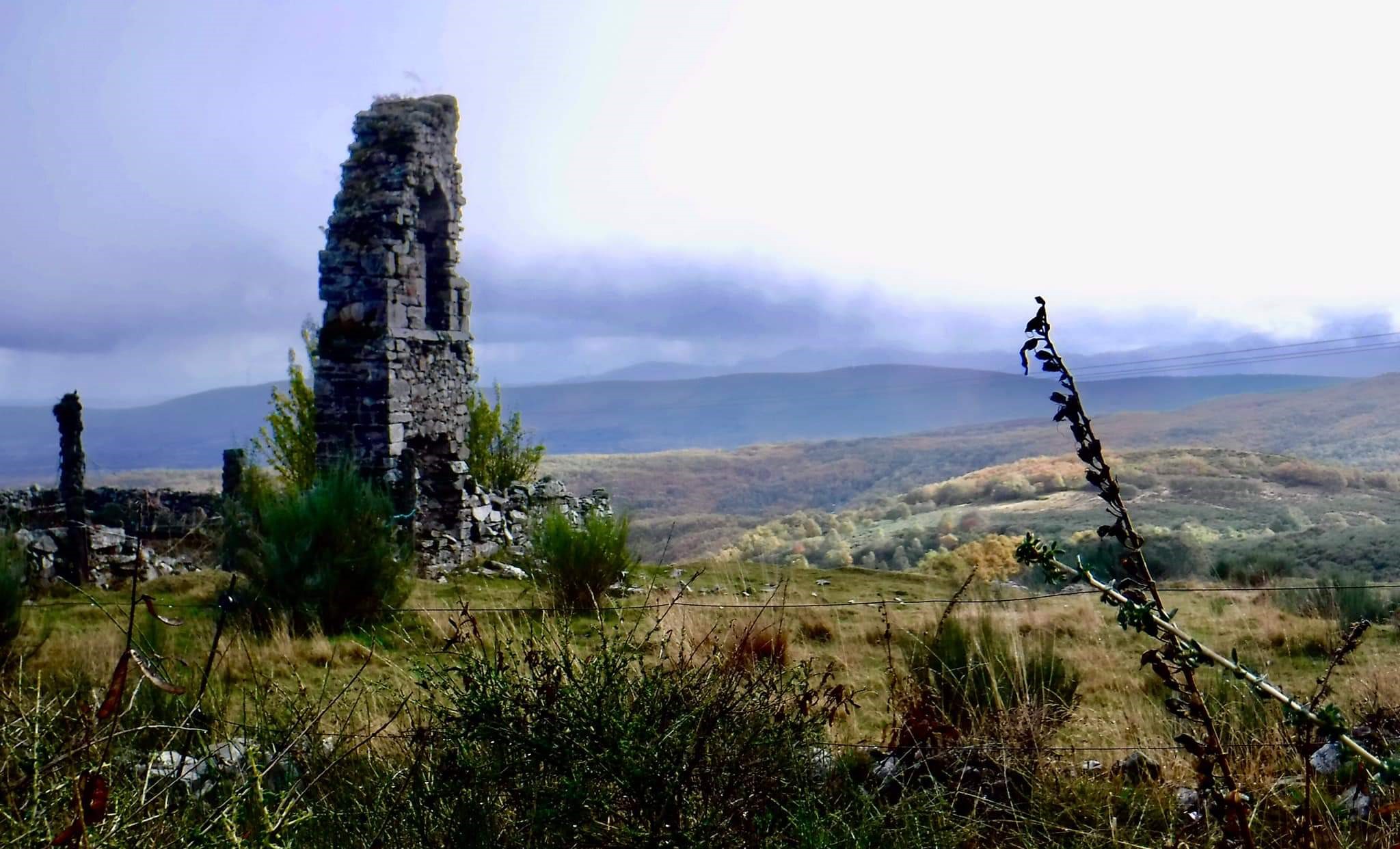 Knights on the Mountain

In the first of three stories selected as finalists for the 2020 Chance Encounters travel writing competition, a pilgrim of the Camino de Santiago meets the knight sworn to protect the travelers that cross his path.

I walk and become an other.

A wet, foggy green on the hills, a smell of cold clean earth. I am that other now, already not myself, or not only myself but a pilgrim — the anyman pilgrim from anywhere, anytime. I have been walking for weeks.

The Camino de Santiago: the ancient pilgrim road crosses the wide breadth of northern Spain, from the French Alps to the tomb of the Apostle Saint James in Santiago de Compostela and onward to the shimmering Atlantic. For a thousand years, pilgrims have walked this road, the third most important pilgrimage in Christian history, behind only Rome and Jerusalem. Seven hundred eighty-four kilometers, or nearly five hundred miles.

The long, wet climb to the Cruz de Ferro, at the border between Leon and Galicia in the west, is two-thirds of the way to the tomb. Winding mists sit in the pines. Clouds from the Atlantic blanket this whole corner of Iberia. The cross comes through the trees — a small iron cross on a tall wooden pillar, sticking out of the center of its own strange hill. It looks somehow stark and brutal. A family is here already who came here by car—they talk in rapid gallego, the regional language of Galicia and the great-grandfather of modern Portuguese.

The Cruz de Ferro has been here so long no one remembers how it came to be. Some say the site was originally an altar to the Roman god Mercury, who protects travellers, and was later adopted by Christian pilgrims. Some say it was a boundary marker left by King Alfonso VI in the twelfth century. It could possibly have been all of these things.

But it’s the strange hill that is the most remarkable. It takes a moment to realize what this is you stand on. The hill is perhaps twenty feet tall and fifty across. Small stones, most worn smooth like marbles. All different. The hill is an enormous cairn. I clamber up the cairn to touch the wooden pillar: rotting, various flags and disintegrated scraps of paper scribbled with prayers.

I swing my backpack down, fumble in a distant pocket, and pull out a small pebble. Speckled granite, smooth and round as an egg. Polished by glaciers and the Pacific, from a beach I walk often near my home in Alaska. Carried every step, like every stone in the great cairn. There’s a prayer I read that goes along with this ritual, but I’m not religious and it’s the myth I’m after, not the prayer. Where did I learn about this myth, this ritual? I don’t even remember. Read it somewhere, heard someone mention it on my last Camino. Even though its origin has rotted to dust, the myth carries on through the millenia, through the endless pilgrims.

I walk and become an other. The pebble’s skin grows warm; I toss it near the pillar. It bounces once and immediately vanishes into the cairn.

Half an hour’s walk beyond into the darkening mountains. Sierra Teleno. Tonight I’ll stay in Manjarín, according to my guidebook: “The only inhabited house in the abandoned hamlet, no warm water, crude toilet, cooking facilities; basic, but very individual hostel…first documented in writing in 1180. No internet.” The population of Manjarín, it says, is one, “Hospitalero: Tomás, who sees himself in the tradition of the Templar Knights.”

The Templar has a long history on the Camino: The Order of the Knights Templar.

Several ancient stone houses. Not masonry—stacked flagstones. I wander the handful of falling-down houses, empty. One house’s sole occupant in an arthritic tree.

Two pilgrims sit sipping steaming cups outside the most dilapidated hut of all. “Is this the hostel?” I ask. They nod. Before we say anything further, a huge bearded man in a stained sweater walks out of the hut.

“Su hermano. Pedro.” His brother. So the population’s at least two. Do I want a bed? Una cama? He speaks only Spanish.

“Si.” I know. He points to the back, where his tiny wife sits behind a huge logbook. His grin is unencumbered by front teeth. Five euros. She offers me hot water for cocoa or tea. Cats on every surface, mewing, huddled together in the autumn chill. Dozens of eyes watch me and the two other pilgrims from England, Kevin and Ian, sip hot cocoa.

The “dormitorio” is the flagstone ruin next door. Rotten mattresses, pools of dust, old magazines, and junk mercifully unidentifiable in the darkness. Six mattresses in the attic for us. Pedro lights a fire in the rusty stove. He says he’ll ring the bell for dinner at eight. Tomás will join us for dinner.

“Well, here we are.” says Kevin. We stand around the fire in the dark, laughing at our situation. There are mice in here. I can hear them. There must be a hundred mice for every cat, a hundred bedbugs for every mouse….

A bell rings and a chorus of dogs yelp somewhere. Fumbling with our headlamps in the dark. Needles of cold, must be near freezing. And there, haloed by the light of the doorway, is Tomás, last of the Templar Knights. I see an old man, rough beard, glasses thick as the bottoms of wine bottles. His coat may have at one point long past been white, now yellow and filthy, with a scrap of red cloth sewn on in the shape of the Templar’s cross. Wordlessly, he beckons us into the enclave. Cats scatter.

The four of us squeeze through the rooms crammed with objects. Books, containers, boxes. The kind of sedimentary junk that congeals into a single layer. Blankets of dust. A rudimentary kitchen and a living room, Pedro leans over something steaming. Tomás gestures toward a couch, covered in cat shit. We sit, trying to touch as little of the couch as possible. I begin to pick out objects from the clutter. “Check out the swords,” mutters Ian. There is a cabinet so thick with dust I can barely see through the glass with half a dozen rusty swords. A medieval halberd leans its ax-head against the wall. A sword on a bookshelf. A carved wooden cross. Grimy paintings of castles and knights on horseback in smudged landscapes.

Pedro carries over a huge steaming pot and frying pan, apron spread across his vast belly. We sit down at the circular table in the center, except Pedro’s wife, who hovers like a moth in the corner. Tomás prays in sonorous Spanish. Vegetable stew, traditional potato omelet, slightly burnt. Little fried whole fish, truchas. Bread, water, red wine — the Spanish staples.

Tomás and Pedro speak low, quick, the kind of natural murmuring language that people who live together for a long time adopt. To hear it in strangers, too low to pick up, is like the small-talk of doves.

I muster up enough Spanish to ask how many pilgrims they host in a year. They confer. “Mm, tres.”

“Three thousand?” I exclaim in English. Kevin and Ian look over. “They host three thousand pilgrims a year.”

The time scale shifts. Not only myself but a pilgrim: the anyman pilgrim from anywhere, anytime.

And Tomás — this whole place — everything shifts. What is a knight? A Templar? One charged with protecting the Camino and its pilgrims. One who keeps the traditions and rituals alive through repetition, carries a sword, becomes the myth. Makes it into the freaking guidebook. I think of Neil Gaiman’s brilliant novel American Gods, where the gods of the ancient world live on the streets like bums, trying to get by like the rest of us because no one believes in them anymore.

Tomás (and even Pedro and his wife) are truly knights of the Knights Templar. They host thousands of pilgrims, as did the Knights Templar, feeding and protecting them. They maintain the rituals and myth. This is what knights look like: pot-bellied, gray-haired, with filthy jackets and missing teeth. The treasure hoard of the Templars: this kitchen, the paintings, carvings, rusty swords, and ridiculous halberd. This table. Supping with knights at a round table. The sacred and the absurd are just a matter of who’s telling the story.

The next morning we gulp burnt coffee. I buy a small necklace from Tomás with a wooden Templar’s cross, which I still wear. I shoulder my pack, shiver once, and immediately vanish into the winding road.

Joe lives in Haines, Alaska, and is a librarian, wilderness guide, writer and firewood chopper. Find more at https://jaultmanmoore.wordpress.com/ and follow Instagram @joeaultmoore