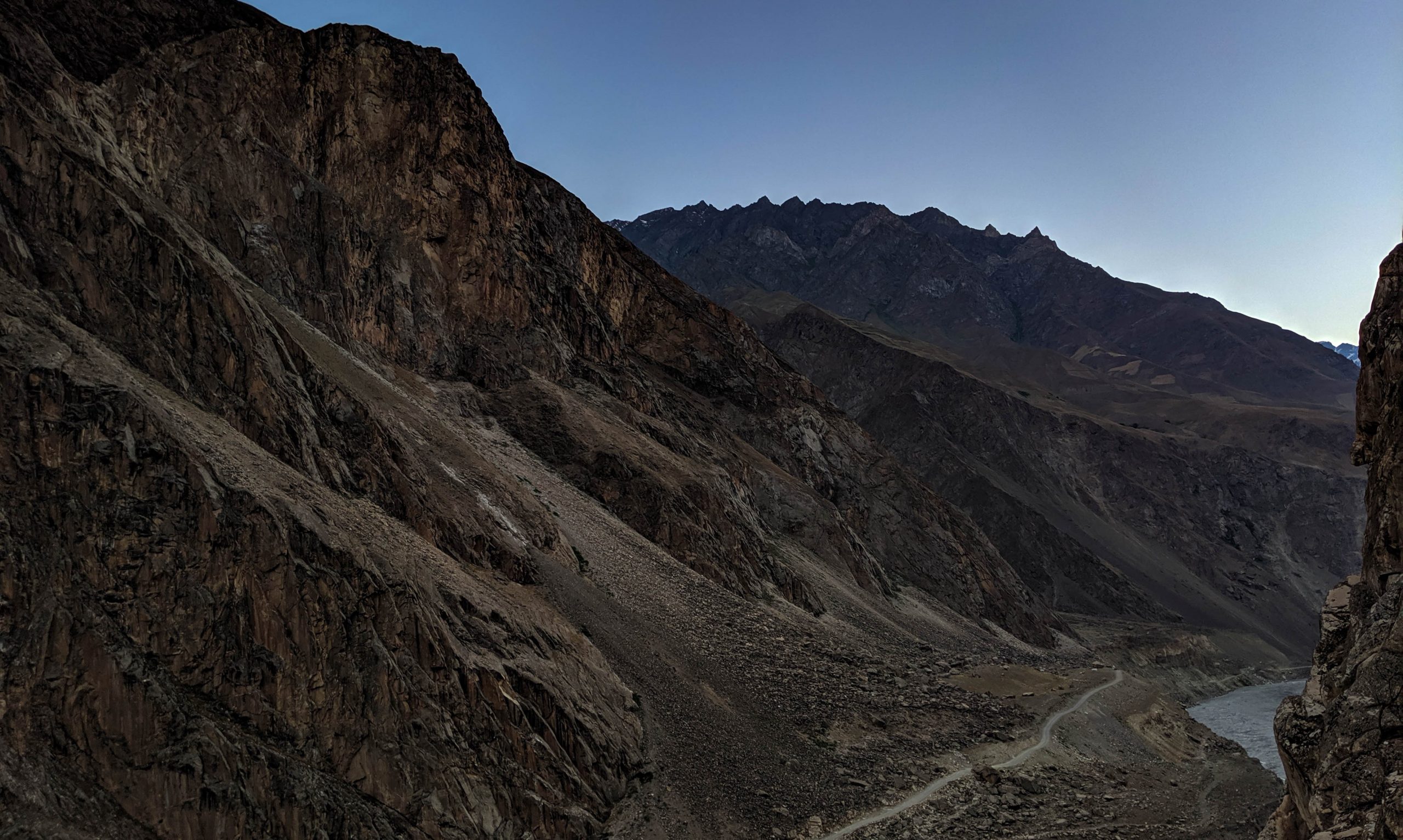 An ancient river separates Tajikistan from Afghanistan. Here, a solo traveler hitches a ride, and swaps stories with locals who live on the edge of the former Soviet Union.

The Panj River gurgles and spits. Occasionally small boulders crumble into its turbid waters from the cliffs above, swiftly disappearing into the current. Over millennia, the Panj has carved through the sharp ridges of the Pamir Mountains, cutting a deep incision into the landscape. Creases, edges, and jagged outcrops fold upwards from its banks into snow-capped peaks of incomprehensible height.

No sense of scale exists in the landscape. Vegetation rarely appears in the deep red ground, which resembles a rusted, exposed piece of metal. An occasional patch of trees signals a human settlement, the orderly fashion and vibrant colors jarring against the natural environment. The only inhabitable areas are small expansions near the river; areas of land only wide enough to fit a road and a cluster of houses. All else is dominated by rock.

In the 19th century, two empires folded into the crease of the Panj, the boundaries of their colonization efforts. I was on the former Russian side, following the dusty Pamir Highway through Tajikistan. Just across the river sat Afghanistan. The inter-ethnic language of the locals is Russian, and just a stones throw over the water it’s English.

Occasionally, when the road narrowed into a chasm, the driver would jut his head out of the window, carefully navigating the car along a drop-off. Clouds of dust and dirt drifted in through the open window, irritating my eyes and throat.

At times, Afghans happened to be perched equally dangerously on the path across the border, and they would wave and shout enthusiastically. Traveling in beat-up Jeeps, on donkeys, or by motorbike, there was no discernible difference between the people on either side.

The landscape widened, a small wooden hut appearing at an intersection ahead. The driver and his family enthusiastically invited me to their village, a diversion into another valley carved by a tributary. They said their home was only 2.5 hours upriver, a short drive considering the conditions of the road. The distance hardly exceeded 90 km. I declined, my sights set on arriving in the capital within a few days.

I got out of the car and stepped into a miniature desert, large embankments of sand deposited on the banks of the river before the water descended further.

The hut at the intersection was a security checkpoint, not atypical for this region. Four simple wooden slabs and a flat roof comprised the structure’s weathered exterior. It was textured much like the surroundings.

The guard slid open a small rectangular window slit, revealing the hut’s cramped interior. He spoke quickly and bluntly, staring at me with a coldly apathetic expression.

“Moscow?” he asked as he glanced at my passport cover. His ironed clothes clashed with the derelict wooden stool he was sitting on.

“Да,” I nodded. He didn’t examine the document, instead briskly exiting to open the gate. I kept walking, hoping there was a shop for supplies just out of sight. I rounded the corner and saw nothing but the road meandering uphill, bending, and disappearing from sight.

For the first time in hours, I stretched my legs and started walking. Specks of sand hit my face, stinging just enough to cause discomfort. The desolation emanated from all openings in the surrounding rocks. The sky was punctured by dozens of snowy peaks, the horizon no longer in existence. This was the epicenter of the largest rock mass on Earth: the Eurasian continent, an area of land so foreboding, uninhabited and removed that two global powers only pushed this far and stopped.

I questioned the trajectory that led me to this location. What curiosity had driven me through these long, arduous roads, hailing rides and stitching together hundreds of kilometers? From here on out, there was only back to civilization; there was no place further away.

In the distance I saw a moving dust cloud, the tail a sure sign of an approaching car. I stood up and laid my palm flat, signaling to the driver that I was hoping to join until the next settlement.

The car stopped, its suspension bouncing out of tune with the music from the stereo. Two young men wearing stained white T-shirts rolled down the window.

“Where are you going, brother?”

“That way.” I pointed along the direction they were moving. I wasn’t going to go backwards.

I got in the car, offering my usual exposition, details of my trip and background. I told them of my desire to see the variety of people living in the former Soviet Union, of the mysticism that Pamir always conjured in my mind, and how amazing I had thought it would be to experience it firsthand.

Their eyes widened when I mentioned Texas.

A typical question followed: “How much money do Texans make?”

I threw out an estimate, with the caveat that the costs of daily life drain a considerable portion of American salaries.

The men had come from Moscow, having riden in planes and trains and driven for several days to reach this point. Traveling from the capital to the borders of the former Soviet Union took time. Ultimately, they came so that they could deliver their salaries to friends and family back home.

A shocking 49% of Tajikistan’s GDP is remittances, more than any other country in the world. These men were on a journey typical for Tajiks, departing for Russian metropolises to work long hours in cramped housing.

Before long, we arrived in their village, where the men parked the car at a cafe. I walked inside with my new companions. There was no one in sight. No lights were on; there were just a few plastic tables scattered with discarded seed shells and cigarette butts.

My new acquaintances shouted “Amir!” and the owner appeared from the back, startled at the sight of customers, let alone a foreigner.

“Eggs?” he asked. I ordered three fried eggs. It didn’t take long for human activity to be noticed.

For nearly 20 minutes, man after man entered the cafe, some smiling and extending their hand, others nodding my presence with a short gesture.

Gold teeth shimmered in the evening light as rays of sun burst through the window onto an especially grimy wall thick with oil, dust and other gunk adhered into a thick slime. Bags of sunflower seeds appeared on the table, alongside bottles of warm yellow beer. A swarm of flies clung to any particle of food they could find.

The men were quick to pour me a glass of beer, discussing indiscernible matters in Farsi and occasionally asking me a question in Russian. An unfamiliar skepticism accompanied our interactions, the men staring at my hiking backpack and tent. Different members of the crowd would interject:

I politely remarked on the beautiful landscape, the history, the people.
The last sentiment reduced the unease. A few facial grimaces nearing a smile emanated around me.

Questions regarding money continued, though I awkwardly avoided delving deeper into the topic.

A local told me the last foreigner to overnight there was 3 days ago, a French cyclist who stopped to replace a flat tube outside the cafe. That was a day before the electricity had gone, they said, apologizing for the warm beer. They insisted repeatedly it would normally be enjoyed crisply cold.

Such events were the benchmarks of time in the village. Only the prayer calls and a new arrival signaled something had altered in the world.

The river roared audibly at all times, clamouring water constantly carving out the valley. I asked about the Panj, if the villagers ever crossed it or conducted business with the Afghans.

They told me of the occasional gun skirmishes on the Afghan side they’d witness, sometimes from inside the cafe. Not the Taliban, they insisted calmly. Just neighboring villagers raiding shops for supplies.

“They never shoot across the river.”

In 1979 the Soviet Union had invaded Afghanistan across this very boundary. Tanks, helicopters, and troops were sent deeper into these valleys, ordered to impart influence and control. The Soviets brought thousands down these same dusty roads, built barracks, and caravanned supplies. They were not satisfied with the Panj as the edge of the Soviet Union. Generals had sat at cafes just like this one, studying surveys and finding paths between the rivers and the cliffs.

Tajik men, including my companions at the cafe, joined the army and crossed the river only to discover that their enemy spoke the same tongue, worshipped the same God, and birthed children who looked the same.

The men at the cafe recounted their time in war with a sense of awe. They always thought of themselves as the last Russified people on Earth, the further Soviets still in the grip of Moscow’s hands. In reality, the mountains just beyond looked the same, the air smelled identical, the villages were inhabited in the same manner.

When the resistance became too much, the Soviets retreated. The war evolved into a civil one, a time when the Tajiks moved back and forth freely across the Panj, further cementing ties with Afghans. To calm the conflict, the Russians came in, and they secured the border once more. The two countries’ economies became intertwined again.

The men fought over who would host me overnight, each awkwardly asking me if I had a place to stay. The social interactions felt taut with self-judgment, each man measuring their character by my appraisal of them. It seemed any of my decisions would be bound to unease someone else. I brushed a fly away from my forehead, its presence intensifying my discomfort. I agreed to stay with my original driver, feeling that favoring my first interaction would deem my choice born from logic, not preference.

We walked home in darkness, staying closer to the cliff than the drop-off.
Occassionally, bright lights of an oncoming car illuminated our faces, and we would stand in a ditch to let it pass.

We arrived at my driver’s home, and I spread out my sleeping bag on a raised veranda, a dirty Persian rug laid out underneath. The next morning, I opened my eyes to a large hornet resting on my leg. My phone and wallet were stuck inside of my sleeping bag, uncomfortably jutting into my back.

I collected my belongings, said goodbye, and set out.

I walked out of the settlement and followed the road until it narrowed into a chasm once more. I stood on an overhang overlooking the Panj, the water grey and unwelcoming, steadily accelerating further down the valley. I picked up a rock and threw it as far as I could, watching as it landed less than halfway across.

It immediately sank and disappeared.

Nikita Ephanov is a writer, photographer, and visual artist from Texas, United States. Born into a Russian household, he has long been fascinated with depicting the intangible elements of the human experience. An avid hitchhiker, mountaineer, and foodie, he seeks to forge local connections from the jungles of Cambodia, to the jailoos of Kyrgystan.