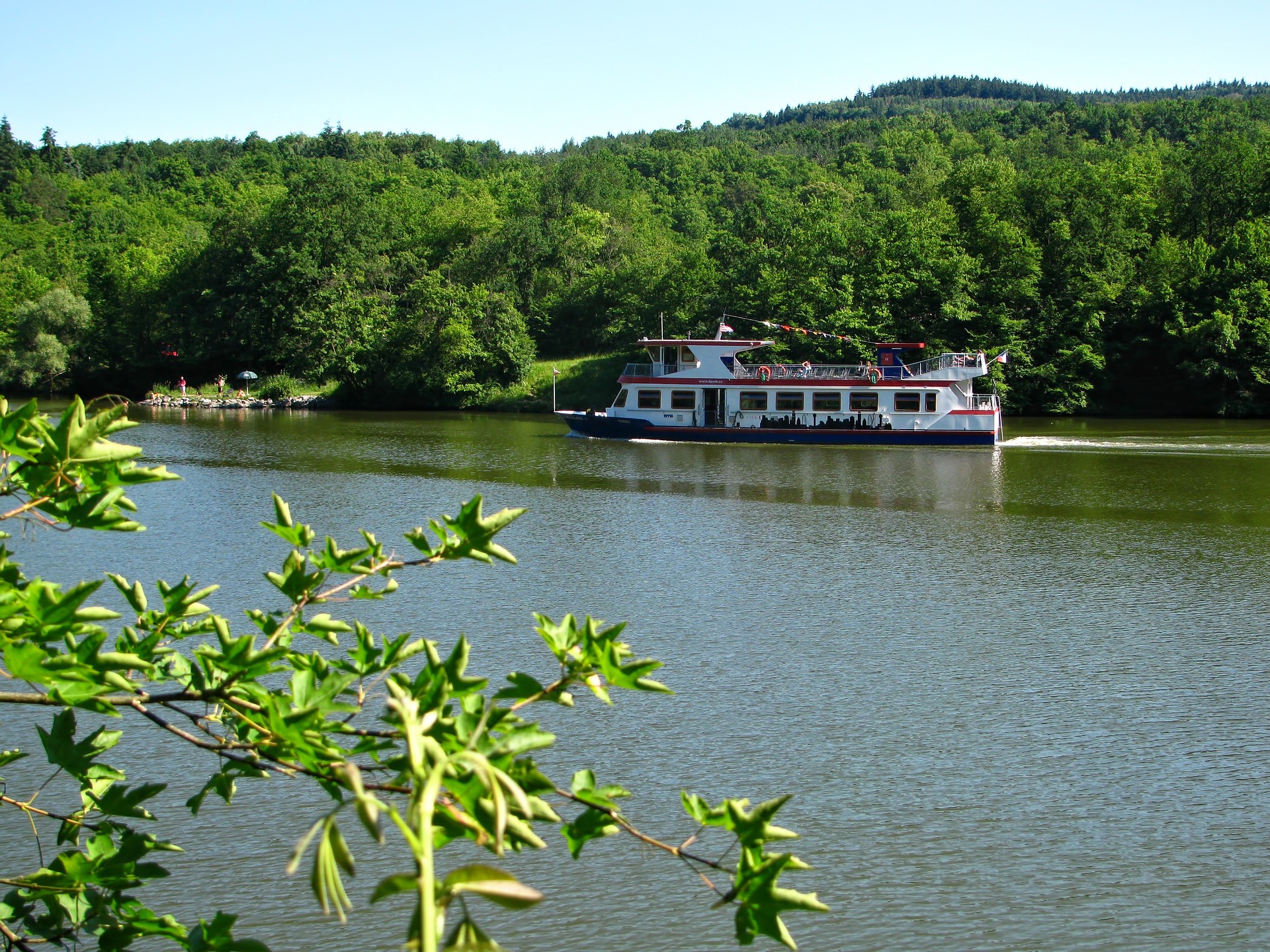 By Kirsty GordgeJuly 5, 2020Europe
No Comments

An expat living in Brno spends an autumn day exploring a nearby lake with her parents and finds joy in the moments she’s been missing.

We sat on the tram, Mum and Dad excitedly holding hands and me a few seats in front. Trams were not a normal part of their lives, as you could tell by the way they were looking out of the window with big smiles, my Mum’s feet swinging under her seat. Most people spent the journey glued to their phones; we spent it gesturing and looking wide-eyed at each other as Czech language came over the speakers and they looked to me for guidance.

They looked to me. For guidance.

It was a cold, crisp Autumn day, and we were taking tram number one up to Vodní Nádrž Brno, also known as Brno Lake. My parents were over from New Zealand, visiting me for the first time in my adopted Czech city, Brno, where I lived as an expat with my German boyfriend.

For me, it was fairly amusing. My once-foreign surroundings were completely normal; they had been ‘home’ for almost a year. But for my parents, everything was new, even after a week. I reminisced how overwhelming everything had been when I’d first arrived, and I watched my old reactions and emotions play out fresh on the faces of the two people who had historically been the responsible adults. It was surprisingly satisfying. Exhilarating, even.

“We’re getting off at the next one”, I said with an air of authority, accelerating the anticipation of adventure.

Before the ferry ride that would take us to Veveří Castle, we sipped lattes on a sunny cafe deck in the sun, next to a few others with sparkling, golden beers. A light breeze kept our coats on, and the smell of fresh focaccia bread arriving at the next table had us ‘ooh’ing and ordering one of those, too.

A simple bread with rocket, tomatoes, parmesan and olive oil united us in a taste bud explosion as we all murmured our appreciation, smiling through mouthfuls of dough.

We bought our tickets from a boat shed and watched the ferry approach, leaving ripples in its wake. The water was flat and glossy; the autumn sun shone promisingly off it, and the sky was postcard blue. We boarded the wooden boat with a few other passengers — grandparents and kids, some adults with mountain bikes — all out enjoying the peaceful, scenic atmosphere. The engine coughed, and we were away.

There was barely any other movement on the water. Fishermen sat hidden in the trees with their lines subtly injecting the surface, and the birds sung as if no-one was listening. We passed great wooden pubs with nearly empty decks, and the odd idyllic house.

After a while we moved to the top deck, and I stood next to my dad, just looking out. The castle turrets started to peak out from the trees, and we chatted casually as our destination drew closer.

Hrad Veveří (Veveří Castle) is one of the oldest and largest castles in the Czech Republic. Its history spans eight hundred years, growing from its days as a small hunting lodge, to allegedly housing Napoleon for the night, to the quiet museum it is today. We took time exploring the grounds — climbing up the lookout tower and pretending to use the toilet with a view — and sat with a sample wine from the region in the courtyard.

Deciding to hop back on the ferry and get off half way back at one of the bays with the wooden pubs, we crunched orange leaves underfoot and headed to the pier.

A short ride later, we were at the previously spotted lakeside pub, with beers (pivo) and a plate of chips (bramborové hranolky), looking out over the water and watching the ferry fade into the distance. The skies had changed, and moody, deep blue clouds developed in the now grey sky. The log fire was burning inside the cabin, but we chose to sit outside on the deck instead.

It was four o’clock. We talked about the castle, about Brno, about life, and about home. My dad was marvelling at how good the situation was: calm water, little hut with beer, unspoiled castle, nobody around. He suddenly came out with, “I always say… If you’re going to go to a ‘hrad’, go in the autumn!” We laughed at this outburst; he’d literally never said that in his life, and he’d only just learned the word hrad. The randomness of this meant it lasted the test of time and is still remembered as one of Dad’s funny quotes. The context is crystal clear in my mind, and I’m taken right back to that day.

With no Wifi connection, no data, and genuinely no need to use a mobile phone, we’d had this rare, tech-free moment of connection. Three humans. Sitting in nature. Being present.

Dad, who’d been diagnosed with cancer six months earlier, but who’d bounced back from surgery since.

Mum, who’d had a tough year and was just happy to have us together again.

Me, who’d missed out on the gory details but was grateful to be making jokes with paps again, and being squashed in big bear hugs.

It was wholly perfect.

I remember sitting on that last ferry ride from the pub to the far shore, hoping that we could stay on the boat a bit longer. Just a little bit more time. I wasn’t ready to return yet.

The sun had pierced the sky again and tore into the corners of the boat, lighting up the wood and warming our faces. We gazed out over the water towards the ferry terminal, the need for conversation dissolving away like it does after a day spent together.

We stepped off that wooden boat onto the shore, and it was like waking up from a dozy nap in a sunny space: reluctant, but inevitable.

The number one tram took us back into the city, by which point we were bright eyed again, with yet another sense of adventure. My boyfriend joined us for dinner, and afterwards we followed the sound of music to Náměstí Svobody, the main square, where a festival was taking place. People danced, sang, guzzled beers, mingled, enjoyed hot potatoes, fresh bread and cheese, and pork. We drank the first burčák of the season — a partially fermented, sweet, young Moravian wine that you can only find for a short month in autumn.

My parents left the next day; it was the end of their trip. It felt abrupt; never easy. Life has continued since, and we’re all busy in our own ways.

But now and again, I like to think back to that perfect day we spent together: at Brno Lake, in autumn. I’ll forever be grateful that we stole those moments of time by the water, the orange leaves and happy feeling burned in my memory forever.