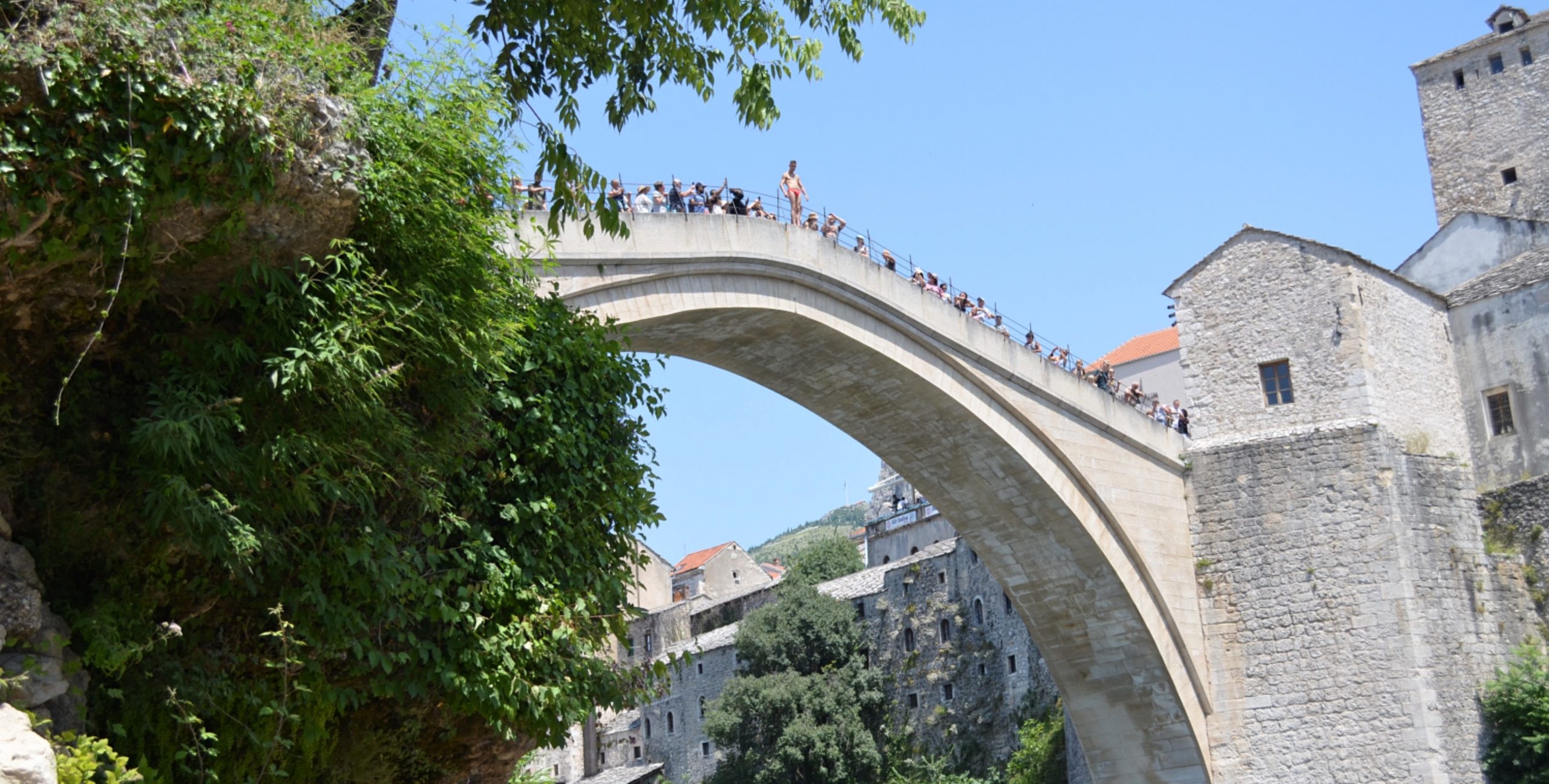 By Satarupa DattaJuly 26, 2020Europe
No Comments

A traveler to Bosnia and Herzegovina observes a death-defying dive from a bridge that has seen more than its fair share of history.

On the riverside below the bridge, a man yelped, “Just 20 bucks and our man jumps in the water,” rigging traffic to the intersection. By “our man,” he meant a bare-chested hunk-in-trunks standing at the bridge’s edge, about to commit suicide. Those below were cheering for it to happen. Tension and excitement melded into one. My head began to swim, but whether it was from this new feeling or the rising temperatures I couldn’t know. One minute my true zen self was browsing around medieval shops with craftsman’s houses above, and the next it was walled in a caterwauling hullabaloo. This can only happen in Mostar, a riverside town in southern Bosnia and Herzegovina, and my new off-the-grid find.

I started off fast-paced like any traveler, spiked with curiosity of this foreign land. I snaked through the sun-baked streets smelling of grilled meat. The heat was so intense that a bowl of raw eggs probably would have cooked on the concrete. Pushing the discomfort aside, I trudged along.

Crowds of sun-worshipping travelers had set the town abuzz. Abashed, I watched travelers high on life puffing hookahs in the many open air cafes. The road was stuffed to the gills with colorful Turkish lamps, carpets and rugs, copper artifacts, handmade lace, ceramics, and more. They called it the Old Coppersmith’s Bazaar.

Glancing down the street, it was easy to imagine this place as Istanbul’s little sister.

I continued to amble the polished cobblestone alleys, quietly agog at sights that makes Mostar a European town like no other.

On the horizon I could see the blue dome of a mosque, the only majestic bulk of the townscape, reaching out to the sky. Seeing the Koski Mehmed Pasha Mosque and walking by many horseshoe arches on facades, minarets, domes, stone houses, and ceramic mosaics, I imagined them gracing the town in the time of the Ottoman Empire. However, the most talked and written about was Stari Most, an Ottoman-era bridge squatting over the river, pulling together two sides of the town.

After my heritage walk, our group was left to self explore. My tired and heavy legs found a cozy corner café by the river. Creeper plants hooded it’s roof, hanging over the best views of the bridge and the river below. The café had the charm of a garden sitting on a ridge, bringing those of us behind its green shadows to a standstill.

Occasional gusts of wind were pulling at my hair. Everything took on a strange, dreamlike quality. I nearly dozed off at the table.

Somewhere between waking and dreaming, I ordered a coffee.

It was tastefully served in a džezva (a copper vessel holding three cups of coffee) on a round copper tray with an empty ceramic cup, a glass of water, a dish full of sugar cubes, and a jelly-like candy.

A bright-faced lady appeared in a dress that combined an embroidered waistcoat and embellished headpiece over a woven hat. Looping a large scarf around her shoulders, she looked quite in style. Side-eying her in praise, I began to consider that fashion goes beyond the ramps. And with that, she filled me in: “When you’re ready for your coffee, first take a sip of water.” I nodded with a confused gaze, and she went on: “If you want sugar, don’t drop it in your drink, just take a bite.”

She walked away quickly, orbiting around coffee tables, briefing how to enjoy our treat.

Little did I know the coffee would tantalize my frappe lover’s tastebuds with lingering bitterness.

Pulled out of my present stupor by the coffee, I watched throngs of tourists by the riverside lounging with their feet dangling in the water, eager to make the most of the sun. Many craned their necks like birds waiting for rain to fall down their throat.

It’s hard to ignore such a congregation and the emerald green Neretva River, whose color matched the surrounding peaks. I headed down and saw some traveling souls carrying on as if gearing up for a concert.

There was no sound except that of a large crowd collectively drawing its breath.

The athlete in jockstrap pulled himself up, his arms raised. Everyone present got to their feet, cheering and clinking beer cans.

They were waiting to see the 25-meter bridge jump, a free fall dive into the cold water with no protective gear.

It’s a local tradition in Mostar, a display of strength carried on for years, the guide said. The locals jump off every time some freak hands over 20 dollars.

Hundreds of tourists scattered with cameras on hand to record this one-of-kind adventure. What else would they do? For my part, I couldn’t look up.

The second the man leaped off, I sucked in a deep breath. What I heard next was an echoing “crash” that resulted in claps and hoots. Rising back up to the surface, the athlete wended his way to the shore.

Carefully scanning his toned body, chiseled like a work of art, I saw people begin to flip out dollars in his honor.

I may have considered that these daredevils were off their head, but I couldn’t hold the thought for long, for those who perform such death defying stunts are not a dime a dozen.

The iconic bridge, a common spot for the jump, was once the widest man-made arch in the world. It stood proudly for 427 years until it was shelled down in four days by the Croatian army in 1993. Much of the original stone was rescued by the local divers, after which UNESCO bestowed World Heritage status on the site.

In the name of ethnic cleansing, Mostar was turned into rubble by Croatian tanks. Under the siege, the town and its people were robbed of their cultural heritage and their lives. Over the years, both came back strong, like those fire ants rafting for weeks through floods.

Mostar now lives as a keepsake to its Ottoman architecture. Those who remain are the same Catholics and Bosnian Muslims, flying the flag of multiculturalism on this Balkan land.

I looked up once more to see the surrounding wooded hills garlanded with stone villages, waiting to be explored.

Satarupa M. Datta is a world traveller and television scriptwriter based in Mumbai, India. On days she is not working, shouldering her camera backpack, she flies off to new destinations hunting for cultures, landscapes, gastronomy, art, and shots that tell stories.