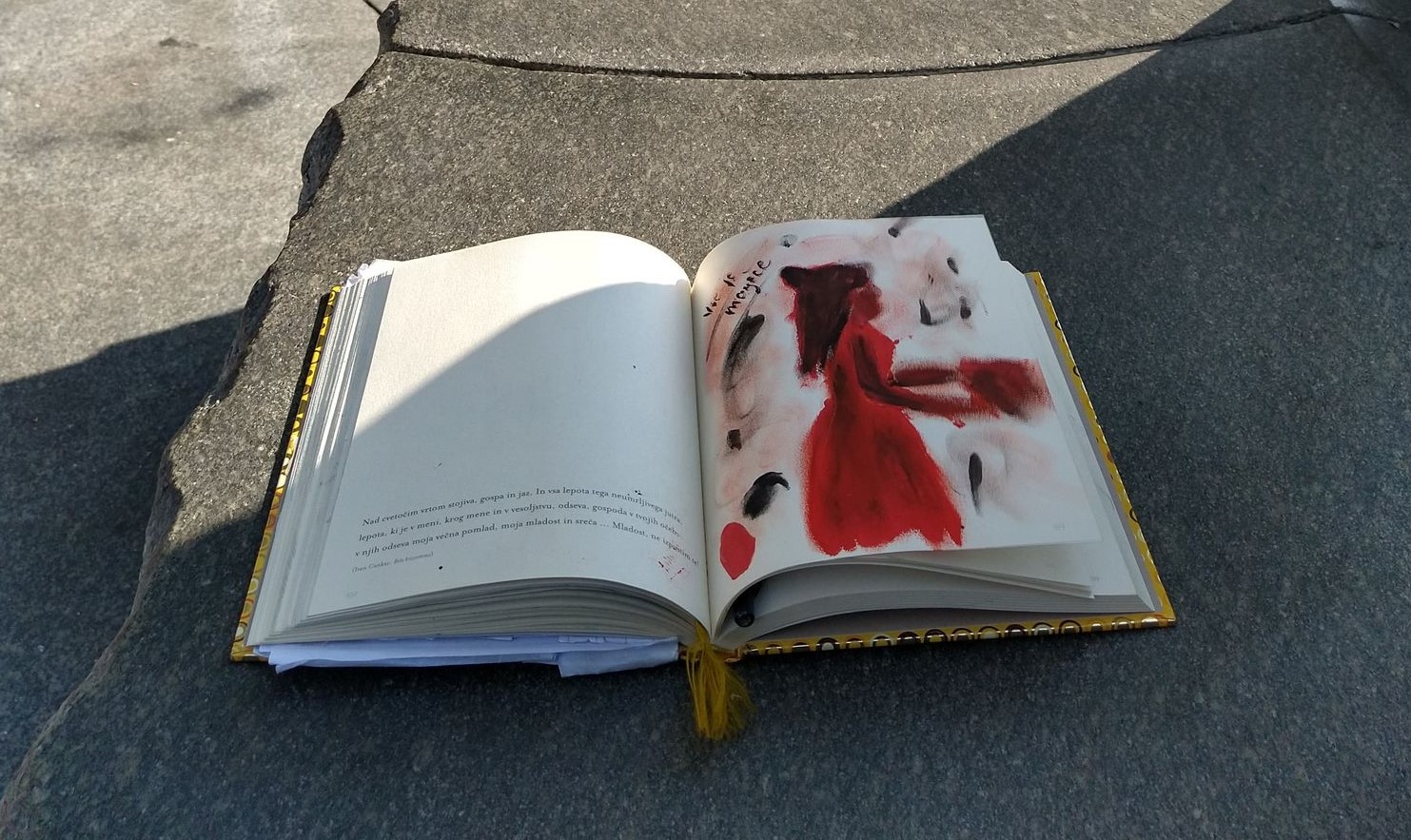 A chance discovery of a lost notebook in Slovenia’s capital sends a traveler on an epic quest to return the diary to its rightful owner.

Stumbling off the night train at Ljubljana station, I wandered into the 8 am sunlight in search of adventure. While looking for the city center, a pink church by a large river appeared before me. Between the two stood a monument; a place to sit and find accommodation.

After a few minutes of lazy people watching, I noticed a book perched inconspicuously beside me. It was an unnoteworthy notebook, yellow and covered with colored circles. Despite my attempts to ignore it, the book captured my gaze.

It was clearly well-used, with scraps of paper bulging out. There was even a pen tucked inside. The book was surely bursting with local knowledge, which is exactly what I was seeking on my first trip to Slovenia.

Something about this notebook seemed special. It was like a treasure chest of authentic, hidden knowledge. No spin, no agenda, just one person’s thoughts and experiences etched onto paper.

Ten minutes passed, and no one so much as glanced at the notebook, let alone came to collect it. It just sat there, somehow appearing lost, alone, and desperate. There’s a taboo against looking in other people’s journals, but at this point, one of two things was true: either it was left here deliberately to be found, or someone had lost the book and wanted it back. Either way, I had to peek, didn’t I?

The first page was clearly a letter, with joined-up, slanted handwriting, presumably in Slovenian. The letters were hard to make out, but I tried popping it into Google Translate anyway. “Dear Julie,” it read, “I eat very happy, I eat three lilacs.”

To crack the code, I’d need help. Sanja, the local woman sitting next to me, seemed like she’d have the necessary skill set.

“Excuse me,” I asked, “is this your book? No? In that case, can you help me figure out whose it is?”

Somewhat bewildered, Sanja kindly agreed to take a look at the letter.

“It’s written for Julija,” she explained. “It’s from a headteacher wishing her luck at high school, dated October last year. That makes Julija 14 or 15.”

Great, now we’re getting somewhere! The other pages were filled with sketches and paintings, as well as quotes from a local writer, Ivan Canker. He was a freethinker and social critic who embraced Nietzche and rejected dogma. His frequent appearance in the notebook revealed something of Julija’s personality: thoughtful and idealistic.

From the sketches, I hoped to discover what Julija looked like. A drawing of the same girl appeared repeatedly, often with a male companion. Surely this was a self-portrait. Even so, my hopes of finding the owner were diminishing. Why don’t kids label their stuff these days?

There were a few phone numbers in the back. If there were no more clues, I’d have to give them a call and ask if they knew Julija. Luckily, it didn’t come to this.

It took foraging through almost every page to solve the riddle.

There! Near the front!

I’d missed it at first because it was written faintly in faded pencil markings: Julija followed by another word which, although unfamiliar, was surely a surname.

Excitedly, though with cautious optimism, I typed the name into Instagram. It was at least a start, even if it revealed a million results.

This caused a spike in my heart rate. Surely no further confirmation was needed; this was the owner. “I’ve found her!” I exclaimed to Sanja.

Notably less excited than me, she wished me congratulations. But still, we needed to contact Julija. The profile was private, meaning I couldn’t send her a message. The name produced no results on Facebook, and I’m not on any other social media; certainly not the cool new apps used by today’s youth.

There was more information in the bio, though; notably a four-letter acronym. Sanja told me it was a local photography and design school. Google Maps informed me further that this was a mere eight-minute walk from the monument on which I sat. Sanja said there would be someone at the front of the school who’d ensure it got back to its rightful owner.

Walking with confidence along the river, I bathed in the warm morning sun. The water lapped gently beside me, guiding my route past imposing Baroque buildings, countless grand, stone bridges, and pastel riverside apartments with their rust-colored balconies. It was a wonderful walk through a picturesque city center.

On arrival at the school, the gates were locked. There was activity inside but no way to just walk in. Knocked back to square one, I was unsure of how to proceed.

I slumped onto a bench and began munching on some energy bars that were stashed at the top of my backpack. It had already been a long morning, devoid of coffee or breakfast, consumed solely with this book. I continued flicking through the pages, enjoying the drawings.

“Love is Beautiful” filled one page, surrounded by hearts and stars. It sounded very high school, but, based on the quality of the sketches, I sensed a maturity in Julija. This spawned wonderings about the importance of art and literature in Slovene culture.

Back to the monument. If I wasn’t able to return the notebook, it would be interesting to at least learn a bit about where I found it. What was it about this place that made it Julija’s chosen chillout spot?

The statue at the monument is of France Prešeren. It turns out he’s perhaps Slovenia’s greatest national figure. A poet, not a warrior, Prešeren is credited with saving the Slovene language and inspiring the creation of the unified Slovenian nation through his promotion of liberté, égalité, and fraternité. His poem, A Toast, has since been adopted as the Slovene national anthem.

Above the statue of Prešeren flies a muse. The poet’s real muse was an aristocrat named Julija, who lived in Ljubljana. Julija was said to be a muse for all of Slovenia, but her refusal to return Prešeren’s lifelong love was putting the survival of the Slovene people in jeopardy. Get it together, Julija.

There must be more clues in her Insta bio. She’d tagged her boyfriend, which was luckily made public. Time to slide into his DMs. At this stage, it was all I could do.

Before I could get back to finding a bed for the night, Julija’s boyfriend (who sadly, isn’t called France) had messaged me back.

“Yes it’s hers. Can you leave in my mailbox? She will be happy. Thanks man.”

After receiving the boy’s address, I tightened my bootlaces, strained to get my very full backpack on, clipped together the sternum strap, and started walking. It was 90 minutes there, and presumably the same back, but there was little else to do.

As city walks go, this was one of the most pleasant. Firstly, I had a mission: to safely return Julija’s notebook. At the same time, this was a chance to explore the suburbs of Ljubljana. Most of the time was spent thinking about Prešeren.

Few countries are so dependent on an artist to secure their status as a nation state. War leaders? Yes. Politicians? Amazingly, yes. Artists? Not so much. Yet Slovenia’s most prominent national monument features a frail-looking, long-haired man, clutching a book.

Ljubljana, it turns out, isn’t big. Within an hour, it was clear this wasn’t Slovenian Suburbia. The grand stone architecture of the city centre had been replaced by vast, open space, overgrown fields, old, wooden farm buildings, clusters of trees, and mountains like ocean waves lining the horizon.

As I strolled, the scenery inspired poetry.

“Ljubljana I love you,

Though I can’t pronounce your name.

That I’ve met on my way.

The ones I took out drinking,

As I lusted after you.

Left my lover at the bar,

For a city mountain view.”

I didn’t know what it meant at the time; it just kind of rolled out of my head. But here, hugged by mountains, was a poetic experience. With traditional Slovenian songs ringing in my ear, I sank deeper into an unknown culture with every step.

The road up to the house seemed to be the last in the city. It was a dead-end, a small strip of concrete with no footpath. The houses were modern, cube-shaped buildings, somewhat contrasting the rural surroundings. The penultimate one was mine. Beyond, there was nothing but grassy fields stretching towards the olive-green mountains in the distance.

I left a little note to Julija in her notebook and pressed it gently into the mailbox. It was almost sad, yet definitely satisfying. Her book was safe, and I’d learned so much about Slovene culture on the way.

At the end of the road, there was a small hill, covered with invitingly soft grass, where I threw my rucksack — and then my body — to the ground.

Glancing around, there was nothing but mountains and farmland as far as my gaze could reach. There was Slovenia, unaltered by urban planning. I saw, plain and simple, Prešeren’s second greatest muse: the mountains. And it felt like the journey into Slovene culture was merely beginning.

Editor’s Note: This article resulted from our “Your First Published Article” scholarship program. To be informed of more opportunities for travel writers, follow us on Facebook and join our free Newsletter.

Thom is a digital nomad and world traveller. Since losing his job in Ghana due to Covid-19, he set up thombrowntravel.com to spread ideas on how world wanderers can embrace more sustainable, ethical, and meaningful travel.