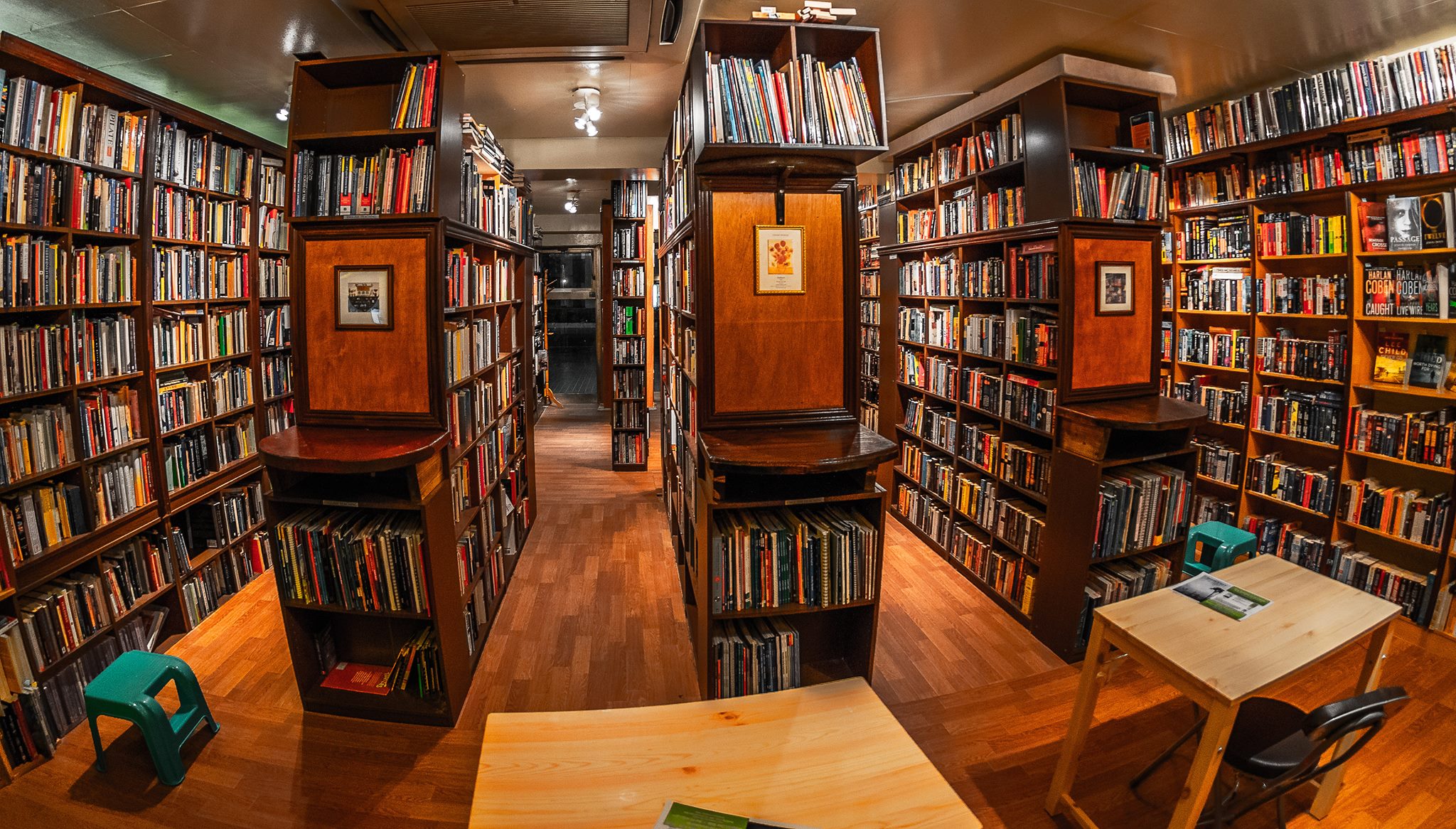 Finding Solace in a Tokyo Bookshop

A spontaneous drinking bout in a Tokyo bookshop helps a jaded expat rediscover the spirit of travel.

“Well that’s certainly the most pissed I’ve been in a bookshop,” I wheezed in between slugs of water, through a mouth dry as jerky.

“I thought you were only having one beer last night?” my girlfriend offered. I could hear the distant sounds of a dead horse being flogged.

Unceremoniously pinballing home from the other side of Tokyo following a trip to purchase books is not, you may gather, a normal occurrence. But given how 2020 has gone, I reckon we can revise the definition of that little adjective, “normal.”

The pandemic has ensured the traveler’s life is unrecognizable from several months back – as is the imbiber’s for that matter.

So, when I braced the frightfully packed Tokyo subway network en route to one of the Japanese capital’s last remaining second-hand English bookshops, I was prepared for all eventualities.

I had come across Infinity Books and its Yorkshire proprietor, Nick, during a story I was covering for a local magazine. Supporting a small business – beyond mere coverage – operating in an aging industry, which I hold quite dear, felt less like a good deed than a matter of moral duty.

Plus, I was growing a pretty staunch aversion to eBooks after two months buried in my Kindle during the government’s stay-at-home requests. I longed for dog-eared paper, author’s names branded on fraying spines, and sentences that don’t mysteriously highlight as I try to turn the page.

Sitting on a featureless thoroughfare under the dystopian gaze of Japan’s tallest manmade structure, Tokyo Skytree, Infinity Books is quite a contrast to the architectural phallus brooding over it. I love living in Tokyo, but the city has been developed into an aesthetic brute: a towering expanse of uniform shopping malls and corporate prisons slapped in neon makeup come nightfall.

On walking through the doors of Infinity Books, however, I couldn’t suppress a Cheshire cat grin. Now that’s character.

I wound my way through narrow aisles separated by hand-built, antique cabinets, licked in dust. Old tomes bulged with sepia-stained paper, filling the air with a musty-sweet scent. Pulp novels with hair-brained plots and cover art I can only presume was drawn by someone with a predilection for hallucinogens lined the shelves alongside unread birthday gifts housing cheesy notes scribbled on their inside leaves. It was a lens across time; a capsule of memories trapped within the concrete cosmos of Tokyo.

Recognizing me from a brief video interview the day before, Nick yanked me out of my reverie and bid me to pull a stool up to the store counter, where he unsheathed a beer tap hiding rather conspicuously behind a towel – much like a cartoon character might comically hold up a curtain to cloak themselves from pursuing goons.

“I promised you a pint,” he reminded me.

Over more beers than an empty stomach is like to welcome, we shot the shit in the fashion of two old friends. I eulogized the death of second-hand bookshops, while he insisted he was “the last in Tokyo run by a gaijin (foreigner).” I romanticized the idea of being a bookseller in an age where Amazon is monopolizing the industry; planting a flag on that lonely hill in an act of literary martyrdom. He reminisced about his days manning the kegs in one of Tokyo’s first British pubs, named The Fiddler – a nod to his affinity for Celtic folk music.

As the night drew on, instruments were unleashed. I plucked badly on a ukulele banjo; he played a rather soulful number on a large metal flute. A few nameless faces came and went. One or two “regulars” – insofar as you can use that term in a bookshop – stopped by for a quick chat and a pint for the road; fellow gaijin who’d been living in Japan since I was a mere spermatozoa searching for a fertile egg, donning their rose-tinted shades to speak of the old days before the bubble burst and the tourists landed.

My last cogent memory shows me sitting on the other side of the counter, a cigarette dangling from my hand, a tip of ash growing outward like Pinocchio’s nose before canoeing precariously over my T-shirt. We were howling with laughter at The Commitments, a pulp classic of Irish independent cinema about a ragtag soul band in Dublin, blaring from Nick’s PC monitor.

And this is the approximate point at which memory no longer serves.

The next day, following a couple paracetamol and reservoir of water, I was struck by a notion; one I haven’t been able to shrug since. Like a faint whisper coming from my inner monologue.

After Covid-19 ensured all my plans for 2020 went up in flames, my nomadic inspiration deserted me. How was one to travel in a socially-distanced world, where a walk in the park was seen as a feat of adventurous bravery? For a few months, putting pen to paper on matters concerning anything other than the global pandemic felt like a Sisyphean task – I guess that’s why they call it the writer’s block?

I may only have been an inner-city train ride from home, but that Saturday night in June was the true essence of travel down to its very core. Travel is not dictated by destination, distance, exoticism, or remoteness. Travel is about perception; it’s a mindset. Travel is the people you meet and the experiences that are so inherently singular to you.

So yes, that was the most pissed I’ve been in a bookshop. But something in the alchemy of the evening helped rid travel juices of their viscosity. Trip plans have finally returned to the calendar, and the keyboard is no longer weighed down by the burden of Covid-19. That’s worth any hangover you swing at me.

And, I even managed to leave with some books.