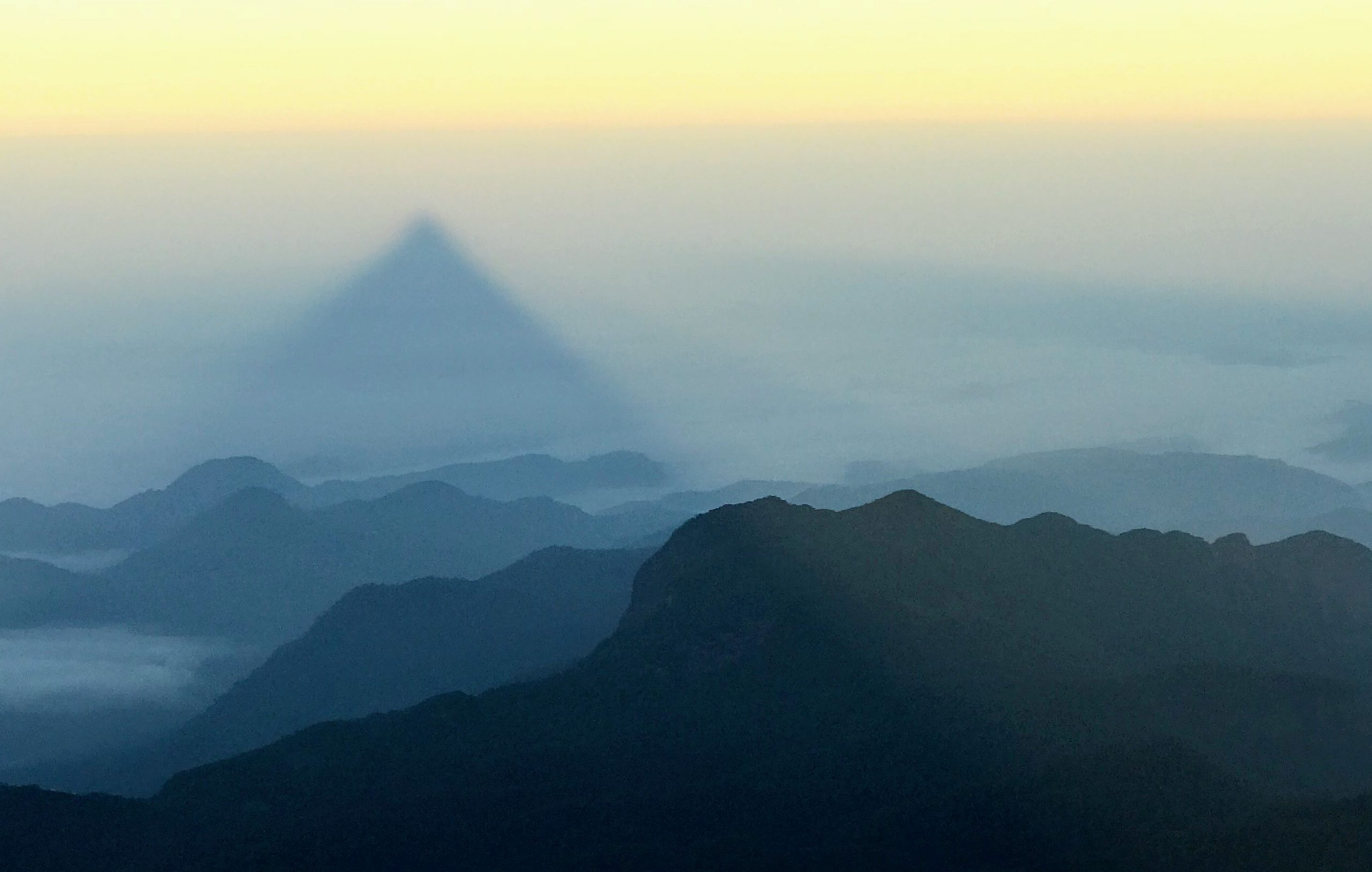 The Shadow of Sri Pada

By Jennifer SizelandNovember 24, 2020Asia
No Comments

A traveler in Sri Lanka leaves the comfort of the beach to seek out a sense of spirituality atop one of the country’s most sacred mountains.

It was just before Christmas when I landed In Sri Lanka. A tradition that passed without much comment as Christian communities are few and far between. Exhausted from months on the road, I spent two weeks celebrating the new year on the beautiful beaches of the south and west coasts. Fuelled by the beautiful images all over the internet, I had an idea of the country as a beach paradise. Having arrived here from India, I had no idea that this peaceful island had a similar level of spirituality to the chaotic continent. As it’s intense history would suggest, religion is a central tenement to Sri Lankan life.

While it calmed my anxiety to watch the palm trees throwing shadows across the impossibly golden sand, I suddenly sat up. Listening to the waves lulled me into a horizontal position, and while there I was missing what the country had to offer. It was time to endure the journey inland with the disco lights from the bus’s shrine dancing across my eyelids. Two girls turned around to tell me I was pretty as I plotted to get under the skin of Sri Lanka.

Up until then, the most I’d felt was the uncontrollable urge to vomit on a whale-watching boat trip off the coast of Mirissa. I gave in and hurled. Flicking through my guidebook, I asked my boyfriend to drive us to a cave temple hidden deep in the countryside. The endless roads were lined with green, which made navigation difficult, and I had to stop to ask for directions. After a previous stop at a ropey blowhole that was full of tourists, I considered turning back. Then we turned a corner and three pilgrims were on their knees, using colored dust to create a mandala painting on the ground. Their painstaking work was to welcome in luck for the new year.

Behind them was the only big rock in the area, lined with grooves made in the stone for pilgrims to climb. Along the route were small hollows filled with golden Buddhas. There was very little natural light, yet I could see everything. It was empty, apart from the toque macaques sneaking around on two legs, their arms filled with the flower offerings they planned to eat. Nobody was doing a bikini photoshoot here, just canopy-dotted views and monks ambling up and down. I felt a twinge of spirituality that made me want more.

We had booked a bus to the hill station of Ella, a lovely town in Sri Lanka’s tea district that had been well and truly discovered by the Instagram crowd. Close to our hotel was Little Adam’s Peak, named after the much bigger pilgrimage mountain. Clambering up this lesser cousin cemented in my mind where I needed to be. The number of foreigners on our train meant that I missed all of the incredible views of the tea plantations, but I knew in my heart it was worth it. On the bus from Hatton to Nallathanniya were unobscured views of the Park Wilderness Reserve. The breeze was colder, but I felt I was getting warmer.

From the center of Nallathanniya, I could see the dangling neon lights strung across Sri Pada, or Adam’s Peak, Sri Lanka’s most famous mountain. They are turned on for the pilgrimage season and switched off when it ends. These precariously wired chains are necessary, as the purpose of the trek is to get to the peak before sunrise. Anyone trekking out of season must take their chances of a scramble to the peak in the dark. If it was the weekend then we would have to join the queue, but thankfully it was a weekday, so the crowd was much smaller. It was just the right time.

Sri Pada is revered across a spectrum of religions due to the footprint-shaped mark on the top, created by Buddha or Adam, depending on your persuasion. My preparation for the hike involved a cursory nap and stuffing my pockets with sugary snacks. We set off at the dark hour of 2 am, joining the steady trickle, like the first salmon swimming carefully upstream. The first two hours were a blur, the tea shops were mostly closed and nobody said a word. Just a steady click-click of walking poles followed by the offbeat clump of a sneaker or a flip-flop.

About halfway up, the tea shops flicked their lights on as they sensed fatigue amongst the mountain community. At this point, it got steeper, and the hikers got close for the first time, forced into a concertina to tackle the narrower parts. I passed a monk, unfit from his years spent living in a compound, being hauled up the steps by four much smaller pilgrims. They laughed and chatted despite the Herculean effort required to carry someone’s body weight up the mountain.

While tourists can be pushy, even on treks like Everest Base Camp, everyone waited serenely. Nobody misbehaved on the sacred mountain, and there wasn’t a selfie stick to be seen. 5500 steps later, we took our place on the makeshift bleachers, facing the direction of the sun.

A stray black and white puppy shuffled his way through the weary hikers to plop down next to me. I’ve always thought of myself as a stray, travelling the world while very much reliant on the tolerance of strangers, kind to me regardless of my scruffy appearance. We pulled a makeshift blanket over ourselves and stared into the blackness. The heads of those we passed steadily popped up over the steps as they joined us at the summit. Two young men weaved through the throng with a flask, offering hot coffee to stave off the shivers. The backpackers next to me said no, concerned that it would be unsanitary. I asked them how much, and they said it was free.

I felt cowed by my own cynicism; they worked for the temple and gave out hot drinks to everyone, regardless of religious persuasion. As my hands curved around it, I tried to soak in this spirit of community. Friends, colleagues, worshippers, and strangers all gathered with a shared purpose. Little did we know that a pandemic would reunite a global community, that the Western world would start chatting on its doorstep again.

The men had the timing just right. The sun started to peer through the clouds, and we were lit by a dramatic shaft of light. It inched over to the beat of the drumming ceremony that struck up. Once the sun was high enough, I slipped off my shoes and went around the back of the mountain. There was a perfect triangle of the shadow of Sri Pada, caught by clouds beneath. A beautiful moment that happened every morning for anyone prepared to make the climb during the hours usually spent asleep. Normally, my eyes would never have been open to spirituality at 6 in the morning.

A new world awaited us on the way back, unveiling the lakes and forests lit by the optimistic, early light. The toque macaques arose to make eyes at the tourists eating a snack. At 9 am we were served breakfast back in our hotel as if it was all a fever dream. In place of anxiety and inferiority, I felt peaceful. I thought of the monk and his four dedicated helpers; they hadn’t made it to the top as we descended, but they were still laughing.

Jen Sizeland is a British writer and producer based in Manchester in the UK. She writes for various publications about ethical and eco-friendly living and travel. Her blog is called Land of Size.