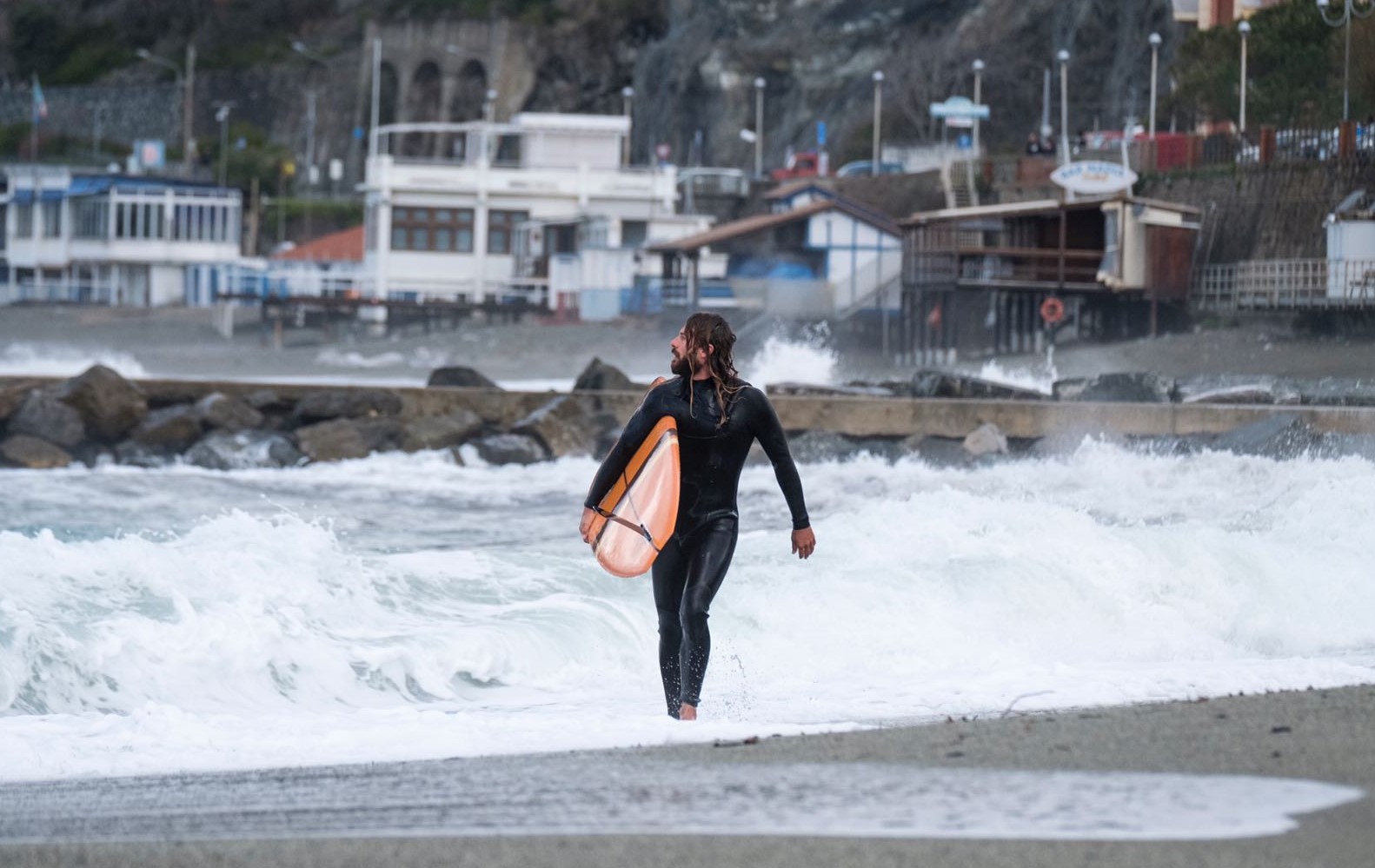 A Kiwi traveler in Italy finds that riding the waves is the perfect way to overcome the language barrier and make a connection with locals.

When I looked into the man’s eyes as he surfed unsteadily across the face of the emerald-green wave, I saw a deep, primitive, and child-like joy that was so familiar to me. The turbulent sea was crowded with zealous Italians, paddling frantically on their surfboards, shouting at one another and jockeying for prime position like seagulls scrapping over a picnicker’s unattended sandwich.

I was the outsider, the tourist, the one that didn’t speak the native language. It’d been a challenging few weeks in Italy adjusting to such a strong and unique culture. However, in the sea, there was one common denominator between us all: passion for the simple and pure act of surfing.

Yet it was the pursuit of love, not surf, which had led me to Italy. I followed my amore across the globe to her hometown in the mountainous Trentino region. Immediately, I was warmly accepted into her family in true Italian style. Despite the language barrier, we did our best to communicate through a combination of expressive hand gestures and constant, frantic translation through my partner.

We passed our days by hiking through the Italian Alps, still dusted with snow from the tail end of winter, while the evenings were spent around the dinner table, sharing beautiful meals. My partner’s family made it clear that I was never to go hungry while in their household!

Although an enriching experience, the fast-paced Italian culture and the lifestyle I’d left behind in a sleepy coastal town in New Zealand were oceans apart. The hustle and bustle, the loud and enthusiastic dialogue, the reckless driving: it was a shocking contrast to the reserved Kiwi way of life. I was underdressed at all times, even outshined by homeless beggars on the streets of Milan who flaunted tidy black leather loafers and sports jackets. I’d dived head-first into an authentic Italian way of life, and was very much a fish out of water.

To add to that feeling, I hadn’t seen the ocean in over two weeks.

Italy was far from a mainstream surfing destination. Even so, I’d brought two surfboards with me—much to the perplexity of the airport staff—in the hope of discovering some elusive Italian waves.

To receive surf, the north-west coast of Italy requires a low-pressure weather system to form in the southern half of the Mediterranean, near Sicily, and direct swell northwards. One such storm materialised a fortnight into my stay; after some persuasion, I was loaded with my partner and her parents into their Citroen campervan, heading west.

The majestic mountain ranges and lush valleys of Trentino flattened out to the vast plateaus of Lombardy. Nearer to the Ligurian coast, the roads narrowed and started winding their way down steep cliffs in a series of tight, hairpin corners—a precarious drive in our cumbersome camper. At last we reached a quaint Italian coastal village, and I caught a glimpse of the sea, azure blue and shimmering in the afternoon sunshine. There was no surf yet, but the salt air filling my lungs revitalized my soul.

I found myself alone on the cobblestone waterfront at first light on a grey Sunday morning: a contradiction to the previous day. The stiff ponente wind blowing off the Mediterranean carried with it a vicious chill. I cast my gaze over the surf conditions: dark green, unruly, and cold. Unforgiving waves broke upon the harsh gravel beach; by no means world-class, but a welcome sight nonetheless. A tingling sensation began in my chest and crept towards my extremities, a physical manifestation of excitement.

The coarse gravel worked its way between my toes as I approached the water’s edge, surfboard under my arm. My partner and her parents were watching intently from the boulevard as I took my first baptismal dive into the frigid acqua. Cool spray stung my eyes as I paddled into the Mediterranean Sea.

I caught the first wave, stood, leant my weight into a turn, and navigated the lumpy wave face until the energy dissipated. Overcome by a dizzying sense of exhilaration and gratitude, I paddled back out, caught a second wave, and a third.

Then, turning to face the shore, I noticed a congregation of Fiats, Citroens, and Volkswagens in the car park, many with surfboards strapped to the roof racks. I obviously wasn’t the only one keeping a watchful eye on the weather charts.

Within an hour, the sea had turned into a frenzied mass of vigorous wave-riding. The Italians—fiery and passionate at the best of times—applied the same principles to their surfing. In the water, however, we were operating on the same vibrational frequency. For the first time since my arrival on The Boot, I felt a strong mutual connection with the local people.

Hoots of delight and expressions of elation were universally understood; no translation needed. Glances and nods from the other surfers in the line-up confirmed my acceptance into the surfing fold. After tentatively stepping my way through a foreign culture, I finally found a parallel in the sea with those who I may not have been able to relate to on land. We were all out there, braving the adverse conditions, for the same purpose, the same feeling. There were males, females, old and young, beginners and experienced surfers, all gathered in the same watery cathedral, a communal place of worship.

And so we surfed, an eclectic mix of humans assembled in a tiny corner of Italy, in pursuit of a common goal. Waves were shared; wipe-outs were had; a good time experienced by all. My partner’s family were wide-eyed when I returned to shore, in disbelief at how many surfers had materialized to ride the wild Mediterranean. Despite not having surfed themselves, the looks on their faces confirmed that the positivity radiating from the sea was contagious.

The core purpose of surfing is to be completely enveloped in the moment; present, free of distraction, experiencing life in its most stripped-back form. Once all the social barriers and cultural preconceptions that the modern world forces upon us are eliminated, it can be observed that we’re not so different from one another. As stated by big-wave surfer Laird Hamilton, “We’re all equal before a wave.” Can surfing play a vital role in achieving some form of social equality? Paddle back out there, and you may find the answer.

Andrew Earl-Peacock is a Kiwi writer in constant pursuit of surf and new experiences in the great outdoors. His travels have taken him to many remote corners of the world, including Iceland and Southern Chile, as well as the furthest reaches of the New Zealand coastline. Andrew is currently based in Dunedin, in the South Island of New Zealand, and writes articles for his personal blog: https://aephandmadegoods.com/blog/.