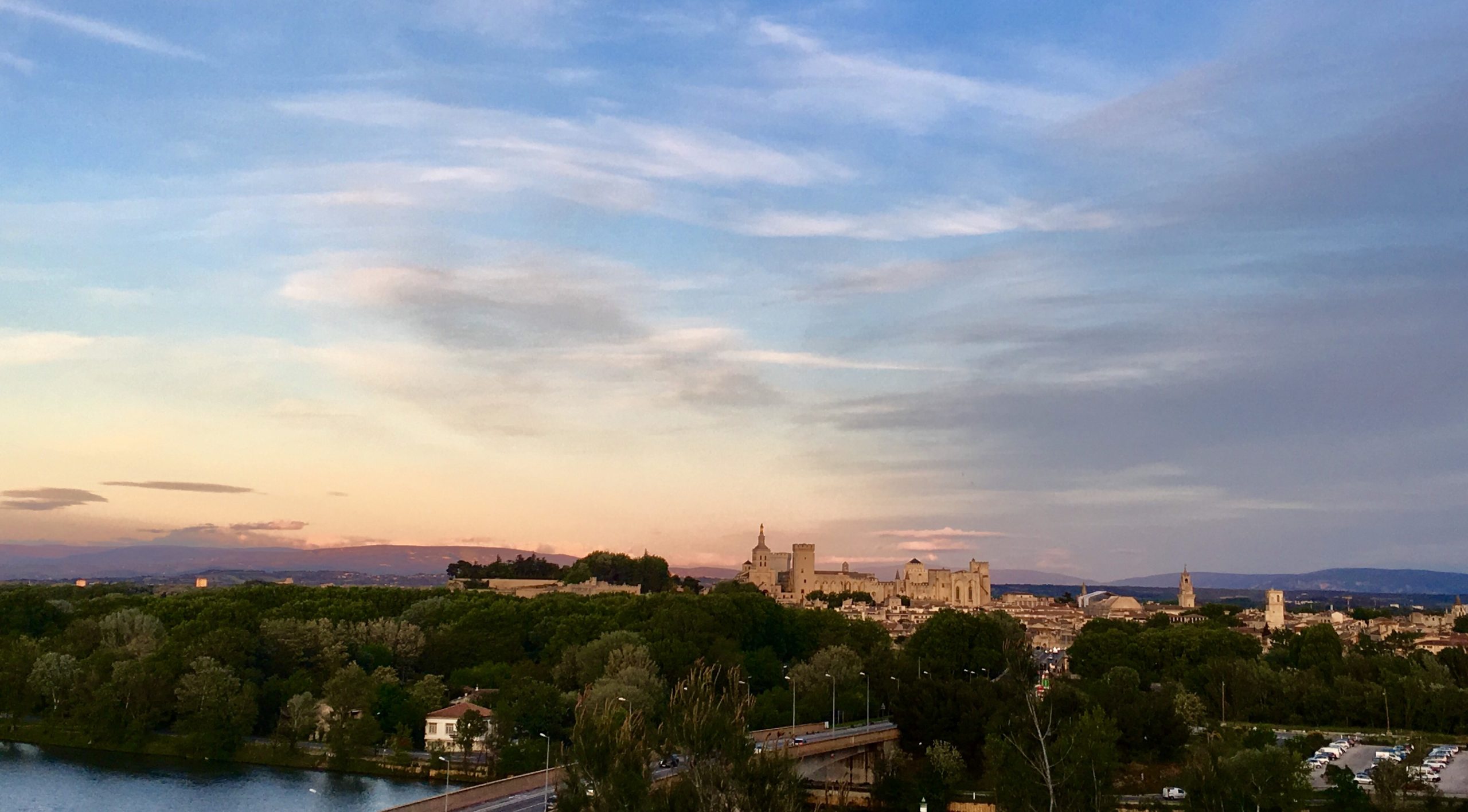 A Moment in Avignon

By Emilie MurphyJanuary 5, 2021Europe
No Comments

In the midst of ticking boxes on a tight itinerary, a traveler finds a simple moment of connection in the French countryside.

Across the Rhone from the centre ville of Avignon is a path that runs along the water and then winds inland. On one side of the river is the Pope’s Palace, all towering turrets and buttressed ceilings. On the other, overgrown grass and dashes of red wild poppies. When I walked the path in the early morning, my backpack bouncing with each step, I came across a fallow field and a pig penned in by wire.

I had, at this point, been traveling alone for a week. My first stop had been two nights home in Cruscades, a tiny town in the Languedoc. By the end of the month-long journey, I would have visited eleven cities across three countries, traveling between each by train, my backpack and small suitcase accompanying me along the way.

I had never traveled alone before or ever gone without seeing familiar faces for so long. I wasn’t nervous so much as unsure. The novelty would take me through the first few days, I knew, but then what? It was an adventure, yes, but it could also be a disaster. Still, I reminded myself, it was just one new experience in a year defined by newness: a new home across the Atlantic, a new career, a new set of friends, built from scratch.

A year before my solo journey, I had moved from New York to Paris. In just weeks I had felt comfortable in my new life, as if the grooves of my days had been set years back, as if I had always been living in the fifth arrondissement and meeting at bar-tabacs with friends. In high school, then college, I had struggled to find my place and my people. And then I was introduced to a group of strangers in a foreign place, and my life clicked.

I looked at the pig, his head bent towards the dirt as he snuffled around his pen. It was my second day in Avignon, a town defined by its medieval roots, yet seemingly outside time. The labyrinthine center of stone streets and a waterway edging the storefronts allowed me a glimpse of what-once-was, a history I felt I could disappear inside of. It was a new sensation, moving through spaces as a complete outsider, knowing that nobody knew me. There was nobody to perform for in any way, to feign for, to agree or argue with.

I knelt down and stuck a hand through the lines of wire separating me from the pig. He looked over, unimpressed, and continued on his route around the pen. I watched him, feeling a gentle glow of sun on my neck, the smell of spring coating my throat. On either side were trees, the path snaking between the pig pen and a squat stone cottage into another grove. I knew, because I had planned this walk before I set out, that the path would lead back to the river and give me a view of Avignon from the other side. I knew I would see the Pont d’Avignon and the curve of the river around the land and the golden statue of Notre Dame rising atop the line of trees and jumble of buildings.

I would get there soon. But, for just a moment, I wanted to stay listening to the wind rustle leaves and the pig sniffing the ground, my hands holding tight to the straps of my backpack. I would be leaving the next day, heading east to the next town. Nothing would be constant, and the new would strike me each time I stepped off the train, the slight accent variation throughout France, the rocky Monegasque terrain and the unfamiliar lilt of Italian, feeling my way through gratzi and ciao, the words exercising my tongue. But here was a stone cottage, a fallow field. Here was a quiet moment in the middle of a town in France where I felt more grounded in myself than I could ever remember. As if this was exactly where I was supposed to be, a moment handpicked for me from the infinite grove of milliseconds and passing time.

Nobody was there to share this with me. There would be nobody to call and tell because there would be nobody who would understand. It didn’t matter, I knew. This was a moment for me. I tilted my head up and watched the lazy drift of clouds. In a time when we share our most personal trials with the world, where we document and upload our intimate moments, where we have friends we’ve never met in-person, here was a memory to cherish outside of it all. There was a field in France where I was alone, where I was given the opportunity for a private experience with no pressure to share, dissect, no thought about how to angle my face in the photo to obscure my double chin or witty caption that would get me likes but do nothing to capture the real essence of it all. There I was.

I reached my hand through the wire once more, and the pig came towards me, sniffing my fingers with his flat snout. I wanted to reach deeper, to touch his face, his prickly pink skin, but I didn’t. I held still as he considered me. He nudged my hand lightly, expecting food perhaps. When he realized I had nothing to offer, he moved away, nose bent back towards the ground, and I laughed out loud with no one around to hear it.

I thought of the day ahead, considered where I would have lunch, the walk back up a small hill to the hostel where I would stay the night. I knew the next morning I would be on a train again, headed east to Provence, moving once more. It would all happen in time; the days would unfold how I had planned them, the trains would depart stations, wheels grinding along tracks, tours would start and stop, buildings would rise against skylines as I approached, and people would greet me as I lay my bags down for the night. But in that moment, there was stillness. I stayed unmoving as the seconds passed as if I could soak the calm into my bones. There I was, with nowhere else to be.

Emilie Murphy is a freelance writer based in Brooklyn, NY. She has published work in a variety of online and print publications, including Suitcase Magazine, Dance Magazine, Entropy, and Lonely Planet, among others.