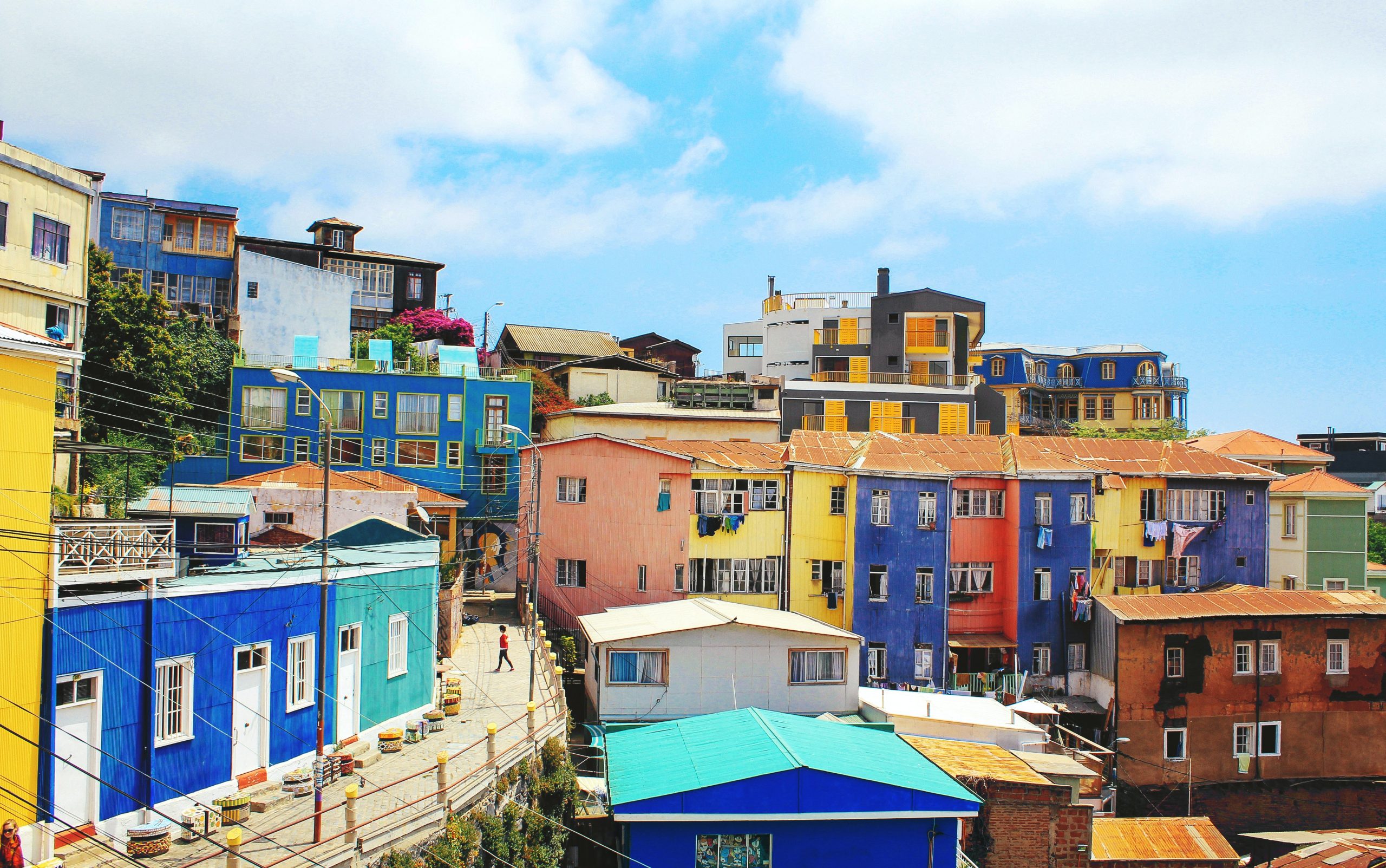 A Book for a Book

A mugging in the colorful port town of Valparaíso, Chile, helps a traveler understand the country’s troubled past and turbulent present.

When I was in Chile, I got mugged.

It was decidedly undramatic, less Butch Cassidy robbing the Union Pacific train, more the sort of story that would feature on the “cringe” page of a teen magazine (and then I fell over in front of my crush). The thieves made off with my diary and a bottle of sunscreen. To say that I was distraught is a gross understatement.

It was mid-afternoon. I’d just enjoyed fresh ceviche from a local market and exchanged life stories with the genial fishmonger. She was from Valparaíso, often considered to be Chile’s city of intellect (home to no fewer than four universities). The last few months had been turbulent, she told me. Today the streets were quiet. The only noise came from the sea lions down on the waterfront who honked and writhed inelegantly, their slick bodies like obese slugs vying for space on the broken pier. The air was slightly acrid though, catching incongruously in the back of my throat; lingering tear gas from the protests. Anti-austerity protests had broken out as a reaction to increased Metro fares in Chile, but the root of the problem went much deeper. Chile has one of the greatest wealth disparities of any country in the world, but the president, Sebastián Piñera, is a billionaire.

The city was color and creativity. It was political statements, it was a nymph painted on a skyscraper. It was a rickety cable-car that transported you from the wealthy banking district to a plaza of mosaic hearts up in the cerros (hills). No-one was disrespectful enough to vandalize the vibrant, under-the-sea murals of tangled eels, but government buildings and shop fronts downtown bore angry black lettering, shouting in capital letters, ACAB (the universal “All Cops Are Bastards”), FUERA PIRAÑA (“get out, piranha,” a play on words on their president, Piñera), and PACO CULIAO (literally speaking, “motherfucking cops”’). There was broken glass, and on one corner a dead cat, swarming with flies, mouth half-open in a grimace.

That morning I’d feasted my eyes on the greatest exhibition of street art imaginable. I’d visited the old prison, now remodeled as a vibrant cultural center. Just 20 years previously, prisoners had been tortured here as part of Pinochet’s authoritarian dictatorship; now the prison housed indigenous art and vegan cookery classes. I’d chatted to the elderly owner of a kiosk-cum-bookstore, small talk about the weather and British football clubs. “I support Liverpool,” he told me conspiratorially. I’d ordered coffee and written in my diary, flowery, over-exaggerated descriptions of the kaleidoscopic city I was in. In the three months I’d now spent travelling through Chile and Argentina I’d written in my diary daily, determined to record every second. Ignoring the persistent tickle in my throat, the city felt liberal and harmonious. Nothing bad happens when the sun is shining.

The sun on my face coaxed out new freckles as I explored the city-sized gallery. I was on top of the world. Skipping down the street, harem pants and blonde hair: I couldn’t have looked more gringa if I’d tried.

“Be careful,” the fishmonger told me. “Valparaíso, it’s a hot mess. It’s educated, scruffy, rich, and poor. It’s the first place in Chile to take a cause and the last place to quit it.”

The Valparaísan poet Pablo Neruda summed it up when he wrote “Valparaíso, what an absurdity you are […] a head of dishevelled hills that you never finish combing.”

The mugging happened very fast. I heard the soft thud of footsteps as I was pushed to the ground from behind. One boy snatched my backpack whilst the other pinned me down. The third grabbed at my earring, an impractically big hoop, and I prayed the skin wouldn’t rip and cried out in pain. They couldn’t have been more than 13-years-old.

“How embarrassing,” was my first thought. “Mugged by children half my age.”

They were gone as quickly as they’d arrived, and I was left to shout every obscenity that I could muster in Spanish and clean the blood from my knees, cursing my slow reactions.

I decided to give chase. It was futile; there were at least 15 narrow streets splitting off from the plaza. The topography of Valparaíso is as chaotic and confusing as the eclectic mix of people who live there, hundreds of hills rising and falling like bubble wrap, labyrinthian alleys bisecting and intersecting in cobbled warrens.

“Hey, England!” shouted an elderly man. “Why is your head in the trash?” I’d been shamelessly rifling through bins for the past hour.

It was the shopkeeper that I’d met that morning, and I was partially immersed in the skip outside his kiosk.

“Robbed?” he fumed. “Valparaíso is the most beautiful city in the world, but it has its problems. I’ll call the police.”

“No,” I said hastily. “It’s nothing valuable, just a diary.” I was acutely aware that the police were extremely unpopular. Statues of conquistadores in the plazas around Valparaíso and Santiago wore eyepatches now, symbolic of the hundreds of protestors that had lost one or both eyes during the demonstrations over the last few months.

Neruda’s poetry. He opened it at “Ode to Valparaíso” and read aloud: “The solid houses of the bankers trembled like injured whales, while above, the houses of the poor jumped into the void like imprisoned birds.”

The line was about the earthquakes that regularly wreak havoc on the city, but the undertones of social inequality were there, too. A city of contrasts.

He called the police in spite of my protests, and the van arrived in minutes. I was bundled into the caged boot like a dog in a pound, trying to explain that it was all so stupid, that all that had been taken was a scruffy red notebook of barely legible scribbles. Yes, it was tales of travel romances and Patagonian peaks and the most wonderful, fascinating people from all walks of life, but really, it was nothing; it was worthless waffle. My eyes watered, and I wondered why these stony-faced carabineros with truncheons dangling from their waistbands had nothing better to do than chase after a diary. Had the events of the last few months left them bruising for a fight, whatever the provocation?

Three boys were walking down the street, trying to look nonchalant but throwing nervous glances over their shoulders.

“Is this them?” barked an officer.

“I, I don’t…” It was them, I was sure it was them. They looked so pitiful and childlike, though the rucksack was nowhere in sight. Before I had time to form a sentence, the officers had leapt from the van shouting, the youngest boy started crying, showing a gap-toothed mouth, adult teeth yet to grow. They began to strip-search the oldest boy, as if a notebook could be hidden on his skinny frame.

Such a bungled attempt, I thought, stealing a bag full of indecipherable scribbles in an unknown tongue. Where was the expensive camera, the latest iPhone, the wallet full of cash? I am unassuming-looking: short, round-faced, trusting. I smile too much. I have been mugged several times. Each perpetrator must have been bitterly disappointed by their paltry loot.

As I returned to the hostel, I heard a shout. A man chased two boys down the street. They lost him easily, diving into the labyrinthian back alleys.

“Where did they go?” the man asked me, panting. “I’ve been mugged.” I handed him the book of poetry.

It takes me weeks to write again, a period of mourning for the words that I lost. I leave Valparaíso and journey up to the vast Atacama Desert: Copiapó, Pan de Azúcar, Antofagasta, a dry and starkly beautiful wasteland of slag heaps and bright, highlighter-yellow sand that meets the cerulean blue of the Pacific. Here in the desert, with no buildings to graffiti, stones have been used to autograph the landscape. Right next to one which spells out “Luis y Delia 8/1/20” is another which says “ACAB.” Chile is in crisis, a country so unequal that out of desperation people will risk their liberty, their sight, their lives, for change.

In Arica, the northernmost city in the country, I buy a little red notebook, identical to the one that I lost. Arica is dusty, flat, full of cubic, uniform houses and windswept, gray beaches like thick cement. It couldn’t be more different to the paint-palette port town that I left behind in the south. As I finally put pen to paper again, I think of the last line of Neruda’s “Ode to Valparaíso.”

“Tattooed on your southern chest are struggle, hope, solidarity and joy, like anchors that withstand the waves of the earth.”

Anna is a travel writer currently based in Lyon, France. She's an avid hiker and outdoor adventurer, and her work has appeared in SUITCASE Magazine, Telegraph Travel, Active Traveller, and The Great Outdoors, among others.