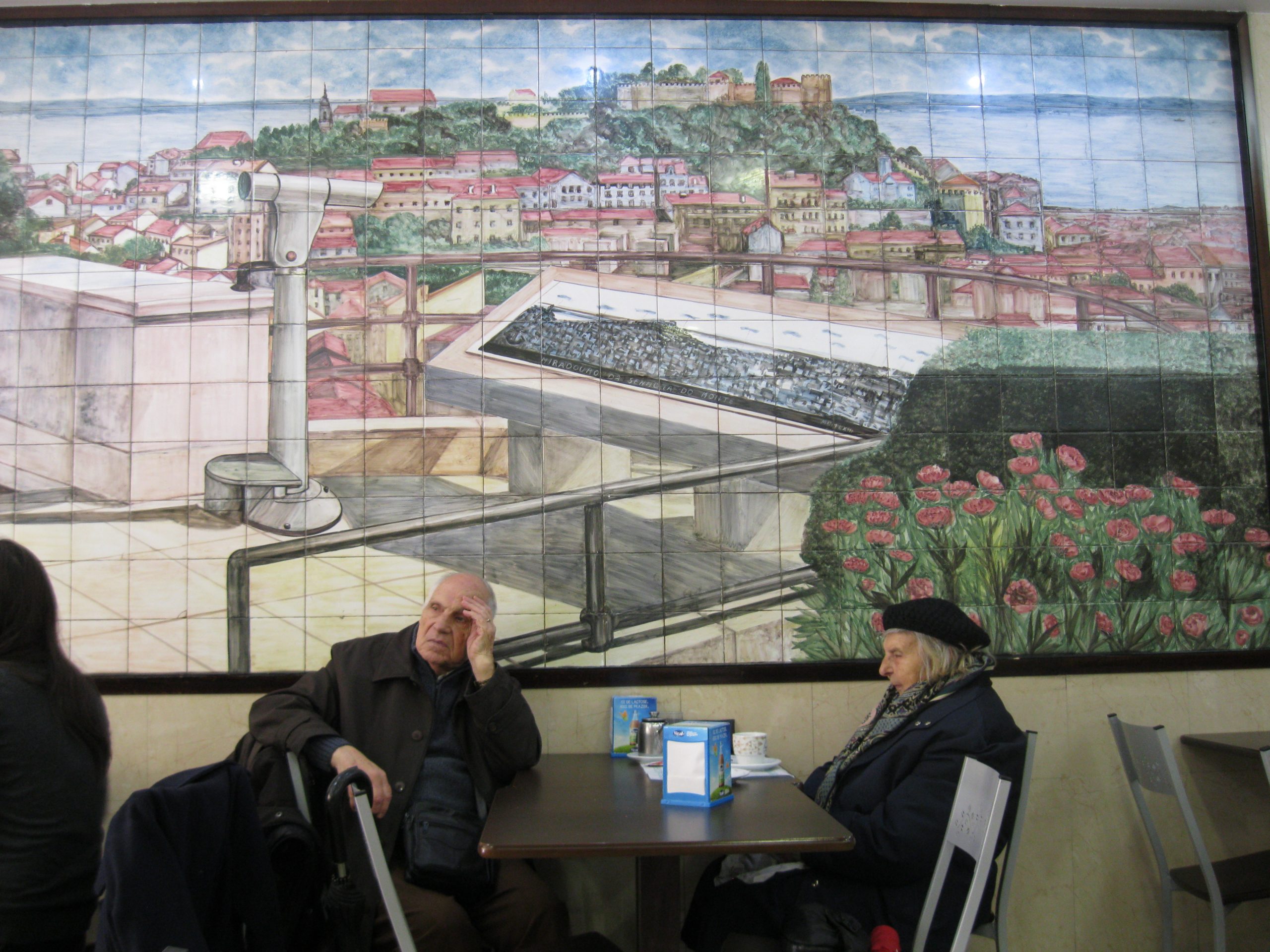 Lisbon and the Geography of Loss and Longing

By Lisa MorrowMarch 1, 2021Europe
No Comments

A writer and sociologist gives a richly painted portrait of the multiplicity of characters who make up Portugal’s largest city.

On the street where I first live in Graça, the cobblestone pavement is equal parts dog shit and cigarette butts. Except for on the coldest days, the men who frequent the corner bar like to stand in front of the huge recycling bins, smoking. Some days one of them puts a cassette of Fado music into the deck of their almost-wrecked car. As the notes plaintively reach a crescendo, hands lower burning fags to their sides. The men start to slowly sway and whisper sing the words as reverently as if saying a prayer. All throughout their eyes remain resolutely fixed on passers-by, unwelcoming as stone. When I walk past them every day, I get the same look. Clearly I’m an intruder on their turf.

Old Portuguese ladies totter under the weight of ancient moulting fur coats worn in an attempt to keep out the cold. The narrow pavements and deep gutters form barriers they’re unable to forge alone. They cling to elderly, grown-up daughters whose faces never held any former prettiness to trace, only wisps of moustache hairs improperly removed. Once inside, mother, granny, mom, avó or mãe, sits motionless at the small windows framed in sandstone sills, dirtied and worn by the city’s decay. Not one returns my greetings or even relinquishes the faintest of begrudging smiles.

Mouraria wraps itself around the base of Graça, a moat of multicultural opportunity and despair. High up the side of a tile-covered apartment block, a crocheted bed cover, hooked together in the colors of Africa, hangs out to dry over a narrow, wrought iron balcony. Far below these remains of a now forgotten rich and splendid past, old men limp along, each hefting one heavy shoe fitted with an extra thick sole, a burdensome souvenir handed out free with polio. The man with no front teeth who asks, in carefully articulated Portuguese, German, French, or English, for a spare coin. Passing them in a whirl of Afro hair, short skirt, and brilliant makeup, a woman wearing clumpy platform shoes talks happily to herself. Suddenly, another woman blocks her from view. She has such broad thighs, a complete life story has been tattooed across the backs of both her legs. There are so many languages to choose from here, but I don’t have the right vocabulary.

The smell of curry floats on the breeze, a shout of recognition and welcome accompanies the hsst and fizz of a bottle of beer being opened at a café frequented by men in dashiki and assorted colourful attire. They are uniformly cold and miserable, ill-prepared for the existence of any season other than stinking hot. Chinese-owned shops sell all things plastic, while the Bangladeshi are good for mobile phones. Up a typically steep Lisbon side street and around a corner, slightly built dark-skinned men spill out through the basement doors of a dilapidated warehouse. Built deep into the bedrock of the city, it houses a temporary mosque, their tribute to home.

These are the invisibles, hidden behind menus held out to tempt sightseers passing through the lane ways between Rossio and Baixa in Lisbon’s tourist center. All the streets are named after trades and occupations, but these days the floral scrolls and elaborate tilework on Shoe Street frame the velvet-draped entry to a peep show. Directly opposite, a pair of grey-haired American tourists in matching safari vests and white ankle socks peer at the handwritten menu of a long-standing traditional Portuguese family-run restaurant. Groups of timid Korean mothers, aunties and spinsters, neatly attired in cotton hats and elbow-length arm covers to keep them cool in the sun, pull back at the sight of a junkie. He ecstatically offers drugs while ducking and swaying as he tries unsuccessfully to control his eyes, which slowly slide sideways off his face, one at a time. His spiel is drowned out by the revving of tuk tuks, not yet electrified, driven by locals desperate to pimp their city rides. Displaced Africans gather opposite a famous ginjinha bar, one single item laid out for sale in front of them, protected against the dusty cobblestones by a piece of battered cardboard rescued from recycling. At the base of the blackened church walls, a beggar waits without illusion, hoping for mercy. This place is not truly home to any of us, yet here in the tourist center of the city, I am somewhat more at ease. Being surrounded by others equally uncertain as me helps.

Once I’m underground in the metro system, a sense of order returns. Colored lines mark the routes in a netherworld that is simultaneously nowhere in particular and anywhere in the world. Tunnels full of endless crossovers, alleys, and shops lead me safely to already known destinations and make it easy for me to find my way back from the unknown.

The carriages are full of people. Tourists with four-wheel cases tightly clutch maps in hot, airplane sweaty hands and worriedly scan the transport plan, afraid they’ll miss their stop. Recently arrived families from India and Nepal, some with mothers in saris holding spindly armed children, converse in weary tones. Talkative women from Cabo Verde, with artificial hair that throws off static from carefully cornrowed or high set pompadours, play with their children and text their friends. Portuguese university students in top hats, bow ties, and capes in a style much older than the Harry Potter series that made them famous travel in packs and chat nonstop, unlike the ageless Chinese students who sit silently and alone, always only ever looking down.

A man comes through playing a piano accordion, badly. His tiny Chihuahua stands shivering on the bellows, collective pity earning him coins. Everyone continues to babble and gossip, but the level is muted. No one is disturbed by the noise until the blind men pass through. Each carries a cane and a can, and taps out a rhythm to accompany their call for donations. Some bang their guide sticks loudly on the ground with enough repetition to garner attention, while others make sounds that annoy. One man, skinny in droopy blue jeans and an empty daypack on his back, plays a complicated riff with a metal spoon. His body hums with aggressive energy, and I know without having to look anymore that there’s only the scarred aftermath of messy stitching in place of his eyes.

Around me all the outsiders in the carriage turn away in sudden shock and fear. This isn’t the Lisbon they were expecting to see. Nor I.

Lisa Morrow is an Australian-born sociologist and writer who resided in Lisbon for nearly four years and currently lives in Istanbul, Turkey. She writes a blog about life in Istanbul, has authored three books on Turkey, and her work has appeared in The Smart Set, Meanjin, BBC Travel, and elsewhere.