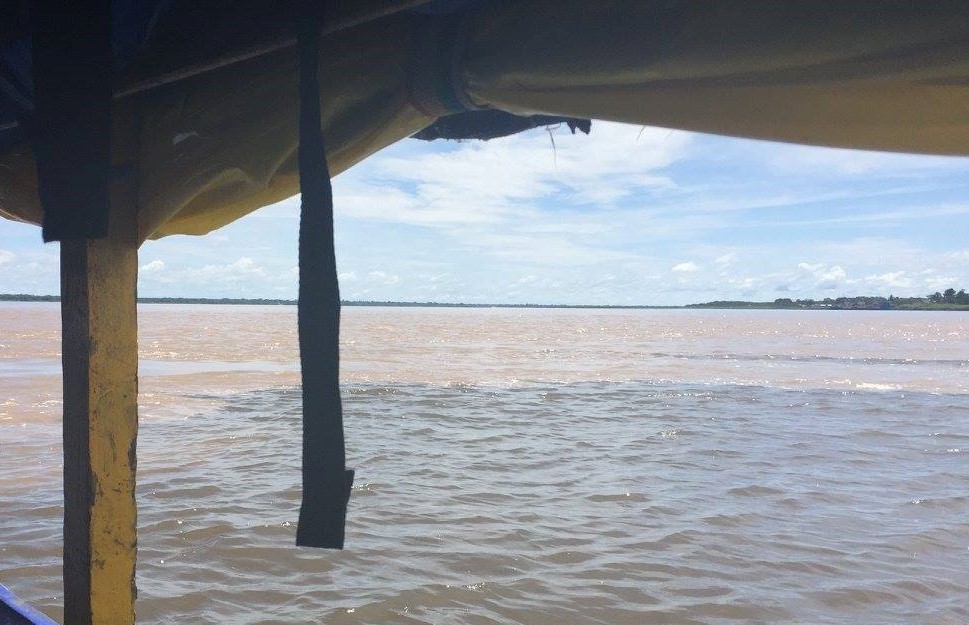 Stranded in the Peruvian Amazon

A traveler in Peru finds more adventure than she bargained for when her tour boat’s engine unexpectedly dies in the middle of the Amazon.

“There’s the boat, I see it now!” our guide calmly called out. The 12 of us were swimming in sweat, having just completed a whirlwind 72-hour tour of the Peruvian Amazon. Backpacks on our backs and water bottles clanging from the side, we hustled to follow him to our transport home.

The motorized boat impatiently rocked from side to side as we scrambled on, the sound of the murky brown water gently slapping the side of the low-riding vehicle. I breathed a sigh of relief when I finally heard the guttural roar of life from the motor—I had the earliest flight back to Lima to catch that evening.

We whizzed past leafy trees hulking over the muddy shores, too far from either side to make out anything beyond the overlapping branches. I finally started to relax after our late start this morning, when I felt the humming of the boat come to a standstill.

A deafening silence took over the boat as the twelve of us looked nervously towards the two “captains.” They murmured softly to each other, their backs to us, as the tension grew thick among the passengers.

The younger man swiveled around and peered under our seats, which ran along the sides of the boat. He straightened up and glanced back at the older man, quickly shaking his head.

I knew what was coming. Even before the man on my right spoke up (“¿Que paso?”), I felt the answer in my knuckles, clenched nervously to the wooden seat.

We were out of gas, and there was no extra tank onboard.

I made a phone gesture with my pinkie and my thumb protruding. “¿No tienen radios?” Lips pursed and eyes peering off into the distance, looking for assistance that wasn’t there, the younger man didn’t even bother to answer me.

Half the passengers had pulled out their cell phones by this point, but the signals were nonexistent in the middle of the river where we were. One young boy had been playing on his iPad, swiping furiously at fruit with a finger sword, when his father swiped it out of his hands. He scolded him for being a distraction, but I knew the real reason was to preserve the battery in case we needed it later on.

As one guide held up his phone, concentrating on finding a signal from one side of the boat to the other, I felt the shroud of darkness creeping up. The sun was starting to duck behind the silhouette of trees in the distance, and the mosquitos were emerging from their afternoon siestas, a pause from the oppressive heat and humidity of the rainforest.

A pitter-patter of light rain pulled us out of our stupor, and a few of the men started to unravel the plastic tarp that had been stored in coils to protect us from the incoming rainstorm. I tried not to let thoughts of my flight in just a few short hours cloud my mind as one of the mothers yanked a fluorescent orange life vest over her daughter’s head, rattling off in rapid Spanish about how one could “never be prepared enough” and “who knew, except God, exactly how long” we’d be out there for.

Huddled in the suffocating darkness, with the rain pounding down on our boat and mosquitoes nipping at our ankles, I couldn’t stop replaying scenes from Cast Away and Anaconda over and over in my head. A tap on my elbow woke me from my reverie. One of the passengers I had lunch with remembered that I had been desperately trying to push the group to stay on schedule because of my flight, and she offered to call the airline for me.

I smiled gratefully, handing her my soggy, folded up itinerary, grasping onto what little hope I had left. That optimism was quickly squashed—the customer service attendant was less than sympathetic to our plight and promptly informed her that until the plane leaves without me on it, I couldn’t cancel or reschedule anything.

The older guide finally reached the national Peruvian emergency number and asked for a way to get in touch with the Coast Guard services. They were equally unhelpful—they didn’t “keep numbers like that on file.”

The younger guide’s voice grew louder, and I realized he’d finally reached a contact. Thank goodness for local people with local friends, I thought. He hung up with a satisfied nod, reassuring our group that his friend was on the way with a tank of gas, and though I saw eyes light up around the boat with anticipation, I dared not to give in to that promise just yet.

The two friends at the opposite end of the boat from me shifted in their seats, and I fingered my backpack strap, trying to recall what snacks I had left, stuffed in the bottom of my bag under the insect repellent and dirty socks. The mother clutched her daughter as if any second, we were bound to start sinking from an empty gas tank.

Then the most beautiful sound I could have imagined broke through the tense quiet of the night—the roar of a motorboat accompanied by the flash of a powerful beam of light.

It was as if we had been stranded there, bobbing along in the still waters, for months instead of two hours. Cheers broke out and travel companions hugged each other tightly. The guides threw open the plastic tarps, letting in the full force of the light, and my heart soared with an enthusiasm I never knew was possible for the sight of another boat.

As the man navigated the rescue boat nearer to ours, he shouted across the water that it took him longer than expected to find us due to the lack of distinguishing markers along the river and pitch blackness. He estimated that he’d passed our boat at least twice.

He jumped onboard and made his way to the gas tank, the other passengers grinning and chatting freely as they watched him fill up the empty container. Our guides moved to start the engine the second he finished, and in another unexpected turn of events, there was no response—our engine had completely died, gas or no gas.

The three of them quickly banded together as we all paused our joyous celebrations, certain that surely, he had come prepared with a Plan B. Two of the guides disappeared onto the rescue boat, and a moment later, a thick rope flew out and into the hands of the third guide. They quickly worked to tie the two boats together with elaborate knots and tight pulls.

The journey back to shore from there was smooth and oddly relaxing, although I knew everyone else was thinking the same thing I was by the time we saw the dock—get me off of here.

Annie Elle works in international education and has lived and worked abroad for the last 10 years. Originally from Los Angeles, she has traveled to over 90 countries and continues to seek out new foods to taste and extreme sports to try.