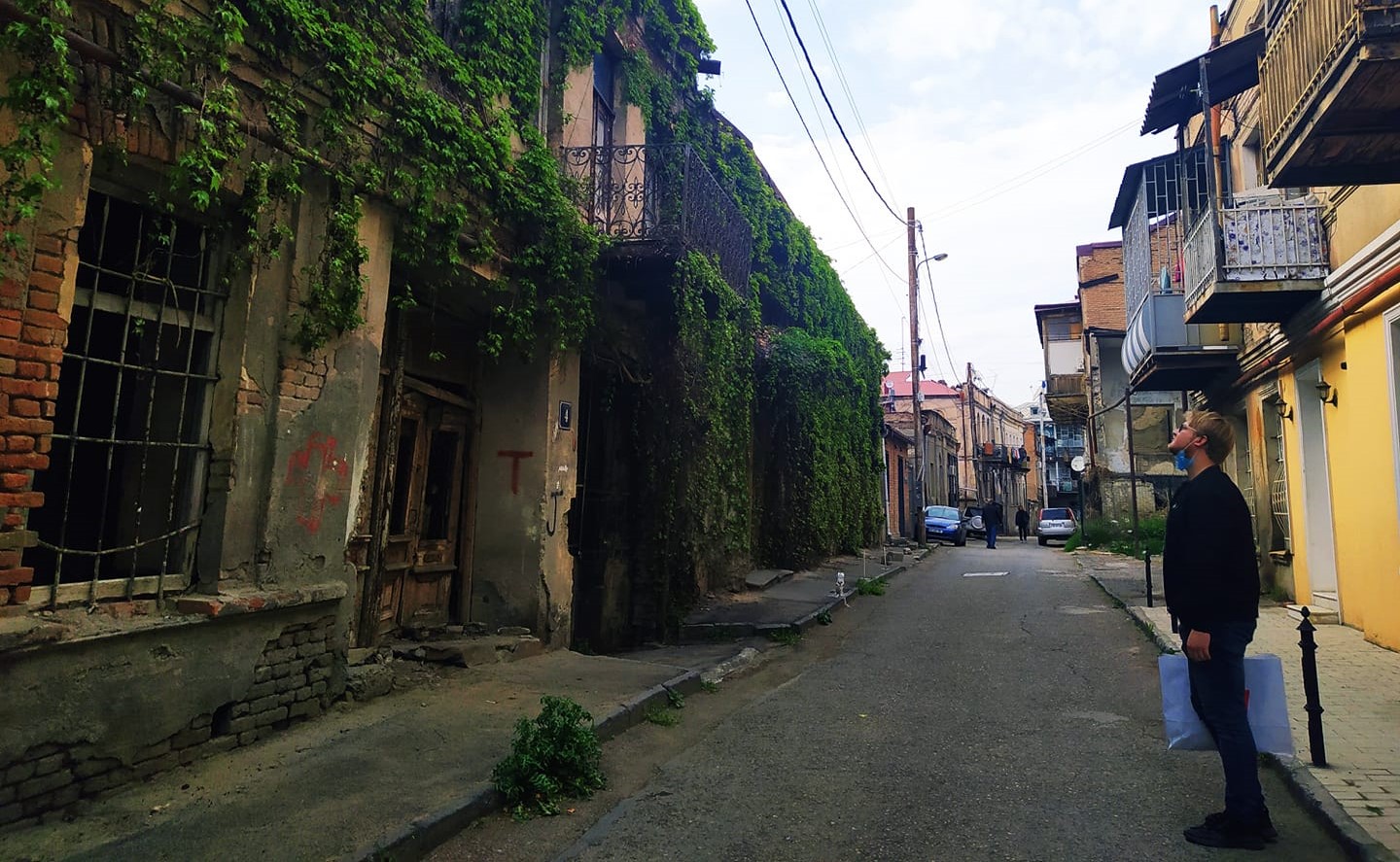 A Death in the Building

As the death of a tenant sparks a sullen commotion in his apartment building, a traveler wanders around the streets and alleyways of Tbilisi, Georgia’s historic capital city.

They started showing up the day after we moved in.

At first, there were maybe a dozen of them. The energy was sullen, like people resigned to standing in a long queue at a bank or train station.

They ignored me as I walked by, through the carpark of our apartment building — the only modern building on the street — and out into the winding alleys of Avlabari.

Some tourists come into this ancient Armenian part of Tbilisi to see the towering Holy Trinity Cathedral, which is lit up at night and visible from many of the hotels in the old town. But most of the district is a quiet labyrinth. Streets weave into alleyways which narrow to pathways, lined with wooden buildings in various stages of collapse, as if an earthquake had recently hit.

The delicious disrepair does not attract many visitors, so locals go about their business undisturbed. Open-air welding (no goggles and certainly no mask required) seems to be a popular hobby, as is tinkering with cars in similar shape to the buildings they are parked in front of. Aside from the odd Spar or chain pharmacy, most shops here are sprawling, half-indoor half-outdoor affairs, produce piled in front of the doors next to gallon-sized plastic jugs of homemade wine.

Wandering in a trance through one alleyway after another, the yapping of a dog brought me immediately to my senses. A light brown beast appeared behind me, leaping at my legs, teeth bared. I turned heel and attempted to walk away before three others charged at me from all directions, barking aggressively. They chased me out of their territory, and then, having neutralized the threat from the interloper, fell back into the twisted lanes from whence they came.

I more or less overcame a fear of dogs as a child but have never felt at ease among strays, of which Tbilisi has many. (My girlfriend, on the other hand, approaches them like old friends and buys them snacks from the nearby shops.) Seeking the safety of fellow humans, I set out in search of busier streets. The first person I saw was a young girl, dressed in pink, standing on a small scooter, watching me with bland curiosity. Seeing her composure despite the recent canine commotion, I felt silly and ashamed of my still racing heart and shaking hands.

The Mtkvari River finally showed itself, hidden behind a raging highway, carrying water from Turkey across the entirety of Georgia and out into neighboring Azerbaijan. I took shelter in the garden of a small church that stands on a hill above the bank and gazed at the old town in the distance. A white hot-air balloon floated over the city as the blue sky collided with the rusted brown of the old fort on the slopes above the town. I headed home.

Cars now lined the ordinarily quiet street leading to our apartment building. Many vehicles looked expensive, the families getting out of them sharply, though still informally, dressed. The adults serious, the kids giddy and wild with excitement. As the grown-ups stood together in silent clusters in the now overflowing carpark, the kids ran around the building, yelling and giggling, impervious to the gloom of their elders, and free to roam about as they pleased.

As I entered the building, a young boy leaped into the elevator right behind me, pressed the button for each and every single floor, and then hopped out and ran away cackling. I took the stairs. The fourth floor, just below ours, was packed with people, blocking the staircase and taking up every square foot of space. They paid me no mind as I squeezed by.

That evening, my girlfriend and I sat on the balcony, looking at the small, tin-roofed shacks that surrounded our building. Roosters and dogs interacted in a symphony beyond our understanding. As night fell, the cats became active, making a din on the metal rooftops and screeching with demonic glee. Parties were taking place in the bungalows below, and the drunken shouts became louder and more aggressive as the night wore on. The great dome of the cathedral was illuminated, and the moist air smelled of cut grass and charred meat.

The next morning our landlord knocked on the door, asking to take the baby crib that we had been using as a makeshift laundry basket. She apologized for the goings on and explained that a resident of the building had died. “I am sorry for the inconvenience of the crying,” she said, referring to the distant wailing that emanated from the floor below.  “The funeral will be tomorrow, and then they will leave.”