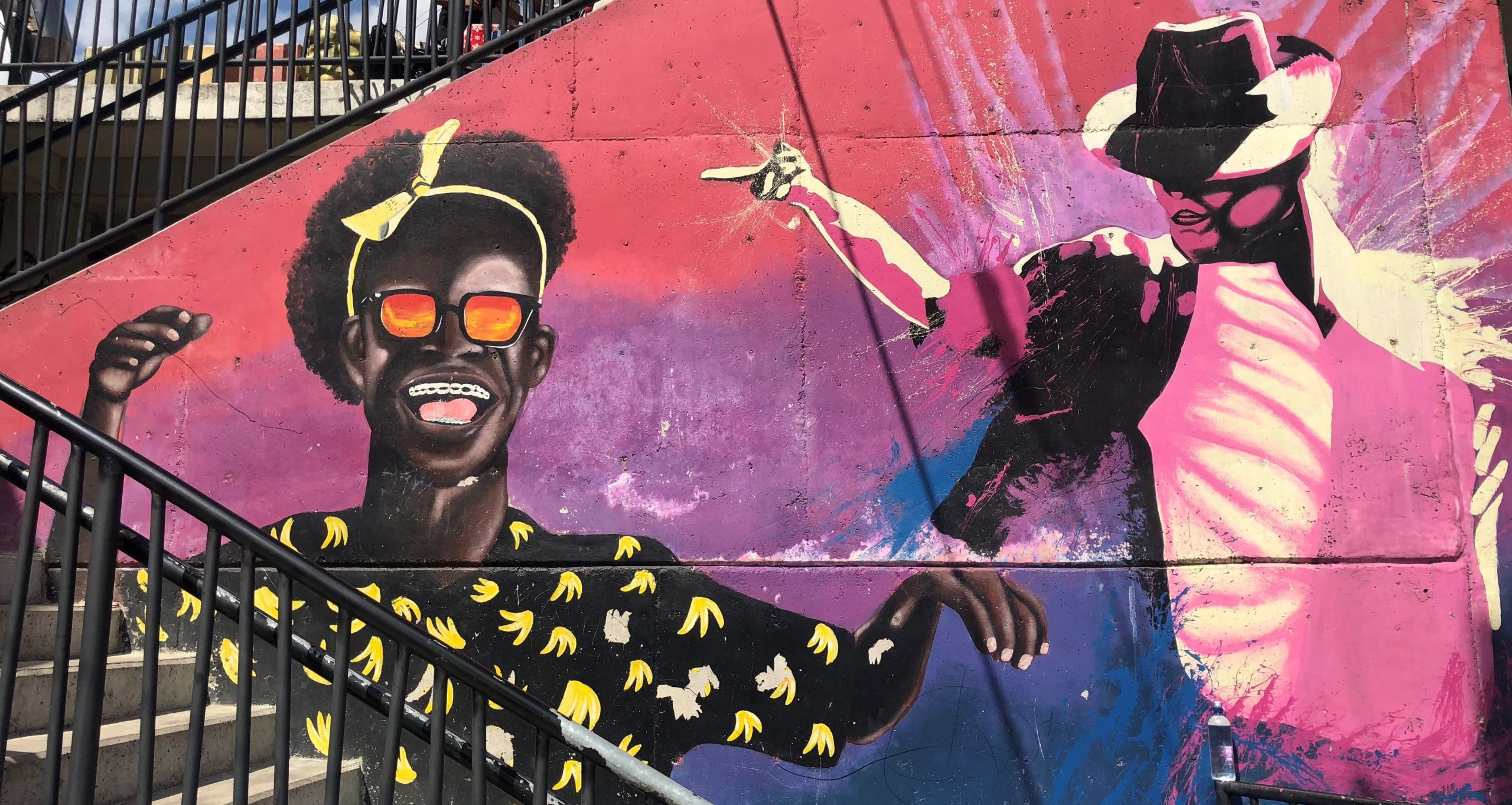 The street art of Medellín’s District 13 offers insight into the troubled past and hopeful future of Columbia’s most notorious city.

Women stood in doorways offering a smile. Children darted across the inclined road, engaged in what appeared to be a game of tag. Laundry fluttered on clotheslines and across balconies, like colorful flags waving hello. Peering down alleyways, intricate street art scrawled across the cement walls, their designs radiating the vibrancy of the neighborhood itself. Laughter, quick-paced conversations, and music wafted from open windows. Energy pulsed in all directions.

And yet, as I meandered uphill, Pablo recounted the events of October 16, 2002, when more than a thousand soldiers marched up this very street. Like green ants, they moved in rank, searching for the guerillas who’d come to run these hillsides. The air filled with the whirling of helicopter blades, and the explosion of bullets sprayed from their mounted guns. Metal pierced metal, ricocheting off homes and down side streets, striking whatever lay in their path, be it buildings or people, innocent or guilty. One solitary tank took up the rear, roaring its support of Operation Orion. Dozens died and hundreds were injured in this government-led, four-day attack on the Revolutionary Armed Forces of Colombia.

With the neighborhood now so filled with life, I struggled to imagine this scene and the fact that drugs, gangs, and guerillas had at one point in time made District 13 the most dangerous neighborhood in the world. Its metamorphosis from discord to harmony, from fear to stability, seemed impossible, if not unfathomable. Yet, as I’d come to understand, that was the magic of not just this neighborhood, but of Medellín at large. A city once afflicted with chaos and bloodshed now stood as an urban epicenter filled with industry, entrepreneurship, art, and soul; and from Comuna 13 to San Javier, I would spend the day seeing, feeling, and experiencing this transformation first-hand, the resilient way in which Colombians have utilized their past to spark change, support peace, and move forward.

The FARC had initially taken over the city’s hillsides looking for new sources of revenue after the collapse of the USSR. But following Operation Orion, they fled further afield, leaving District 13 abandoned in its reconstruction. Without either guerilla or government support, the residents had to shoulder the responsibility of revitalization themselves. Utilizing individual talents and resources, everyone contributed, from painting to babysitting, cooking to mixing cement. Through their communal efforts, the rubble slowly dissipated and, alongside this physical rebuild, came a strategic cultural shift. To provide the next generation an alternative to violence and drugs, the inhabitants invested in youth culture, one piece of which was the creation of street art, which now covers almost every available wall.

These murals not only bring life to District 13, but they also beautify a once turmoiled neighborhood by recounting the very past that plagued it. At the top of one recently built escalator sits a work created by Chota 13 that hauntingly depicts the events of Operation Orion, both before, during, and after. A silvery-gray face draws your immediate attention. Dilapidated houses, and dice reading 10, 16, 2002 surround one cheek, down which tears fall. The other half depicts color and life, with brightly painted houses, each of which has an open door, welcoming neighbors, and visitors. This cheek creased into a smile, the eye just above, illuminated, shining with what felt like promise.

Other street art highlights dance and music, two additional components of the youth culture that the community embraced. Their importance can not only be seen but heard and felt as hip-hop’s rhythms pulse through the streets, the heartbeat of the community itself. Native wildlife and local traditions coat still more walls, using brilliant hues and detailed patterns to highlight Colombian folklore.

Then there’s “Esperanza,” a mural entitled hope, visible almost immediately upon arrival at the district.  A woman pushes her hands together in prayer, her skin a combination of designs and images, including a lightbulb, human heart, and chess piece. A solitary dove flies above her shoulder. The colors, faces and animals encapsulate the neighborhood’s past, its efforts, and the future that awaits. As Pablo said, “These walls are telling the history they heard,” the images themselves along with the act of their creation embodying Medellín’s transformation.

From here, we ventured to San Javier, the westernmost metro station on Medellín’s B Line. Not entirely sure as to why a cableway stop proved worthy in a city filled with activities, we worked our way through the queue laid out. Paying our 70¢, a price waived when a rider donates 40 plastic bottles instead, we hopped onto available cars as their doors opened; many of us joined locals who’d boarded at earlier stations.

We traveled only one stop—to Juan XXIII—but wished to have ridden forever. Soaring high above, the journey provided an entirely new perspective of the city we’d just been within. Corrugated tin roofs, some of which were painted, shone in the afternoon sun. Brick buildings crawled up every hillside, their red walls perfectly complementing the green vegetation. The sheer size of Medellín became undeniable, the city’s downtown completely filling the valley.

Reaching the platform, we exited our cable car and meandered toward the lookout. At the railing, Pablo recounted yet another component of Medellín’s not-so-distant past, that of Escobar. One of the most powerful and vicious drug lords in history, he had reigned over the country at large, and Medellín in particular, for decades. The phrase “plata o plomo,” silver or lead, became Escobar’s slogan, ingraining the idea that problems were best solved with violence. Hired assassins murdered policemen in droves. Bombs exploded periodically and unexpectedly throughout the city. Civilians lived in fear, the idea of moving throughout the city, on foot, in a car, or on a bike, seemed impractical and deeply unsafe.

But here I stood, gazing out over a city that now boasted the only multi-pronged public transportation system in Colombia. While the conceptual seeds had first been planted in the 1980s, it wasn’t until 1995 that it opened, just two years after Escobar’s death. An above ground metro carries locals and visitors throughout Medellín; multiple cable cars move above the buildings, making the more remote, hillside districts accessible; buses run regularly, for commuters or those just out enjoying an afternoon.

Returning to lower elevation, Pablo’s words started to sink in. Just thirty years ago, this hillside would have been entirely inaccessible, not only logistically but also mentally, as anxiety fostered isolation and containment. Seated in a different yet similarly clean cable car, I could now not only count myself among the 1.2 million Medellín locals who use it daily but also as someone who was beginning to understand the value of the system itself. In a city where home felt like the only safe place, something as simple as a train symbolized so much more than transportation. It represented a larger movement, that from one phase of existence to another. It symbolized freedom from violence and oppression, freedom to move without fear, freedom to move forward in peace.

A transformation, however, not achieved by forgetting its past, as we were to see once again in San Antonio Plaza. Not far from the Antioquia Museum, this small square is home to two of Fernando Botero’s famous bronze sculptures. While you can find his work in some of the most iconic institutions around the world, and throughout Medellín, the juxtaposition of this duo caught my attention and, as I’d learn, spoke volumes about not only the artist but also the city.

Even from a distance I could see that both figures were birds, fat and cheerful, as was typical of Botero’s art. Initially, they appeared identical, like twins offering a greeting to those who entered the park. Yet upon closer inspection, one stood shiny and pristine, a perfect representation of the artist’s skills and signature style, while the other, positioned only a few feet away, boasted a massive hole in its stomach. At first unsure if the difference proved part of an artistic decision, Pablo detailed that this crater was instead a violent addition; that this gaping wound both figuratively and literally embodied the presence and influence of the FARC.

In the early nineties, it was this sculpture, and this one alone, that sat in the square, a donation from Botero to the city in which he lived. Visitors would amble by, en route elsewhere or to enjoy reprieve from the bustling city surrounding. And then, one June day, twenty-two pounds of explosives detonated just beneath its base. The blast irreparably damaged the bird, killed thirty innocent onlookers, and injured more than 200. The FARC ultimately claimed responsibility, their intent to send a message directly to the country’s Defense Minister, who happened to be Botero’s son.

This act rightfully angered Botero, an attack on his work, his family, and his city, and eventually he was asked to replace the damaged sculpture. He refused to repair it, instead donating an identical bird with the requirement that the other must also remain in San Antonio Plaza. They now stand side by side, the names of the bombing victims carved in the original. Like the murals of District 13 that beautify by recounting tragedy, these  serve as both a reminder and a request, as undeniable evidence of a city whose recent past cannot and will not prevent its people from moving forward.

The tour completed, the day winding down, we made our way back toward our hotel. On board the bus, weaving through afternoon rush hour, I considered all that Pablo had shown us. While perhaps not the most written about destinations or activities in Medellín, each had revealed a slice of the city’s spirit. Combined, they tell a story of perseverance, revitalization and of hope. I learned not just about where Medellín is or what Medellín houses. I felt the essence of the city and learned from those who not only survived the tribulations but actively chose to stay, to transform Medellín into all that it has become.