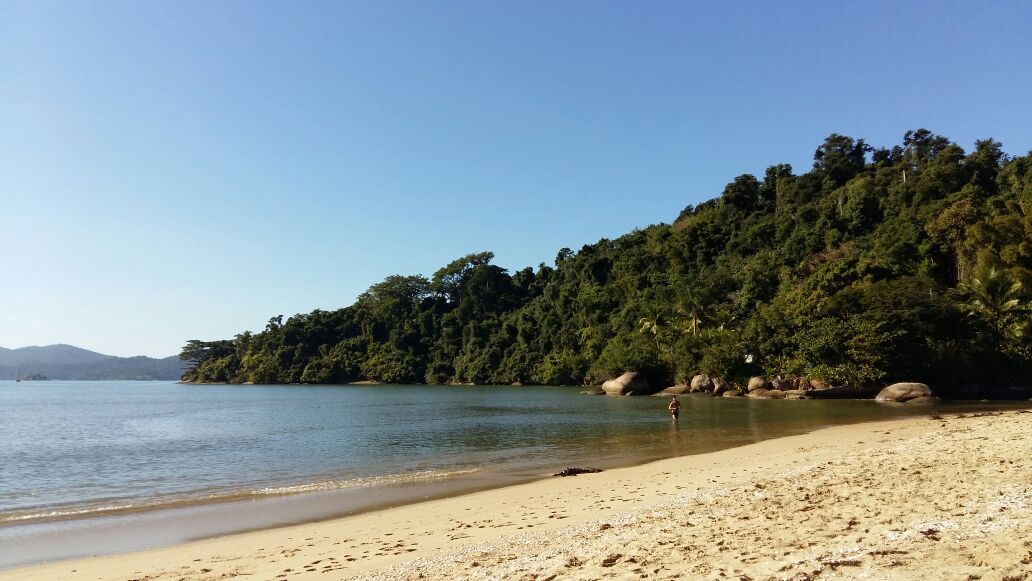 A lonesome traveler on a beach far from home wrestles with feelings of inadequacy when he is presented with the opportunity to become a hero. This story was chosen as a runner-up for our “Unexpected Adventures” travel writing competition.

I never learned her name, but always think of her as Nora. The name of the beach where I encountered her was, in translation, Nora Beach. Among the bronzed and golden bodies, laughing and shouting in the soothing sea or basking in the yellow heat, Nora impressed the way a fair-skinned European would walking through a colorful outdoor African marketplace.

With Nora were two women. One of the two women, an ancient-looking grandmother-type, wearing the flag of widowhood—a black shawl and black clothing—carried what seemed to be a tall bar stool, as well as towels and other beach stuff. The other woman, with an emaciated face and a body as thin as a child’s, supported Nora by the arm and her waist.

Through the sides of my sunglasses, I watched them struggle around the clusters of bodies scattered along the beach. With every step, Nora’s body jerked violently to the side. It seemed as if one of her legs was shorter than the other, or maybe it had something to do with her hip alignment. I don’t know. I’m not a doctor.

Tiny children emerged from their intense worlds of sandcastle construction and moat design, while bigger ones left off playing ball to stare at Nora, a strange girl-woman who could have been fifteen or fifty. Mothers and fathers, likewise, with the lack of subtlety common to their race, watched and commented upon the new arrivals.

Seemingly oblivious to this attention, the three women worked their way onward to their destination, a shady patch of sand next to my sunbed and me. I attempted to resume interest in my book, but the old woman’s voice addressing me from the side made me jump the way characters do in trashy novels.

“I’m sorry,” I said to her in an imitation of the phrases I’d rehearsed from the language manual. “I don’t speak Italian.”

The old woman smiled an old woman’s kind and understanding smile, clasped her hands together as though in prayer, and made me a small curtsy. That’s when Nora spoke to me in surprisingly clear English.

“Sorry?” I said, giving myself a second or two to shape a reply. “Sure, of course,” I said. “It’s your country. Please.”

Not knowing whether it was more polite to bury my head back in my book or to make a further comment, I squinted out to sea and rubbed the sweat on my forehead back into my scalp. Was this girl thinking the same thoughts as me? How unfair that she be afflicted in such a manner, an affliction highlighted now as it was surrounded by hordes of mahogany-colored depictions of perfect femininity.

Nearby, one particular beauty commandeered my attention. Although her partner, if that’s what he was—a fat moneyed-looking guy, what was left of his grey hair tied back in a ponytail—fascinated me more. In his fifties at least, I studied him closely through my tinted lenses. I could see how the grey hair tied back into the ponytail relieved his baldness. He had the girth of a well-nourished hippopotamus, his enormous belly dripping over his shorts. The slate-gray shorts were long, the kind you’d expect a fat man to wear. He had a tan so deep he was chocolate-colored.

Contrastingly, the girl was svelte-like, lightly tanned, and had a blue butterfly tattooed on her right calf. Next to the girl, on a pink leash, was a little white dog I thought might be a shih-tzu.

Confused feelings of jealousy of the hippo and yearning for the girl, clashing with unfocused guilt over my lack of full compassion for Nora, pushed me from my sun-lounger and into the sea for a dip. The instant, voluptuous wetness and coolness of the sea washed through me. I submerged my head for a few seconds, the swilkering kelp brushed warm against my fingertips, and the rumbling sea pounded in my ears.

The entire section of the beach before me seemed to be looking my way when I surfaced.

Working my way round the colored shadows cast by sun-umbrellas sheltering family groups and couples from the blistering afternoon sun, the exposed patches of sand stinging the soles of my feet, I made my way back to my own temporary land-claim.

My social awkwardness, something I’ve never been too proud of, made my sun-lounger and blue beach-towel with its dolphin motif a riveting focal point as I worked my way around Nora and the two women with her.

About to attempt to get back into my book, the sight of the old woman lighting up a man’s black pipe convinced me that the characters around me were at least as gripping as those on the page.

Seated on a towel, her back supported by the rock-face, the old woman cupped the pipe’s bowl in her palm and drew in the smoke with the peaceable contentment of a bovine chewing cud. The rich, sweet smell of the pipe smoke mixing with the fresh sea air suddenly made me feel energized with joy; why? I couldn’t say.

The shrill yapping of a dog pulled me from a torpor I hadn’t realized I’d fallen into. My eyes adjusted before my understanding of the scene unfolding next to me.

Seeing the dog straining on its lead to get at Nora, the significance of the scene then hit me like an unexpected punch to the solar plexus. Nora, who must have left her long-legged stool to approach the shih-tzu, was being shielded behind the two older women who guarded her with the tenacity of matriarch elephants protecting a vulnerable calf from a wayward lion. The grandmother had placed her ample body in front of Nora, her arms stretched backwards and encircling the frightened girl’s waist, drawing her to her with such obvious ferocity, I could feel the depth of this woman’s love for her grandchild. In front of the grandmother, the girl’s mother reassured the contrite and clearly apologetic dog’s owner— he hippo’s mate—that everything was okay, and apologies were unnecessary. This I understood through her body language and animated facial expressions.

But everything wasn’t okay. Not for me anyway. I got it if nobody else did.

Since Jessica left me, and took the boys with her, I come undone easily. And witnessing this unfortunate girl, whose congenital deformity cast her outside all that is normal and acceptable by a world obsessed with perfection, being shunned by a tiny animal for much the same reason, struck me then as the most outrageous injustice I had ever encountered.

While the hippo, his chattel, and her dog settled themselves back into their sun-worshipping ritual, Nora’s mother returned and remonstrated with the old woman, who was beginning to inflate a yellow rubber ring for Nora by puffing into it. With the drama now died down, I stretched out in my sunbed, my open book across my face, and closed my eyes, allowing my inner vision to chase the scattered thoughts and images that led to my own unjust position in this world.

An unexpected gust of wind whipped the book from my face. I sprung into a seated position and watched uprooted sun-umbrellas tumbling down the beach, their owners in hot pursuit. The sudden and hysterical screaming and gesticulating by Nora’s mother and grandmother brought me to my feet. They were screaming and pointing out beyond the rocks at Nora being pulled out to sea, the yellow ring around her waist.

“Aiuto. Aiuto,” Help. Help, they screeched, the thin woman repeatedly bending her body in two as if suddenly afflicted with a crippling cramp.

Mezmerized, I watched the scene unfolding. But not until the grandmother grasped me around the forearm and pulled me did the paralyses that gripped me depart and allow my body to move towards the shoreline. Too late.

Thundering past me, a brown figure sprinted into the shallows and plunged into the water and was powering out to sea before my feet had reached the water’s edge. To the encouraging shouts of the now-standing crowd on the beach, he reached Nora, took hold of the yellow ring around her waist and towed her back to shore using an impressive one-arm stroke. The girl with the shih-tzu jumped up and down in a display of sheer delight. The little white dog beside her wagged its tail.

To the sound of unaffected applause and cheers, the hippo emerged, Nora cradled in his huge arms, smiles upon both their faces. I applauded too, the pure goodness of his actions left me breathless with admiration.

While the crowd gathered around them, tending to Nora, congratulating the hippo and patting his back, I gathered my things and made my way up the beach and towards the path that led to the hotel. An invisible man who had lost out on the chance to be a hero, I wasn’t even an anti-hero. Useless.

Steve Wade’s short story collection, "In Fields of Butterfly Flames," was published in October 2020 by Bridge House Publishing. His short stories have won, been placed and shortlisted in numerous writing competitions, along with being anthologized in over fifty print publications.