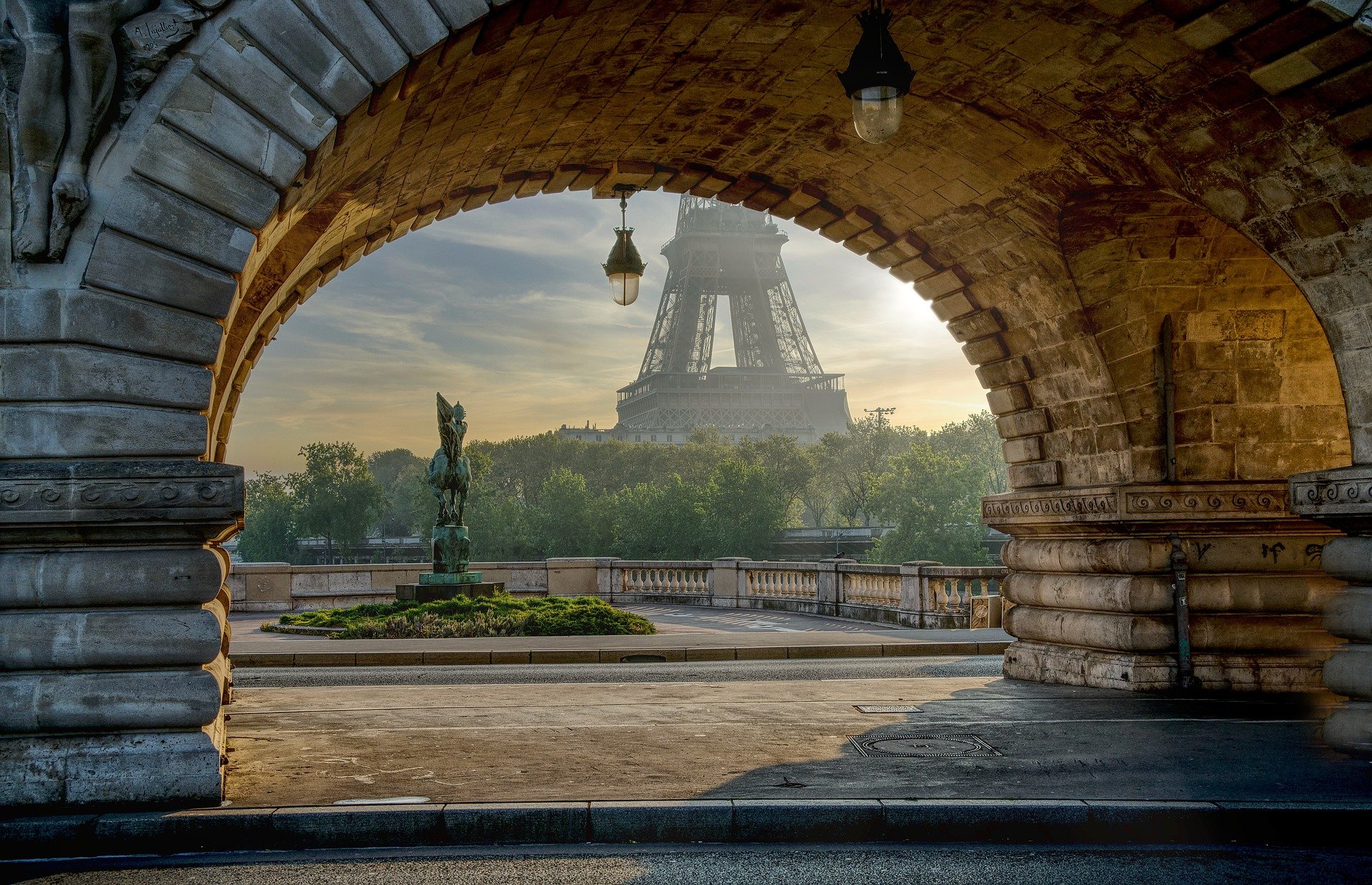 One Day in Paris

In a true story with a fairytale twist, a chance meeting in a coffee shop leads to a glamorous international adventure.

My heels clicked against the concrete floor as I walk. The wind was whipping against my face, making my hair stick to my cheeks. It wasn’t as warm as it was yesterday, and the clouds looked swollen and purple. Typical British weather. Why wasn’t I born and raised somewhere where the sun never sets?

My head was still banging from the night before. Too many Jager bombs, maybe. Whose bright idea was it to work on Mondays?

Coffee. The only way to solve this is coffee. I need some coffee.

“What am I doing?” I wondered aloud, much to the dismay of the elderly man who was walking in front of me. I’m sure he would’ve much rather walked in complete silence on his daily morning stroll. Still, I continued, “Why don’t good things happen to me?”

Maybe because I’m talking to myself in the middle of the street.

But I’m a good lady. I have a job as a healthcare assistant, I volunteer at the soup kitchen every now and then, I always give change to homeless people. I believe I do deserve for good things to happen to me.

Should I get a coffee from the Starbucks on East Street or take the longer way and get a well-deserved latte from the Pret on Commercial Avenue?

Although my heart lays with Pret, the pain in my right foot was telling me to take the shortcut and go to the nearest Starbucks instead.

My mouth was practically salivating at the thought of a nice hot coffee. I could hardly wait.

“Can I take your order?” the man at the Starbucks till said in a bored voice.

I sighed, “I’ll take a black coffee with one shot of espresso and five sugars.”

He rolled his eyes at me as he tapped at the screen in front of him. “Anything else?”

I shook my head no.

“Nicole, N I C O L E.” I spelled it out for him because they somehow always get it wrong.

He looked back at me with glazed eyes. “It’ll be ready in a few minutes. Wait over there please.” I walked to the waiting area where an elderly lady, her tall granddaughter, and a man with shoulder-length curly brown hair stood waiting to receive their order.

The man stood forward when my name was called and collected my order. Just as I was about to raise my arm forward in protest, he turned and collided straight into me, spilling hot coffee all over my blouse.

“Pardon, madame. I am so sorry,” he spluttered, immediately grabbing the entire container of napkins on the counter and attempting to dry me. I grabbed his hand as he was getting a bit too close for comfort. He had a peculiar Anglo-French accent. His arm was still in the air where I held it. He was staring intently at me. His hazel eyes burned into my own. I felt like I knew him already. “My name’s Ramone.”

He was quite good-looking. He had kind eyes and a nice smile. His long brown hair seemed to be damp, as if he’d just gotten out of the shower and was letting it air dry.

I don’t have the patience for that. The hair dryer is my best friend.

He had on a loose cotton shirt, brown chinos, and brown, weathered sandals. The dark stubble on his chin and full lips was totally the type of thing I normally go for.

“And yours is?” He held out his hand. Quite formal, I’m much more of a hug person, but I guess it would be strange to hug a stranger you’ve just met.

“Nicole.” His hand was warm and firm, as if he’d been working in the sun all day. His focused gaze and quizzical smile made me think he was just as curious about me as I was him.

“Well, Nicole, it seems I owe you a cup of coffee.” He handed me more tissues to dry myself with.

“Coffee isn’t good enough here anyway. Please let me make it up to you,” he pleads, his eyes showing genuine concern. “There’s a place in Paris that makes the best coffee in the world. We should go.”

He laughs and runs his hand through his hair. “Is that an issue?”

“So…it’s dangerous.” Was this guy serious?

“Life is dangerous regardless.” He continued to stare at me intently. “Don’t you want to experience something?”

I stood there contemplating. Well, about ten minutes ago, I was complaining about the lack of adventure in my life. It made sense to spice it up by disappearing with a beautiful stranger.

“How would we get there?”

“I have a plane,” he said in a matter-of-fact way, like it was a common occurrence for everyone to have their own aircraft.

“Of course you do.” I strained a smile at him. This was either going to be a complete disaster or the best day of my life.

I thanked God that I had lost my normal ID in a club three months ago, so I always carried my passport around with me.

His jet was sleek and professional. I lay reclined with my feet up on one of the chairs, a glass of champagne in one hand and a cookie in the other.

He told me all about his job and how he owned a French restaurant chain. I told him all about my not so “glamorous” life, which he listened to intently.

I ignored the fact that my break ended half an hour ago, and I still wasn’t back at work. Worry later.

Once we arrived in Paris, his chauffeur – I know, right? – picked us up and took us down to the central park, where Ramone insisted we be dropped off.

“Truth or dare?” he asked randomly.

He snorted. “Just pick one.”

“What’s the most daring thing you’ve ever done?”

“Dare.” He bit his thumb and looked around. “Come on, give me your wildest dare.”

The park we were standing in was gorgeous. The sun was shining. There were flowers of every color displayed in a beautiful shape. There were a few people milling about and officers standing guard in front of an exhibit.

“I dare you to steal one of those flowers,” I said, pointing to the flowers behind one of the guards.

His eyes followed my finger. He smirked. “D’accord.”

He ninja rolled across the floor, and I burst out laughing, immediately covering my mouth in fear of alerting the police officer. He crept behind the unsuspecting police and nabbed a white rose. Somehow, he managed to tumble straight into the officer’s legs, practically knocking him over.

The man looked startled and immediately turned red with anger and embarrassment when he realized what Ramone had done.

Ramone stood up and grabbed my arm. “Run!” he shrieked, smiling hard. I held onto him for dear life as we tore through the streets of Paris, laughing.

“You look angelic when you laugh.” He smiled, putting the rose behind my ear once we settled outside an antique Arabic coffee shop. “I owe you a cup of coffee, don’t I?

He stood up and guided me into the café with his hand on the small of my back. My chest fluttered a little bit, as if there was a cage of butterflies in there having a war.

“Thanks.” I felt more nervous around him now than I had when we first met.

An Arabic man appeared out of nowhere and jumped into Ramone’s arms with glee.

Ramone raised his eyebrows at me behind the head of the man, beaming equally as bright. “I’m sorry, Aahil, I’ve been very busy. Look who I’ve brought for you. She wants to have some of your famous coffee.”

The man hopped down from Ramone’s arms and peered at me closely. “Ahh, tres jolie!” He cupped my face with his hand and smiled. “On the house!”

He rushed behind the counter and whipped up a coffee concoction quickly.

I held it to my mouth, the scent almost paralyzing me with pleasure. “Wow…”

Ramone stared at me expectantly.

I took a sip. “This is the best cup of coffee I’ve ever tasted.”

The boys jumped up and down, squealing in happiness and holding on to each other.

“Of course not,” he scoffed. He held his hand out to me. “I dare you to come to Italy with me to try the best pizza.”

Nicole Mbaeri is currently a student who lives in the busy England capital, London. She's written a number of novels, both fiction and non-fiction and has been writing creatively since she was 7. This is her first published work.