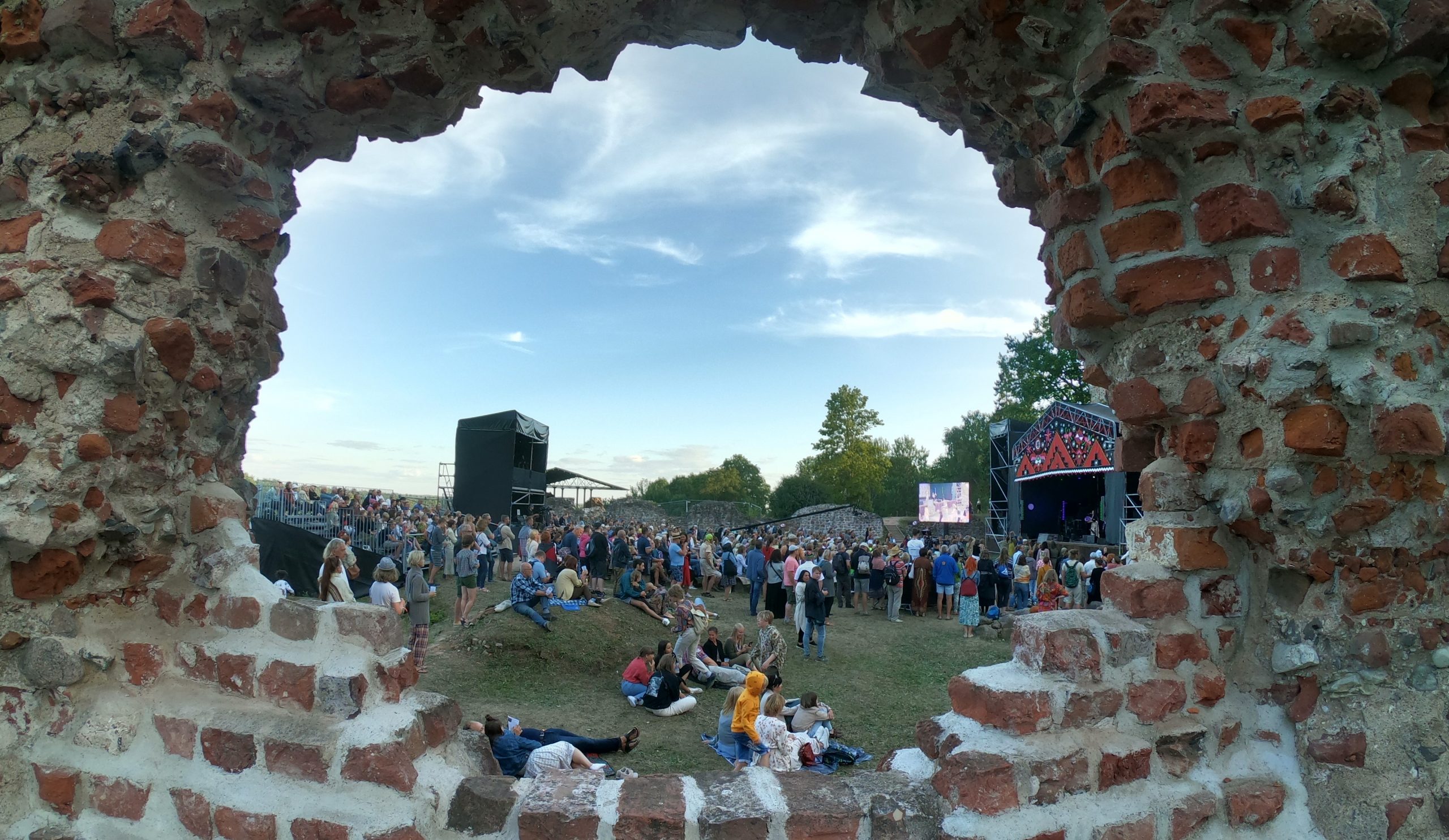 Forged in the Choir

By Thom BrownOctober 11, 2021Europe
No Comments

At the Viljandi folk festival, an English traveler is granted rare insight into the forging of Estonia’s national identity.

As the train traipsed its way out of Tallinn, Estonian summer hit us like, well, a train. We were quickly wrapped in the luscious green of the pine and birch trees, heading deeper into what I like to call “authentic Estonia.” The plan was to meet some locals in the town of Viljandi, home of an annual folk festival.

Having attended folk festivals in England, I was ready for some upbeat fiddle playing, crisp craft beer, and a little dancing. I wasn’t, however, prepared to get lost in the folklore and mythology of this tiny Baltic nation. Viljandi, it turns out, is the creative epicenter of Estonia; its songs the muse for its entire existence.

This was also the first event I’ve attended where the main attraction is listed as “the friendly atmosphere.” Only in Estonia is an immaterial concept considered a tourist attraction. They weren’t wrong, though. From the first squeeze of an accordion, the festival was nothing but open arms.

Viljandi isn’t a big town, even by Estonia’s standards. Given that its population stands at just 17,000, few tourists feel it worth venturing there. To put it into perspective, the attendance of the festival is generally well over 25,000. Many guests camp, but we opted instead for a small apartment, eight of us sleeping in a single room.

Naive, wide-eyed, and the only Englishman in a sea of Estonians, I tried to gain an insight into what the festival would be like. So far, everything seemed familiar: debates on whether to camp outside or sleep on the floor, a lost entry ticket. That kind of thing.

Our festival home was quiet, tucked away on a street that translates to ploughing, in reference to the town’s humble agricultural past. Estonia is mostly flat as a pancake, but Viljandi is more like a bowl of pistachio ice cream. In the city centre, a stage or food stall tops each hill, with festival sections divided by valleys and connected by bridges.

There’s also a network of crumbling red brick ruins—the ghostly remains of a 13th-century castle—twisting through the festival grounds. One still-standing structure is the Monk Wall. Battered and bruised by centuries of war, it stands stoically staring across the sweeping green hillocks, silent and still like a monk frozen in time.

Before the event, it felt as though I might not fit in at this festival, but as I ate my British chips, a Celtic band sang ballads from the British Isles. An Italian performer, Maria, spoke charmingly broken English, sang in Italian, and was accompanied by music with Albanian, Croat, and Roma Gypsy influences. Despite not being Estonian, Maria summed up Estonian folk for me. It’s outward-looking, cosmopolitan, and internationally inspired.

I was expecting choirs of blonde-haired, blue-eyed schoolgirls wearing woolen skirts and singing sweet melodies. What I actually received next was a heavy metal band called Metsatöll. They sing with a Viking-like intensity, using imagery from 13th century battles. Much of this can’t be translated directly into English, but it can be understood on an emotional level by just letting that wall of noise hit you.

My Estonian friends very kindly offered some information, regardless.

“This song,” one person explained, “is a song about that everyone has a song inside them, and they go searching for that song.”

I both completely understand and don’t get it at all. But this is deeply rooted in the Estonian psyche, something that will never be easily explained. Metsatöll has a song called Sutekskäija, which means werewolf. However, the Estonian werewolf tradition is so far removed from our Western mythology that it’s better translated as “one who regularly engages in werewolf business.” Right.

The music was epic, but I wanted to understand the origins of the festival. Launched in 1993, it’s said to be an expression of a unique, early 90s mindset. Estonia had only been a free, independent country for two years and was still healing from the trauma of Soviet occupation. Luckily, I had the opportunity to understand this better, having been invited to an intimate lunch.

We sat at a table filled with a vibrant vegetarian feast. To my left was the enthusiastic Tarmo, one of the heads of the festival. Opposite, a young Swedish, accordion-playing journalist and an older British man who was spending his summer touring Baltic music festivals.

“Why does Estonia have so many music festivals?” the Swedish woman asked, “For such a small country, you seem to have festivals happening all the time, and it’s all so well-funded.” She knew a lot more about the international music scene than I did.

Tarmo sat thoughtfully for a few seconds before responding, “I don’t know. I think we all grow up knowing how important music is to us and our identity.”

Having been occupied for most of its history, Estonia took a long time to discover its national identity. It began in the mid-18th century with the Estonian Awakening, when artists, musicians, and poets began to represent Estonia in culture. For the first time, citizens had access to the very concept of Estonia. By 1918, this led to them becoming a free, independent state.

Then, politics happened. The Soviets took Estonia as theirs and tried to extinguish this identity. While under occupation, coming together to sing was a way for the Estonian people to be just that: Estonian. The choir was their sanctuary.

“There were no Russians in the choir,” Tarmo said with a wry smirk.

In 1988, Estonians began hosting music festivals. First, there was the Five Patriotic Songs in Tartu, followed immediately by the Old Town Festival in Tallinn. Locals spontaneously formed human chains and started singing their identity back into existence. Over the next few years, these human chains grew, wrapping around radio stations and protecting them from oncoming Soviet tanks.

“Why didn’t the Russians stop them singing?” we asked Tarmo.

“Because they didn’t understand. They didn’t know the power of singing.”

In 1991, Estonian independence was restored, and not a single drop of blood was spilt. Artists dubbed this The Singing Revolution. More so than any other country in history, Estonia had proven that music is stronger than war. America’s origin story is a tale of guns, which is why the right to bear arms is so fiercely protected there. Estonia’s origin is a story of songs, which is why music festivals receive similar levels of protection. It’s also a story that lingers more recently in the memory, a story that was lived by anyone over 30.

Crammed tightly together with friends and strangers, I basked in the spiritual sounds of a band called Trad.Attack!. On stage, Sandra rocked out on a bagpipe as the ground shook to the beat of the bouncing crowd. Eerie sounds of archived voices oozed out of the speakers in time with the wild electronic folk melodies. The music wrapped me tightly like the greenery had as I took the train down to Viljandi. It was visceral, emotional, and somehow both archaic and futuristic. Anyone who’s attended a gig will have an inkling of the feeling, but there’s something about being a lone traveler transported into an unfamiliar culture that just hits differently. Like Estonia 150 years ago, I was experiencing an Awakening.

Estonia was a country forged in the choir. For my first full festival experience since Covid began, I couldn’t think of a more profound moment. Most of the time, I didn’t know what those bands were singing. But I felt the same passion they did.

In the single squeeze of an accordion, I learned more about democracy, freedom, and self-determination than a book could ever teach.

Thom is a digital nomad and world traveller. Since losing his job in Ghana due to Covid-19, he set up thombrowntravel.com to spread ideas on how world wanderers can embrace more sustainable, ethical, and meaningful travel.