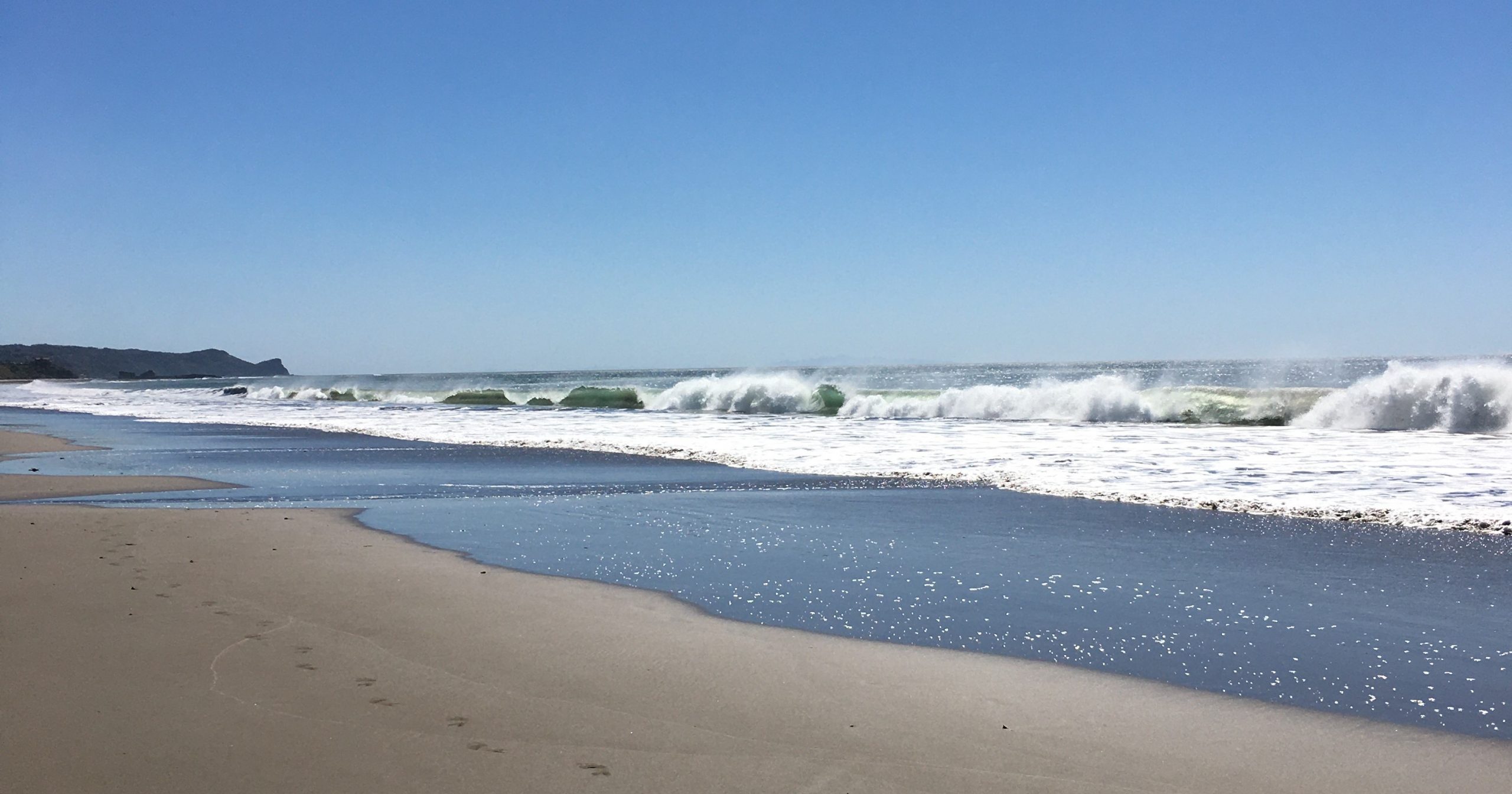 A solo traveler seeking out a few hours of quiet sunbathing doesn’t find the warm welcome she expects in a small surf town in Nicaragua.

The Pacific Ocean peeked through the wooden pillars of the open reception. Slashes of blue brighter than artificial coloured candy shone in between the furniture and the fringed hut and the silhouetted surfers swigging beer. Snooker balls chimed as they knocked into each other and music that makes people want to jiggy a shoulder (is that a genre?) softly swaggered from the speaker.

I threw my two backpacks onto the sandy marble and waited for my taxi. The dusty white beach lay the length of the horizon and the monster waves cried. A wave gathered momentum—rising above the ocean like the sky was a fridge and the wave a magnet—then it bit into the water’s face like a striking snake.

Popoyo is a quiet beach town with dirt roads and limited street lights and farm animals wandering about. It is hard to reach by public transport and phone signal rarely reaches 4G. No one goes out of their way to come here—especially non-Spanish speakers transiting the Spanish-speaking country of Nicaragua—unless they are keen to surf.

This was unbeknown upon my arrival in Surf Town, and I soon learned that surfers have a very exclusive club. No surf, no entry. No abs, no friends. No face slathered in a luminous coating of sunscreen like some sort of attractive summer ghoul, please, no welcome. A non-surfer in Surf Town is not only unusual, but downright unacceptable.

The boy stared at me like he was looking at a black hair floating on top of his pumpkin soup. He wore blue three quarter length gaping shorts and sliders with long white socks pulled so high no part of his legs were visible. He wasn’t flexing, yet he had a six-pack so defined it looked like a plasticine sculpture.

A few seconds passed before the boy’s teeth briefly flashed from the corner of his mouth as (one can only presume) he attempted to smile. It looked more like he bared his teeth. The luminosity of his dentition was amplified by his deep tan. He turned around and went back to cooking his eggs, and the smell of burning began to gas the kitchen.

“Why did you come to Popoyo if you don’t surf?” a girl had asked on the same day, studying me like I may have a mental dysfunction. She wore a red bikini so tiny it actually crossed my mind what her mother would think.

“I came to sunbathe.”

The girl stared blankly. Maybe her brain was that repulsed by what it heard that it just instantly scrubbed it from memory. Her black ponytail blew in the wind, and her green eyes glinted in the sunlight. I became transfixed in her eyes, fascinated by their changing colors as the sun disappeared then reappeared from behind the clouds. They sparkled the softest green in the light, making her irises stand out from her features like two jewels on a crown, then returned into a forest of deep emeralds. Her nose was decorated with a Milky Way of freckles, and her cupid’s bow was sharp and angular. Why is it that every surfer ever made is so good looking? Is that a requirement? Are ugly people allowed to surf?

“That’s funny,” she finally responded, her face deadpan. Her mouth opened, and for a second it seemed as though she was going to come up with an excuse to leave; instead, she just left.

I knew that not all surfers were rude and unfriendly, but the ones in this hostel definitely were. So on Christmas Eve, I decided to check out early and head for a rare slice of backpacker luxury: a private room in a hotel on a different beach.

I heaved my backpacks onto a shoulder each—resisting the urge to raise both middle fingers and scream a few absurdities at the surfers behind me—and strode over to the pebbly car park.

The taxi hadn’t arrived yet; there was only a boy in the car park, sitting on a motorbike while texting. Chickens clucked somewhere nearby. Waves shouted in the distance. Beginning to sweat as the weight of my luggage took its toll in the early morning heat, I turned back to reception.

The boy on the motorbike looked up from his phone and jogged over. He took my smaller backpack and gestured for me to follow him to his motorbike.

Now, I had no problem getting on the back of strangers’ motorbikes. My problem concerned the logistics. It seemed unlikely that this flimsy motorbike with no wing mirrors, revving black smoke, could stay upright and balanced carrying two humans and all my cargo on its back. The fact that the boy was about seventeen also didn’t aid the situation. But still, with no questions asked, I hopped on the back of his motorbike.

The boy drove with my smaller backpack wedged between us, my bigger backpack clawed onto my back. The backpack was so big it didn’t fit on the seat, but rather hung over the edge, clinging onto me for dear life, me clinging onto the boy for the same reason.

The boy with acne and dyed blonde curls turned to make intense eye contact as we revved along. He didn’t seem concerned about the oncoming traffic or the dips in the road or the fact that he was responsible for both of our lives and we were helmet-less.

“Inglaterra,” I shouted, pointing at the road ahead. He turned back. He did not slow down when the small pebbles turned into larger rocks or when a big chicken bus zoomed terrifyingly close to us or when I gripped his shoulders harder and let out a light scream. The boy drove like we were in the middle of a hit and run, zigzagging through irrelevant pedestrians and overtaking other motorbikes like he was playing a video game.

“How long you stay in Nicaragua?” he one-eightied once more.

“I’m not sure yet,” I raised my voice over the groaning motor. This time when I pointed at the road ahead, it wasn’t just for precautionary measures: a huge grunting pig shot out from the side of the road, nearly mowing us down, and the boy swerved at the last second. Unfazed by this near fatal miss, his reaction was merely a sniff of his nose, which he then wiped on his t-shirt.

The dust gathered in tornado fashion as we sped along. We were two participants in the grand prix, desperate for the first-prize trophy. As vehicles passed in the opposite direction, the dust enveloped us in a big, poor-visibility cloud, and a pebble darted into my forehead. The boy shut his eyes and turned his head to the side to avoid the dust. We were now driving on the wrong side of the road. With his eyes closed.

When I arrived at my hotel I made a promise that I would never get on the back of a motorbike with all my luggage and a driver under the age of thirty-five ever again. I paid the boy and watched in a weird mix of awe and disbelief as he raced off down the drive three times faster than when I was on the back. I entered the straw-roofed reception.

Palm trees lined the hotel pool, and white hammocks with elegant tassels dotted the shade. A fancy bar took center stage, and a pick-and-mix of cocktail glasses sparkled behind it. Spanish music softly tinkled from an outdoor speaker, and an unusual yellow bird that sounded like bubbles rising underwater tweeted in a nearby tree. My room wasn’t ready, so I picked a hammock and stretched out. It was a welcoming, surfer-less world, and I had it to myself.

Hannah Hughes is a Liverpool-based writing and travel enthusiast. She graduated from The University of Leeds with a degree in English Language & Linguistics, and during her third year completed a study abroad year at the Australian National University. During her time living abroad she backpacked through Australasia and South-East Asia, where she found her love for meeting new people, egg coffee, and crazy beach parties.