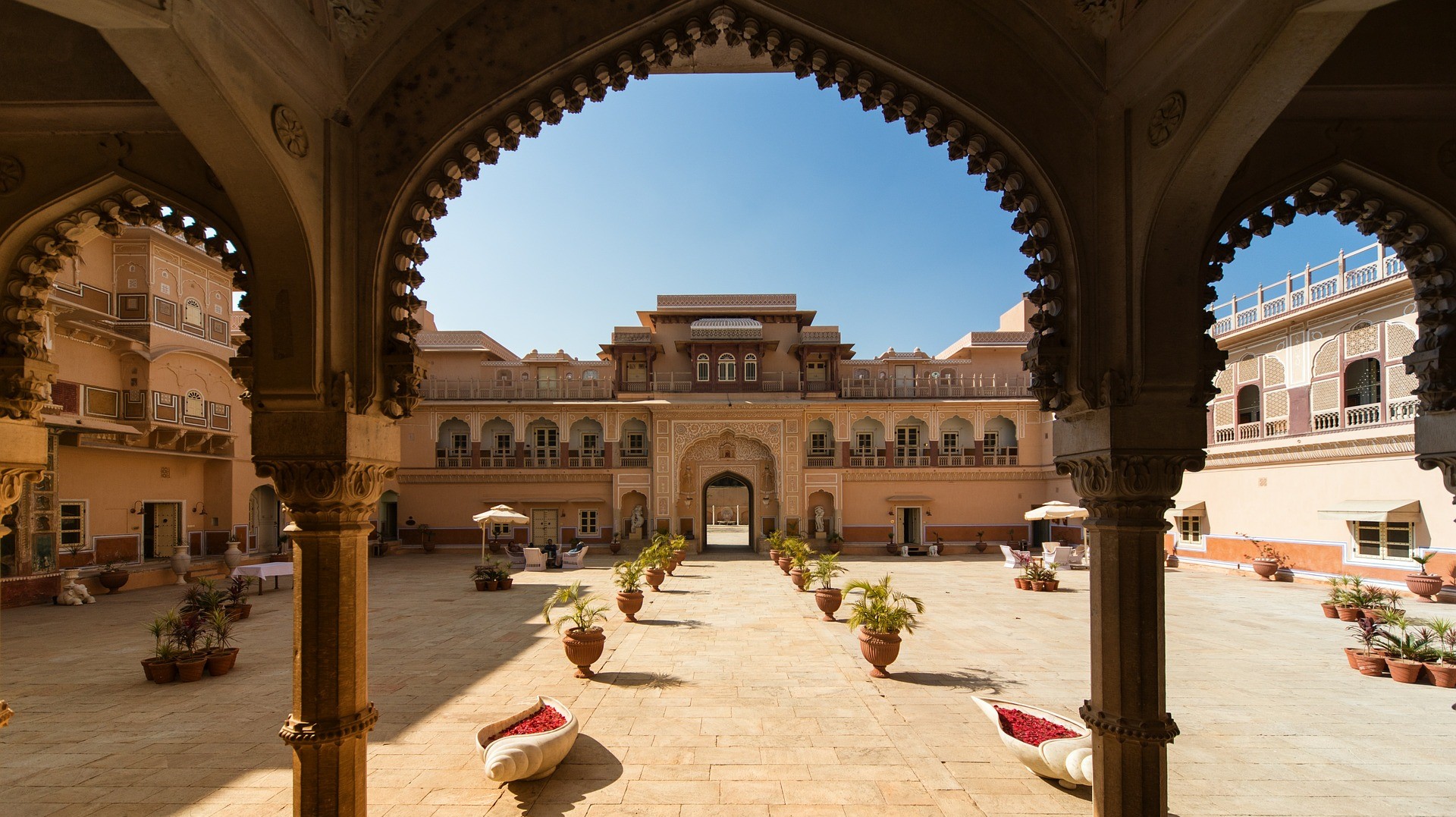 A woman finds a friend in a local tailor in India but struggles to connect with his assistant, a young girl from a nomadic tribe.

When my tour group arrived at Jagapur Palace, rose petals floated down and laced our hair from the archway above. A trio of musicians sat on a dais inside the entrance and serenaded us. The Rao, as the lord of the estate was called, greeted each of us individually in the gardens of his walled estate, overlooked by the castellation of a medieval palace. Carved wooden balconies, the wood bleached pale from the sun, broke up the stone façade. The gardens enclosed a swimming pool, where, on the first day, I sloughed off the privations of the overnight train.

This stay was the end of a busy tour of Delhi and Rajasthan. Now we were to enjoy a week of rest and recuperation in the luxurious palace in rural Rajasthan. The days quickly settled into a routine. Early morning was for yoga, or walks in the fields while monkeys hightailed it along the surrounding banks. Sometimes there were bicycle rides. The evenings brought dinner and entertainment. The days were left to us to enjoy at the pool or in the vast gardens and surroundings. The heat weighed heavily upon me. Even walking through the pillared passageways and across the courtyard for lunch left me gasping. When I wasn’t swimming and there was a limit to the time my northern European skin could spend in the raging sunshine, I sat in my room and watched the curtains move to the flow of the air-conditioning and reflected on the irony of feeling bored in paradise.

One afternoon, I left the palace and followed the track to the village. I came to a rutted road with buildings on either side that seemed to be only half complete. Occasionally, there was an open room where men sat around on chairs talking, but there was nothing that could be clearly identified as a shop. The end of the ribbon of buildings opened onto a square, where there was a compound containing parked lorries.

Both women and men strolled along carrying hoes and forks, heading for the fields beyond. There was a muttering behind me. I turned around to see a young girl shaking her head and gesturing at me. Words that were foreign to me rushed out of her mouth. The expression on her face was not friendly; rather, it was as if she were telling off an unruly child. She was not much bigger than a child herself, perhaps fifteen years old, slim and maidenly in a faded blue dress. She would have been beautiful save for a pallor that grayed her features, distorted as they were with the force of her argument. I stood for a moment while she spat her words at me, and then I shrugged and walked on. She followed me, ranting all the while until eventually, she fell back.

In the torpor of the long afternoons, I took to sitting in the hotel shop with Utti, the wife of the Rao’s son. She was a friendly young woman who managed the palace’s hotel business and its tourist shop. We sat in the open arcade, where occasionally a breath of air would rustle the wall-hangings. Jewel-colored silk cushions formed a tower, and kaftans arrayed the walls. Utti’s English was perfect, and she covered her mouth and giggled when I asked her if she had ever been to the U.K.

“No,” she said, as if such a thing would be outrageous.

I wanted to know why the girl ranted at me in the village. “Oh, some tourists dress immodestly,” she said. “Not you!” she laughed, forestalling my protest that I’d been well covered in a hat and kaftan that day. “Also,” she went on, “tourists photograph the village women without their consent, and that causes upset.” It was true that my camera had been visible that day.

Utti asked me about my life, and I told her about the vintage clothing business that I ran, the sourcing of the second-hand clothes, and remaking them for individual clients.

The following day we cycled to the next village. Utti was upright and elegant in her sari, while I sweated over my bicycle in the midday sun. There, under a fluorescent tube in a room with a wide doorway open to the elements, the tailor, Mr. Shiv, was bent over his sewing machine. Behind him sat the young girl who had shouted at me in the village. Her fingers flew as she corded a cushion, covering the cord with bias binding and attaching it all in one motion. She did not look up. Rolls of fabric stretched from floor to ceiling at the other end of the room.

“Where do you get your fabric, Mr. Shiv?” I asked. He glanced up from his work and said, “Sorry, madam. Very busy. Come tomorrow.”

On the cycle back, Utti explained that the truck from Udaipur was due today and that Mr. Shiv would be fulfilling a large order for a collection. I asked her about the girl at the workshop. “She’s from a nomadic tribe,” she said. “The Rao gave the tribe land so they could settle here.”  Utti shook her head.  “It hasn’t worked well.  They brew alcohol and let their children go hungry. The girl is lucky to have the job. One day she was in the village plaiting rope, and Mr. Shiv saw how quick she was with her hands. Now she can earn money to help her family. She would be in the fields otherwise, and the lives of those women are very hard. Come here, let me show you this.”  She stopped and wheeled her bike across the scrubland beside the road. I followed her to a flat area with rectangles of concrete set into the ground.

“See, these are their graves,” she said, pointing to tiny markings. “Look at the little holes drilled into the concrete. They come here and pour alcohol into the holes for their ancestors.” She threw her eyes to heaven. “They think they are honoring the dead by doing this” While we looked, a handful of children sidled up to us. They stood in front of us, rubbing their tummies and opening their mouths to mimic eating. Utti clapped her hands and remonstrated with them, and they melted away.

I went to the workshop the next day, and because I was made to feel welcome, every following day of my stay. I made myself useful where I could, threading the machines while Mr. Shiv laid the patterns and cut the fabric. I fetched rolls of thread and binding for the girl’s hand sewing, but she never looked at me. In the evenings, I loaded up my bicycle with cushion covers and caftans for the hotel shop, saving Mr. Shiv the journey. He was skilled with the different fabrics, and I learnt when to ask questions and when to be quiet.

One afternoon, I walked into the side room for a drink of water. The girl stood at the sink, gnawing at the skin of a mango that I had eaten earlier and placed in the bin. I withdrew before she could see me. Her bag hung on the back of her chair, and while Mr Shiv was busy at the table cutting fabric, I placed a five hundred rupee note inside it.

The next evening when I returned to the hotel after my visit to the workshop, I discovered the crumpled five hundred note in the bottom of my bag. It was the same note with the biro mark on the left side of its face that had caught my attention yesterday. It was the kind of mark that a bank teller would make while counting multiple notes. After that, I brought fruit and what food I could forage in the palace to the workshop and left it by the sink. Sometimes it was taken, and sometimes it wasn’t. If Mr. Shiv noticed it, he said nothing.

At the end of the week, on my last day at the workshop, Mr. Shiv pumped my hand enthusiastically. “Thank you, madam. It’s a great help, a great help.” The girl kept her head down, bending over the work. She looked tired, though her hands moved across the fabric compulsively. Any thoughts that I might have had about saying goodbye to her were stilled by her forbidding demeanor. As I reached the palace hotel, I realized that I did not know her name and, indeed, I had never heard anyone use it.

That evening, I took a stroll in the village before dinner. When I reached the square where I had first seen the girl, I took a moment to look around. There was no one there, save for a resting cow with its legs neatly folded under its bony body.

Ann Simm is Irish and now lives in the United Kingdom near the city of Liverpool. She is a member of Phoenix Creative Writers group, sharing short stories and poems. Her work has featured on local radio, and she has written for fringe theatre.