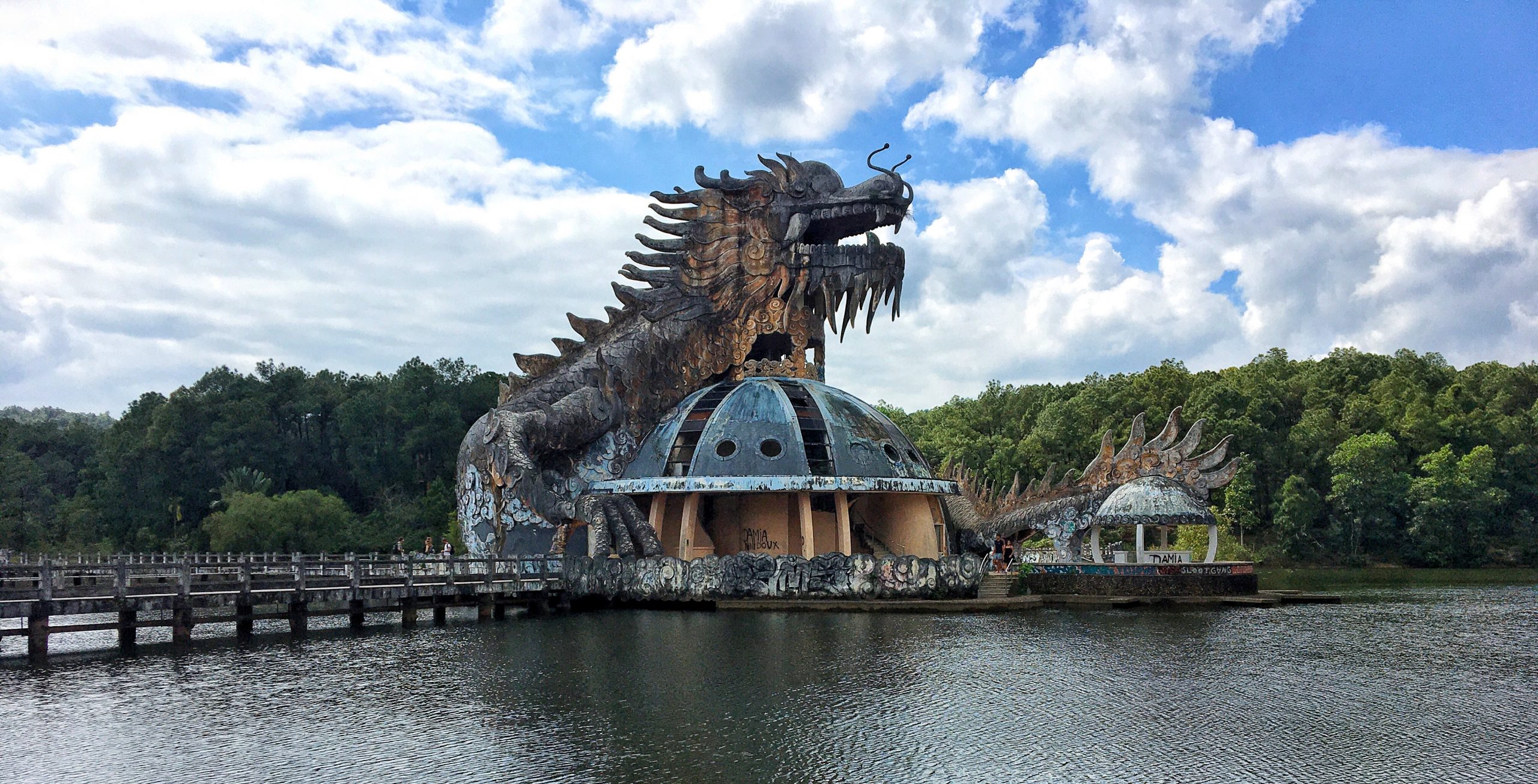 By Kayleigh PowellApril 20, 2022Asia
No Comments

A traveler in Vietnam sets her sights on an urbex she can’t pass up, with a three-story concrete dragon at its center.

My partner, Matt, and I heard the rumors as we were making our way north from Hội An along the celebrated Hải Vân pass. A three-story concrete dragon. An abandoned waterpark, supposedly overrun with crocodiles. An urbex (Urban Exploration) unlike anything you’d ever seen, protected by just a few unenthusiastic guards. As we cruised along, taking in the rolling green mountains to our left and the endless ocean to our right, we discussed logistics.

Our time in Vietnam was nearing a close — just a few days left on our visas, and no firm plans on how to spend them. Huế seemed as good a destination as any — the ancient imperial capital, the Vietnamese Demilitarized Zone, and now…the dragon. While we had had many wonderful adventures from Ho Chi Minh to Hội An and beyond, this was a real quest. It was too tantalizing to pass up, but what about the guards?

“What’s a reasonable bribe?” I shouted from the back of the motorbike.

Emboldened by our success with urbexing through hotels, decrepit roller rinks, and airplane graveyards in Thailand, we decided to make our attempt the very next day. Using an offline map sourced from a sketchy blog, we made it all the way to the chained and dead-bolted front gate, where two guards rested in the shade, languidly shooing us away with a hand gesture.

I had worked as a waitress for many years in NYC and had developed an alternate persona that I took on when dealing with difficult customers. She’s deliciously sweet and positive, and also incredibly stupid — if you’re mean to her, it will go straight over her head, never diminishing her sunshine disposition. I call her Summer. This was a job for Summer if I had ever seen one.

“Can we…buy tickets?” Summer persisted, with an implied wink and nudge, reaching for the pre-approved notes in her front pocket.

One guard worked his way up to standing.

“No tickets…” he began. Summer pouted adorably. “But…drive this way,” he muttered, with a sweeping gesture to a dirt track on our left. Summer beamed, and we took off.

After a few minutes winding through the web of bike trails, we found another two scooters parked amongst the brush. We followed suit and set off on foot. Almost immediately, we could see the mythical beast rising in the distance ahead of us. It towered over our heads, curled protectively around a pavilion at its feet (an erstwhile aquarium, if the sketchy blog was to be believed), and baring its teeth in an intimidating offensive display. The mouth was massive, clearly large enough for a person to stand in, and I was seized with a powerful urge to survey the broken landscape from between those cement fangs. The man-made lake surrounding it in every direction reflected its majesty, from the top of its horned head to the tip of its stretched and flexed tail. It was stained an array of strange colors, from moss, grime, rusting metals, graffiti reaching only as high as the tallest artist could reach, and god knows what else. It was magnificent. And it was occupied.

A band of four or five loud and argumentative would-be explorers were being escorted firmly out by a tired-looking guard in his sixties. He had definitely clocked us and had set his jaw in anticipation of our imminent interaction. We hung back, hoping not to be associated with these unfortunates. I traced the outline of the two separately rolled bunches of 20,000 dong in my front pocket, hoping it would do the trick.

Before we could properly mount our offensive, the guard was heading towards us: “I’m sorry. Closed.”

Okay, maybe Summer was the wrong tack. “Please, just 10 minutes?” I said neutrally, starting to bring out the rolled notes.

A stone-faced and weary look. “Sorry. Leave.” He began herding us back up the path with the kinds of hand gestures you might use towards misbehaving chickens.

“Ok, ok, no problem,” Matt muttered, hands up in defeat. We slowly headed in the direction indicated while keeping an eye on the guard, who mounted an ancient motorcycle and disappeared. Matt and I exchanged a look, assessing if we were on the same page, and without a word, darted back into the park in the opposite direction of the grumbling bike.

We entered into a strange game of cat-and-mouse, motivated less by fear of retribution and more by guilt at treating this poor man disrespectfully. It was clear that he had his hands full, but he dutifully continued attempting to remove numerous travelers with limited success. Clearly, the legend of this place had expanded exponentially, and it was too much for one aging guard to cope with. However, he continued circling constantly on his battered bike, intercepting urbexers, yelling and beeping his horn until they headed towards the exit, tailing them doggedly every step of the way.

Meanwhile, we immersed ourselves in the magic — a graffiti-covered dolphin training zone (“Beware The Crocodiles”), a gutted flight simulator, shattered steam rooms, sticker-covered water slides, ominous kiddie pools. It was so expansive that even the mammoth skull of our ultimate goal occasionally slipped away behind the tree line. It seemed to lay always just out of the corner of my eye, waiting expectantly for us to finally work up the courage for our final push to the summit.

After about 90 minutes of exploration and misadventure, we had had about enough creeping around, but we still hadn’t gotten to experience the main attraction. From a vantage point at the water slides, the imposing gray silhouette loomed behind the sparse pines, looking like at any moment it might snap into motion, tearing itself free from its long imprisonment. The mouth yawned cavernously, and from this height I could see it was filled with a riot of color — clearly a point of prestige for taggers, not just ourselves. The initial distance was covered by trees, but the final approach across the lake to the dragon itself would be totally exposed. We agreed to get to it as quickly as possible, enter through the belly, see what we came to see, stand in that damned mouth, and then abscond to the bikes before causing the old man any more distress.

The walk was uneventful, albeit tense, and eventually we broke into a jog as we crossed the water, heading for the safety of the dragon’s belly. Finally, reverently, we entered. Strange light filtered down from the cracked spine of the serpent, giving life to any number of leafy, tropical plants. Huge chunks of the wall had broken away, and the remaining surface had the appearance of some slowly rotting organism.

The graffiti became increasingly dense and elaborate as we neared the dragon’s mouth. Views through ornate windows carved along the neck allowed us glimpses of the lake and park beyond. Our surroundings now seemed to be mostly forest — just trees and the gently rippling lake. The dolphin zone lay at the far end, slumping into the waters, and I felt a hint of sadness for this strange, liminal space. I shook myself, trying to dislodge my distraction. Crunch time, remember? No sign of the grumpy guard yet. We exchanged an encouraging thumbs up before entering at long last into the jaws of the beast.

We stepped over a knee-high dividing wall and stood where its tongue would have been, gazing out between enormous, sharpened fangs covered in a kaleidoscope of colors. I spun slowly in place while Matt leaned out between the teeth, looking up towards the glaring eyes. I fired off a volley of quick photos, knowing we only had so much time to appreciate this moment in person. Matt laughed, slightly disbelieving. We had done it. The lake lay placid beneath us, the trees blew in the wind, and then…. Two large men in their 20’s, running. Behind them, inevitably, the guard.

We pulled back from the front of the mouth, hoping to avoid detection, but the footsteps and heavy breathing of the pursued were heading our way. The sounds ricocheted through the hollow structure, bursting the moment of serenity. Soon, they were delivered into the mouth.

“Guards coming,” one huffed in our direction.

Matt and I exchanged an irritated glance, ripped out of our bubble of celebration. This was NOT the plan. Instead of sneaking out quietly and avoiding further conflict, we were now being dragged directly into battle with unwanted bedfellows.

The guard arrived on the landing, once so calm and polite, now pushed beyond frustration all the way into rage. The boys stepped out to meet him, ready for war, as he shouted a mixture of Vietnamese and English, slapping the walls, seemingly on the verge of tears. I wanted to melt into the concrete.

“What are you gonna do about it?! Are you gonna fight me? We’re not breaking any laws!” The crescendo of voices continued into expletives, but slowly the combatants retreated down the steps. I prayed to whatever gods might exist that the guard would follow them, but instead, he stuck his head into the mouth, spying the two of us.

He stared, furious and disbelieving. “GO!” he boomed. “GO NOW!”

We scrambled over the dividing wall, down the neck, out between the claws, and across the lake as fast as our legs would carry us. I looked back just once, stealing a last glimpse of that monument to men’s folly. The dragon looked back calmly, unfazed.

We didn’t talk as we walked back to our bike. As we strapped on our helmets we both spoke at the same time.

“That was amazing, but-”

We grinned tiredly and drove back to the city, leaving the Dragon to its next pilgrims.

Kayleigh Powell is an erstwhile cruise singer, a slow-travel advocate, and a lifelong pasta enthusiast. When not writing about travel, she writes angsty songs on her ukulele and works as a VA and travel planner.