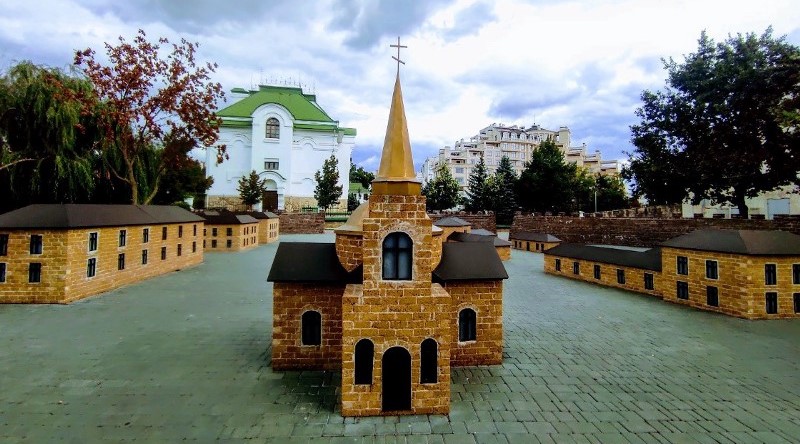 Transnistria: The Country That Doesn’t Exist

A trip through Eastern Europe lands a traveler in Transnistria, a country that doesn’t officially exist, causing her to question what actually defines a country.

Our hodge-podge of cars and people contrast starkly with the gray offices and terse expressions of the border guards. My friends and I are on a road trip through Eastern Europe in a beat-up people carrier, a van and a mobile home. We have been wild camping. We look and smell like hippies on their way home from Woodstock. So it’s no wonder that we get a few raised eyebrows as we roll up to the border early that morning. The police eye us suspiciously, wondering what mischief we are making in their corner of the world. “Where you go?” one asked. “Tiraspol, Transnistria,” my friend responds.

So begins the bureaucratic obstacle course of going from one country to the next. You know the one. You need to go to five different offices, in a specific order that no one wants to communicate to you. You are reprimanded by unsmiling guards, who only have to look at you to make you feel oddly guilty. You start sweating with anxiety and then sweat more when you realize that sweating makes you look even more suspicious. You wait for hours while officials pour over your documents. And then, eventually, you are waved through, and, with a sigh of relief, you pass into the following country.

I check my passport as we drive on. Inside, the officials have slid a slip of paper, which informs me that I can stay in Tranistria for 72 hours. It looks more like a school permission form than a visa. Here the guards aren’t allowed to stick anything in our passports. Officially, this isn’t even a border, and Transnistria is not a country. You couldn’t find it on Google maps. The UN does not recognize it. In the eyes of the world, Transnistria does not exist.

The last enclave of the Soviet Union

In a fight for this very existence, Transnistrians first declared independence in their tiny strip of land along the Dniester River, wedged between what is now Ukraine and Moldova. The year was 1991, and the inhabitants of the former Soviet republics were watching the USSR disintegrate before their eyes. In Tiraspol, the biggest concern is that they will be incorporated into Moldova and eventually into Romania. But on this side of the Dniester, people have their own culture, speak Russian, and have no desire to answer to Bucarest. So they announced their independence from Chisinau, resulting in a four-month war and 1,500 casualties. Moldova and Transnistria signed a ceasefire in July 1992, but never an amnesty. Since then, Tranistrians have existed in a sort of limbo, a frozen state of balance, not peace. Despite having border guards manning its frontier, despite having their own flag, media, police force and even their own currency, technically, this is still Moldova.

As we walk around the streets of Tiraspol, “frozen” is precisely the word that comes to mind. In time, that is, not temperature. “It feels like we’ve stepped into eighties Moscow,” I tell my friends as I look up at a looming statue of Lenin, proudly standing in front of the Transnistrian parliamentary building. Unlike elsewhere in Eastern Europe, where remnants of Soviet times have been pulled down, destroyed, or hidden in museums, here they are everywhere. Next to the national museum, filled with Soviet propaganda, is a wall celebrating Russian military victories since the second world war. The Transnistrian flag still bears the hammer and sickle. No wonder many people dub this the “last enclave of the Soviet Union.”

Locals are fiercely attached to this identity. That night, in a club, a middle-aged woman with brightly colored eye shadow and a t-shirt spelling out “Whatever” in diamante studs pulls me over to her table. “It’s my birthday! You have to drink with me!” she says. Her three kids are enthusiastically singing a karaoke ballad while her husband sits at the table, staring into his glass as if hoping he could drown in it and escape his boredom. “I’m Catalina! I’m 45 today!” she yells into my ear. Then she grabs the Moldovan beer I am drinking, throws it in the trash, and thrusts a shot glass into my hands. “Don’t drink that; it’s not right! This is Transnistria! You drink vodka! Vodka from Russia!”

To some, it might seem strange how people can cling to an identity that doesn’t really exist, but I understand. I have been a walking identity crisis ever since my parents moved to France from the UK when I was ten years old. I grew up torn between the two cultures, feeling like I belonged to both and yet to neither. The only identity I could genuinely relate to was that of European. So after Brexit, when I got my new passport, from which the terms “European Union” had been removed and the color changed from the European burgundy to the British blue, I cried. It was silly, just some words on a piece of leather, and yet somehow, it mattered deeply.

The inconvenience of inexistence

Not everyone is as patriotic as Catalina. While some locals are attached to their Transinistrian identity, others are frustrated with all the complications that come from living in a country that isn’t a country. Getting a passport is a bureaucratic nightmare, as most locals need to apply either in Chisinau or Moscow. There is hardly any cell phone reception because telecommunications companies refuse to put antennae in the contested region. Locals have to catch signal from far off towers on the Moldovan side of the river. Even getting money is complicated. The Transnistrian ruble isn’t officially recognized outside the region. International financial institutions refuse to work with the currency, meaning that a foreign card won’t work in an atm, and local cards don’t work outside of the region.

While I’m waiting in a long line at the money exchange, a smiley woman with striking doe eyes came over to me. “I want to practice my English,” she says. “Is that ok?” She tells me about how her husband currently works in the UK. The whole family had been planning on moving there, but then Covid happened, and then Brexit. So for now, they live separated by most of a continent. She is still trying to perfect her English, though, so that one day she can join him. She ends up coming to join my friends and me at a bowling alley called Smash! “I hate Transnistrian politics,” she says conspiratorily as we share a pizza and beers. “It makes everything so much harder, and there is so much bureaucracy! It’s not worth it just for some people’s nationalism.”

Do any countries exist?

Life here does not feel like a daily geopolitical struggle. It’s just normal life. People go clubbing and bowling. They sit on park benches. They haggle at the local market. They weave their way through bureaucratic red tape and try to make the best lives for their families and themselves. They hold elections to decide who will lead a country that officially is led by Moldova. They fly a flag that has meaning only for themselves.

The longer I stay, the more I think about what it means to be a country. After all, flags and money and democracies are always make-believe. They exist because we give them meaning. We chose to engage in the collective pretence that our countries and borders matter. All nations are illusions, mirages that slip away as soon as you question them.

After a couple of days, we drive back into Moldova. At a supermarket, I accidentally give a cashier a one Transnistrian ruble note. She laughs. “No, this isn’t real money,” she says. I smile and give her the correct currency. In my head, I am already hoping that one day I will return to Transnistria, a country which, when you think about it, is just as real as any other.

Eloise Stark is a freelance journalist who travels the world searching for stories. When she isn't noisily typing in a café, you can usually find her exploring remote communities or wild mountains.