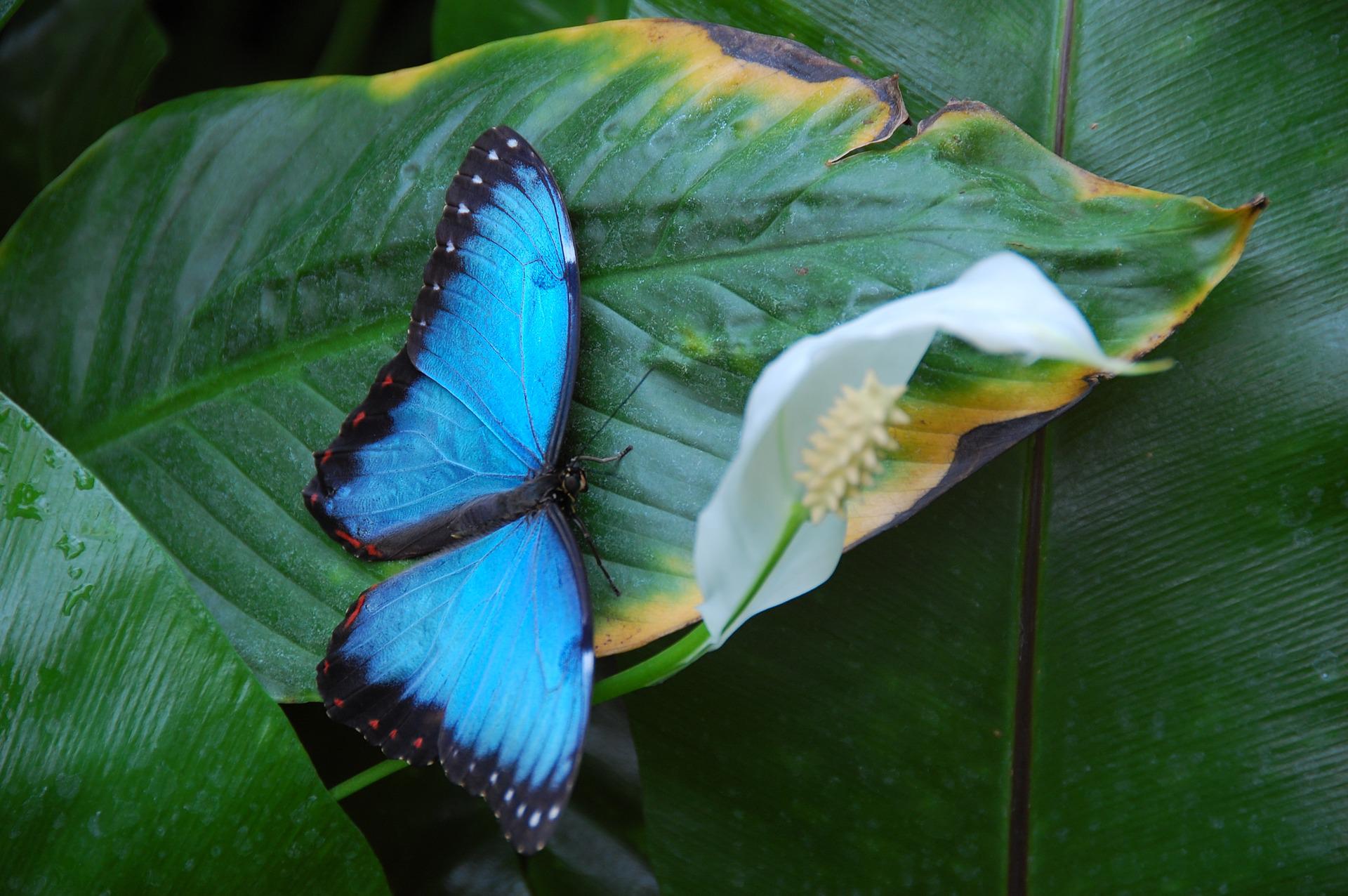 Moving to Survive: The Morpho Butterflies of Panama

A traveler finds a sense of understanding when she and her husband stumble upon the spectacle created by a group of morpho butterflies during a hike in Panama.

Four hundred feet above the column of ships waiting to enter the canal, we crossed the Bridge of the Americas to begin our winter escape in earnest. As Jeff and I climbed through steep Caribbean pines, rolled past arching ferns, and dropped into the sea of airborne palms in Almirante, I marveled that the rich landscape of Panama is ever eclipsed by something mortals made.

Our first stop was a week of snorkeling around Isla Bastimentos. Each day we plunged into the voiceless world of grazing lionfish and darting angelfish. Though accompanied only by the gentle ripples that smacked against my ears and the sound of my breathing, amplified through the tube, I did not feel alone. I felt at home among those who zipped and skittered below the surface.

On our last day on the island, I had just returned to my towel when a nose poked through the glassy surface. I sprung to my feet, then cut through the water as silently as I could to trail the large green sea turtle. My presence was no secret, however, and the creature wrenched his leathery rubber neck behind him occasionally as if to check my progress. When we arrived at a bed of tall, wavy seagrass, I remained at the fringes, sure danger awaited me inside the slowly swaying blades. My companion coasted smoothly through the flapping grass, stopping now and then to nibble while I pushed the water forward with my arms, then back again, making eddies with my legs, eggbeaters of resistance that labored to keep me stationary. “A lot of movement just to stay put,” I thought. “I get it.”

Before visiting Panama, my husband and I had already enjoyed extensive travel to six continents. We were the couple that was always on the move, even as—or because—our family remained stagnant at two. Years spent trying to get pregnant only to suffer recurrent miscarriage had tainted celebrations like Mother’s Day and Father’s Day, and the holiday season reminded us of what we did not have. Though I carried the hope of “Maybe by next Christmas,” each December was endured as another when only two stockings hung over the fireplace. During my first failed pregnancy, I had purchased for our would-be child an extra one, a long, stretchy, knit stocking that year after year collected dust in the rafters. Each Christmas I cursed my presumption and hastened the end of my once-favorite time of year. “The moment it is over, best to strip the tree and mantel,” I told myself. “Best to keep moving.”

As I tailed my ocean companion along the sea grass that December, I understood treading water, working all my limbs at once only to remain still. I could have done it all day. Eventually, though, the sky took on a violet sheen, and I trudged grudgingly back to our room. Tomorrow was the mainland, and while I was sure the forest would prove lovely, it would not be the confidant the ocean had been.

The next morning, we swapped the open water and jungle of the island for the open air fondas and forest of the Cocle Mountains.

On our first morning, a fleet-footed guide led us from the lodge down to the cascades near Cerro La Vieja. En route we were enchanted by a silent three-toed sloth and the elongated oropendola nests that hung from soaring, curled branches. The tidy, soaring falls were entrancing, too, and gave the appearance of bursting out the side of a tree-clad hill. We soaked up the familiar roar and enjoyed a bracing dip in the pool, made murky by the agitated soil. Reinvigorated, we laced up for the hike ahead.

Our newfound energy proved short-lived. The trail, the same we took down, felt almost immediately grueling. I had not noticed how steep it was, and though I wore a hat, the sun seemed to bounce off the ground straight into my burning cheeks. I watched Jeff for any signs of struggle. He smiled meekly, but his drenched “Birds of Panama” shirt and sweat-speckled baseball cap were impossible to miss. With a mixture of concern and bewilderment, our guide began to urge us on. “Close! Close!” We knew that was a lie. This was the path we had followed down; it had not shrunk for our benefit. I felt lame. And irritated. “I was never this hot on the island,” I thought. Tiny droplets snaked down my enflamed neck, and I cursed my surroundings. I eyed a cluster of large, grayish-brown leaves on my right. How any plant could wither in this sticky landscape seemed preposterous. “Close! Close!” I mustered a faint nod and pressed both palms against my searing thighs in a miserable effort to stabilize my gait. Another labored step had just crunched the loose ground beneath my boot when an explosion of color and flight brought my spaghetti legs to a halt.

In a flash, the grayish-brown leaves had erupted into electric currents of blinding cobalt. Like miniscule fireworks, the intense blues bounced through the air in a frenzied display. “Morphos!” the guide declared. Forgetting how depleted we were, we followed the butterflies with quick steps up the rugged trail, though I was certain we would not be able to keep pace. At times it seemed a lost cause, the bouncing shapes racing forward only to flicker and circle back behind us. We stopped, and the morphos instantly catapulted forward and idled, as if to beckon we weary visitors. We paused in a vain effort to predict their movement, only to find our necks zigzagging furiously. Jeff threw his head forward and cackled, and I giggled in spite of myself. After a few moments of frenetic propulsion, the manic creatures alit onto the dark undergrowth and silently shape-shifted back to dull and motionless. We stopped and waited, statues of anticipation. Our patience was rewarded when suddenly the sequence repeated itself, luminous flares of blue appearing and disappearing in a rapid, fluttering quest to addle predators. I smiled, and though I wanted to keep them in our company, I understood. They were moving to stay alive. In a final blast of silent pandemonium, the morphos again took flight and flitted off the trail, while we landbound watched. There was nothing left to do but continue up the summit in the quiet of reverence and thoughts of our soft bed.

That night I lay awake, listening to a pounding rain pummel the stucco sides of our small, simple room. I was strangely happy to be inside, happy to be in the mountains. A lightning bolt cracked violently and lit up the world behind our thin curtains. My thoughts leapt to the butterflies. I wondered where they might seek shelter. I was not sure they even needed to. Maybe, despite their delicate appearance, they were built for this ferocity. I had no idea. I was certain, though, that when the storm subsided, my morphos would once again be on the move.

Elizabeth is a proud former high school instructor turned writer. She has traveled extensively throughout six continents and resides in Southern California.