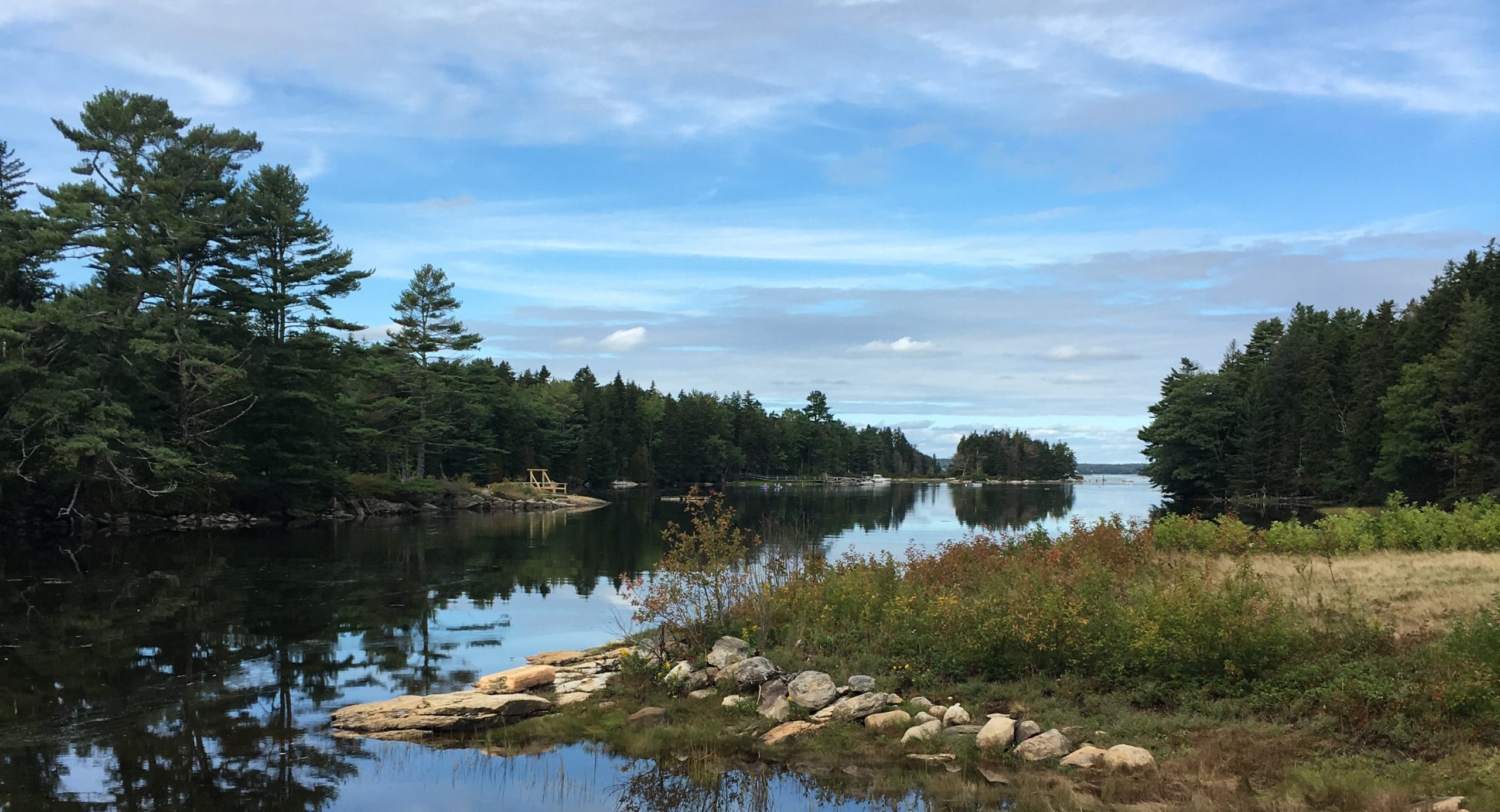 Your Roots Are Showing

A woman undertakes a cross-country road trip across the US to return to her childhood home to care for her aging mother. This story was chosen as the winner of the Wrong Turns travel writing competition.

Road Trip, 2016. Three thousand miles. Ten days. Asphalt unspooling like ribbons of old mix tapes. I pull into the driveway, slow and unsteady. I have returned to my childhood home, summer ahead of me, husband far behind. It’s not all lobster rolls and sailboats, though. I have responsibilities here, in this old island farmhouse, where every day is Freaky Friday, and I’m always the mom.

The swing beneath the chestnut tree is long gone, and so is much of the tree itself. With great sadness, I clipped its century-old wings last spring; the gnarled branches had entangled themselves amidst the powerlines like the twisted neurons that misfire in my mother’s brain.

Still, the tree is firmly rooted in place. Until two years ago, so was my mother, having lived in the same spot for nearly half a century. These days, she floats between past and present, dementia the constant reminder of life’s impermanence.

I know the feeling. As a kid, my father’s career propelled us from coast to coast; my parents never stayed anywhere for more than a few years at a time. Childhood memories are as ephemeral as my family life. Annapolis, a creamsicle from the ice cream truck. Miami, where I learned to count in Spanish. San Diego, first earthquake. When I was eight, we moved across the country to the small island in Maine where my parents had first met twenty years before. We were the odd family from “away”: oceanographer, artist, and their only child. Not long after, my father left the island to start another life, and my parents divorced.

I was the second runaway in the family. At sixteen, I left my mother and moved in with my boyfriend.

I didn’t return for many years. Like my mother in her 200-year-old house, the island seemed frozen in time, a remnant from another era. Most islanders could trace their roots back to the Mayflower, and most stayed put, venturing only to the mainland for lumber or snow shovels. My mother was content, sketching in her art studio. I wanted to live life without boundaries.

So I did, drifting between various jobs and schools, never committing to anything or anyone, drinking excessively for as many years as there are hours in a day.

I was not present for most of my life.

South Dakota, 2016. We pull off the interstate. For the last hundred miles, posterboard ads along the roadside have teased us closer to Wall Drug.

“All the years of business travel and never South Dakota,” I tell my traveling companion, Mel—Thelma to my Louise on this trip.

For most of my career, the nation was my office. Now, a new itinerary: a cross-country drive from my Arizona home to Maine in my old Ford Escape. Day One: The Petrified Forest, barren and sharp-edged. “I thought there would be trees,” Mel commented in disbelief. Yesterday, a hike through Garden of the Gods in Colorado Springs, air fragrant with hot sandstone and juniper. Tomorrow on Independence Day, we’ll watch the Mount Rushmore night sky sparkle.

But today, there is Wall Drug.

Like my trip’s end destination—that small island where I grew up, with its three-room schoolhouse and church bells that chime each morning—Wall Drug is also a relic, a mini-mall museum filled with props from the past. Dry goods store; ice cream parlor; mannequins in hoop skirts.

But the past is exactly that. And so, because my mother needed help, I quit my job. Because there was no one else. Because, like a mother’s love, I have learned that a daughter’s love is limitless.

“Caring for your mother is more work than people realize,” I say, unable to push away the endless loop playing in my head: tying my mother’s shoes; buttoning her shirts; reminding her to use a spoon, not a knife, with her soup; reminding her what day it is.

Mel nods. “It’s a different kind of work.” Her parents, both with dementia, passed away last year.

In the space before dementia, my mother drew fashion ads for department stores and sketched wildflowers. As years turned to decades, she became a local celebrity, parlaying a monthly newsletter into a book deal. Once, she played the piano in a top hat and tails on the Mother’s Club float in the Memorial Day parade. Once, she took a belly dancing class.

Once, my mother was witty and talented. Now, she is scared and forgetful. And she needs my help.

As I pilot the Escape through questionable neighborhoods, Mel snaps photos. An empty motel displaying a “No Vacancy” sign. Gleaming skyscrapers, foreground lined with rusty shopping carts. Graffiti-ridden garbage cans overflowing at the riverfront park. The incongruence of this city is haunting.

“Crazy time, last night,” says the cashier from behind his bullet-proof fortress at the liquor store where we stop for Cokes. “You seen the riots?”

We’ve been enjoying a news blackout this trip, oblivious to current events. As Mel scrolls her phone now, we learn about Pokemon Go; that Hillary’s emails will never die; and about the protest here last night, hundreds jammed in Campus Martius, the park we’d just strolled through, marching to denounce the fatal police shootings of Black men in Louisiana and Minnesota earlier this week.

Sometimes I’d rather be blissfully unaware. Like my mother.

I’ve always said having no roots gives me freedom to go wherever I want. I’ve told people I moved a lot because I thrive on wanderlust. I’ve told myself that, too, but it’s a lie.

At age 35, between waves of awe and nausea, I realized I’d moved more times than years I had lived. Across the country, across the street, across town, across the ocean. All I had to show was a footlocker of belongings and a job in dental insurance.

Age gifted me with wrinkles, sobriety, and wisdom, and this I know now: All those times I moved was to escape myself.

Maine, 2016. It’s been decades since Mel and I have spent more than an afternoon together. Even as neighbors, our friendship was just a blip on the radar of my rootless life. But this road trip together—through prairies and cornfields, Great Lakes, Niagara Falls—cemented the dementia daughterhood bond.

“I just want my mom to be in a better place,” I say as we pass the now-shuttered Pepsi-Cola bottling plant where Mel’s husband and I used to work. “Is it wrong to want her to die?”

“I used to want that, too.” Mel turns away from the window. “But the moments that you’re with her? They matter to her. Even if she forgets in five minutes. Who are we to say living in the moment isn’t a better place?”

On the road everything is different: my thoughts, hopes, the stories I tell myself. And now, after the unexpected end to a twenty-five-year career, I am home. To care for my mother. To root myself in the quagmire of her dementia, as unavoidable as my own self.

My mother passed away during the pandemic. I have inherited the old house and enough sorrow to fill the cove that surrounds it. And I have inherited her passion for writing. Her aura permeates every barnboard bookshelf, every cedar clapboard.

This house, this cove, and these woods are home, and the island is my mother’s love. Where the spindly branches of the backyard crabapple trees hold me in their embrace. Where the sea, like her soul, surrounds me. The house has a heartbeat: it is hers.

All my life, I have searched for home, Dorothy lost in an Oz-like existence. And I have come to realize that this vision of home as a physical place lies within my own flawed conception, not my family’s rootstock.

As I summon the muse of my mother, who appears often when I am in her old island studio, I begin to understand how words and home are rooted together. How they flow like the brook from the backyard into the cove. How I am merely their conduit from heart to page. How they happen in a place not always confined to a geographic location. How, like a mother’s love, they always, always, start in my heart.

Amie McGraham grew up on an island in Maine. Her writing has appeared in anthologies and literary magazines. She is currently writing a novella-in-tweets and enjoys not always finishing the story.