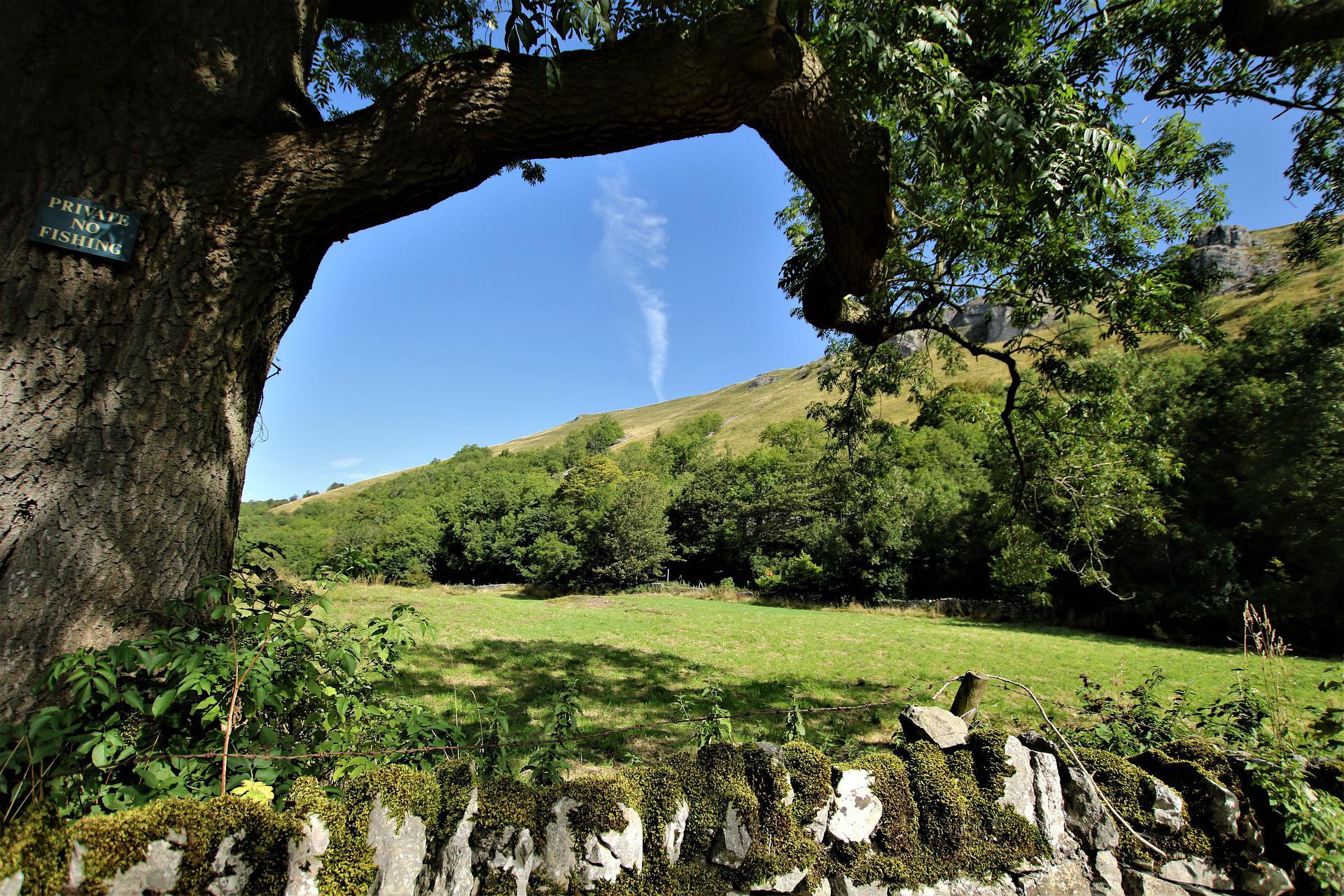 Ambergate Chestnuts in the Peak District

A couple hiking near Ambergate in an English National Park stop to ask for directions and come upon a grandfather and his elfish grandson.

“Trespassers, trespassers,” the trees whispered, so faint the words caught in the wind, trapped between fantasy and reality.

I imagined elves and gnomes lurking in the dark recesses of these ancient woods, on the edge of the Peak District, England’s first national park. Did an army of storybook creatures patrol the forest, scaring walkers with their sturdy shoes away from the trees and trails?

The crack of a branch and the murmuring of human voices broke through the illusion. Standing at the base of a muddy hill, near the village of Ambergate, my husband Keith and I considered our next move. A split in the trail puzzled us, and Keith turned toward the voices, moving up the hill for directions. I remained where Keith had left me, thinking assistance would be given, and we would be on our way within seconds, continuing our hike among the hills and villages of central England.

Drops of lazy rain hit my head. Water bulged from the gray cape hanging over the sky, threatening to spill its contents. Keith’s conversation continued and continued, drawing me to the top of the hill.

A man, leaning on a walking stick, was giving Keith directions. Splotches of red decorated the man’s cheeks, and white streaked his thick thatch of hair. A short distance away, a boy studied the trees. He moved through the trunks and branches that almost touched the ground. His bottle-bleached hair gave the day an unwelcome modern touch.

“My grandson thinks of these woods as his own,” the man was saying as I approached. That explained the whispering I had heard earlier. I looked over at the boy, but he remained oblivious to my attention, more interested in the nature surrounding him—an elf-boy raised by humans.

The grandfather told us that he and his grandson were picking chestnuts to roast. In a chatty, unfocused way, much like the muted greens, browns, and greys of the forest, he described a trip he and his grandson had taken to Florida. It hadn’t been to his taste. “Much too flat,” he said.

He peeled a chestnut and popped it into his mouth, then offered one to Keith and me. I chewed the nut slowly, its meat rolling over my tongue. It tasted bitter, but because the chestnuts had come from a charming gentleman, who shared my love for woods and walking, I couldn’t think of a sweeter snack. We stared at each other in a comfortable silence, as though we had known each other for years, and I halfway hoped he would invite us back to his house for the roasting, but the day was moving on.

Other walkers came down the hill. A couple we had seen earlier waved, breaking the spell. The magic slipped down the muddy slope, and I knew we would soon be on our way.

Thanking the man for his help and the chestnuts, Keith and I turned to go, and it was then that the boy finally spoke. “Not all Brits are as boring as this one,” he said, nodding at his grandfather. I cringed but didn’t turn around, trudging forward, as though the elf-boy hadn’t spoken.

Keith said something like, “Oh, nice grandson.” And the grandfather replied in a resigned voice, “Just like his mother.” Still, I didn’t turn around, so I don’t know what shadows of hurt might have crossed the man’s face.

What I do know is that one day the elf-boy will no longer have bleached hair, and he will walk the woods alone. Lines will crisscross his face, and he will clutch a walking stick. It will be during these solitary hikes that he will remember his jolly, Florida-traveling, chestnut-hunting, long distance-walking grandfather and wish to once again scramble about the woods with his dear granddad.

It is during these moments that he would turn back the hands of time and tell an American couple he encountered years and years ago that his grandfather was the most interesting Brit around.

Erin Fanning splits her time between the mountains of central Idaho and the lakes of northern Michigan. When not writing or reading, she can be found skiing, biking, kayaking, or hiking, depending on the season. Visit erinfanning.com for more information about her writing.